Missouri Gov. Eric Greitens remains defiant, even amid calls for impeachment or resignation, after a St. Louis grand jury indicted him for felony invasion of privacy, alleging the Republican took a compromising photo of a woman during an extramarital affair the year before he was elected.

St. Louis Circuit Attorney Kim Gardner on Thursday announced the indictment that followed an investigation launched in January, a day after Greitens admitted to an affair with his St. Louis hairdresser that began in March 2015.

Greitens released a statement saying he made a mistake but ‘did not commit a crime.’ He accused Gardner, a Democrat who was also elected in November 2016, of playing politics.

‘With today’s disappointing and misguided political decision, my confidence in our prosecutorial system is shaken, but not broken,’ Greitens said. ‘I know this will be righted soon. The people of Missouri deserve better than a reckless liberal prosecutor who uses her office to score political points.’

The Missouri GOP appears to be standing by Greitens, releasing a statement on Friday that accused Gardner of being a flunky for liberal billionaire George Soros.

‘Kim Gardner has received more than $200,000 from George Soros groups,’ said Sam Cooper, executive director of the Missouri Republican party. ‘Missourians should see this for what it is, a political hit job.’ 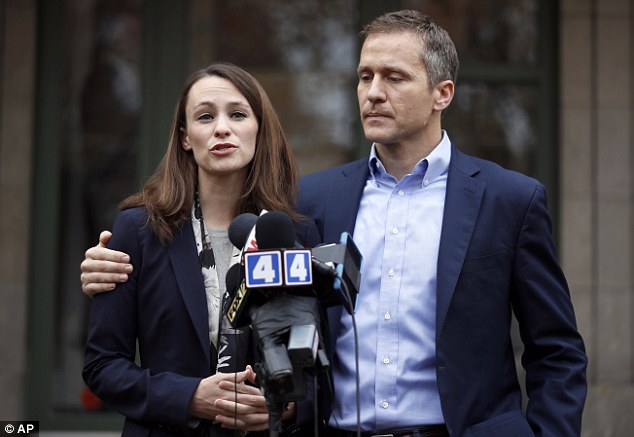 The married father-of-two, 43, is accused of taking and sharing a naked picture of his mistress. He is pictured here with his wife 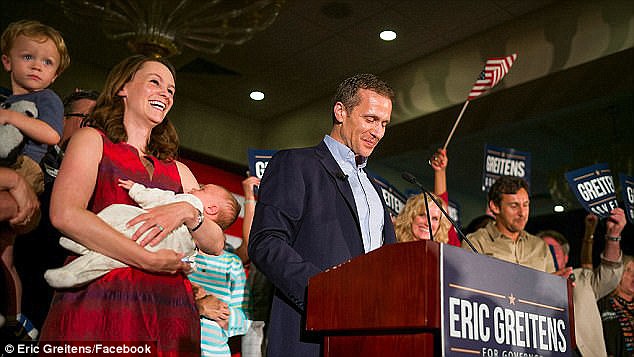 Greitens is pictured with his family during a campaign event in August 6, 2016. He admitted to having a sexual relationship with the unnamed woman in March 2015

He continued: ‘This law has never been prosecuted in this way and it is safe to say if Eric Greitens wasn’t governor, it wouldn’t have been this time either. We have a progressive anti-law enforcement Democrat wanting to single-handedly oust a law-and-order governor.

‘We look forward to a bipartisan committee of legislators elected by people across Missouri to find out what’s really going on – ensuring St. Louis liberals aren’t controlling the future of our state.’

Gardner’s spokeswoman, Susan Ryan, responded: ‘Despite the Governor’s personal attacks, the Circuit Attorney believes the courtroom is the appropriate place to argue the facts, not the media.’ 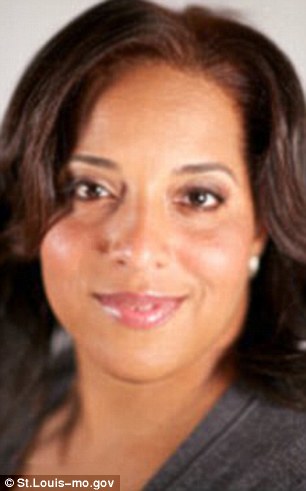 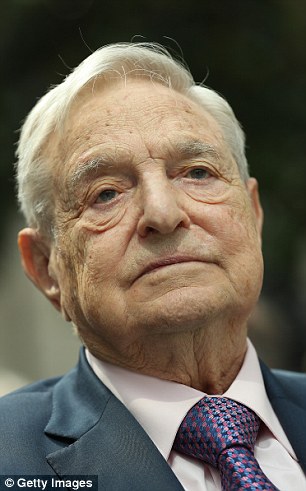 The Missouri GOP appears to be standing by Greitens, releasing a statement on Friday pointing to the $200,000 that St. Louis Circuit Attorney Kim Gardner (left) has received from liberal billionaire George Soros (right)

Greitens canceled plans to go to Washington this weekend for the National Governors Association annual meeting. In a statement Friday, the Republican Governors Association said Greitens informed the group he would stay in Missouri ‘to fight back against what his team has called a baseless charge.’ The group said Greitens also ‘no longer intends to serve’ on its executive committee.

Greitens’ attorney called the indictment ‘baseless and unfounded.’ Attorney Edward L. Dowd Jr. filed a motion to dismiss the indictment on the grounds that any relationship with the woman was consensual.

A few lawmakers from both parties suggested that Greitens should consider resigning, just as they did after he admitted to the affair on January 10.

House Republican leaders announced they were forming a group of lawmakers to investigate the charges ‘and answer the question as to whether or not the governor can lead our state while a felony case moves forward.’ Dowd said the governor welcomes the review. 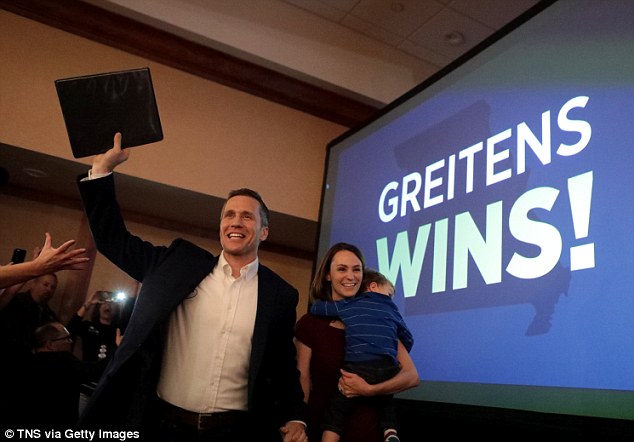 Greitens emerges as winner of the Missouri governor’s race on Nov. 8, 2016. Following his affair, his wife Sheena (right) chose to stick by his side 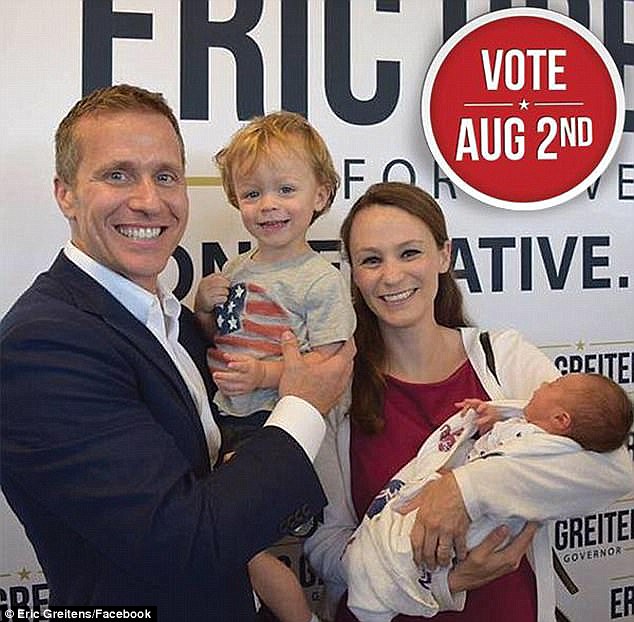 The governor’s former mistress claims he slapped her during an encounter in the same hospital where his wife was giving birth to their child. The family man is shown during his campaign in July 26, 2016

The joint statement from House Speaker Todd Richardson, Speaker Pro Tem Elijah Haahr and Majority Leader Rob Vescovo did not specifically mention impeachment, a process that must begin in the House with an investigation.

But for some lawmakers, impeachment is on the table.

‘Gov. Greitens has to go,’ Democratic state Sen. Jamilah Nasheed of St. Louis said. ‘Missourians thought they voted for a person of character and integrity, and instead they got a liar and alleged criminal.’

Greitens, 43, has frequently vowed that he won’t step down. He indicated Thursday he intends to stay and fight.

‘This will not for a moment deter me from doing the important work of the great people of Missouri,’ Greitens said in the statement.

The indictment states that on March 21, 2015, Greitens photographed a woman identified only by her initials ‘in a state of full or partial nudity’ without her knowledge or consent. The indictment said Greitens ‘transmitted the image contained in the photograph in a manner that allowed access to that image via a computer.’

Soon after the affair began, the woman’s husband secretly recorded a conversation in which she described the alleged incident. She said on the tape that Greitens invited her downstairs at his home because he wanted to show her ‘how to do a proper pull-up.’ 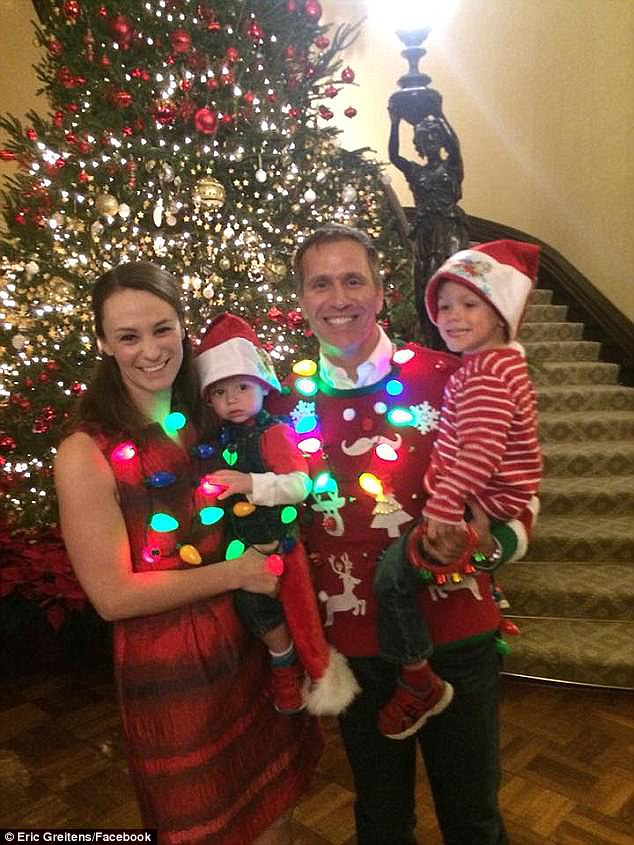 An investigation was launched in January after Greitens admitted to a March 2015 affair with the unnamed woman. He  is pictured wearing festive sweaters with his family on December 5 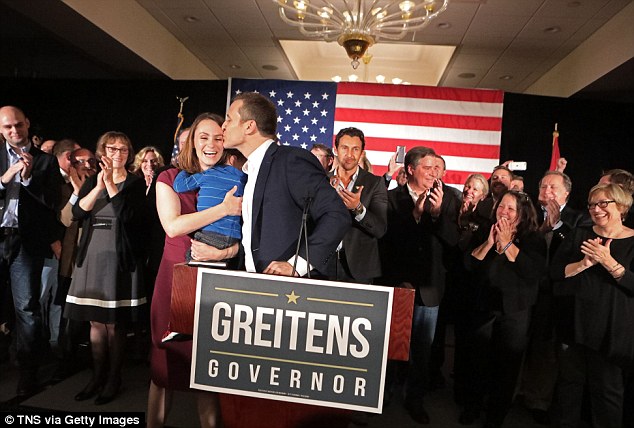 The woman’s allegations became public last month, when KMOV aired an interview with her ex-husband, who recorded a conversation with his then-wife where she discussed the affair. Greitens was elected governor in November 2016

She said Greitens ‘taped my hands to these rings and then put a blindfold on me,’ took a photo of her partially nude, and then warned her to remain silent.

‘I saw a flash through the blindfold and he said, ‘You’re never going to mention my name,’ she said.

Greitens was taken into custody in St. Louis and released on his own recognizance. He is due in court for his first hearing on March 16, before Circuit Judge Rex Burlison. He could face up to a four-year sentence if convicted.

The statute of limitations for invasion of privacy in Missouri is three years, which means it was due to expire in less than a month.

Ryan, asked if additional charges could be filed, said the matter is still under investigation. Several lawmakers were questioned last week by investigators from Gardner’s office.

Greitens, the father of two young boys, came into office as a political outsider, a brash Rhodes Scholar and Navy SEAL officer who was wounded in Iraq, emerging as the winner in a crowded and expensive GOP primary.

A former boxer and martial arts expert, he has embraced the role of maverick. He responded to a Democratic attack ad in the fall of 2016 with one of his own in which he fired more than 100 rounds from a machine gun as an announcer declared he’d bring out ‘the big guns’ to fight Democratic policies championed by then-President Barack Obama.

Greitens surprised many experts by defeating Democratic Attorney General Chris Koster in the November 2016 election. Some saw him as a rising Republican star with potential presidential aspirations.

But governing hasn’t always been easy, even though Republicans now control both houses as well as the governor’s mansion. Greitens and GOP lawmakers have often clashed, with him comparing some to third-graders and labeling them ‘career politicians.’

He has also faced questions about so-called ‘dark money’ campaign contributions and criticism for stacking the state board of education. His use of a secretive app that deletes messages is under investigation by Republican Attorney General Josh Hawley.

Greitens’ charity, The Mission Continues, faced scrutiny during the campaign when Democrats accused him of insider politics for accessing the donor list to raise about $2 million through its top contributors.