More than 125 people have been arrested at Notting Hill Carnival on Bank Holiday Monday as the festival kicked on for its second and final day.

Twenty-five blades were seized as police rolled out the use of ‘knife arches’ at the event for the first time in its history to clamp down on the amount of weapons being sneaked in.

Brazen festival-goers were pictured openly taking drugs in front of officers as they partied in the streets of west London for the second day in a row.

The Met Police told MailOnline that as of 5.45pm on Monday there had been 125 arrests; Four for assault on a police officer, one for drink driving, 25 for possession of an offensive weapon, one for theft, 68 for drug offences, two for sexual offences, one for robbery, six for psychoactive drugs, one for assault and 13 for ‘other crimes’.

The number is likely to rise and surpass the 133 arrests made at the carnival yesterday as revellers party late into the night. The Met Police told MailOnline that as of Monday afternoon there had been seven arrests over the day; One for drink driving, three for possession of an offensive weapon, one for ABH, one for drugs offences and one for immigration offences 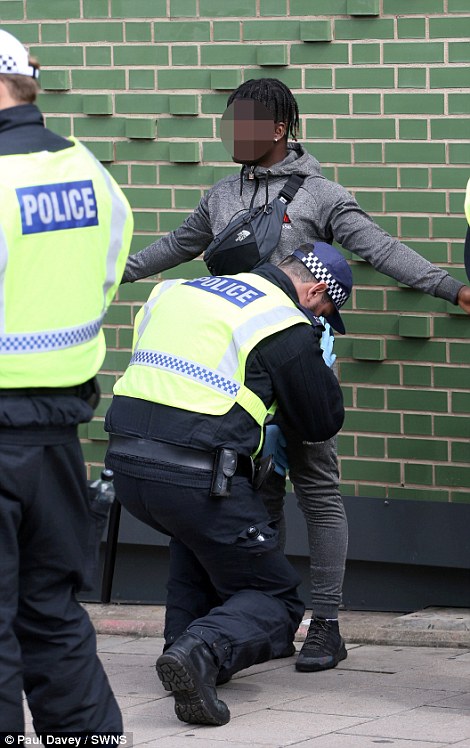 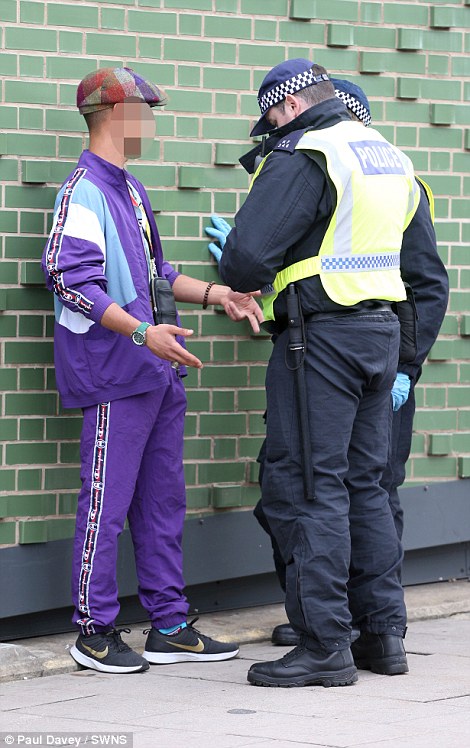 Police are operating with enhanced stop and search powers in a bid to crack down on violence. Scotland Yard said it would also be imposing a Section 60 order across the carnival’s geographical area between 9am and 11.59pm on Monday 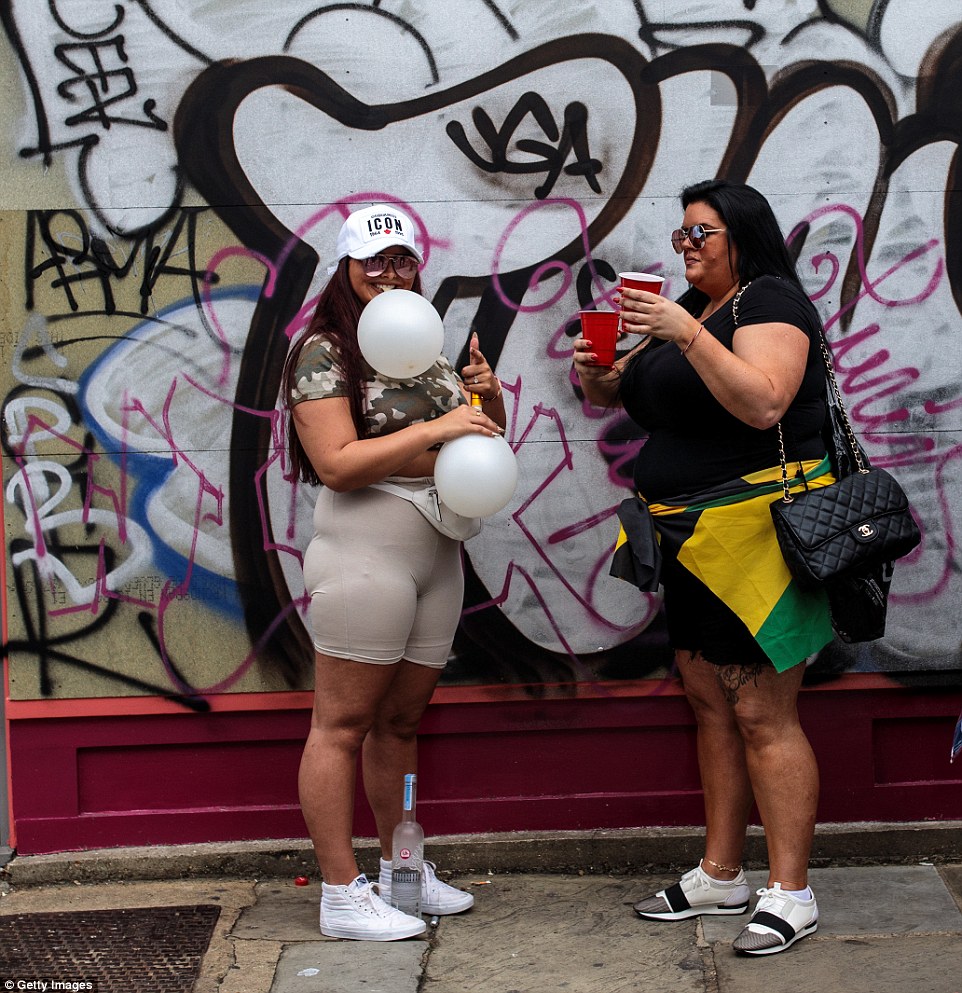 Police made 133 arrests and recovered 16 knives at the Notting Hill Carnival yesterday, Scotland Yard said, with officers (pictured on Bank Holiday Monday with a bag of empty NOS canisters) gearing up for another day of festivities today 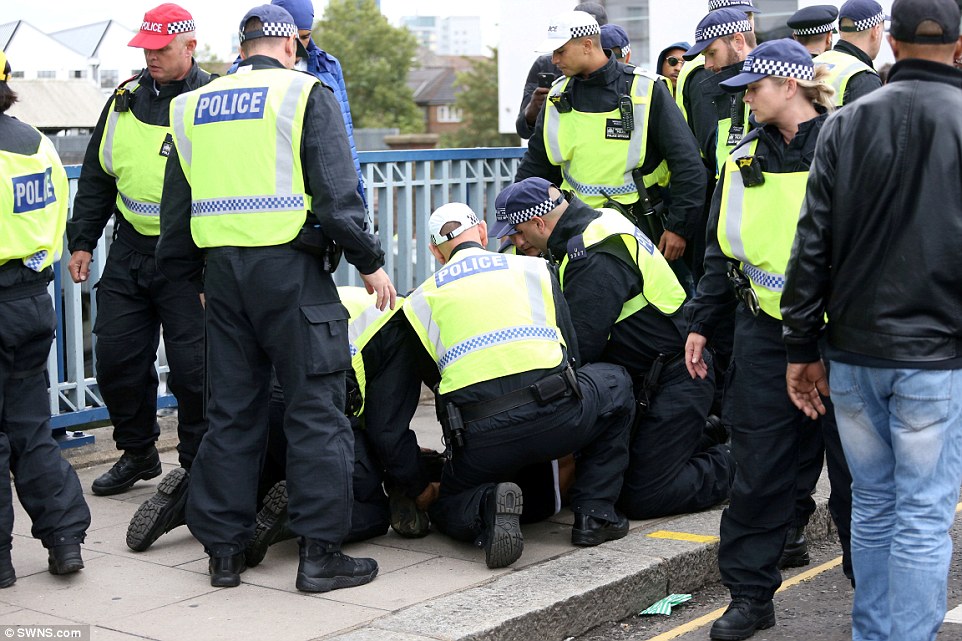 There were 133 arrests made at the festival on Sunday with 16 knives seized. Pictured: Police make an arrest after tackling a man to the ground The weekend event is being policed by the highest number of officers in six years, with even more on the streets today 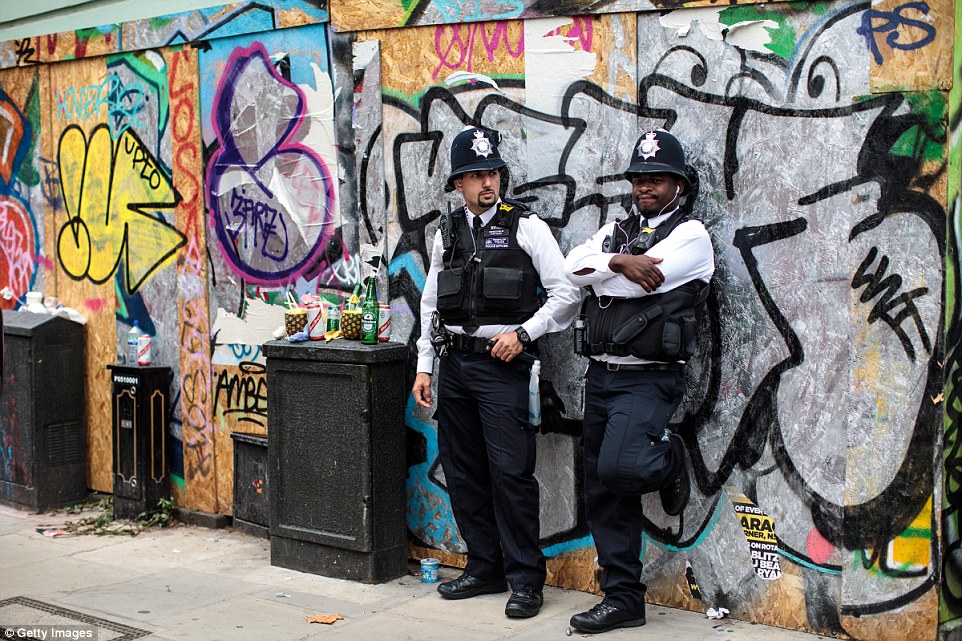 Thousands of people were expected to turn up to the 52nd carnival today, which is thought to give a £93 million boost to the capital’s economy

The Met Police said yesterday officers detained 42 people on drugs offences, 20 on suspicion of possession of an offensive weapon and seven on public order offences.

But the number of arrests make up a tiny minority, with the event expected to attract more than two million revellers in total to its floats, food stalls and music over the course of the weekend.

Police are operating with enhanced stop and search powers in a bid to crack down on violence.

Scotland Yard said it would also be imposing a Section 60 order across the carnival’s geographical area between 9am and 11.59pm on Monday.

The order allows officers to search people if they believe they may be carrying offensive weapons or in anticipation of violence.

Notting Hill Carnival Gold Commander Dave Musker said: ‘On Sunday, my officers along with colleagues from the British Transport Police arrested 133 individuals for a range of offences and 20 weapons were seized, including knives.

‘I am confident that the Section 60 order imposed yesterday prevented these dangerous items being brought to Carnival, and based on the intelligence at my disposal, I consider it proportionate and necessary to ensure a safe Carnival today.’

The bank holiday weekend event is being policed by the highest number of officers in six years.

Almost 7,000 officers, some from the Metropolitan Police’s newly formed Violent Crime Task Force, will be policing today’s event to ‘combat the threat of violent crime’.

This is up from the 6,100 on-duty officers at the less busy family day on Sunday.

Undercover police as well as officers from the force’s firearms and dog units will be in place.

The event is expected to attract more than two million revellers to its floats, food stalls and music over the course of the two days.

Heavy rain soaked the Notting Hill Carnival yesterday but has not stopped the determined revellers who are out to party.

Instead of the t-shirt and shorts sported for the searing hot weather of just a few weeks ago, there were umbrellas and a roaring trade for colourful plastic rain macs at Europe’s biggest street party.

Singer Alexandra Burke, named on Sunday as the carnival’s first ever ambassador, carried out her first duty in the role by opening this year’s event.

The community celebration will carve its way around west London in a mass of music, dancing, bold costumes and floats of soaked entertainers.

After a wave of violent crime in the capital in recent months, Scotland Yard announced knife arches had been placed at ‘strategic points’ along the route to help reassure people about their safety, though the Metropolitan Police did not disclose where.

Police hope the ‘tried and tested’ method of knife arches will put off those planning to arm themselves with knives and offensive weapons but not everybody will be expected to pass through them.

Burke described it as ‘a privilege’ and just a bit ‘nuts’ to be a carnival ambassador. It is a year-long role as the voice of carnival to help  promote the community spirit and positive aspects surrounding the annual event.

She recalled going to carnival as a child with her family and said: ‘The one thing that stands out for me about carnival is bringing the community together. It is people coming together and having a fantastic time.

‘It is just about a good vibe, good music, good food and amazing people around you.

‘So have the best day no matter what the weather is saying.’

At 3pm the music stopped for a 72-second silence in tribute to the 72 people who died following the fire at Grenfell Tower in June 2017.

The tower block is within half-a-mile of the parade route.

The silence was broken at the Rampage sound stage, just off Colville Square, with cheers, whistles and the booming voice of the late Aretha Franklin singing Respect.

Revellers had been asked to show respect and some, including Notting Hill Carnival Limited executive director Matthew Phillip, wore something green for Grenfell in tribute.

He proudly wore a green t-shirt with the words ‘come unity’ across the front.

‘It is not going away. We still have members of our community in temporary housing. This is to show our support.’

He said using the knife arches is part of a wide-ranging ‘belt and braces’ approach to try and make carnival safe. 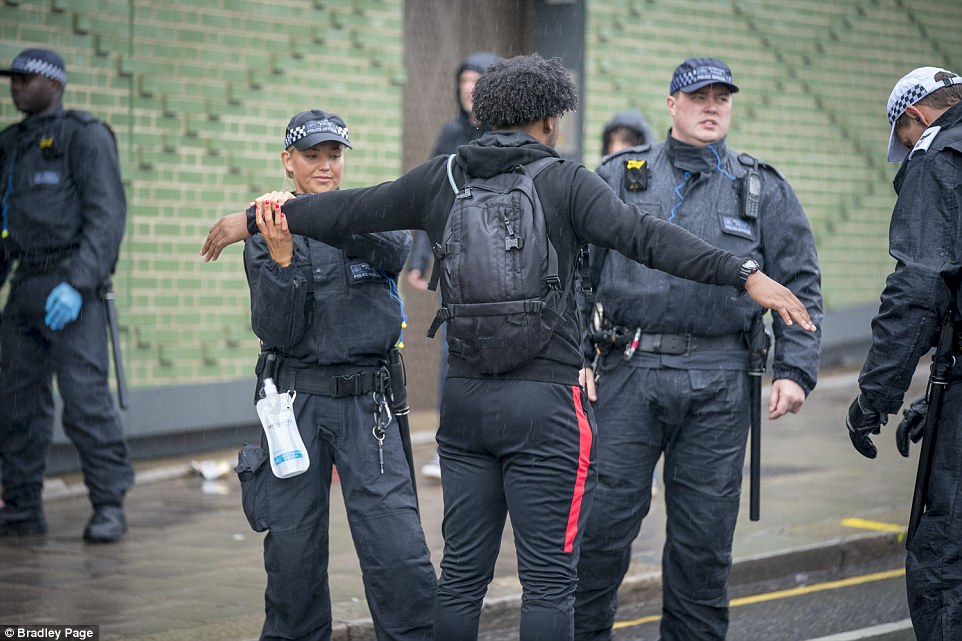 Police made 133 arrests and recovered 16 knives at the Notting Hill Carnival yesterday, Scotland Yard said, with officers gearing up for another day of festivities today. (Pictured: Officers stop and search a reveller in the rain at the Carnival today)

Mr Phillip added: ‘London as a whole and the UK is operating under a backdrop of knife crime, and we are working to have a safe carnival. The introduction of the knife arches is one thing we have as we to try to do that.

‘There have been so many other events that have this. Notting Hill Carnival is very different because it takes place on the streets.

‘We will have even more eyes and ears on the ground from the community as well as police, and I think that will help to make sure people feel safe and to identify people who come to wrong.

‘Most people who come to carnival come to enjoy themselves, and we want that spirit of safety and unity.’