More than 2,700 ‘unteachable’ children have been suspended from school at least 10 times

More than 2,700 ‘unteachable’ children have been suspended from school at least 10 times in the past year with one pupil barred from the classroom 63 times

Bullying, drug-taking and violence towards teachers were among the reasons that almost 3000 ‘unteachable’ children were suspended from school at least ten times last year.

Theft, ­racism and sexual misconduct were also highlighted as reasons for expulsions and suspensions in Department of Education stats released under Freedom of Information laws.

Shockingly, 1,170 pupils had ten or more exclusions in 2016 according to the figures that show that misbehaving is on the increase.

Among last year’s ‘unteachable’ pupils, an alarming 430 were still in primary school (stock)

Among last year’s ‘unteachable’ pupils, an alarming 430 were still in primary school.

The figures show that the worst behaved child according to last year’s stats missed a total of 43 days because of their 63 expulsions.

Another missed 62 days after being suspended 22 times.

Speaking to The Mirror, Christopher McGovern, chairman of the Campaign for Real Education, said that these ‘unteachable’ children cannot be taught in a normal school environment. 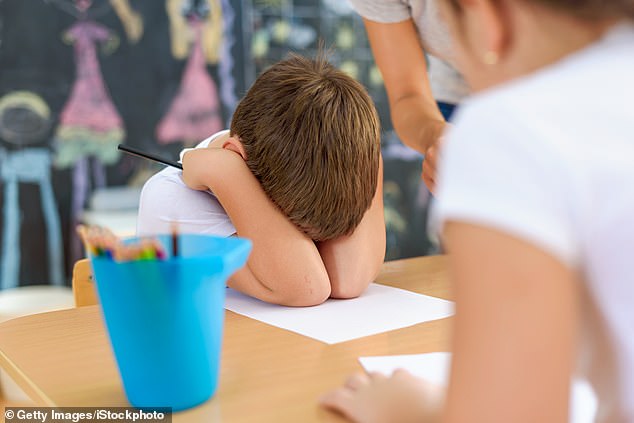 He said: ‘Some children are unteachable in a normal school environment. The havoc they cause can ruin the education of other children and destroy their life chances.’

A Department for Education spokesman said great strides had been taken helping teachers tackle poor behaviour in schools despite the fact that in the past five years the number of students suspended has risen by 37,000, from 146,000 to 183,000.

Tight budgets and the lack of specialised means of dealing with children with more specific requirements stemming from conditions like autism have also placed further strain on teachers.

Teachers often cannot cope with a learning disability and misunderstand it for misbehavior, leading to more exclusions.

Kevin Courtney, joint general secretary National Education Union told The Mirror: ‘There is not one magic solution, the Education Secretary needs to address the ever narrowing curriculum and the exam factory culture in our schools and colleges.’