Mortgage prisoners: How MPs could solve the problem

Imagine getting a letter from your mortgage lender offering to give you £30,000 on the condition you remortgage to another lender.

Sounds like a pipe dream, right? Well, just 10 years ago this was all the rage.

Debt forgiveness – more commonly referred to as a ‘golden goodbye’ – became popular in the immediate aftermath of the financial crisis as sub-prime lenders scrambled to offload customers and regain control of their own finances.

Bear Stearns-backed subprime lender Rooftop Mortgages, GMAC, Merrill Lynch-backed edeus and Morgan Stanley-backed Advantage all offered customers cash lump sums to the tune of tens of thousands of pounds in 2008 and 2009 to help them leave and get a mortgage from another lender.

The distant memory of golden goodbyes sprang to mind this week after another flurry of activity surrounding the issue of mortgage prisoners.

On Thursday, politicians debated the plight of these homeowners in parliament with Dover & Deal MP Charlie Elphicke opening the debate with the damning accusation that ‘the practice of selling mortgages…to unregulated funds has been creating mortgage prisoners….[who] are being exploited by such funds’.

He and others had a series of demands, including the inevitable call for an inquiry.

It prompted me to wonder how exactly politicians want lenders, the regulator, and the Bank of England to ‘help’ mortgage prisoners.

It’s all very well asking whose fault it is – you can read here how Sajid Javid axed plans to help in 2013 – but mission critical now is solving the problem. 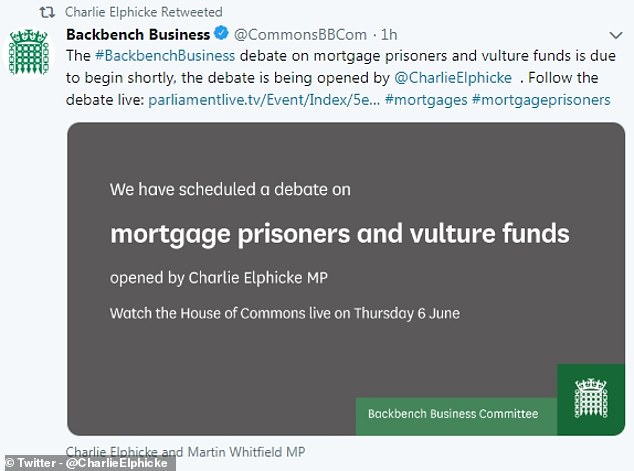 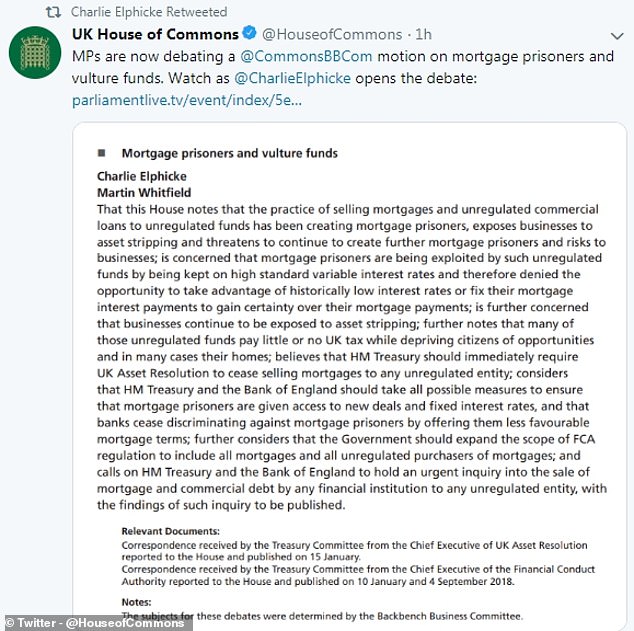 As a reminder, mortgage prisoners are borrowers who were given a mortgage – most likely pre-financial crisis – but who are now trapped on high variable rates, unable to remortgage to a cheaper deal because they no longer fit the profile of a ‘good’ borrower.

This can be down to a number of things: perhaps they borrowed a lot on interest-only and can’t repay the outstanding capital; they could have borrowed on one of Northern Rock’s infamous Together mortgages at 125 per cent of the value of the property, meaning they’re still in negative equity; they might have retired since first taking their mortgage; or seen a drop in their income.

Whatever the reason, they’re stuck, and they’re not alone: the latest official figures calculate there are around 200,000 mortgage prisoners in the UK.

In January this year the Treasury Select Committee asked the financial regulator to ‘act swiftly’ to help mortgage prisoners, particularly those trapped with firms that no longer offer loans.

Currently an estimated 20,000 homeowners are locked into mortgages with lenders that are no longer active – with a further 120,000 stuck with firms that aren’t regulated by the UK’s financial watchdog, the Financial Conduct Authority.

If these borrowers were with active lenders, the current rules would let their lender remortgage them onto a cheaper deal. For those with inactive lenders, it’s simply not an option.

Nicky Morgan, the committee’s chair, has said repeatedly that MPs have consistently raised the problems of mortgage prisoners with the Government and the regulator but so far just 10,000 borrowers have been offered help. 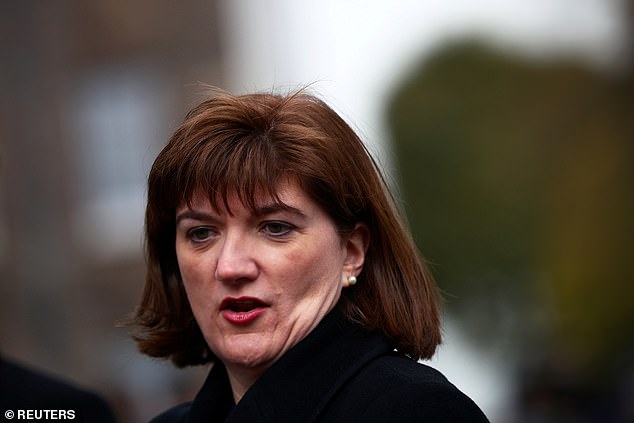 Nicky Morgan, chair of the Treasury Select Committee, has said repeatedly that MPs have consistently raised the problems of mortgage prisoners but few have been helped

The emotive issue of borrowers being sold off to third parties – dubbed ‘vulture funds’ by politicians debating the issue – re-entered the news again following the news that Tesco Bank had suspended mortgage lending and planned to offload its 23,000 mortgage customers.

Some 27 MPs from a cross-party group sent a letter to Tesco Bank chief executive Gerry Mallon urging the lender to ‘repay its customers’ trust’ by only exploring a sale to an active lender. 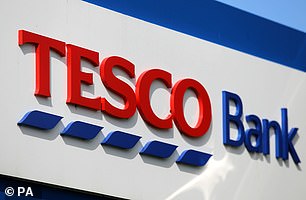 Tesco Bank has suspended mortgage lending and plans to offload its 23,000 mortgage customers in the near future

Tesco all but refused to commit, claiming its ‘priority in any sale is to complete a commercially acceptable transaction with a purchaser who will continue to serve our customers well’ – regardless of whether that was a mortgage lender still offering new deals or a private equity buyer or hedge fund unable to remortgage borrowers.

Whether they will remains to be seen, but to a large extent, it won’t matter.

UKAR has already sold the majority of its mortgage customers – the latest in a deal with investment bank Citi, which is incidentally not regulated to provide mortgages – leaving just over 35,000 customers with 44,000 mortgage accounts in situ.

What next for mortgage prisoners?

The Financial Conduct Authority is currently consulting on whether to allow lenders to waive its rules for mortgage prisoners looking to remortgage away from an inactive lender to an active lender.

But it’s not that simple.

Speak to any active lender and they’ll tell you privately that it’s nuts to take on a borrower who can’t afford their mortgage – who’s going to get the blame when it goes pear shaped in two or three years’ time and they’re turfed out?

Why mortgage prisoners are unable to remortgage is also a hugely important factor – one that Government appears largely to have glossed over.

The why becomes critical when you’re a lender looking to take a mortgage prisoner on.

What sort of mortgage prisoner are you? 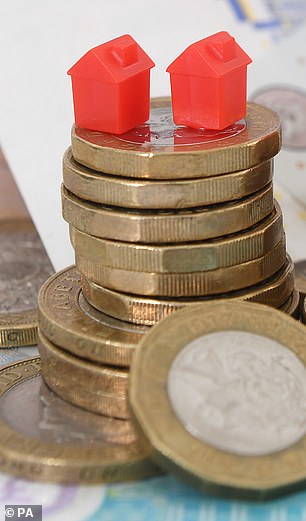 1. You borrowed too much and your property is worth less than the mortgage. You’re an equity prisoner.

3. You borrowed a mortgage you could afford but have seen a change in your income. You’re an affordability prisoner.

4. You borrowed sub-prime and on a discount rate and you can’t afford your repayments. You’re a credit prisoner.

For some, it’s likely there is no solution – and, horrible as it might seem, selling up is actually the best option for them financially.

That said, there are ways to deal with some mortgage prisoners sensibly and without the banks or the borrowers losing out.

Equity prisoners should be given a golden goodbye

Lenders handing over tens of thousands of pounds sounds mad, but the key to golden goodbyes is margin.

Many of these so-called vulture funds bought mortgage books (a bucket of, say, half a million mortgages) at a discount.

In simple terms, they paid less than the book (actual accounting) value of the mortgages they bought.

For example, for every £1 worth of mortgages, they might have paid 50p.

If everyone in the mortgage book repays in full, then they make a profit of 50p on every pound invested.

You’re no longer a mortgage prisoner.

That still leaves them with a clear £20,000 profit margin after you remortgage to a new lender.

Could Government incentivise funds to offer mortgage prisoners a golden goodbye? It would take a tax break probably – but it would be possible.

The Bank of England must relax stress tests 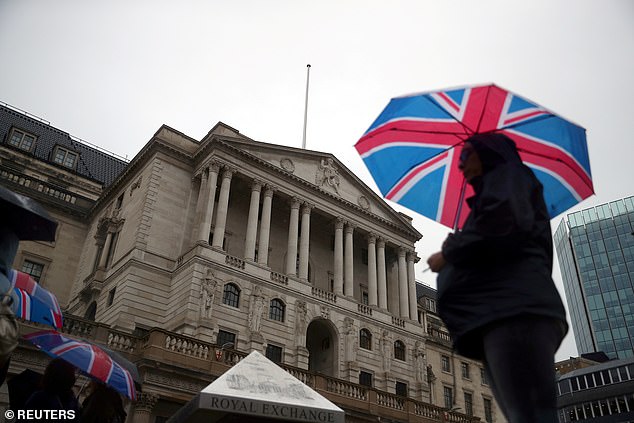 Affordability prisoners are probably the easiest to help.

Earlier this year the FCA chief executive Andrew Bailey confirmed the regulator’s plans to ‘remove potential barriers in our rules to these customers switching to a cheaper mortgage’.

He said: ‘To help these customers, we will consult on the changes to our responsible lending rules, with the aim to deliver a more proportionate affordability assessment.

‘We intend to move the assessment from an absolute test to a relative test, thus the test would be whether the new mortgage costs are more affordable than the current mortgage costs.’

Well, good. But. It’s not actually the FCA rules that pose the problem. It’s the Prudential Regulation Authority, which sits in the Bank of England.

Currently the Bank of England requires lenders to assess a borrower’s ability to repay their mortgage at a ‘stressed’ interest rate.

Basically, could they afford the monthly repayments in the event that mortgage rates rose – a lot.

To put this into context, Nottingham Building Society currently has a two-year fixed rate deal at 80 per cent LTV with a 1.6 per cent rate and £999 fee.

The same mortgage on a typical variable rate of 5.5 per cent would mean monthly repayments of £983.

But to qualify for remortgage to a new lender, the affordability is typically stressed to 7 per cent, meaning monthly repayments of £1,131.

That stress test needs to show parity with common sense.

If this is done, it’s likely a lot of the affordability and interest-only mortgage prisoners could be remortgaged away to new deals.

Fact: not everyone in the UK is financially stable enough to be a homeowner.

The mortgage madness that preceded the credit crunch and subsequent financial crisis encouraged those who should never have taken on the burden of home ownership to do just that.

These, along with those who have since suffered financial misfortunes, a loss of job or ability to work, a divorce or subsequent fall in income – all manner of quite ordinary everyday life events that hit a person’s finances where it really hurts – these are the mortgage credit prisoners.

The reality is that not every Englishman’s home is his castle; for some it has become a millstone around their necks

While interest rates are low, it’s possible to argue that having gone into arrears on their mortgage, it nevertheless hurts less to keep borrowers in their homes, repaying what they can when they can afford it.

There will come a point when the debt is simply too much and it’s better to sell a property and start again than continue to rack up more and more debt, creating a financial blackhole that borrower might not recover from.

Nobody wants to lose their home. No bank wants to take it from them. No politician wants to say, life’s not fair, not everyone can be a homeowner.

The reality is that not every Englishman’s home is his castle; for some it has become a millstone around their necks.

Solve the mortgage shortfall problem by selling it

This is an interesting one. The idea of selling a property to get out of mortgage prison sounds like a no-brainer – until you realise that you’re in negative equity and even after you sell and repay your lender, you still owe them £30,000.

The golden goodbye described above would be one way to deal with this.

Ask around and there’s another, which may be being mulled over by industry insiders already.

Where borrowers choose to sell with a shortfall, leaving the mortgage provider/owner with an outstanding debt of say, £30,000, that debt could be sold to a third party – at a hefty discount.

This is a golden goodbye of sorts but would probably cost the provider less in lost profits.

Say that third party provider buys up lots of these shortfalls at a discount, and then writes off some of the debt for borrowers but agrees with them an affordable amount they can repay over a reasonable term.

While far from ideal, this approach would help everyone in this chain to take less of a financial hit – or even make money – and get out of the conundrum once and for all.

Whatever happens, politicians, the regulator and Bank of England, lenders and borrowers themselves must recognise that getting out of mortgage prison isn’t going to be a walk in the park.

There is no easy fix and rehabilitation to ordinary life will take time and effort. That’s the nature of prison, and there’s no getting away from it.