Most people around the world believe capitalism is doing more harm than good, survey finds

Most people around the world believe capitalism is doing more harm than good, survey finds ahead of annual Davos meeting of business and political leaders

A majority of people around the world believe capitalism is doing more harm than good, a survey has found ahead of the annual Davos meeting of business and political leaders.

Fifty-six per cent of the 34,000 surveyed from 28 countries, which included liberal democracies like France and those based on different models such as China and Thailand, gave the western ideology a thumbs down in the Edelman Trust survey.

Only in Australia, Canada, the United States, Hong Kong and Japan did the majority disagree with the belief that capitalism has not benefited them.

It comes more than a decade after the 2008 financial crash, and following spikes in trade protectionism and nationalist movements across Europe and North America.

Fifty-six per cent of the 34,000 people surveyed from 28 countries, including China, France and Thailand all gave the western ideology the thumbs down. (Woman flattens a logo ahead of the 50th annual Davos meeting in Switzerland)

The study’s authors said a rising sense of inequality prompted them to ask whether citizens were now starting to have more fundamental doubts about the capitalist-based democracies of the West.

‘People are questioning at that level whether what we have today, and the world we live in today, is optimised for their having a good future.’

The majority ticked the option which said they agreed that ‘capitalism as it exists today does more harm than good in the world’.

The survey was launched in 2000 to explore the theories of political scientist Francis Fukuyama, who after the collapse of communism declared that liberal capitalist democracy had seen off rival ideologies and so represented ‘the end of history’. 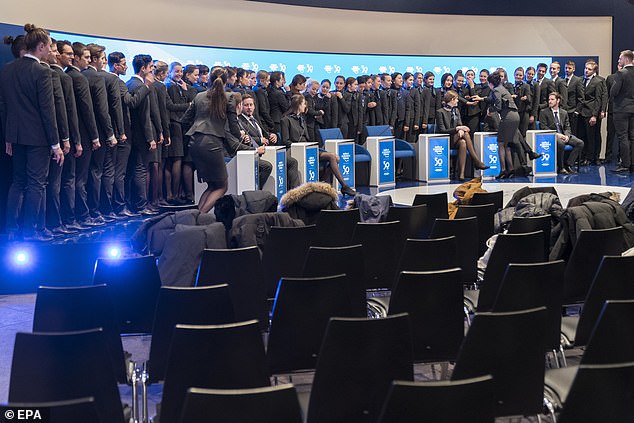 Only majorities in Australia, Canada, the United States, Hong Kong and Japan disagreed with the statement. (Pictured are preparations ahead of the summit in Davos, Switzerland) 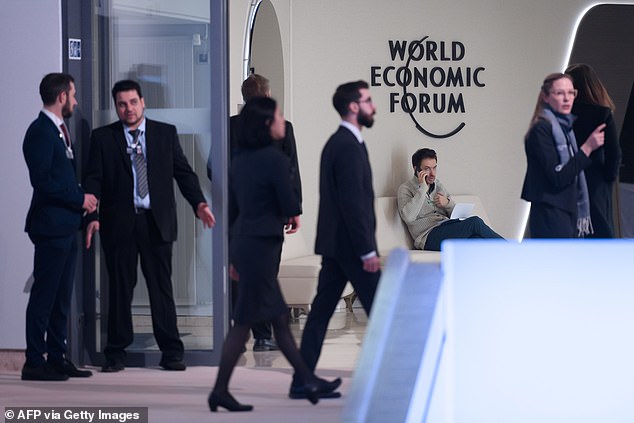 Study was carried out by the Edelman Trust Barometer who said they were prompted to ask the question by rising inequality across the world. (Pictured is preparations in Davos)

That conclusion has since been challenged by critics who point to everything from the rising influence of China to the spread of autocratic leaders, trade protectionism and worsening inequality in the wake of the 2007/08 global financial crisis.

On a national level, lack of trust in capitalism was highest in Thailand and India on 75 per cent and 74 per cent respectively, with France close behind on 69 per cent. Majorities prevailed in other Asian, European, Gulf, African and Latin American states.

The survey confirmed a by now familiar set of concerns ranging from worries about the pace of technological progress and job insecurity, to distrust of the media and a sense that national governments were not up to the challenges of the day.

Within the data there were divergences, with Asians more optimistic about their economic prospects than others across the world. There was also a growing split in attitudes according to status, with the affluent and college-educated much more likely to have faith in how things were being run. 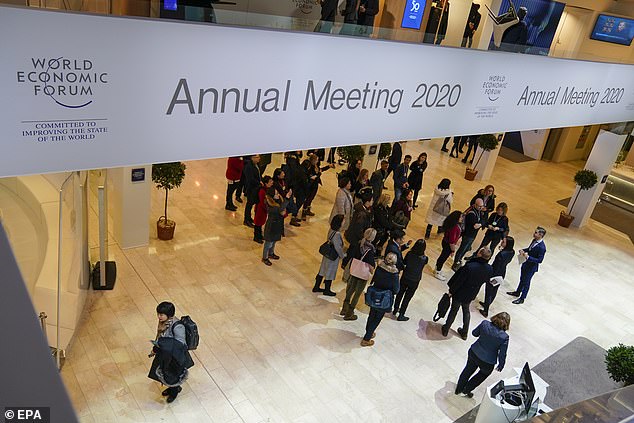 Lack of trust in capitalism was highest in Thailand, 75 per cent, and India, 74 per cent

They also found that trust in business outweighed that in governments and that 92 per cent of employees said CEOs should speak out on the social and ethical issues of the day, ahead of the Davos gathering in Switzerland this week.

‘It can no longer be business as usual, with an exclusive focus on shareholder returns.’