Mother-of-two, 36, endures terrifying hallucinations that see her tormented by ‘an evil presence’

A mother-of-two endures terrifying hallucinations where she is haunted by visions of ‘an evil presence’ that she cannot escape.

Sarah Spence, 36, from Hull, has suffered from sleep paralysis – the inability to move when falling asleep or waking up – for 17 years, which causes her to believe someone is in the room and wants to hurt her.

After being dismissed as just ‘bad dreams’ by her loved ones, Ms Spence thought she was slowly going mad for years while she lay ‘frozen’ in her sleep, enduring these horrifying visions.

Too embarrassed to tell her GP, the carer gets by on just three hours sleep a night and only allows herself to nod off when she literally cannot keep her eyes open anymore.

‘The fear is one day I won’t be able to wake myself up and I’ll be trapped inside the nightmare forever,’ she said.

Sarah Spence endures terrifying hallucinations where she is haunted by visions of ‘an evil presence’ that she cannot escape while she lays in bed ‘frozen’, unable to move or speak 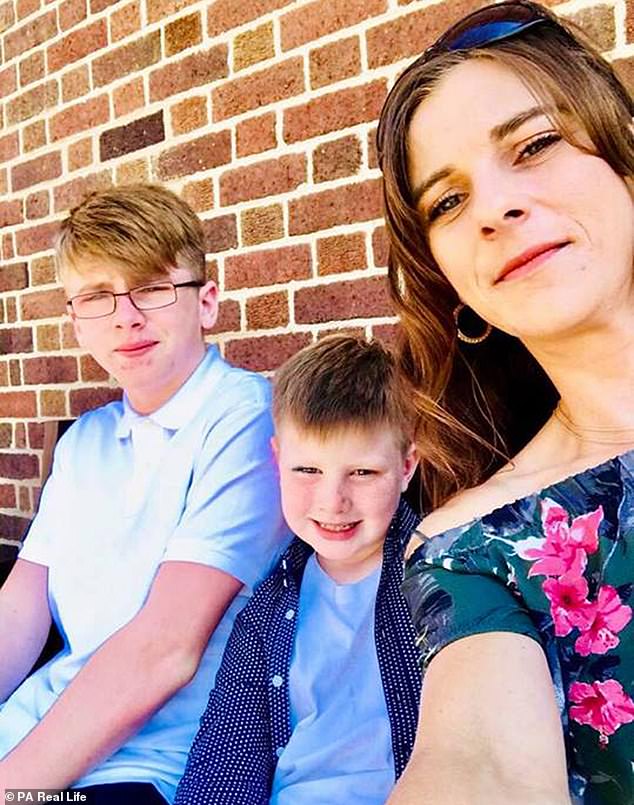 Pictured with her sons Kieran, 14, and Liam, eight, the carer gets by on just three hours sleep a night and only allows herself to nod off when she is unable to keep her eyes open any longer

‘I’m totally conscious and aware of being trapped in a body that won’t let me wake up properly and get up.

‘It’s absolutely terrifying and often the feeling of being frozen is accompanied by horrible hallucinations and visions of an evil presence.

‘Now I just won’t go to sleep until I really can’t keep my eyes open any longer, because the fear is that one day I won’t be able to wake myself up and I’ll be trapped inside the nightmare forever.’

Ms Spence claims her disorder took a traumatic turn for the worse after she divorced the father of her son’s Kieran, 14, and Liam, eight, in 2016.

‘Without having the reassurance of another presence beside me I felt like I was less safe and the sleep paralysis began to hit me a lot harder than it had before,’ she said.

Ms Spence often relies on her children to rouse her from her frozen state.

‘I am so deep in the paralysis that sometimes it’s only when Kieran and Liam come in and jump on my bed that I’m able to finally get up,’ Ms Spence said.

‘My sister Michelle has to ring me every morning because I’ll usually be in this state through all of my alarms.

‘Sometimes, because of the paralysis, I just can’t move to answer the phone either, though, and get up to find that I’ve had 40 missed calls from her.’

She often nods off on the sofa due to her symptoms being less severe when she is in an upright position. 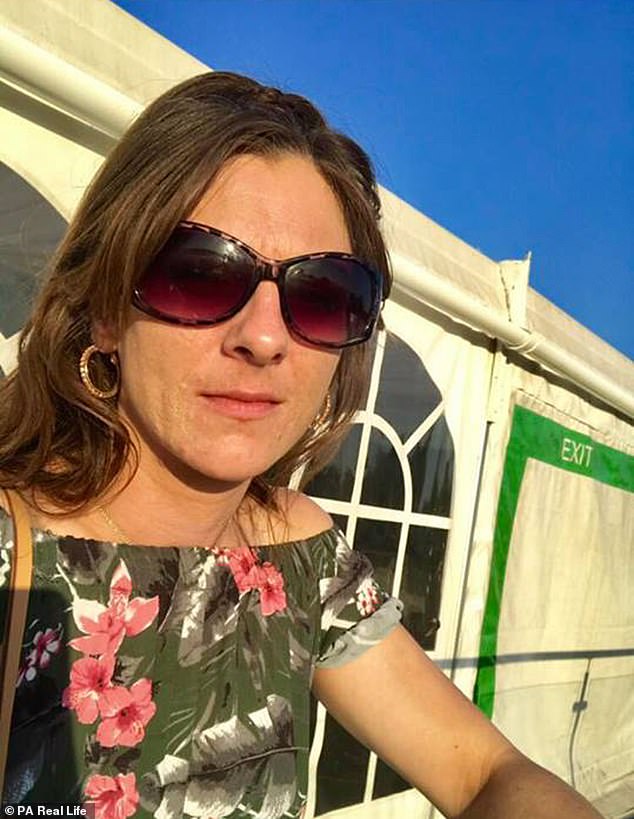 For years Ms Spence thought she was going mad when her loved ones repeatedly dismissed her symptoms as just ‘bad dreams’. She suffers from sleep paralysis nearly every night, which leaves her ‘totally conscious and aware of being trapped in a body that won’t let me wake up’ 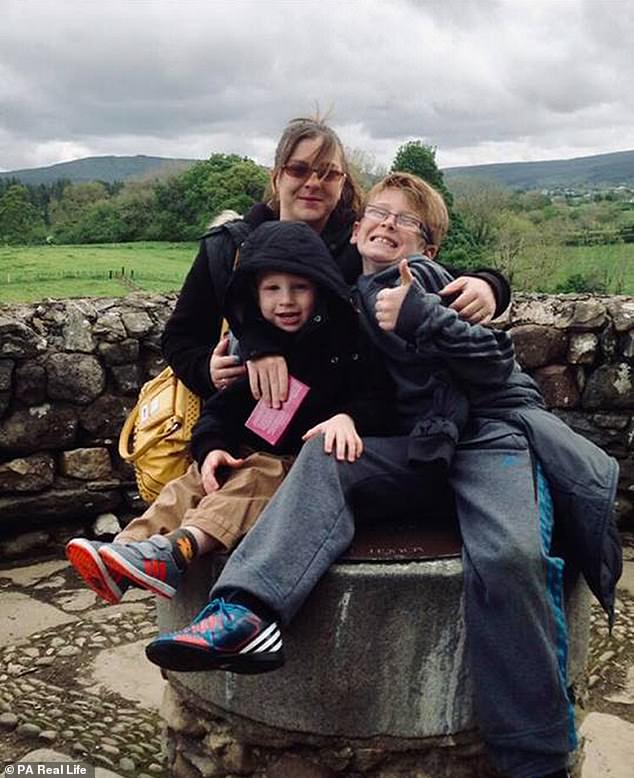 Pictured with her boys in Tamworth earlier this year, Ms Spence often relies on her sons to wake her from her frozen state while she sleeps through multiple alarms. She even goes to sleep on the sofa due to her symptoms being less severe when she is upright

Ms Spence claims her condition makes it extremely difficult for her to wake up in the morning, which means she can only work night shifts.

Starting work at 5pm, she is home before midnight, with her sister looking after the boys while she is out.

But, instead of heading straight to bed, Ms Spence stays up as late as she can – too scared to sleep.

She also blames her sleep paralysis for often making her sons late for school.

‘I’ve been called in a couple of times by the school to explain why the boys are so often late in,’ Ms Spence said.

‘When I’m asked what the matter is, though, and why it happens, I usually say that it’s to do with anxiety and stress. I just can’t bring myself to explain what’s really wrong with me.’

Ms Spence is also too embarrassed to reveal the extent of her suffering to her GP and has therefore only ever been treated for insomnia and anxiety. She self-diagnosed sleep paralysis after reading about it online. 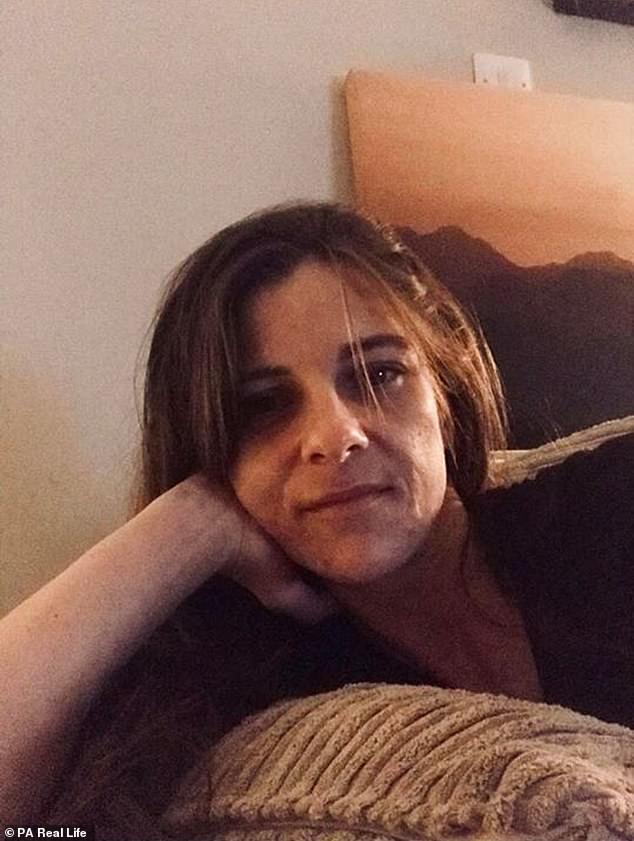 Ms Spence’s ultimate fear is she’ll be ‘trapped inside the nightmare forever’. Due to her family dismissing her symptoms when she was younger, the carer has only ever been treated for insomnia and anxiety, with her being too embarrassed to be honest with her GP 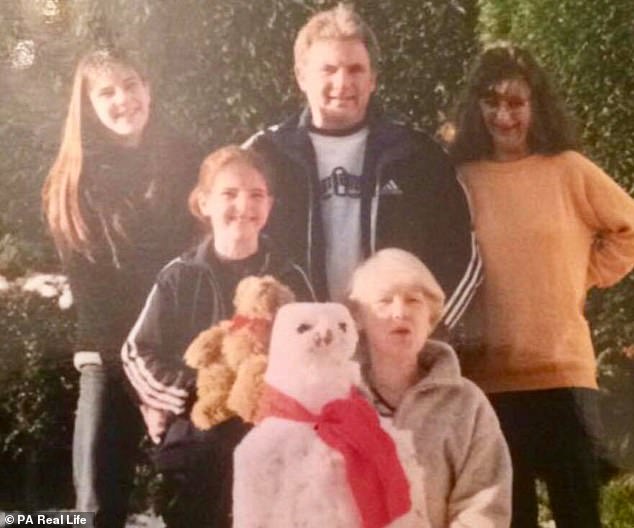 Ms Spence is pictured left at 16 years old. She first experienced sleep paralysis at just 13. Also pictured are her parents, younger sister and aunt. After experiencing relief from her night terrors in her 20s, Ms Spence believes they were triggered again by her mother’s death

WHAT IS SLEEP PARALYSIS?

Sleep paralysis is the temporary inability to move or speak when you are waking up or falling asleep.

It is not harmful and usually passes within minutes or even seconds, but can still be distressing.

Most people experience sleep paralysis once or twice in their lives. Around seven per cent suffer regularly.

Other symptoms may include sufferers feeling like their chest is being crushed, only being able to move their eyes or like someone is watching them and even wants to hurt them.

Sleep paralysis occurs when parts of the rapid eye movement stage of sleep takes place while a person is awake.

REM is when dreams occur and the brain is very active but the body is unable to move apart from the eyes and the muscles used in breathing.

This is thought to stop a person acting out their dreams and hurting themselves.

REM can occur while a person is awake if they are sleep deprived or jet lagged. It is also associated with sleeping on your back and can run in families.

People see should their GP if this occurs often or makes them anxious to nod off.

‘It was very scary the first time it happened because I had absolutely no idea what was going on,’ she said.

‘I was lying on my stomach, feeling like I had woken up, but I just couldn’t move a muscle.

‘I tried screaming, but I couldn’t make a sound and had a very realistic hallucination that I was falling and being bounced around my bedroom.’

Although the episode lasted just a few minutes, Ms Spence claims it felt like hours.

And as the years passed, she began to experience the terrifying episodes for longer and longer almost every night – making her scared to go to sleep.

But it was not until her late teens that Ms Spence found the courage to tell anyone what was happening.

‘I told my brother one day and it made me feel a lot better about it all,’ she said.

‘It was nice to get it off my chest and hear someone be sympathetic and not make me feel like I was going mad.’

But other loved ones dismissed her sleep paralysis as ‘just bad dreams’.

‘After that, I stopped telling people altogether and certainly wouldn’t go to the doctor about it, worrying they’d just take one look at me and think I was a fool,’ Ms Spence said.

When she met her now ex-husband while in her 20s, Ms Spence’s episodes stopped for six years, which she puts down to not sleeping alone.

‘The reassurance of having another person there really helped to calm it down,’ she said.

But when she turned 26 the condition returned, which she believes was triggered by  her mother’s death.

‘When they came back, I was quite wary about telling my then partner and when I finally did, he just passed it off as nothing,’ Ms Spence said.

Finding herself frozen almost every night and trying to shout out to her boyfriend, she would wake flustered and sweating, only to find she had not made a sound.

‘Sometimes, when I was really, really distressed and trying to break out of the paralysis, he would notice it if he was awake and watching me,’ Ms Spence said.

‘He’d comment that I’d be twitching a lot in the night, as though I was being shocked by something.’ 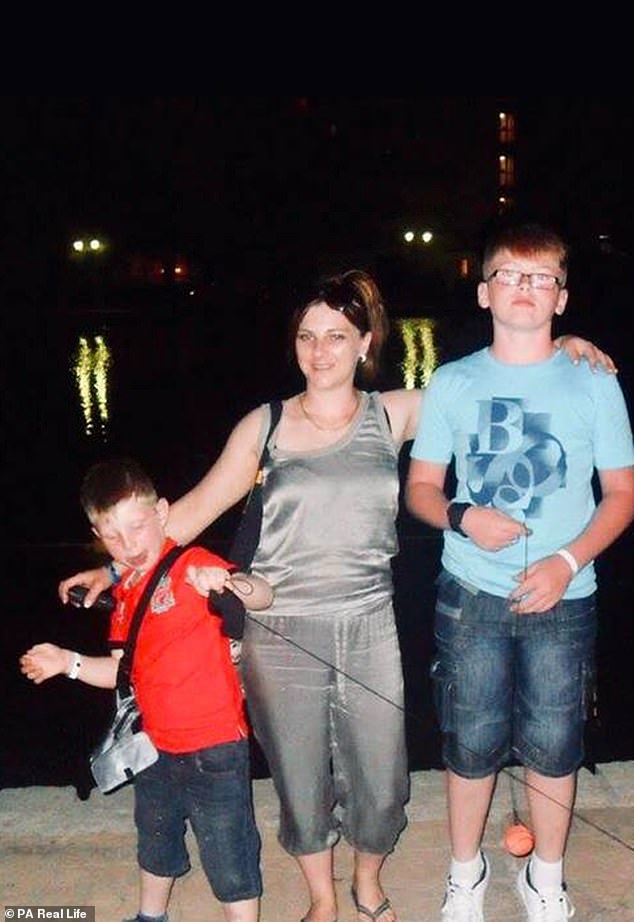 Pictured with her sons in Majorca in 2016, Ms Spence has been called into their school by staff asking why they are always late. She blames her disorder for making it difficult for her to get up in the morning. She even relies on her sister Michelle ringing her to ensure she is awake 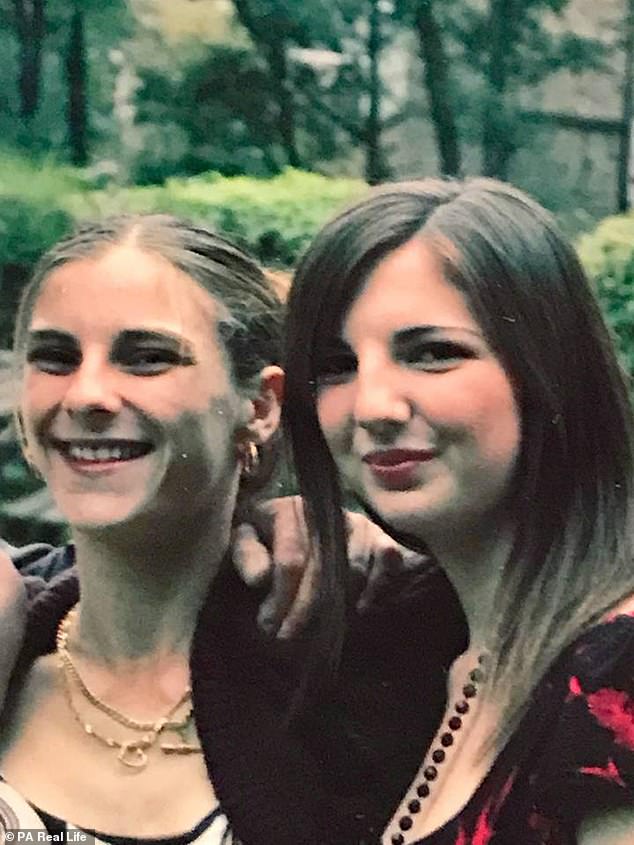 Ms Spence is pictured left aged 25 with her younger sister Theresa. It was around this age that she met her now ex-husband and father of her children. Sharing a bed with him helped ease her paralysis. Now divorced, Ms Spence has noticed her symptoms have worsened

Ms Spence is speaking out to raise awareness of sleep paralysis and admits she feels very isolated due to the poorly-understood condition.

‘Aside from a few social media groups there’s so little out there about sleep paralysis and no one seems to know much about it,’ she said.

‘I would love to be able to meet other people and talk to them about their experiences, but it is so uncommon I’ve never met anyone who’s like me.

‘I’d like to know that I’m not alone, because it’s something that’s had a profound effect on my life and I feel as though nobody understands.

‘I wish there was a cure for it as I feel like, to some extent, it is really starting to take over my life, being afraid to do something every day which most people think is just the easiest thing in the world.

‘But apart from that, just for people to be aware that it exists would be a great first step and would help people like me feel that I’m not just slowly going mad.’ 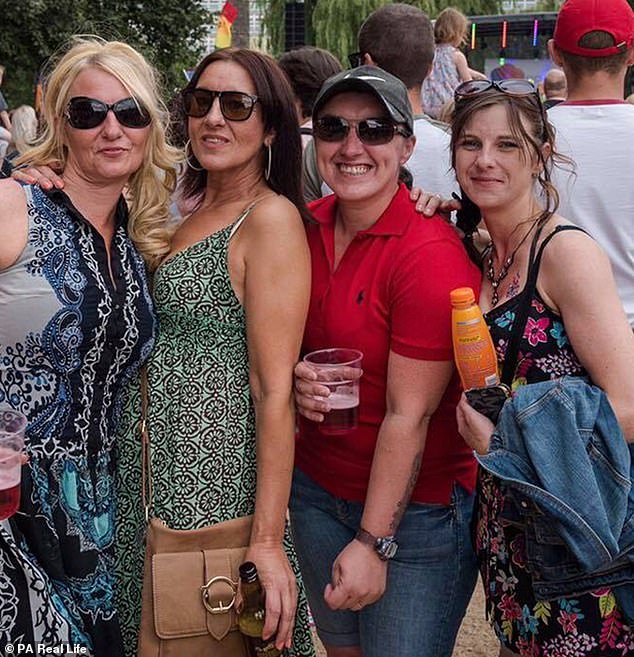 Pictured right with her friends in Hull last year, she wants to raise awareness of sleep paralysis