A premature baby boy born at just six months had to be placed inside a plastic bag to keep him alive, his mother has revealed.

Isabella Gailbraith, 33, from Stourport-on-Severn in Worcestershire, went into labour at 25 weeks — 101 days early — and was rushed to hospital.

The mother-of-four gave birth to Pace, who weighed just 1lb 4oz and was so small he had to be placed inside a neonatal bag to keep him warm moments after birth.

Pace, who was so small he could almost fit in his parents’ palms, has spent the first weeks of his life in Bristol Children’s Hospital while his lungs develop.

His parents hope he will be well enough to come home by June 22 — his original due date.

Ms Gailbraith, a GP receptionist, said: ‘When he was born the doctors worked on him to get him breathing for five minutes.

‘They then they popped him in a neonatal bag, which is basically a drawstring bag type thing that is used to keep him warm because Pace couldn’t regulate his temperature.

‘If he was born at home, even putting him in a plastic bag would have helped.’

Pace Gailbraith (pictured), was born 101 day earlier weighing just 1lb 4oz and was so small he had to be placed inside a plastic drawstring neonatal bag. The newborn, who fits in his parents’ hands ‘with a little leg hanging over’, has spent the first weeks of his life in intensive care at Bristol Children’s Hospital while his lungs develop 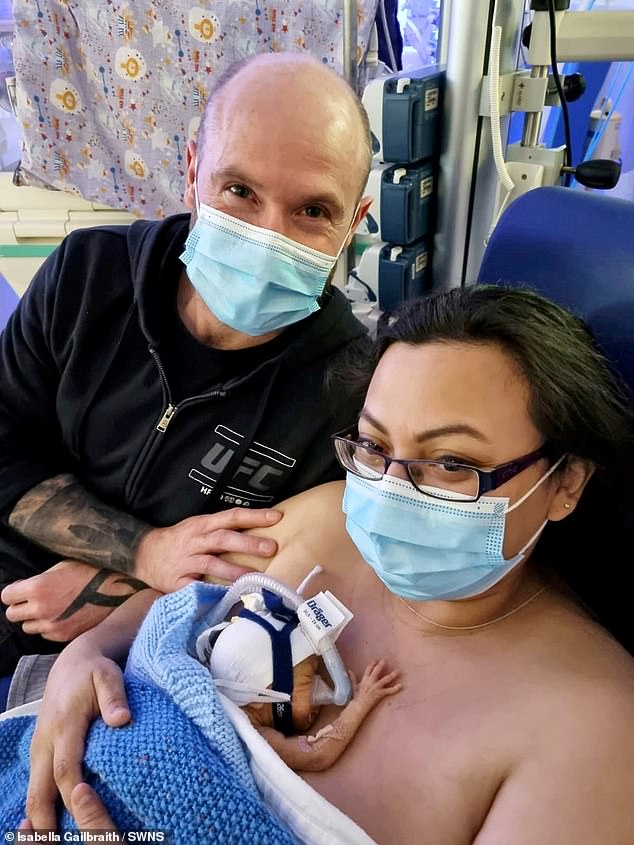 Isabella Gailbraith, a GP receptionist (pictured with Pace and his father Paul), said: ‘When he was born the doctors worked on him to get him breathing for five minutes. ‘They then they popped him in a neonatal bag, which is basically a drawstring bag type thing that is used to keep him warm because Pace couldn’t regulate his temperature’ 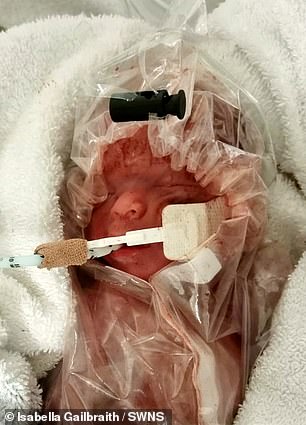 Pace (pictured in the plastic bag) is now being looked after at the hospital in Bristol, where he is in an incubator

WHY ARE PRETERM BABIES PUT IN PLASTIC BAGS?

One in every 13 babies are born preterm in the UK every year, which is classed as before 37 weeks of pregnancy.

This equates to around 60,000 babies born too early in the UK.

Doctors use plastic bags or wrapping in the first 10 minutes after a baby is born preterm to help them avoid hypothermia, as they are highly susceptible to losing body heat.

Studies have shown pre-term babies wrapped in plastic significantly lowers the risk of death among newborns.

However, not all preterm babies need specialist neonatal care.

Ms Gailbraith was rushed to Worcestershire Royal Hospital after her waters broke on March 7.

Her 12-year-old child was born 10 weeks early, so Ms Gailbraith was aware that she could give birth early again.

She was transferred 72 miles away to Bristol where doctors tried to delay labour but were forced to perform an emergency caesarean four days later on March 11.

She said: ‘When I went in, I was already 2cm dilated, so he was just desperate to come out.

‘He was actually trying to be born at 24 weeks but we had some drugs to try and delay it. When he was at 25 weeks, he decided he had enough.’

Ms Gailbraith had been taking anti-clotting medication because she had been in bed for a week beforehand, as inactivity raises the risk of developing a clot.

But this meant she could not have an epidural for the procedure because it raises the risk of bleeding around the spine which can cause paralysis.

Pace is now being looked after at the hospital in Bristol, where he is in an incubator.

Ms Gailbraith and Pace’s father Paul, a prison officer, visit him every day and are now able to hold him, despite his tiny size.

Ms Gailbraith said: ‘We’re getting there, slowly. It just hasn’t really been my time.

She added: ‘You can see how much he’s developing into a normal looking baby.

‘All that extra time you get with him that you normally wouldn’t get. It’s all the little things you take you for granted, like opening his eyes.

‘The first time we had a cuddle was when he was a week old. We do have cuddles now.

‘I think we’ve probably had him out about ten times. It’s lovely but also stressful as you’re constantly checking the monitors for heart levels.

‘He was minute and his skin is quite delicate so you could not touch him.

‘He just about fits in your hand, with a little leg hanging over.

‘Progress is slow, the lungs aren’t developed until 32 weeks. So he was on a ventilator at first and now he’s on a different breathing machine.’