She had the dream job, the handsome husband, the perfect life – so nothing prepared The One Show presenter ANGELA SCANLON for the crushing sense of loss she felt after becoming a mother. She tells Sophie Heawood what it took to get her back on track

Angela Scanlon is an absolute riot, almost shrieking as she recalls her return to work as a television presenter after having her daughter two years ago. She was desperate to find the fastest commute from her house in North London to the set of her BBC interiors makeover show Your Home Made Perfect, and found it ‘on the back of a motorbike driven by a lad called Damon, 45 minutes each way, clutching my industrial-sized breast pump so I could whack it on in my lunch break’, she says.

The hospital-grade equipment had seemed a canny purchase after breastfeeding went badly, despite ‘that expectation that you’ll be a natural. If you had told me it would feel like squeezing razor blades through my nipples then at least I could have braced myself for that,’ she laughs, adding that she had a brief moment of looking down ‘and thinking, I wasted my boobs for all these years. I should have got them out more – it’s too late now.’

It’s impossible not to cackle along with the Irish redhead, although the way the camera seems to lap her up on set at our photo shoot suggests that nothing in her life is late at all; rather, her career is building nicely towards who knows what peak? Motherhood, though, has been a rockier ride, as she will later explain.

Angela, 36, from Ratoath in County Meath, began her TV career in Dublin, after her work in clothes shops and as a personal shopper – combined with her gift of the gab – led to her being asked to appear as a style pundit. She has since presented The One Show, Robot Wars and worked on The Voice, as well as creating her own documentaries – in fact, her career was kickstarted by Oi Ginger!, in which she sought to ‘explore gingerism as the last remaining acceptable prejudice’, she says, laughing again.

At 30, she married her boyfriend Roy Horgan, who runs his own tech company, and, she says, after such a busy time working in Dublin, ‘when I rocked up the aisle I basically had to say, “Hi, do you remember me?” He was trying to close a round of funding on his first business; I was travelling so much and pretending to producers that I already lived in London when we couldn’t yet afford to, and kept sneaking back home.’ 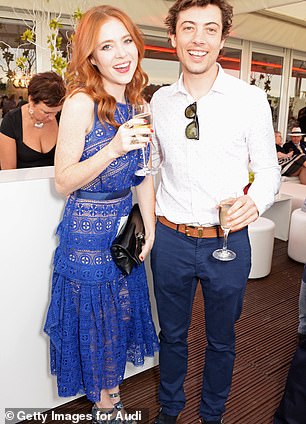 Left: With Your Home Made Perfect’s architects Laura Jane Clark and Robert Jamison Right: Angela with her husband Roy Horgan

After moving to London and finally buying a house, and with Angela – who grew up one of four sisters – already becoming an auntie, it seemed like the right time to start a family. Yet the reality of having a baby sent her reeling – she didn’t even fully understand that she was giving birth. ‘I knew I had the bump, knew we’d bought the cot and I had my labour plan – but I wasn’t really thinking about the next 18 frigging years. So when we went to the hospital with me eight centimetres dilated and asked them what was going to happen, they were like, “You’re going to have a baby.” And I was like, “What, now? No! I don’t even have an overnight bag!” It was as if I hadn’t quite connected the two – it just hadn’t landed with me, you know?’ Having spent so many years building her name, constantly on the move and ticking the boxes of success, Angela says she found it hard to surrender to the helplessness a baby puts in front of you.

‘I didn’t realise that my whole identity was tied up in my work. Always reaching for things – if I can get to that other job, to that next gig, then I’ll be all right. Always looking forward, no matter how far I had come. In my little book of things I wanted to do, I had done quite a lot of them. So then you have this amazing little human and you’re supposed to feel pretty good and…’ she pauses, her voice turning quieter at the memory of it, ‘I didn’t really.

‘Social media had given me a sense that everybody had it all figured out, that the baby comes and then you’re in this glorious little love bubble. Well, I was scrambling. Suddenly you’re literally stuck on the couch. You know the line, “A baby is born but a mother is born as well”?

I think we put pressure on ourselves that we should know exactly what to do, but I felt like a giant baby myself.

‘It took a long time for me to give myself a break and realise, “OK, you’re not supposed to know what you’re doing here. You learn with her.” And I think that has been a theme for me, because I’ve never really allowed myself to be an amateur at anything.’

She wonders if there was a certain Irish pressure in her predicament, especially when, from the outside, her life looked so perfect. Where she comes from, there is always ‘that sense of, “Come on, you have everything you wanted; you made your bed, now lie in it.” There’s very little nuance. But you can also feel a lurching sense of loss when you become a mother.’

What has helped? Learning to be right there, in the room, breathing. ‘Learning to get lost in her, in the present, without thinking, “Right, what am I supposed to be doing?” It’s like a little meditation, you know?’ 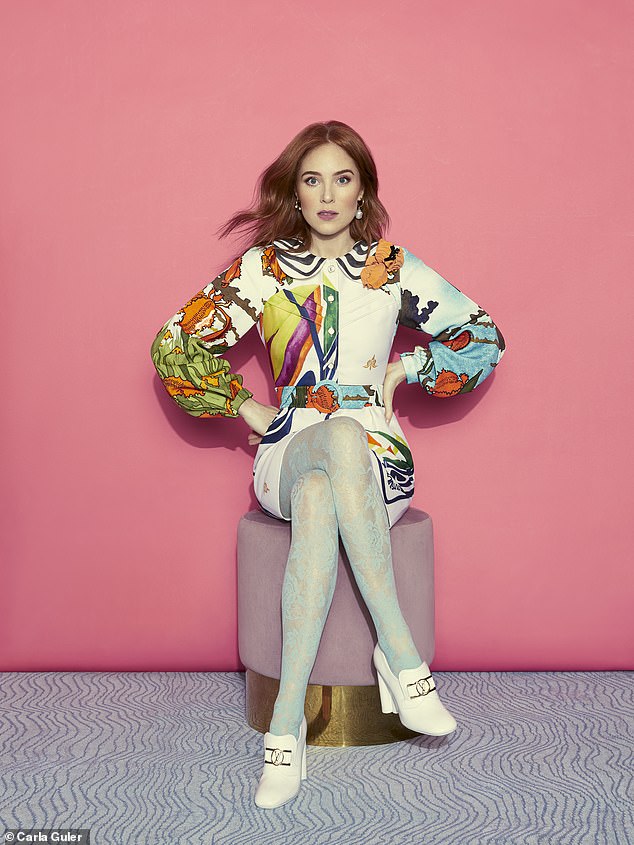 She brightens her tone. ‘But some people do feel that on the day they give birth. Good for them! Delighted for you,’ she adds, with a wicked hint of mischief. ‘I breathed it out through a golden thread,’ she says, impersonating the sort of earth mothers one might read about on Goop. ‘Well, I was too late for an epidural so I was chugging on that gas and air like it was going out of fashion.’

Two years later she’s in great spirits and in love with her daughter, whose name and face she and Roy try to keep private. But they are still slightly in shock: ‘We’re still figuring it out.’ As for social media, you might see the tiniest glimpse of their little girl in Angela’s public photos, ‘so it’s funny when we meet people we know and they say, “My God, I can see her face! I’ve only seen the back of her head until now.” I don’t think there’s a wrong or a right answer to all of that, though – whatever parenting decision you make, you’re probably going to be up at 2am at some point worrying about it.’

It’s also taken until now for her to realise that her husband’s attitudes aren’t always the norm. ‘He always said, “I know that you want family but I also know how important career is, and I never want you to feel like you’ve been stopped from giving it a shot,” which I maybe took for granted initially. Because I’m one of four girls it didn’t occur to me that maybe women weren’t given the same opportunities as men, or weren’t always supported by them to reach for those things. It never really entered my head.’

She sees now that the world isn’t always like that. ‘I do think a strong woman can be extremely threatening for a lot of men. But Roy’s amazing, and if I have to go on a red carpet he’s literally like, “I’ll see you tomorrow.” He likes to be invisible – he’s banned me from putting him on Instagram. And banned the kid – my content is tanking. It’s a disaster.’

She is excited about series two of Your Home Made Perfect, which is currently airing on BBC Two. The show uses virtual reality headsets for people to imagine the way their homes could be transformed. Angela feels particularly passionate about giving people the power to rebuild, and says that, having always loved looking at interiors in magazines and on Pinterest and Instagram, the show has given her a whole new understanding of what our homes mean to us.

‘Since making this show, I’ve realised the impact their home has on people. It’s not just, “Oh, isn’t that a pretty couch!” or, “I like floral wallpaper.” You see people come on and, even in their demeanour, the way they walk into the room, you can see they’re depressed by their home. They feel caged in their house, which is supposed to be their sanctuary, an expression of themselves. So many people say to us, “I’ve just given up. I don’t have the money, I don’t know where to go. I’ve had builders round telling me I can’t do anything and I don’t have the technical knowledge to tell them I can.”’ 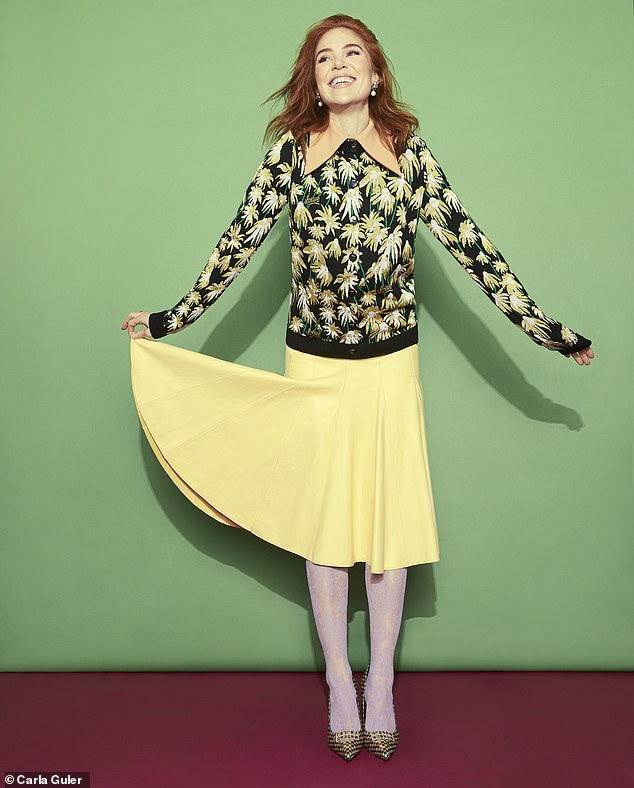 As someone who used to work in fashion, Angela has observed that the days of ‘people such as Gok Wan telling you, “Oh, you’re only allowed to wear that style” are over. That’s so restrictive, and we’ve thrown away those rule books now. I want to give people the same confidence for our homes. I liken it to the way I used to think of priests and doctors: reverentially, because they have the book and they must know, and you have to accept what you’re given. A lot of people feel that way with architects and builders – I don’t think we approach anything else in our lives with that level of apology when we’re paying for it.’

Angela says that she adores the show’s big reveals, though she admits some of the designs are ‘bonkers’. Her favourite moments, however, ‘are when they cry’.

Other projects include her podcast, Thanks A Million, which focuses on gratitude and giving thanks. Now in its second series, each week she has ‘Thanksperts’ and celebrity guests including Fleabag’s Sian Clifford, Aisling Bea and Stacey Dooley to chat about how being appreciative has improved their lives. 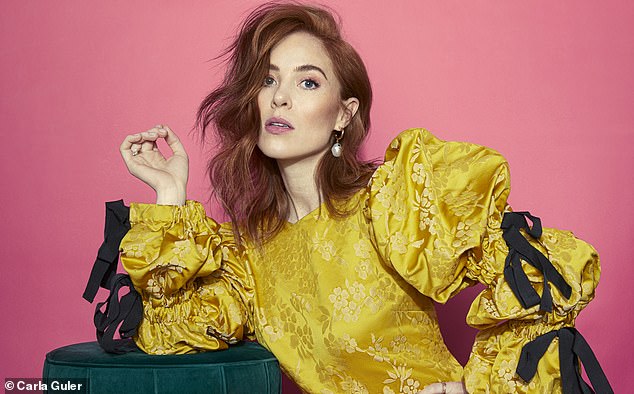 Then there’s her early Sunday morning show on Radio 2 (on a break during lockdown), where she walks through the doors of Wogan House at the BBC, named after her Irish predecessor, and feels a thrill of being there. ‘Just to be in the same building as Zoe Ball and Graham Norton – I’m like, “Hi, will I get your tea?” Also, radio is so lo-fi. Jeremy Vine just wheels his Brompton folding bike in. There’s no fuss, no make-up. It’s a lovely contrast to the fanfare and production of telly. It’s just you and a producer and you have that sense of someone out there, listening. You know that you’re their company.’ Television remains her equally great ambition, though, because Angela has noticed that there aren’t any female chat-show hosts on our screens – and she’s not happy about it.

‘Graham Norton, Jonathan Ross, Alan Carr, Russell Howard…’ she says, reeling off the names of men whose shows she might love watching, but always with a sense that something is missing. ‘I feel like Ruby Wax was the last woman who really did it,’ she adds, and that was in the 1990s. So would she really like to host one? ‘Absolutely. Yes,’ she says emphatically, ready for the challenge. It’s clear to me that she carries both the energy and the wit to have people in stitches. ‘I mean, why not?’ she adds. ‘As my dad very optimistically says, you could be dead in the morning.’

Your Home Made Perfect is on BBC Two on Tuesdays at 8pm and the full series is available on iPlayer. Angela’s podcast Thanks A Million is available to download on the usual platforms