The search and rescue operation for earthquake survivors in Albania has ended, the prime minister has today confirmed, with the death toll at 50 and no more bodies believed to be in the ruins.

Prime Minister Edi Rama said preliminary figures showed more than 1,465 buildings in the capital, Tirana, and about 900 in nearby Durres were seriously damaged in Tuesday’s 6.4-magnitude pre-dawn quake.

Among the dead are eight members of the Lala family who were killed when their four-storey home was flattened by the tremor. 17-year-old Rame Lala was the sole survivor from his home.

Hundreds of tearful mourners have gathered to pay their respects at the family’s funeral. ‘Hope is the last thing that dies,’ said Asije, 40, a close relative of the Lala family.

Yesterday in the nearby town of Thumane, loved ones wept before the six victims all from the Cara family who had suffered a similar fate when their building collapsed.

About 2,000 people were injured. One woman remained in a coma, according to health officials. Preliminary figures estimate at least 4,000 people are homeless.

Mourners carry the coffins of eight family members who died during a 6.4-magnitude earthquake which killed 50 people. Prime Minister Edi Rama has announced the end of the search and rescue operation as it is believed there are no more bodies among the ruins 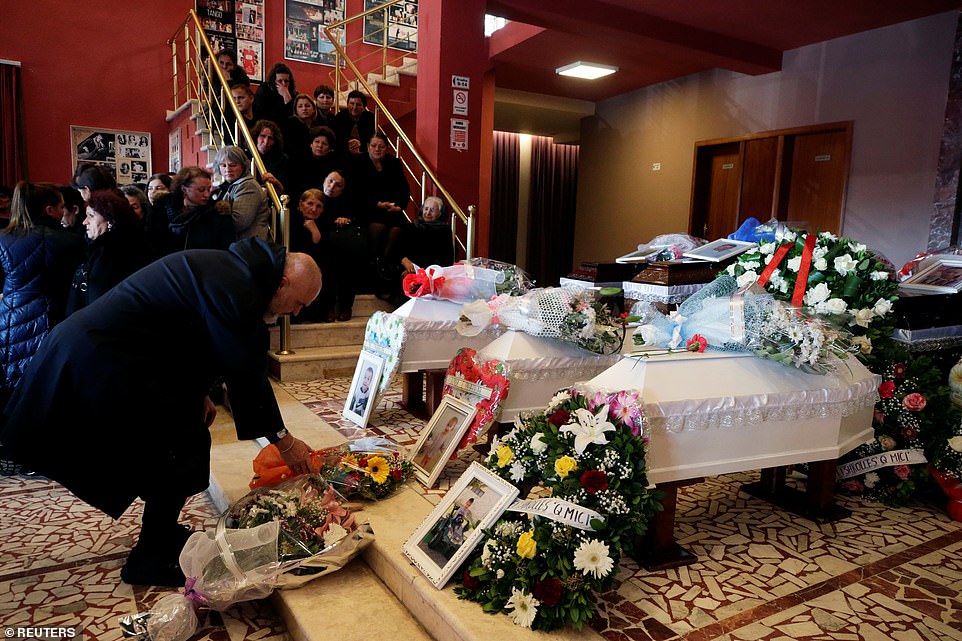 Among the dead are eight members of the Lala family who were killed when their four-storey home was flattened by the tremor. 17-year-old Rame Lala was the sole survivor from his home 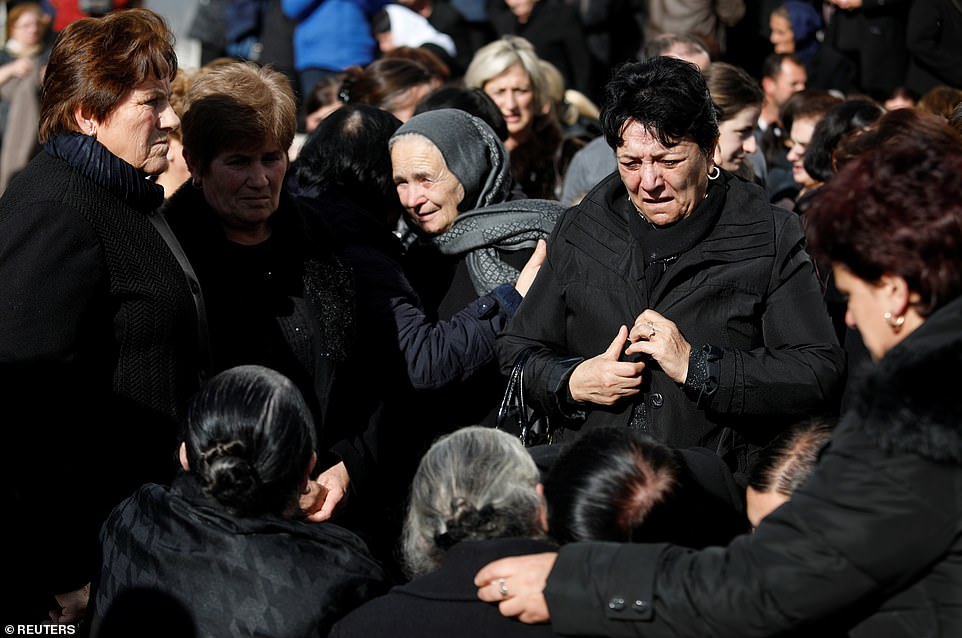 Hundreds of tearful mourners have gathered to pay their respects at the family’s funeral. ‘Hope is the last thing that dies,’ said Asije, 40, a close relative of the Lala family 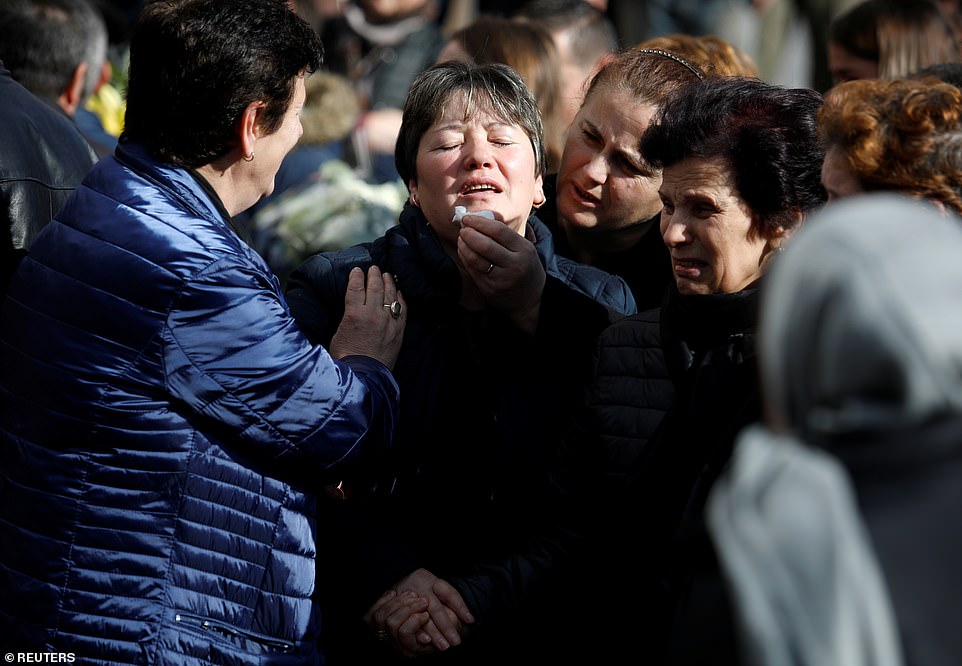 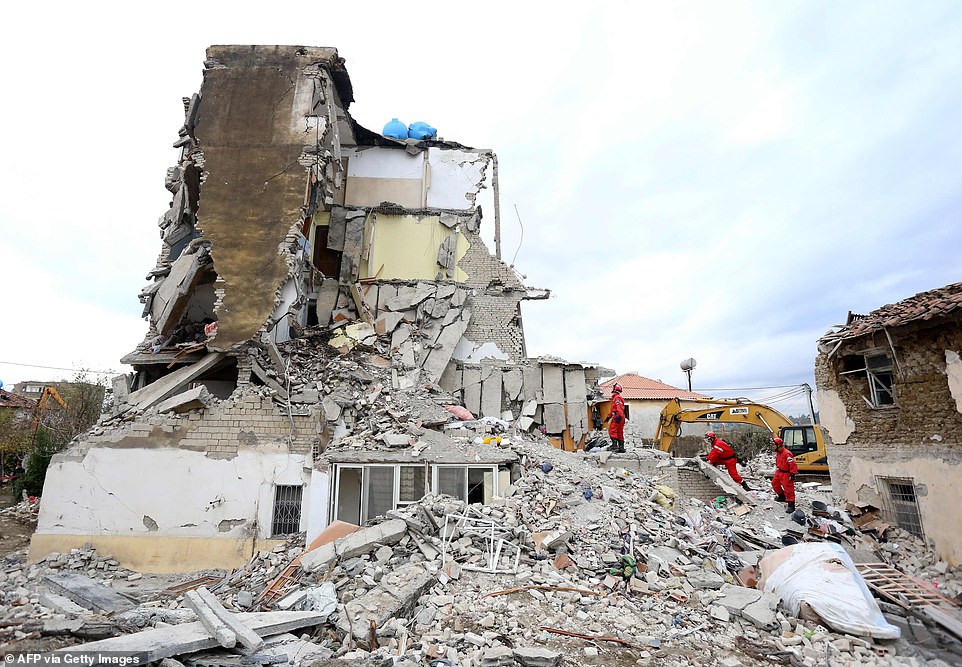 About 2,000 people were injured. One woman remained in a coma, according to health officials. Preliminary figures estimate at least 4,000 people are homeless

About 2,500 people from damaged homes have so far been sheltered in hotels. Others have been taken to neighboring Kosovo or have moved to eastern areas of Albania.

The prime minister has pledged all homeless will be in ‘stronger homes’ in 2020.

The first seriously damaged building has been demolished, and a dozen others are expected to follow. Assessment experts from Greece, France, Italy, Hungary, Bulgaria, Lithuania and Latvia are involved.

A new draft law will sentence all investors, architects and supervisors to seven to 15 years in prison for violating construction norms. That and corruption in Albania’s burgeoning building industry have been blamed for much of the quake’s effects.

The government has set up financial compensations for families of the dead, including 1 million Lek ($9,000) per family, special pensions for elders and scholarships for children.

In the town of Thumane, where numerous buildings collapsed, loved ones wept before the six wooden coffins of the Cara family and three more belonging to the Greku family.

The victims were among more than 20 people whose bodies were pulled from ruins in Thumane, where a sombre silence reigned on Friday after the frenzy of the search effort had ceased a day earlier.

‘Respect the dead,’ said Fatmir, a relative of the Cara family, shooing away media. 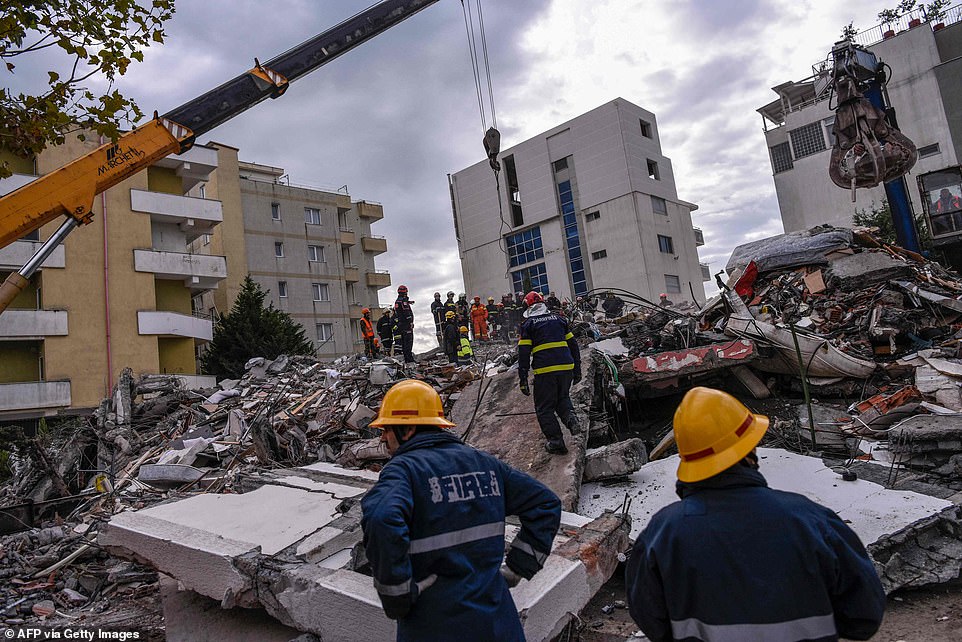 Search and rescue: Albanian firefighters search for survivors under the rubble of a collapsed building in Durres yesterday with hopes fading of finding any more people alive 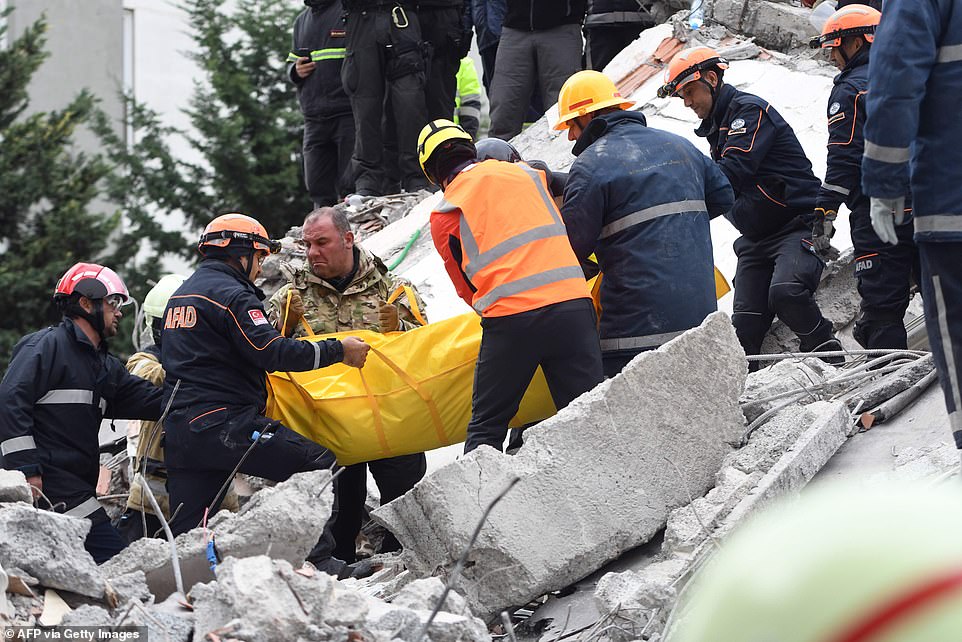 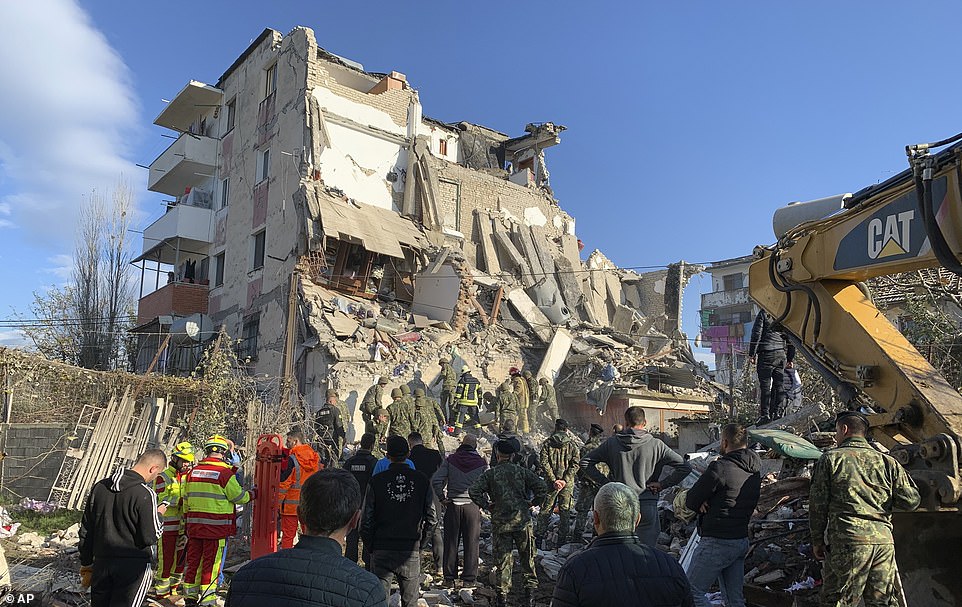 Rescuers search at a damaged building after a magnitude 6.4 earthquake in Thumane, western Albania 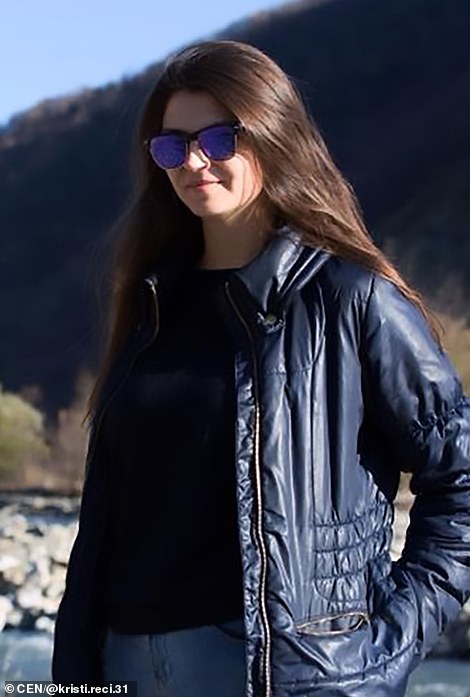 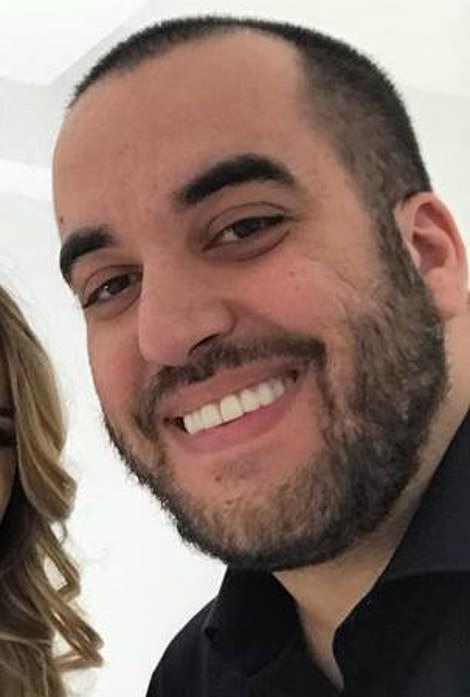 Kristi Reci (pictured left), 25, was one of the victims killed in the Albanian earthquake this week. She was the fiancee of Gregor Rama (right), the son of Albania’s prime minister

Prime Minister Edi Rama attended the funerals, kneeling down to toss dirt on the coffins in a local custom of respect.

In a message of condolences posted on Facebook, he wrote in Albanian ‘You will never be alone’.

In the other hard-hit coastal city of Durres, search efforts focused on a toppled hotel on the Adriatic shore.

Around 45 people have been rescued this week by relief teams who worked around the clock with foreign experts – who brought dogs, cameras and other equipment to comb the rubble.

Of some 750 people who were treated for injuries, three victims were flown to Italy on Friday for specialised care, among them Rame Lala, the sole survivor from his family home in Durres.

‘We have all been touched and wounded,’ Edi Rama said in the morning as Albania, one of the poorest countries in Europe, took stock of the losses.

His voice strained as he mentioned the death of a close friend of his son, a medical student whose body was found in the rubble with her brother and two parents.

Rama, who has promised to build new homes for the victims by 2020, said almost $7 million had already been received in donations.

In Durres and Thumane, almost 2,000 people have been moved into hotels or other buildings – either because of severe damage to their homes or because hundreds of aftershocks made their apartments unsafe. 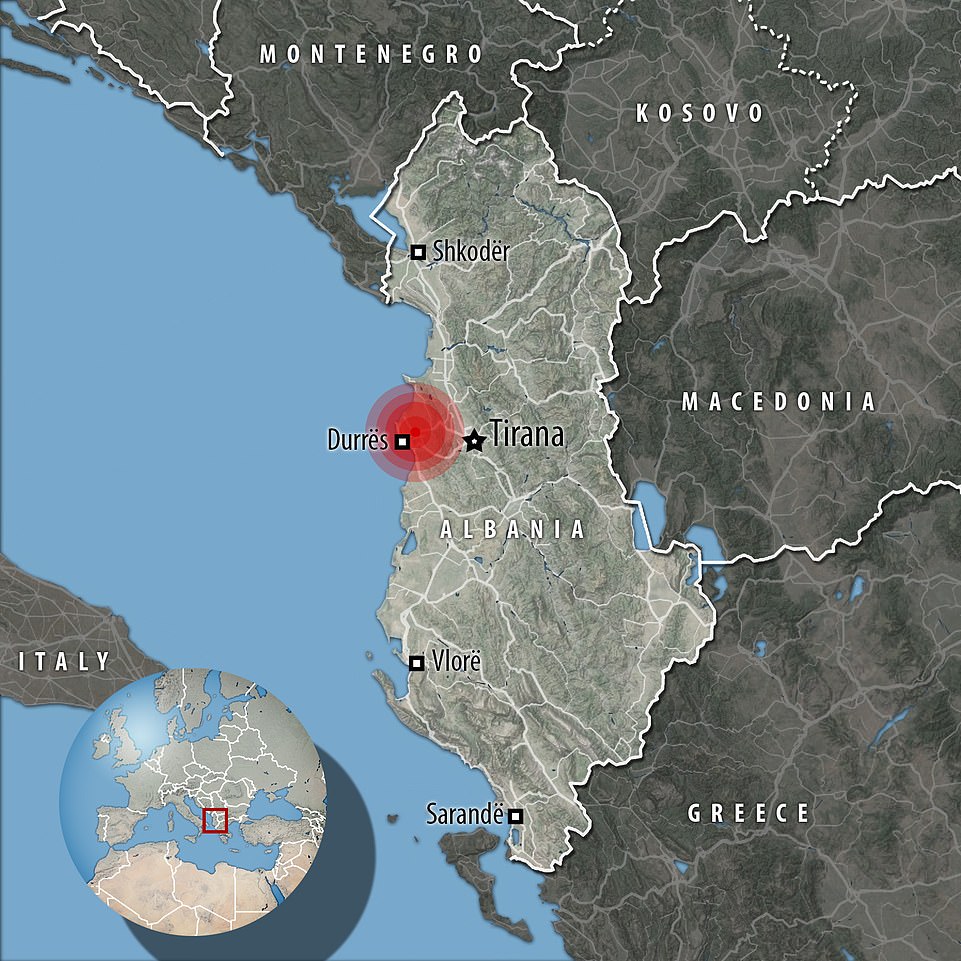 Another 3,480 people in the capital Tirana fled to shelters, with some now housed in reception centres and many staying in the homes of relatives, Rama said.

There were no casualties in Tirana but nearly 70 buildings and 250 homes were damaged.

Defence Minister Olta Xhacka urged residents to leave any homes affected by the quake, saying experts were preparing to asses the risks.

‘The situation of buildings with damaged structures is as dangerous as on the first day, so don’t stay there, leave them,’ she said.

Albania’s towns developed chaotically after the fall of communism in the 1990s.