My Feet Are Killing Me! Man with ‘cauliflower feet’ asks the doctor to consider amputation

A man whose ‘cauliflower feet’ smell like ‘rotten cheese’ asked the doctor to consider amputation, before he was given a life-changing pair of shoes in My Feet Are Killing Me!

In tonight’s episode of the TLC show, Jeff Ortega, 30, from Deerfield Beach, Florida, who suffers from Proteus Syndrome – a rare condition characterized by the overgrowth of the bones, skin, and other tissue – explains how his feet have swollen to an enormous size, making every tasks difficult.

‘My feet are both heavy, especially the left foot,’ he says. ‘It is very challenging to try to lift it and to try and manoeuvre it, because I end up falling. It’s very difficult.’

‘Proteus Syndrome is better known as the Elephant Man disease.’

Jeffrey Ortega (pictured), 30, of Deerfield Beach, Florida, who was born with Proteus syndrome, will appear in tonight’s episode of TLC’s My Feet Are Killing Me 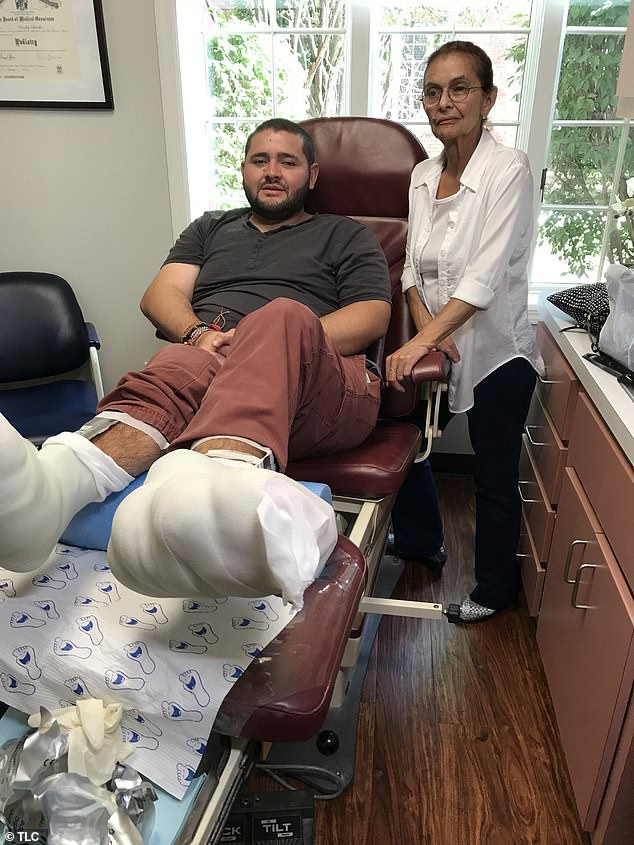 Due to the size of his feet and the pain he experiences, Jeff (pictured) is mostly confined to a wheelchair, and wearing shoes is virtually impossible

Over the past few years, Jeff’s condition has worsened, and he admits that the pain can be excruciating.

‘I can walk no more than 10 steps,’ he explains. ‘After that, the pain starts triggering. It feels like I’m walking on glass.’

Due to the size of his feet and the pain he experiences, Jeff is mostly confined to a wheelchair, and wearing shoes is virtually impossible. 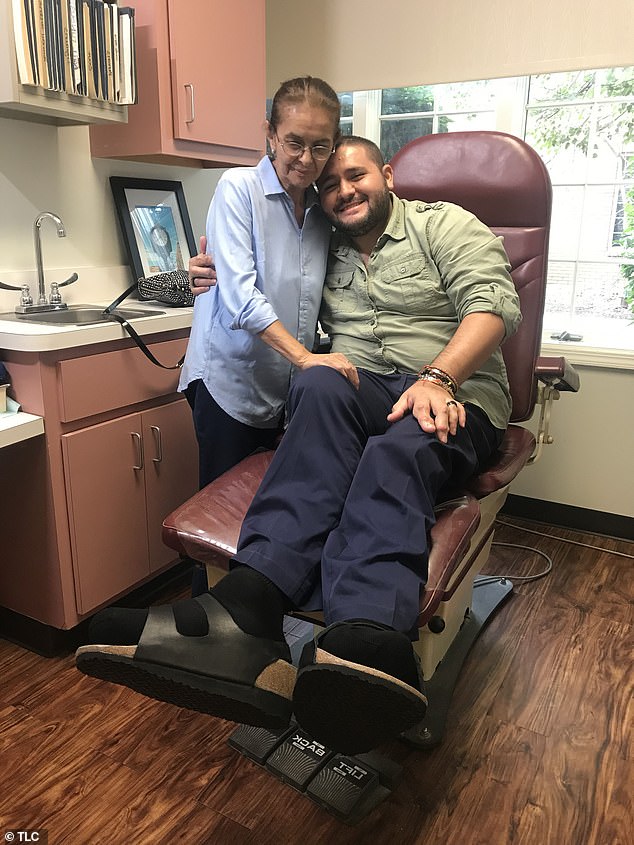 Jeff (pictured) explains his feet, especially the left foot, are really heavy, which makes them challenging to lift

Other than the pain, Jeff’s feet are a huge source of embarrassment for him.

‘If I don’t take proper care of my feet, I can easily have a lot of smell,’ he explains. ‘The smell is like rotten cheese.’

WHAT IS PROTEUS SYNDROME?

Proteus syndrome is a medical condition that leads to disproportionate growth of tissues such as bone, skin, vascular and fatty tissue.

It is a genetic condition but it is not passed on from parent to child – rather it is caused by a sporadic (out of the blue) mutation or change in a gene called AKT1.

The AKT1 gene is responsible for the growth, division and death of cells and the mutation causes the cells to overgrow.

Proteus syndrome is a ‘mosaic’ condition, that is, some cells contain the mutated gene but others do not, which causes the overgrowth to affect only parts of the body. It is a very rare condition.

The main feature of Proteus syndrome is asymmetrical overgrowth of parts of the body. This overgrowth is often not present at birth but may become more noticeable over time.

In addition to overgrowth, children with Proteus syndrome may have distinctive facial features with a long face, low nasal bridge, large nostrils and downturned outer part of the eye.

Some children have seizures, vision problems and learning difficulties.

Having consulted multiple doctors, Jeff is at a loss, and has given up on his dream of becoming a professional football player.

‘It hurts because seeing athletes who have regular feet, regular movements, they can score a goal and celebrate,’ he admits. ‘I wish I was that person. I wish I was able to score a goal. Maybe someday, but not in this life.’

In one last attempt to get help, Jeff visits Dr Brad Schaeffer’s New Jersey clinic to see if he can give him a better quality of life. But after removing his socks, the expert is blown away by the size of Jeff’s feet.

‘Jeff’s feet the largest I’ve personally have seen,’ he says. ‘The tissue does almost balloon out. It looks like cauliflower. Some of Jeff’s toes look like golf balls.’

After undergoing a staggering 11 surgeries, Jeff’s no closer to having the quality of life he deserves, and Dr Schaeffer sympathises with him.

‘You’ve been through it, my friend,’ he says.

Taking Dr Schaeffer by surprise, Jeff ponders over a final, drastic solution and asks: ‘Do you think, maybe, amputation could be a solution?’

‘It wouldn’t be something that I would be personally do, I have seen that the bones do continue to grow even after you would do an amputation,’ he says. ‘Sometimes they can even be sharp, and cut through the skin.’

Having managed Jeff’s expectations, the expert decides to create molds of Jeff’s feet.

Six weeks after his initial consultation, Jeff returns to Dr Schaeffer’s clinic. Walking into his office, Dr Shaeffer surprises him with a brand new, custom made pair of sandals – his first pair of new shoes in seven years. 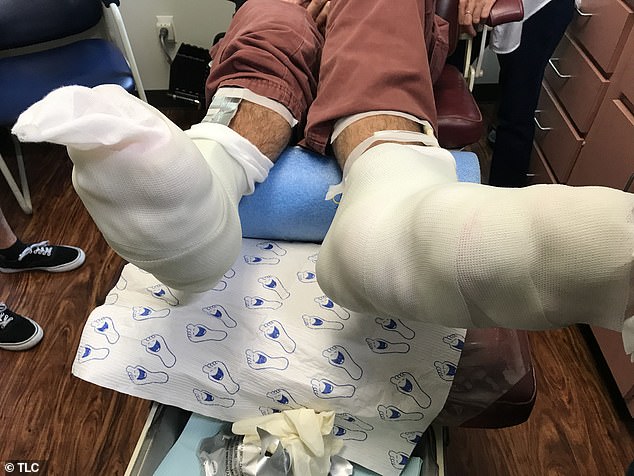 Dr Brad Schaeffer says Jeff’s feet (pictured) the largest he has personally seen, adding: ‘The tissue does almost balloon out. It looks like cauliflower. Some of Jeff’s toes look like golf balls’

‘I’m, like, blown away,’ an emotional Jeff says, holding back the tears. ‘It feels like a dream come true, honestly. They feel amazing!’

Delighted, Dr Schaeffer hopes that the sandals will help improve Jeff’s quality of life, allowing him to walk around more comfortably and freely.

‘What I really wanted to do was find something really easy put on so he could walk around the house safe.’

Walking around in his new shoes, Jeff feels more comfortable than he has done in years.

‘I don’t feel like I’m about to fall,’ he says. ‘I feel like I am walking on clouds, there’s no actual right wears to describe how I feel!’