Nasa competition finalists have revealed the 3D-printed habitats they believe could be used to colonise the red planet in the coming decades.

Not only do these proposed designs have to look the part, but the competition stipulates they also have the right thickness, heating and pressure to withstand the extreme conditions on Mars.

Of the 18 teams from across the world that entered the competition, five have been taken to the next stage of the competition, which sees them tasked with creating a one-third-scale 3D-printed model of their final design.

There is a $2 million (£1.5m) prize for the winner of the competition, with the final models set to be completed by spring 2019.

Nasa competition finalists have revealed their incredible 3D-printed habitats that could be used to colonise the red planet. Pictured is the entry from Team Zopherus of Rogers, Arkansas. They received $20,957.95

Nasa partnered with Bradley University of Peoria, Illinois to select the top five teams to progress to the next stage of the 3D-Printed Habitat Centennial Challenge competition.

The prize money was awarded to the five teams based on scores assigned by a panel of experts from Nasa, academia and industry.

In total, 18 teams from all over the world entered the competition. Entrants were assessed on the completeness and layout of the habitat, as well as how easily the design could be 3D-printed on the surface of the red planet.

‘We are thrilled to see the success of this diverse group of teams that have approached this competition in their own unique styles,’ said Monsi Roman, program manager for Nasa’s Centennial Challenges.

‘They are not just designing structures, they are designing habitats that will allow our space explorers to live and work on other planets.

‘We are excited to see their designs come to life as the competition moves forward.’

The 3D-Printed Habitat Challenge aims to further the progression of sustainable shelters that will someday occupy the moon or Mars. 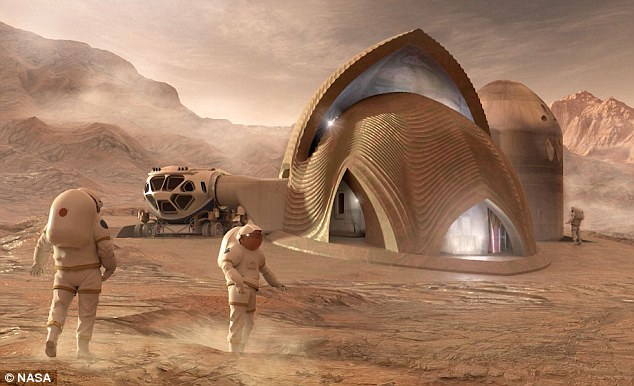 Not only do these final designs look good but they also have the right thickness, heating and pressure to withstand extreme Martian conditions. Pictured is the entry from SEArch+/Apis Cor from New York. They received $19,580.97 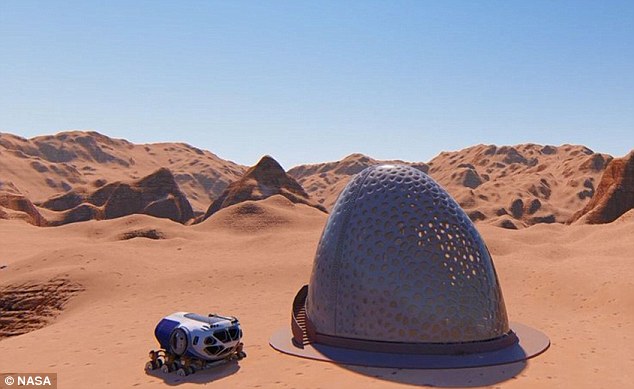 Now the five teams still in the competition have to create a one-third-scale printed habitat of their final design. Pictured is the entry from Kahn-Yates of Jackson, Mississippi, who received $20,622.74

The challenge was first launched back in 2014.

For the first competition, Nasa required teams to submit architectural renderings of their habitats by early 2015.

The second part of the contest, known as Phase Two, was the ‘Structural Member Competition’, which focused on material technologies and required teams to create structural components for their design. This was completed in 2017.

Competitors have to construct three levels and two virutal levels. 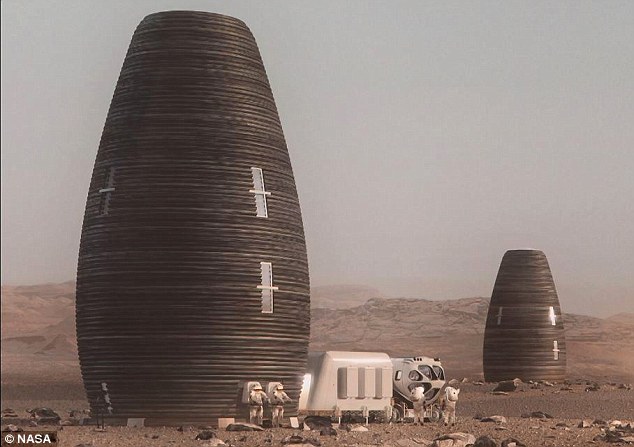 Pictured is the entry from Northwestern University of Evanston, Illinois, who received $17,881.10. Phase one was the Design Competition which required teams to submit architectural renderings completed by 2015

For the virtual levels, teams must use Building Information Modelling software to design a habitat.

‘We are encouraging a wide range of people to come up with innovative designs for how they envision a habitat on Mars,’ said Lex Akers, dean of the Caterpillar College of Engineering and Technology at Bradley University, Nasa’s partner in this challenge.

Experts increasingly believe humans could live on Mars within our lifetime.

Humans will ‘absolutely’ be on Mars in the future, he told USA Today in an interview.

Researchers hope to have a human on the planet by 2040, though that is dependent on quite a few factors, according to Dr Green.

For a human to land on Mars, it needs to be possible to land about 10 tons of material on the surface. Right now, Nasa has been able to land a one ton vehicle.

Nasa also needs to develop the technology to blast off from Mars and return to Earth, something the space agency plans to test with its rover in 2020.

However, the largest obstacle facing a manned trip to Mars is the task of building an entire infrastructure to sustain life.

‘The people that would go there are real pioneers,’ Dr Green said.

Humans who travel to Mars would need to farm and establish sources of food.

In 2017, Congress’s Nasa authorisation bill required Nasa to define and deliver to Congress a step-by-step plan for reaching Mars.

However, the space agency has yet to deliver, leaving some to conclude that plans are falling drastically behind.

‘Forget the scenario of getting to Mars by the 2030s. It would take us until 2050,’ said Senator Nelson, a Democrat from Florida, which is home to Cape Canaveral and the Kennedy Space Center, during a hearing last week in Washington.

In 2009, an independent expert panel known as the Augustine Commission warned that Nasa’s resources did not match its lofty goals.