When astronauts one day step foot on the red planet for long-term exploratory missions, they’ll be up against an invisible adversary – space radiation.

While much is known about the consequences of radiation here on Earth, the conditions beyond our home planet create a different set of challenges, so relying on the same protective methods could ultimately make exposure worse.

NASA scientists are now working to determine just how this radiation affects the human body, and develop ways to protect against the violent ‘nuclear collisions’ that occur as high-energy particles slam into shielding and human tissue.

While much is known about the consequences of radiation here on Earth, the conditions beyond our home planet create a different set of challenges, so relying on the same protective methods could ultimately make exposure worse. An artist’s impression is pictured

Space is home to particle radiation.

And, it has ‘sufficient energy to collide violently with the nuclei that make up shielding and human tissue.’

These collisions, known as nuclear collisions, can then give rise to new particles as the incoming radiation and shielding nuclei break up.

According to NASA, there are three sources that give rise to space radiation.

‘One of our biggest challenges on a mission to Mars is protecting astronauts from radiation,’ said NASA Space Radiation Element Scientist Lisa Simonsen, PhD.

‘You can’t see it; you can’t feel it. You don’t know you’re getting bombarded by radiation.’

According to the researchers with NASA’s Human Research Program (HRP), space radiation is very different from that experienced on Earth.

While using a heavy, lead blanket to protect against X-rays at the dentist, for example, may be effective on Earth, heavy materials can worsen the effects of space radiation.

This is because space is home to particle radiation, as opposed to electromagnetic radiation.

‘In space, there is particle radiation, which is basically everything on the periodic table, hydrogen all the way up through nickel and uranium, moving near the speed of light, said NASA Research Physcist Tony Slaba, PhD.

‘NASA doesn’t want to use heavy materials like led for shielding spacecraft because the incoming space radiation will suffer many nuclear collisions with the shielding, leading to the production of additional secondary radiation.

‘The combination of the incoming space radiation and secondary radiation can make the exposure worse for astronauts.’

There are three main sources of space radiation, according to the experts.

But, those associated with galactic cosmic rays (GCRs) are of greatest concern.

This type of radiation comes from supernovae beyond our solar system – or the explosive death of stars.

And, GCRs are the most harmful to the human body.

As scientists work to develop countermeasures to space radiation, GCRs are the main focus, according to NASA. 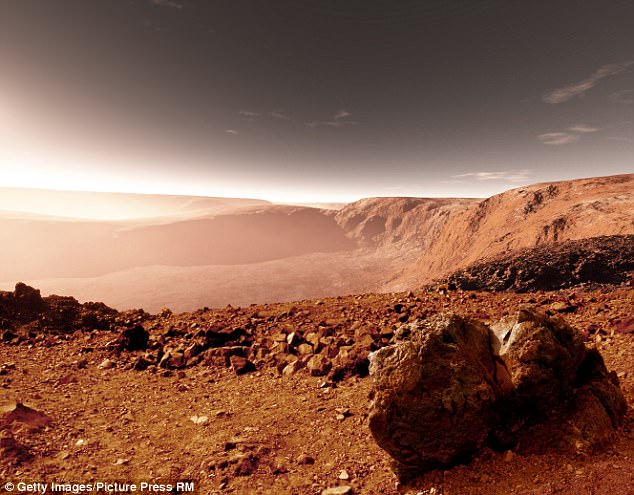 When astronauts one day step foot on the red planet for long-term exploratory missions, they’ll be up against an invisible adversary – space radiation. An artist’s impression of Mars is pictured

While researchers at NASA’s Space Radiation Laboratory investigate the effects of ionizing radiation, simulating space radiation on Earth remains a challenge, as the doses in this setting could be more concentrated, and appear over a shorter timeframe than would be experienced in space.

Still, understanding these consequences will be a key step in future exploration, as space agencies and private companies set their sights on extended missions to the moon and Mars.