Nationwide Building Society has named TSB boss Debbie Crosbie as its new chief executive, replacing the outgoing Joe Garner early next near after five years at the helm.

Crosbie will also become the first woman to become an executive director at Nationwide when she takes charge early next year, having been selected by the building society’s chairman elect Kevin Parry.

The Mail on Sunday revealed in October that Crosbie was shortlisted for the top job at Nationwide, following Garner’s shock announcement in September that he intended to step down.

Crosbie, 51, was parachuted into TSB in May 2019, months after the departure of former boss Paul Pester following the bank’s disastrous technology meltdown that left thousands of customers temporarily locked out of their accounts.

The Scottish boss, who came from Clydesdale and Yorkshire Bank Group, has brought TSB back from the red.

The bank, which was bought by Spanish lender Sabadell in 2015, reported on Friday a pre-tax profit of £110million this year, compared to a £152million loss last year. However, it also revealed another 70 branch closures – taking the network from more than 600 when TSB relaunched to 220.

Crosbie’s three-year growth strategy, released in 2019, led to investment in digital services and the cutting of costs by closing branches.

She is also currently a non-executive director of SSE and a member of the Prudential Regulation Authority’s Practitioner Panel.

Outgoing CEO Garner has been vocal on his opposition to the proposed demutualisation of LV, via its controversial takeover by US private equity house Bain Capital. 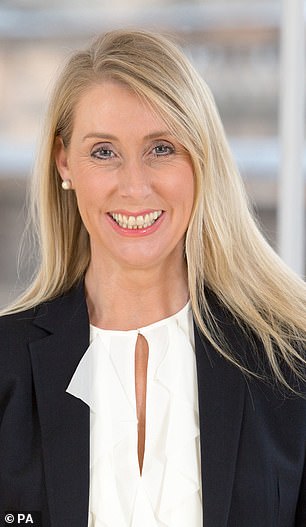 Crosbie: ‘Nationwide’s mutual status, combined with its trusted brand and market-leading customer service, make it a purposeful and unique force for good.;

Garner pointed to crises at other mutuals that have undergone a similar process such as Northern Rock, Alliance & Leicester, Bradford & Bingley, Halifax.

He said: ‘I think we’re pretty clear on what the better route is.’

It follows a strong final trading period for Nationwide under Garner’s leadership, with the building society doubling profits to £853million in the six months to the end of September.

Chairman of Nationwide David Roberts, who is also stepping down in the new year, said the board would ensure ‘an orderly and timely transition’ to Crosbie’s leadership, with the new boss joining a building society ‘that is in excellent health’.

He added: ‘The growth in our membership coupled with our superior service and underpinned by our financial strength is a solid foundation to continue growing the Society and ensuring we are ready to meet the future needs of our members.’

Crosbie said: ‘Nationwide’s mutual status, combined with its trusted brand and market-leading customer service, make it a purposeful and unique force for good.

‘I’m delighted to be asked to lead the Society in its next phase of growth and to work with its members and colleagues to make it the leading retail financial services provider in the UK.’