Nature: Albatrosses can plunge up to 62ft underwater after prey-more than twice as deep as thought

Talk about a deep dive! Albatrosses can plunge up to 62ft underwater to pursue prey—more than twice as deep as previously thought, study reveals

Black-browed albatrosses can plunge up to a whopping 62 feet (19 metres) into the sea in pursuit of their prey — more than twice the depth previously thought.

This is the conclusion of University of Oxford-led experts who used accelerometers, depth sensors and GPS to study the population on New Island, in the Falklands.

They monitored the birds as they commuted to the South American coast.

Past studies had indicated that mollymawks — the name given to such medium-sized albatrosses — only dive shallowly, to a maximum of around 20–30 feet (6–9 m).

However, the team found that half of the black-browed albatrosses studied could dive deeper than 33 feet (10 m) — with some reaching nearly twice this depth.

Lifespan: Up to 70 years

‘A better understanding of the unobserved behaviour of the albatross and other endangered seabirds is essential to conservation efforts,’ said Dr Padget.

According to the researchers, 15 of the 22 albatross species are currently at risk of extinction, with populations having plummeted over recent decades.

One key drivers of their decline has been how such seabirds can end up caught in the hooked, baited fishing longlines used to target large ocean-going fish like tuna.

With albatrosses having been considered as surface feeders only — sporting a powerful sense of smell and only a shallow diving ability — traditional approaches to protect the birds have focussed on protecting the birds as the lines are initially sunk.

For example, some fishers use weights to ensure their lines drop to the target depth faster — or use so-called hookpods that cover the barbs on the lines.

‘That black-browed albatross are physically capable of such deep dives will now need to be considered when thinking about the effectiveness of mitigation strategies that rely on the species being restricted to the surface.’

The team also noted that the black-browed albatrosses did not dive at night — suggesting that the birds rely on their vision to pursue shoals of fish at depth.

‘We found that deep diving was restricted to daylight hours,’ added Dr Padget.

‘So one potential mitigation could be for pelagic long lines to be set at night when albatross might be less likely, or able, to chase baits and become caught.” 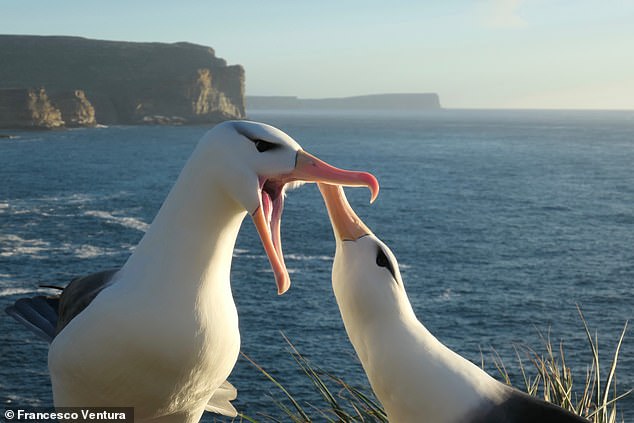 The team found that half of the black-browed albatrosses studied could dive deeper than 33 feet — with some reaching nearly twice this depth. Pictured: two of the birds on New Island

‘Diving in this population could be the result of previously unseen behavioural flexibility,’ said paper author and animal behaviour expert Tim Guilford of the University of Oxford.

Given this, he added, the findings may ‘have important consequences for how we think about the risks to threatened species, and how they might respond to change.’

University of Oxford-led experts used GPS sensors, accelerometers and depth recorders to study the population of black-browed albatrosses living on New Island, in the Falklands

Albatross is a documentary released in April 2018 and created by American photographer and filmmaker Chris Jordan on Midway Island in the North Pacific ocean.

It began in 2008 as a collaboration with activist and photographer Manuel Maqueda.

They learned of an environmental tragedy taking place on the tiny atoll, which they first visited in September 2009.

Their team photographed and filmed thousands of young albatrosses that lay dead on the ground, their stomachs filled with plastic.

They returned the island a total of eight times over eight years, capturing more than 400 hours of footage.

In the process, they documented the devastation they encountered.

Writing on the film’s website, they said ‘The experience was devastating, not only for what it meant for the suffering of the birds, but also for what it reflected back to us about the destructive power of our culture of mass consumption, and humanity’s damaged relationship with the living world.

‘We experienced the birds’ beauty, grace, and sentience more and more vividly with each trip.

‘We learned to attune ourselves to their body language, so that we could film them up close without causing them anxiety. They allowed us to witness their most tender moments at astonishingly close range.

‘The poetry of the albatross revealed itself layer by layer, as my team and I were gifted with intimate footage of every stage of their cycles of life, death, and birth.’