This is the moment a walrus aggressively slaps another walrus on its back during a performance at a polar ocean park in China.

The footage taken on a spectator’s phone shows the large sea dweller sitting on a stage while visitors at Quancheng Ocean Polar World in eastern China.

Another walrus walks past and suddenly slaps it with it’s flipper, prompting the sitting walrus to retaliate by slapping him on the back about five times.

The shows presenter can be seen following the walrus as it leaves the stage and placing his hand on the other walrus’s chest to stop him attacking.

The video was posted online with the caption: ‘Naughty walrus slaps its friend at ocean park.’

Walruses are a large flippered marine mammal similar to seals but larger with protruding tusks- which can grow up to a metre long- and blubbery skin. They are light brown in colour but as they get older they turn a rusty red or pinkish colour.

They mainly come from the Atlantic and Pacific ocean and mainly live on small aquatic creatures. 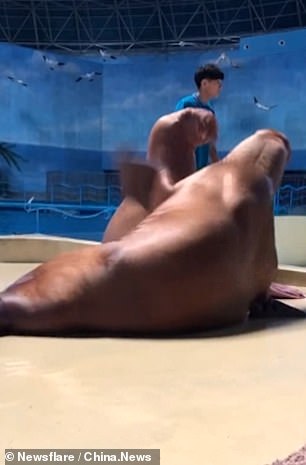 The walrus slaps the sitting walrus who retaliates by returning the slap fives times on its back as it exits the enclosure, causing the presenter of the show to intervene

The incidents in which a walrus has attacked a human or another walrus in the wild are rare; only when protecting their offspring, as a reaction to stress, during mating season or being ‘overly friendly’.

In 2016, a walrus killed a spectator and a zookeeper at a zoo northeast China.

The tourist approached the large mammal to get a closer look but lost his footing and fell into the pool.

The walrus immediately raced over to him and crushed him under its body weight.

The animal’s long-term trainer jumped into the water to save the tourist but he too was dragged under and was killed.

The Xixiajou Wildlife Park said it was ‘playful behaviour’ gone awry and that the walrus was usually gentle and friendly towards humans. 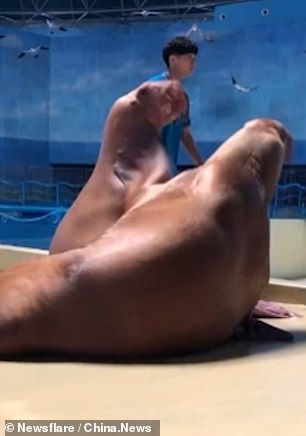 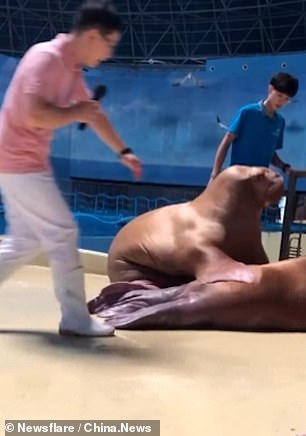 Many captive pinnipeds experience ocular damage, as tanks rarely allow for much shade from the harsh sun.

Animals are often forced to look directly up into the sunlight in order to beg for or catch food.

Walrus’ tusks are also frequently removed in captivity as they have a tendency to break or damage them on the concrete of their enclosures, which can lead to infection.