Nazanin Boniadi was elegantly chic as she attended SAF-AFTRA Foundation’s Lord Of The Rings Q&A event in New York City earlier on Thursday.

The talented beauty, 42, donned a form-fitting black dress that clung to her fit physique as she joined the special panel discussion.

A few of her fellow co-stars also stopped by the Robin Williams Center to take part in the event, such as Cynthia Addai Robinson and Benjamin Walker.

Stunning: Nazanin Boniadi, 42, showed off her fabulous figure in a black, ruched dress as she attended the SAG-AFTRA Foundation’s Lord Of The Rings Q&A session in New York City

The General Hospital alum opted for long, black dress consisting of ruched material. The off-the-shoulder gown fell down towards her ankles and showed off her fit physique.

The actress slipped into a pair of black, open-toed platform heels that were secured with straps.

Her hair was slicked back into a tight ponytail, allowing her locks to fall behind her in light waves. 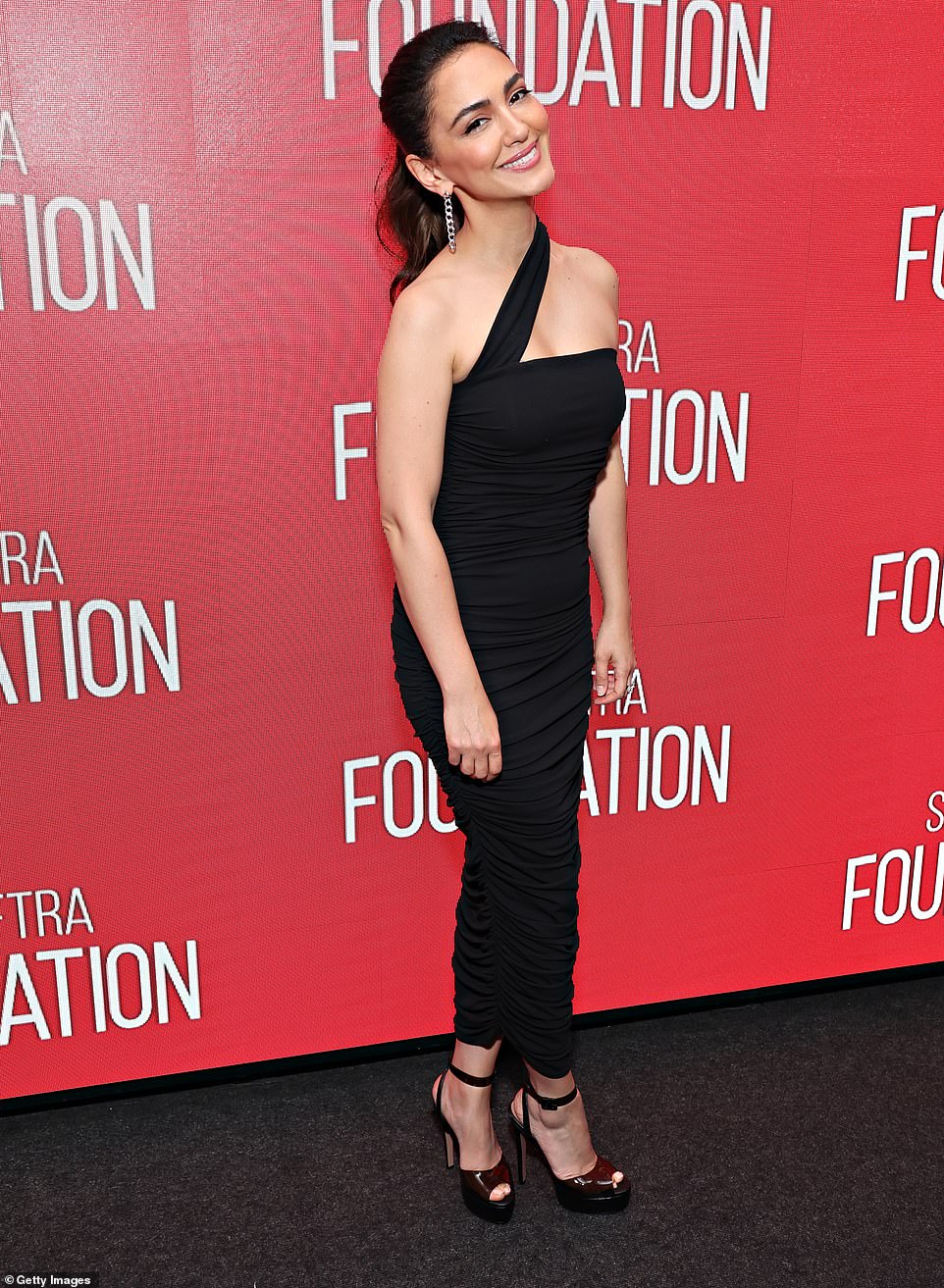 Big smile: The actress portrays the character of Bronwyn in the hit Amazon series, Lord Of The Rings: The Rings Of Power 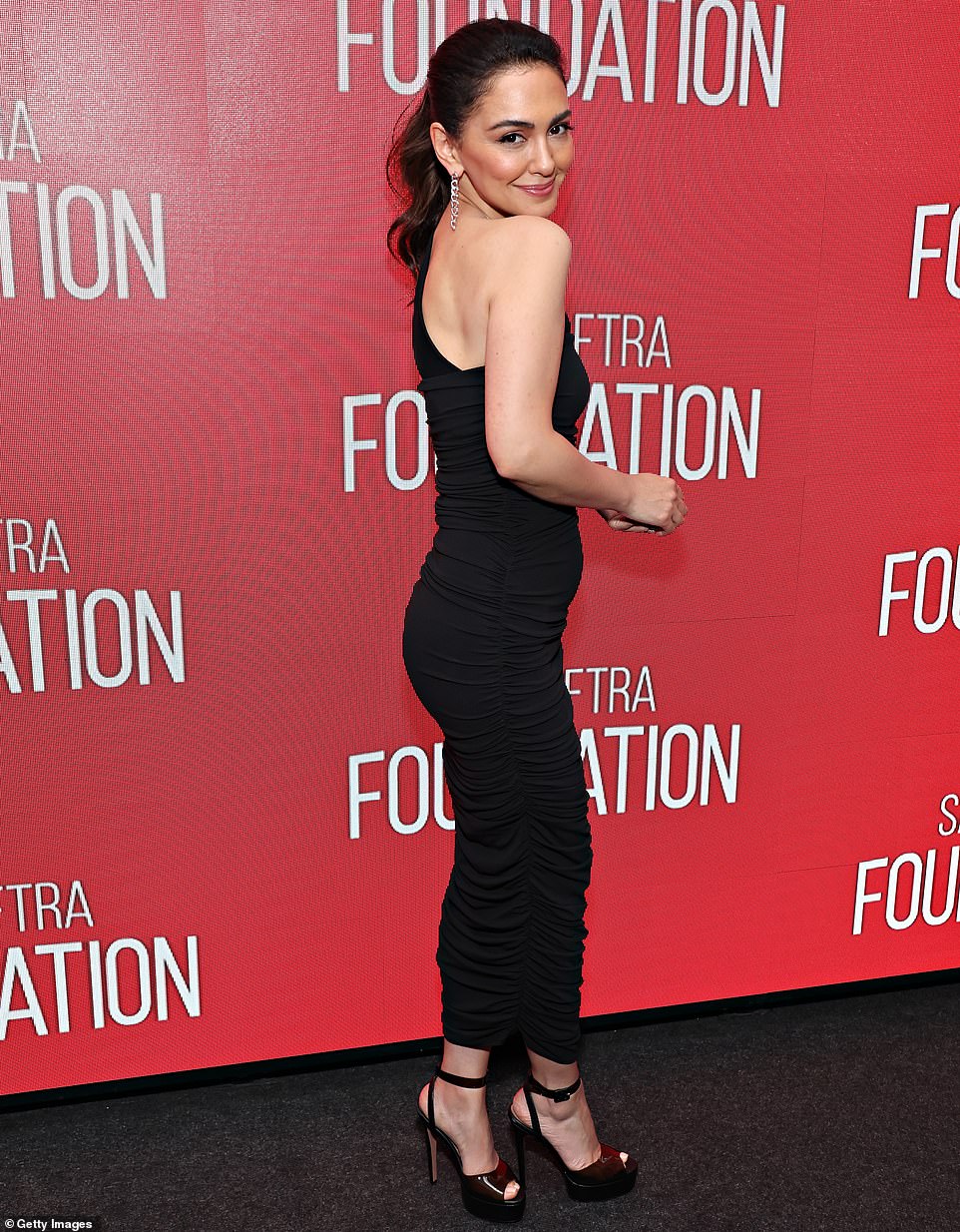 Excited: The beauty was all smiles as she attended the event and appeared to be in high spirits to take part of the special Q&A session with attendees

During an interview on the Collider Ladies Night podcast, the How I Met Your Mother star explained the process of getting her role of Bronwyn.

‘It was a very long process. It was months and months,’ she explained, adding she only had three weeks to move to New Zealand for filming once she was informed she had officially been cast. ‘And, of course, I was beyond happy to and excited and felt so blessed.’

The event which was put together by the SAG-AFTRA Foundation comprised of a screening of the sixth episode of the first season, followed by a special Q&A session with a few of the cast members of the Amazon series.

Along with Nazanin, other co-stars that stopped by were Cynthia Addai-Robinson and Sara Zwangobani. 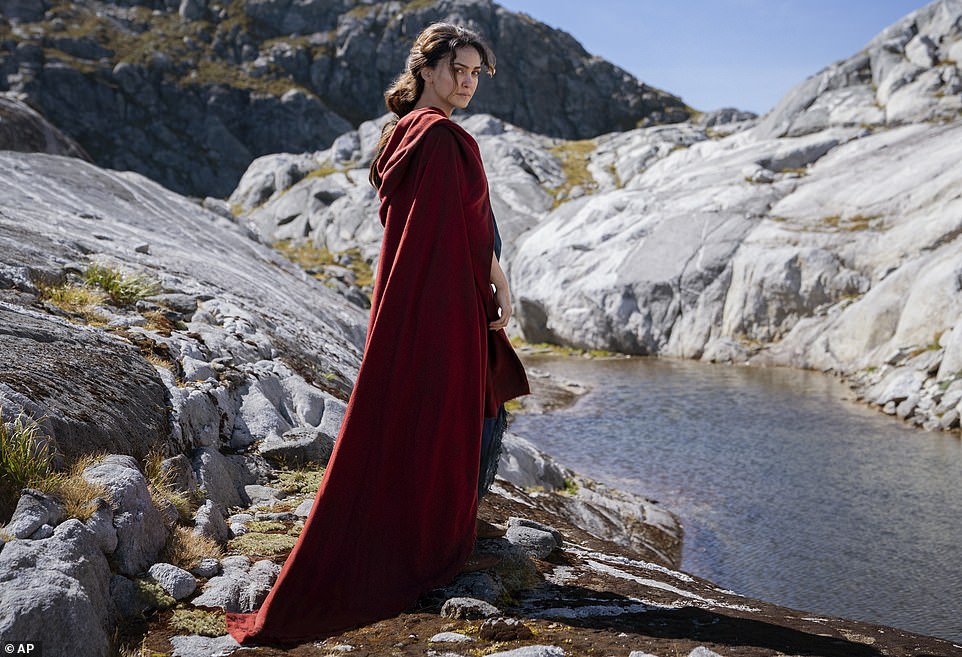 Portrayal: Nazanin pictured portraying her character of Bronwyn on set of The Rings Of Power 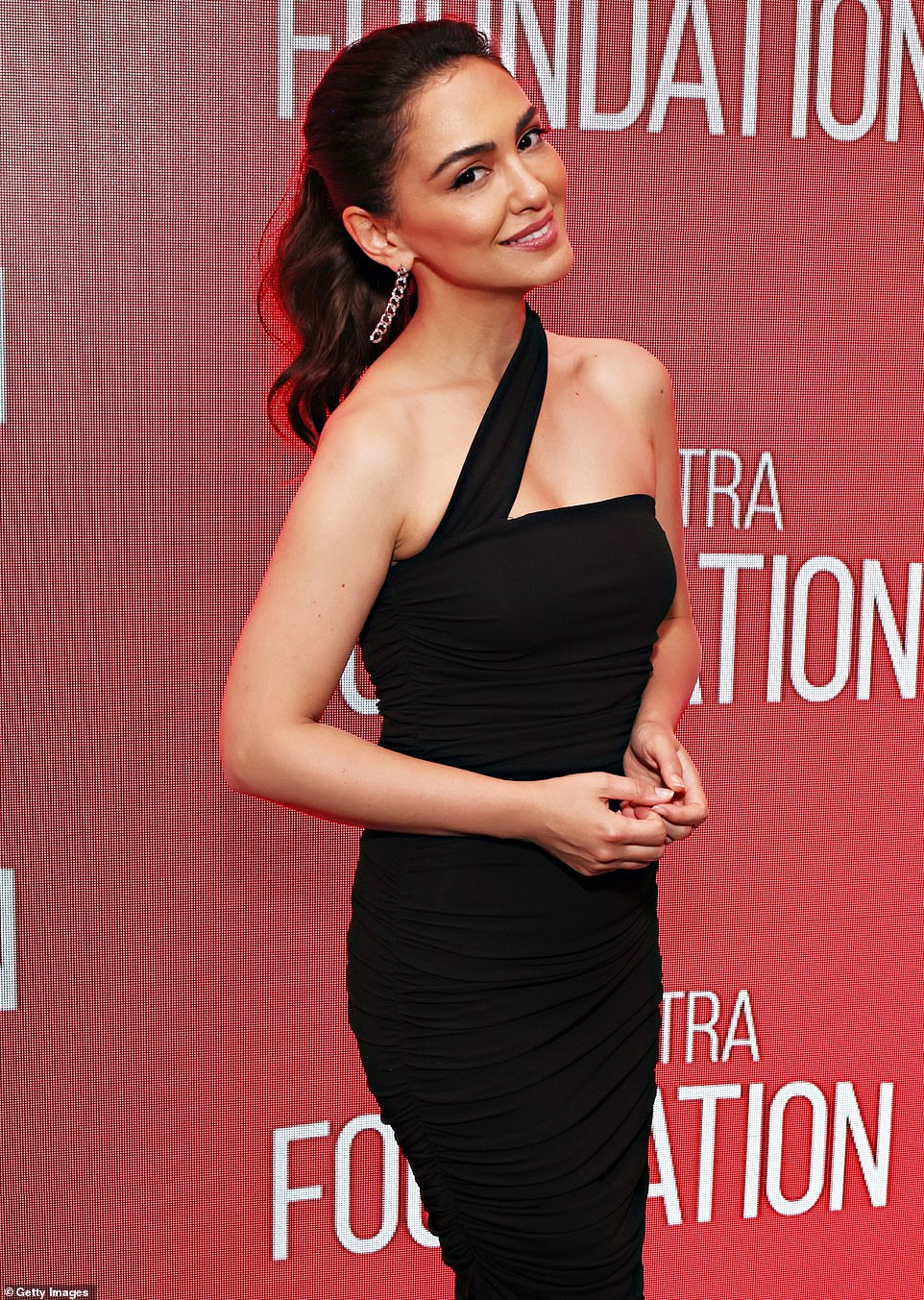 Talented: Nazanin has worked on numerous projects in the past, such as Iron Man, General Hospital, and Iron Man 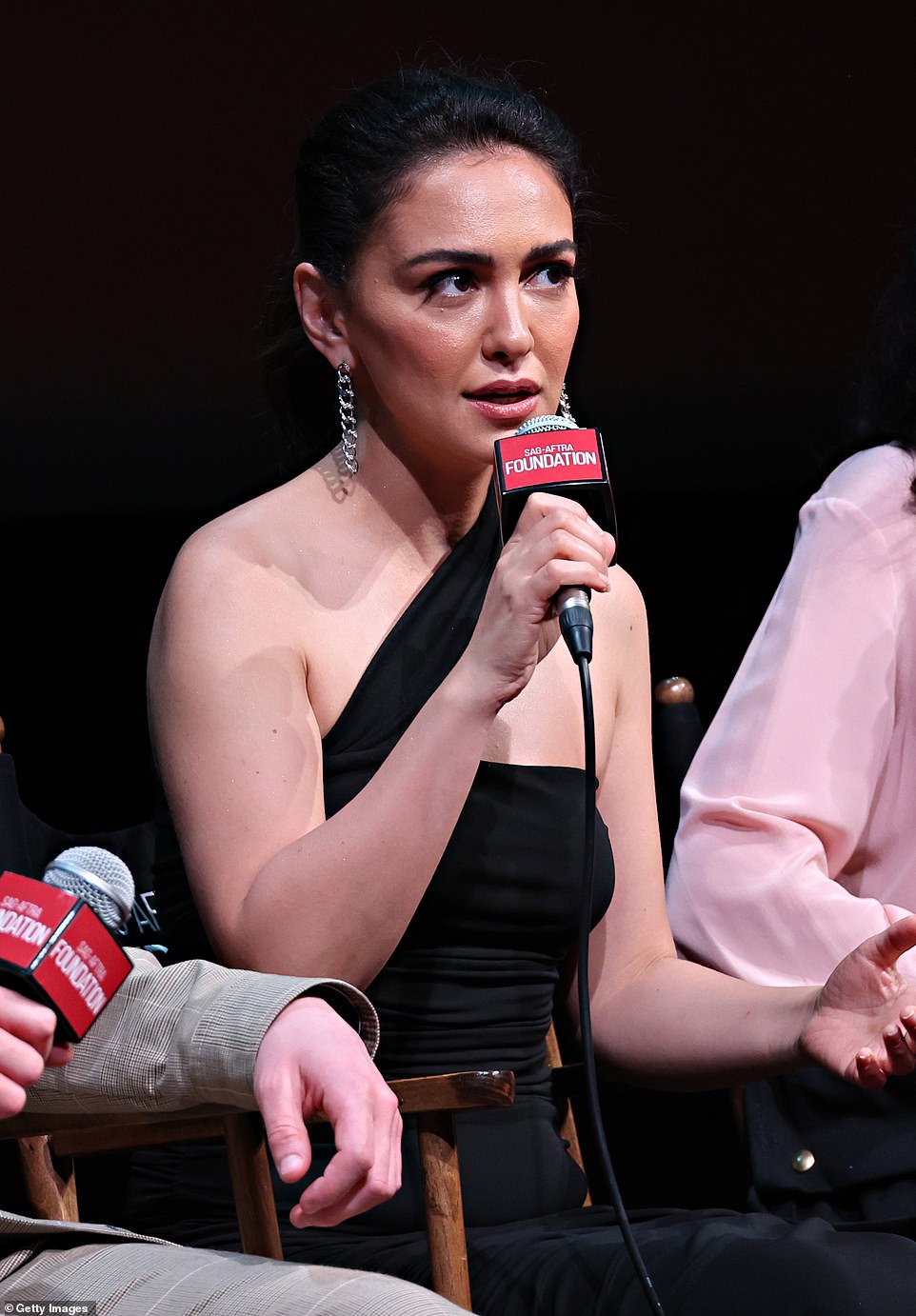 Opening up: The stunning actress answered numerous questions from attendees about the Amazon series, The Rings Of Power

Cynthia, who plays the role of Queen Miriel in the show, opted for color and wore a vibrant blue suit comprising of slacks and a blazer.

Her hair was parted to the side, and flowed down past her shoulders in natural waves. She slipped into a pair of open-toed, white heels to complete her overall look for the day.

Sara was also spotted at the Q&A session on Thursday, and turned heads in a pink and black ensemble.

She donned high-waisted, baby pink slacks and a long-sleeved blouse of the same color. The star slipped into a pair of close-toed, black heels with thin straps secured at the ankles.

Her brunette hair was parted to the side, allowing her locks to gently fall past her shoulders in stylish curls. 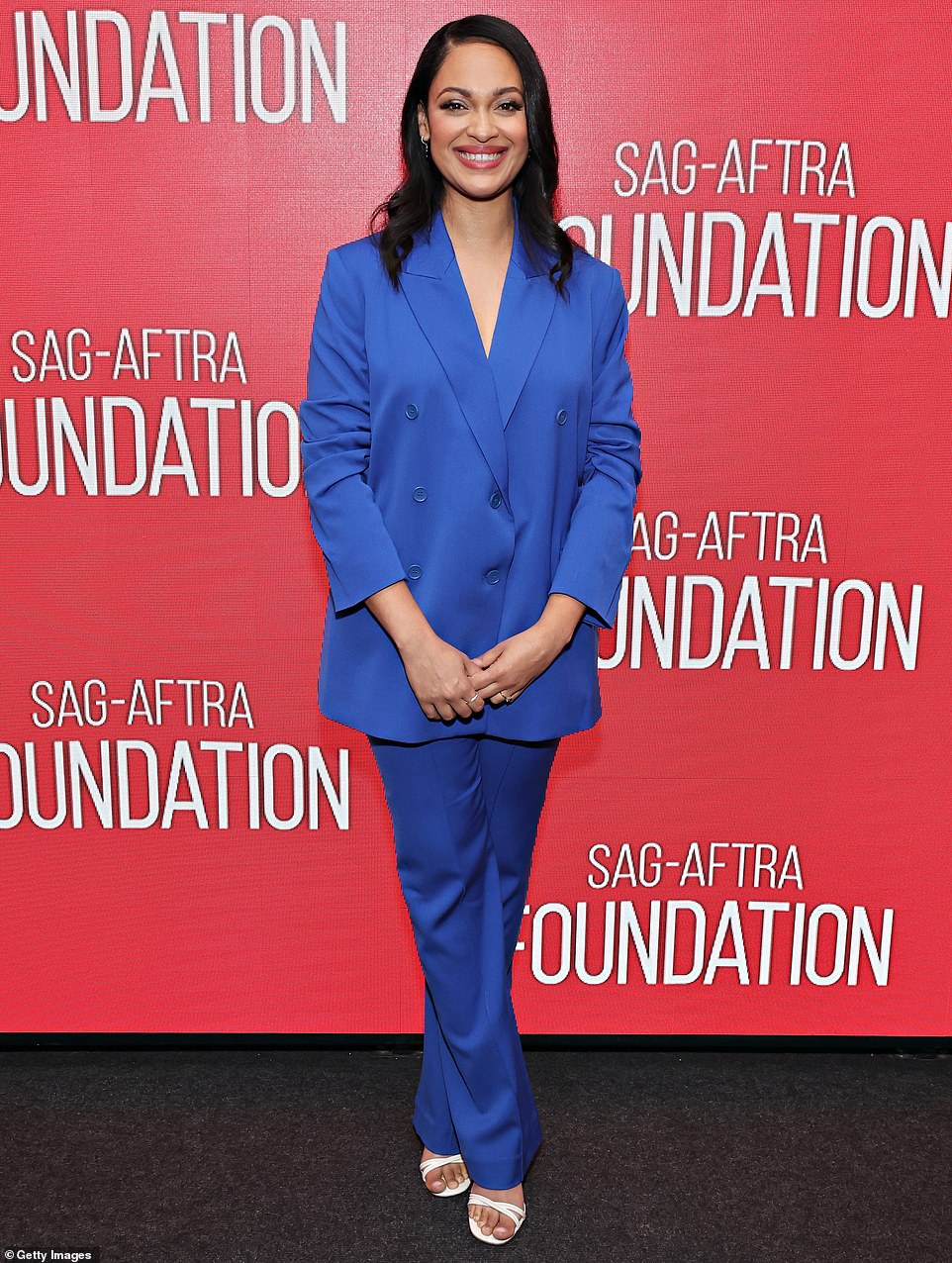 Beautiful: Cynthia Addai-Robinson donned a vibrant pink blazer and matching slacks as she attended the special event on Thursday

Wow! Cynthia is seen in a dramatic scene as she portrays the character of Queen Miriel in the series 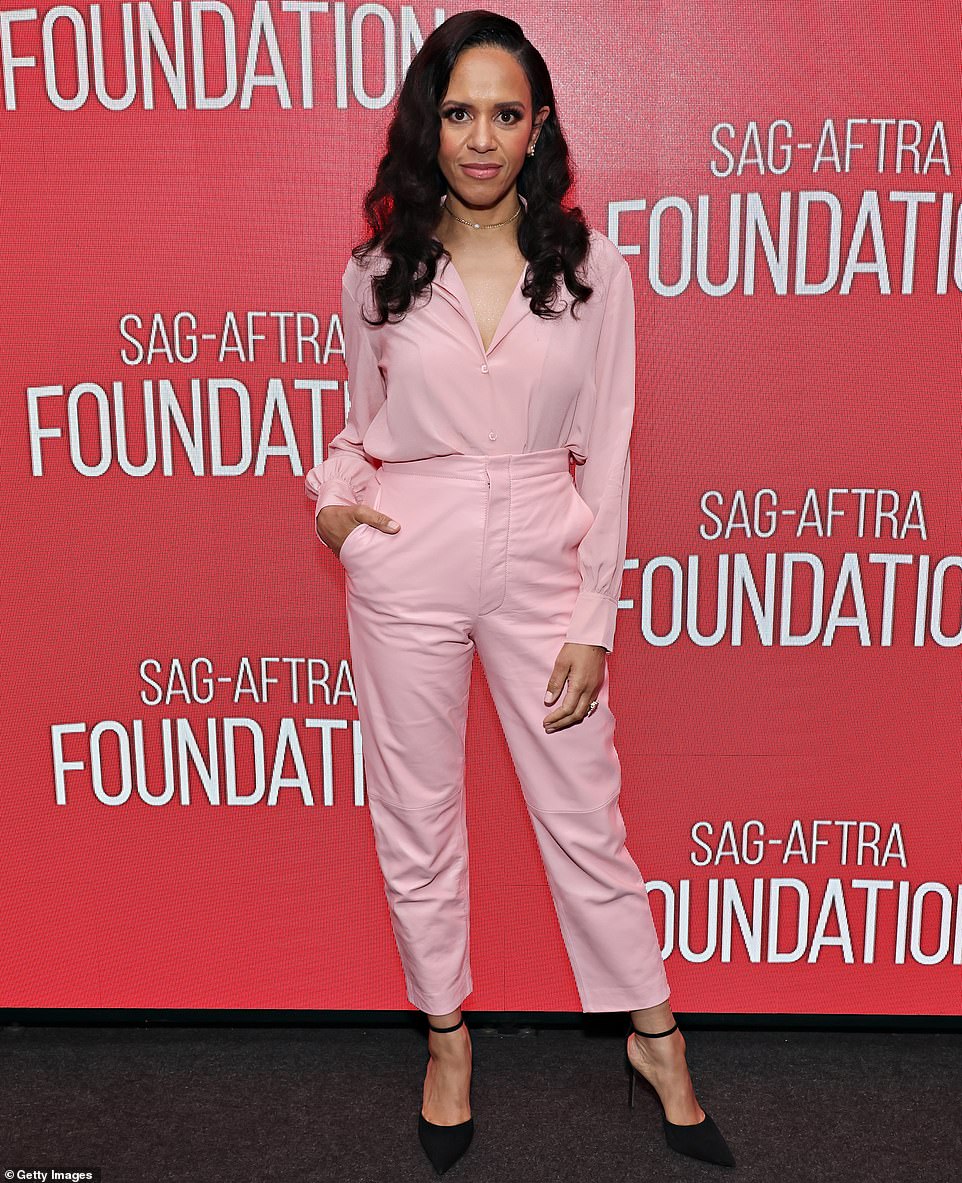 Stylish: Sara Zwangobani, who plays the character of Marigold Brandyfoot, opted for business chic in pink slacks and blouse 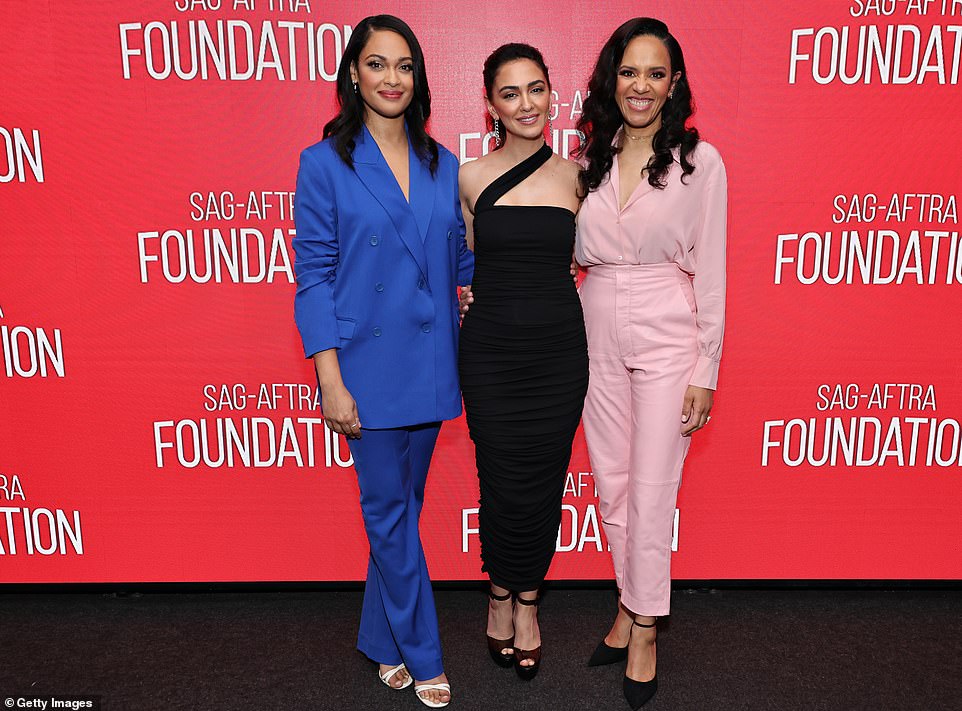 Fashionable trio: Cynthia, Nazanin, and Sara sent big smiles towards the camera as they took a quick photo together

Leon Wadham, who portrays Kemen, Daniel Weyman who plays The Stranger, and Benjamin Walker, who is known as the character of Gil-galad, also were in attendance.

Leon wore tan pants along with a collared jacket of the same color. Underneath, he added a patterned dress shirt which was partially covered.

Daniel also wore tan pants which he paired with a plain white T-shirt and a vibrant blue jacket on top.

Benjamin chose a stylish ensemble, and wore a tan suit with a white dress shirt underneath. 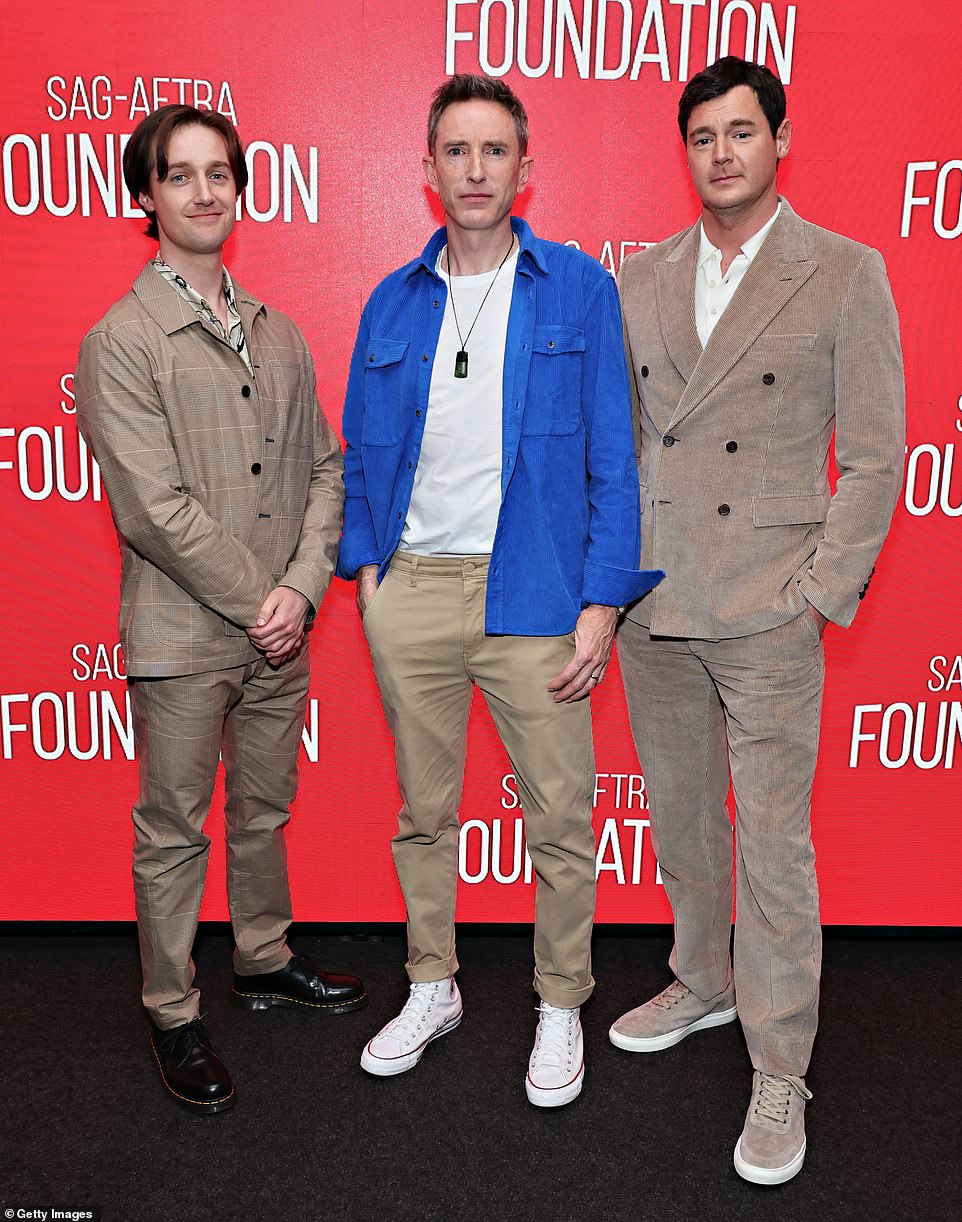 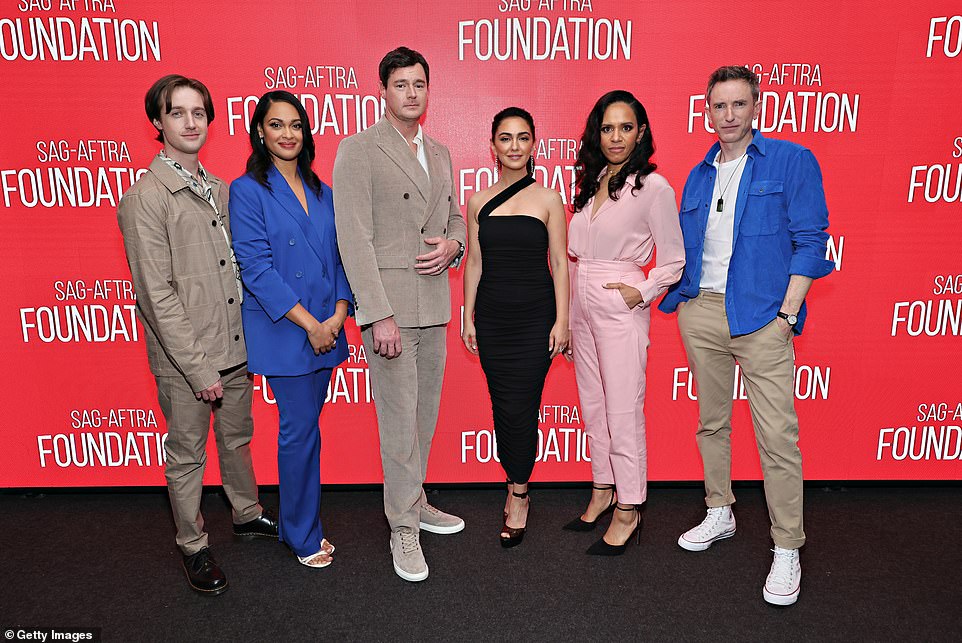 Fabulous group photo: The talented cast members of The Rings Of Power paused for a photo together

The premise of the series occurs thousands of years before The Hobbit and The Lord Of The Rings takes place and the characters ‘confront the long-feared re-emergence of evil to Middle-earth,’ according to IMDB.

According to The Hollywood Reporter, the second season for The Rings Of Power began production and filming in the U.K. earlier this month.

The publication reported that one of the choices to not film in New Zealand like the previous first season was due to ‘economical’ reasons.

During the show’s debut week, a grand total of 1.3 billion minutes were streamed, prompting more of the story to be told to devoted fans. 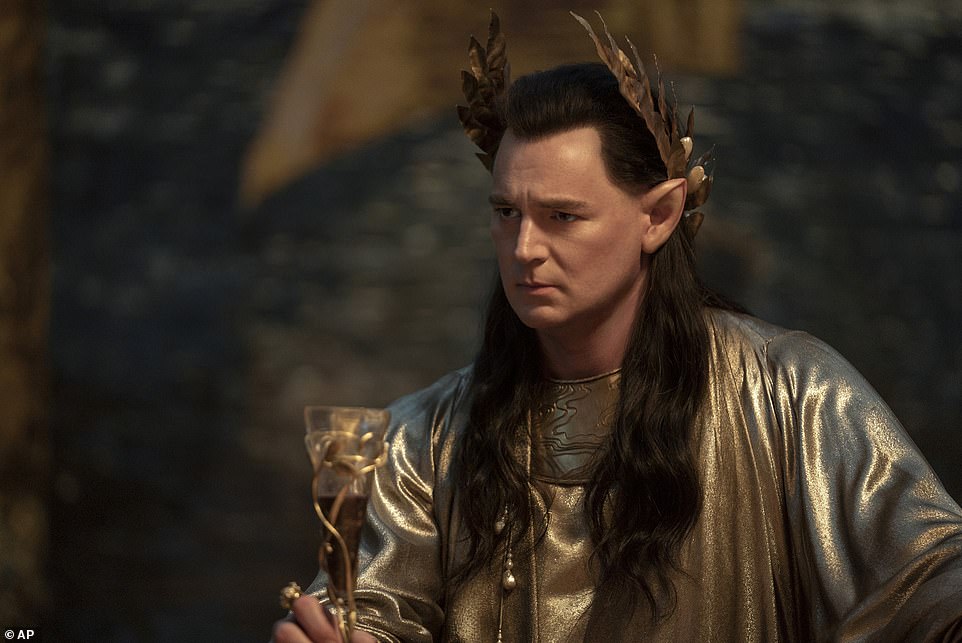 In character: Benjamin Walker is seen playing the role of Gil-galad in a scene of The Rings Of Power 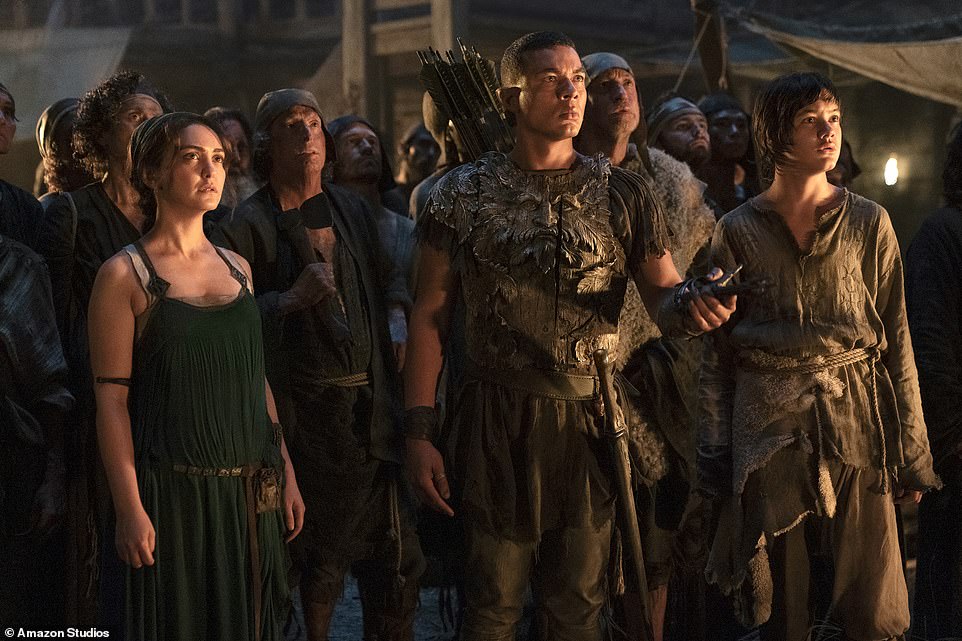 Popular: According to The Hollywood Reporter, the show’s debut week had a total of 1.3 billion minutes viewed