Nazanin Zaghari-Ratcliffe’s daughter faces sixth Christmas without her mother, who continues to languish in Iranian jail

By Claire Ellcott Political Correspondent For The Daily Mail

The thing Gabriella Ratcliffe wants most of all for Christmas is the return of her imprisoned mother Nazanin.

But she’ll have to make do with a video call to Iran, where Mrs Zaghari-Ratcliffe remains under house arrest and will spend a sixth festive season separated from her family.

Gabriella’s father, Richard, said that being apart was weighing on the seven-year-old, who is now old enough to understand the situation.

Gabriella’s father, Richard (both pictured), said that being apart was weighing on the seven-year-old, who is now old enough to understand the situation

‘She doesn’t like talking about it and feeling different from the other girls at school, like the odd one out.

‘She also doesn’t like being asked how she feels. She’s big enough to be aware of what’s being said when I do interviews. She asks, ‘Why does it have to be my mummy? When’s she going to come back?’

Mrs Zaghari-Ratcliffe, from London, was arrested at Tehran’s Imam Khomeini airport while travelling to introduce Gabriella to her parents in April 2016.

She was sentenced to five years in prison over spurious allegations of plotting against the Tehran government. 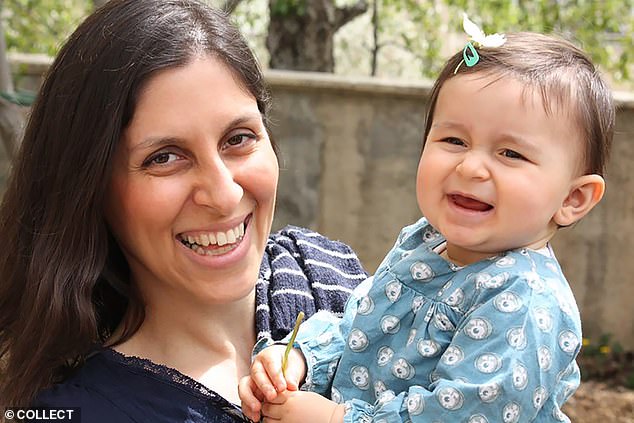 At the end of the term, the authorities charged Nazanin with ‘propaganda against Iran’ and handed her a further one-year sentence.

At the end of the term, the authorities charged her with ‘propaganda against Iran’ and handed her a further one-year sentence.

She is awaiting news on whether she will have to return to prison.

Diplomatic moves to secure her release appear to have stalled.

It has emerged that Boris Johnson had refused Mrs Zaghari-Ratcliffe’s request for a phone call on Boxing Day – her 43rd birthday.

A call with Foreign Secretary Liz Truss was offered instead.

A Government spokesman said the PM was horrified by her ordeal, adding: ‘We are working as hard as we can to get her home.’