If you, like me, spend a large part of your day hunched over a computer or staring down at your smartphone screen – or ‘double screening’ by doing both at the same time – then you may suffer neck pain.

In fact, the problem even has its own name: tech neck. Prolonged periods of peering downward over a screen causes the neck to ‘get stuck’ in a more forward position, because those strained tissues lose their pliability.

And the condition isn’t just cause of discomfort. No, the worst part is that it’s causing an explosion in prematurely lined and wrinkled necks.

So what can be done? Well, rolling the shoulders and neck forwards and the back, tucking in the chin – like making a double chin – and doing various other shoulder stretches are said to help. But I was intrigued to try a traditional Chinese medical approach called tui na, after reading reports of a German study that found six sessions of this special massage could reduce neck pain significantly. So where better to try it than in the birthplace of the method, Beijing.

Jonathan Neal had tui na – a Chinese medical therapy – at the Rosewood Beijing (pictured), part of the ultra-hip company’s growing collection of unique luxury properties around the world, and visited its Sense spa

I had the chance to visit Beijing on a stop-off, on the way to Tokyo. The Chinese government now allow visitors to the city, Shanghai and a couple of other destinations to stay for up to five days (144 hours) without a visa as long as you’re then going onward to somewhere other than your country of origin.

The Transit Without Visa (TWOV) system makes having a day or two in China on the way to another Asian destination an enticing possibility. I stayed at the Rosewood Beijing, part of the ultra-hip company’s growing collection of unique luxury properties around the world, and visited its Sense spa.

Having visited a fair few spas around the world, I’d confidently say Sense is up there with the best. The hotel is a stunning 282-room glass skyscraper, set among the other towers of the city’s financial district. You enter the spa via a wooden walkway over water. Candles and bamboo screens give a nod to the Chinese heritage without being pastiche. The cavernous room has a glass ceiling and is planted with a small jungle of trees and plants, giving an outdoorsy feel. Tui na (90 minutes, £123) translates as ‘pinch and pull’, which is pretty accurate. For the massage, you wear special undergarments, you’re covered with a large cloth sheet and the massage is carried out through this. 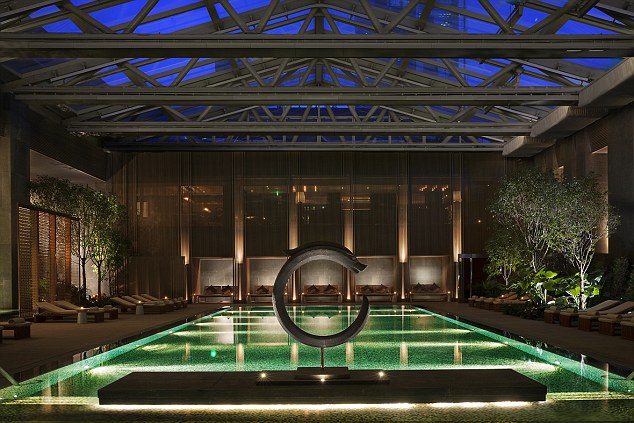 ‘I got off the table feeling more flexible and agile, with far more movement in my neck. I’m so impressed that since coming home, I’ve had a treatment every fortnight or so at my local Chinese doctor’s clinic’

Like acupuncture, the strokes – small, and mostly circular – are designed to work along the invisible energy meridians that flow through the body, bringing everything into balance.

It’s quite invigorating, and at times deep enough to make you wince slightly.

And the effect is almost immediate. I got off the table feeling more flexible and agile, with far more movement in my neck. I’m so impressed that since coming home, I’ve had a treatment every fortnight or so at my local Chinese doctor’s clinic.