New car sales have grown for the first time in half a year, according to figures published by the auto sector this morning.

Almost 284,000 motors were registered in March, which was an 11.5 per cent increase on the same month last year.

It’s the first month of year-on-year sales increases since August 2020 and comes as car dealerships prepare to reopen their showroom doors to customers next week for the first time in 2021.

Mike Hawes, chief executive of the Society of Motor Manufacturers and Traders said there is ‘optimism that consumer confidence – and hence the market – will return’ as retailers get ready to welcome back buyers on 12 April.

This is almost 30,000 more than a year ago, when lockdown measures were first introduction.

Dealers were forced to close to the public from the end of trading on 23 March 2020 as the nation was plunged into the first Covid-19 restrictions.

When looking back further than last year’s virus-hit registrations figures, the statistics show that March 2020 sales were down around 37 per cent on the average volume of purchases for 2010 to 2019.

March is the biggest auto sales month of the year, boosted by the first of two new registration numbers launching – and dealers offering improved deals to tempt customers into the latest models.

The automotive sector had been hopeful that the Prime Minister’s phased easing of lockdown might have allowed them to reopen ahead of the busiest month for trading, but showrooms were kept in a state of lockdown for the entirety of the month – as it has done for all of 2021 so far.

It means dealers were able to sell over 280,000 cars using ‘click and collect’ and delivery services only – a remarkable achievement in the face of the pandemic. 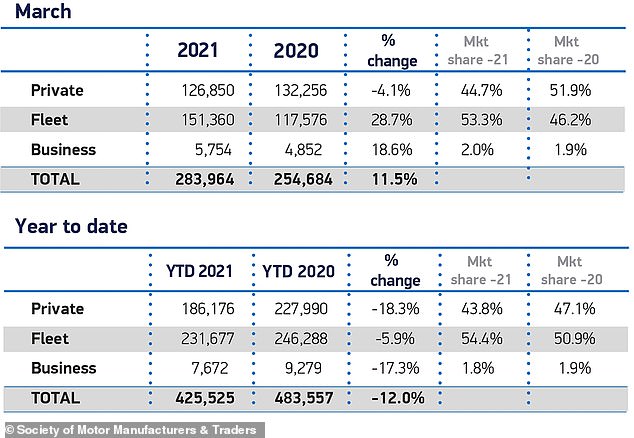 While overall registrations were up compared to last year, the SMMT pointed out that growth came almost entirely from fleets, which saw a 28.7% increase in registrations. 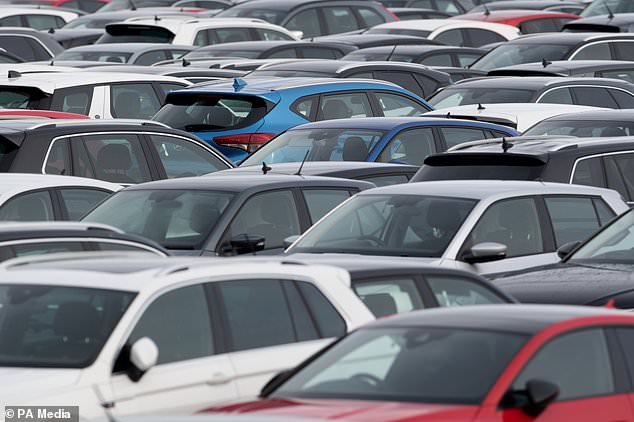 Dealers were able to sell over 280,000 cars using ‘click and collect’ and delivery services only – a remarkable achievement in the face of the pandemic 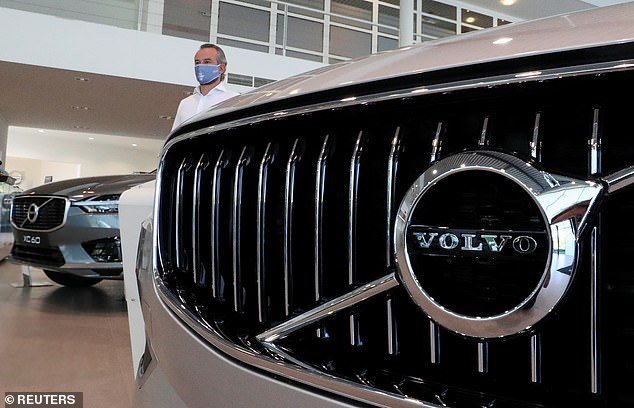 While overall registrations were up compared to last year, the SMMT pointed out that growth came almost entirely from fleets, which saw a 28.7 per cent increase in registrations.

Retail consumer demand remained depressed, though by only 4.1 per cent compared to March 2020, when showrooms were open for the first three weeks before Boris Johnson announced the initial national lockdown.

Today’s figures will boost morale in the industry ahead of showrooms in England reopening from Monday 12 April, alongside other nonessential retail outlets.

Commenting on today’s published figures, Mr Hawes said: ‘The past year has been the toughest in modern history and the automotive sector has, like many others, been hit hard.

‘However, with showrooms opening in less than a week, there is optimism that consumer confidence – and hence the market – will return.

‘We know we will see record breaking growth next month given April 2020 was a washout, but a strong and sustainable market is possible if customers are attracted to the choice and competitive offer the industry is able to provide within the safest of showroom environments.’ 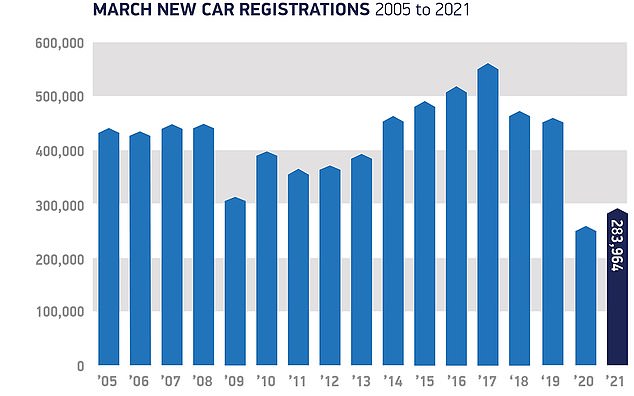 When looking back further than last year’s virus-hit registrations figures, the statistics show that March 2020 sales were down around 37% on the average for 2010-2019 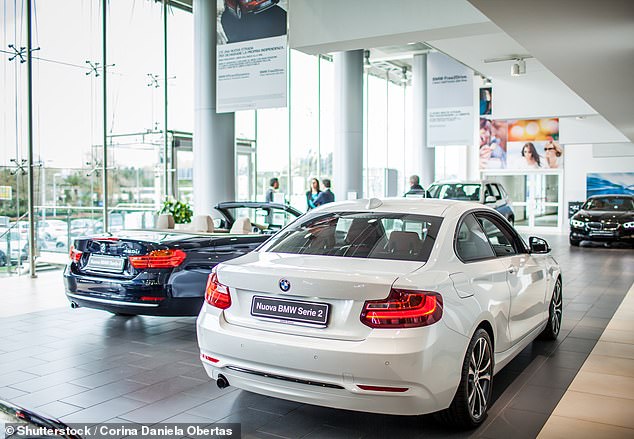 Sector bosses said there is ‘significant pent-up demand’ for new models, which looks set to be released from next week when showrooms are allowed to open for the first time in 2021

Sue Robinson, Chief Executive of the National Franchised Dealers Association, in reaction to the March sales statistics said: ‘There is still significant pent-up demand and dealers are ready to deliver when lockdown eases on 12 April.

‘Our members have ensured that their showrooms are Covid-secure by operating on an appointment basis, investment in PPE and instituting social distancing measures.

‘Today’s figures show that demand for the new ‘21’ plates is high. This demand is expected to further increase as industry data suggests that many car buyers are waiting for dealerships to fully reopen to complete their purchases.

‘As dealers will be able to safely welcome customers back to the showrooms in less than a week, April is expected to be a bumper month.’ 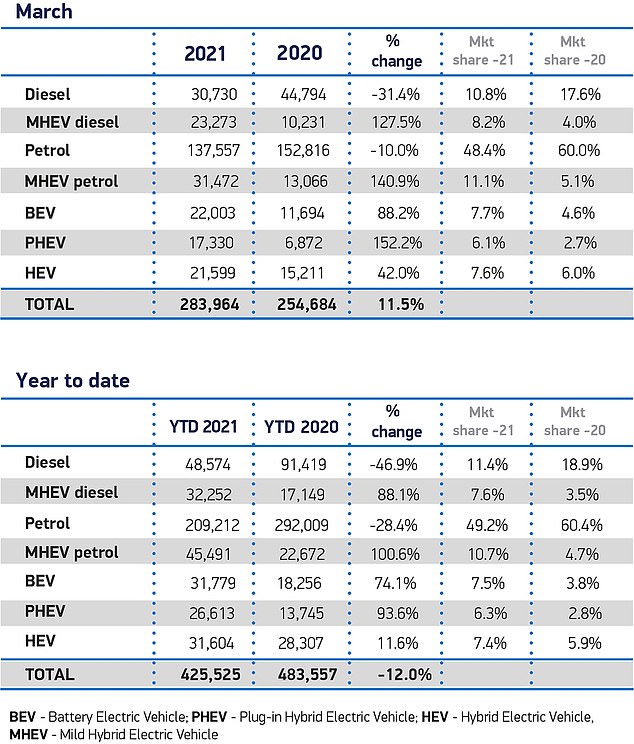 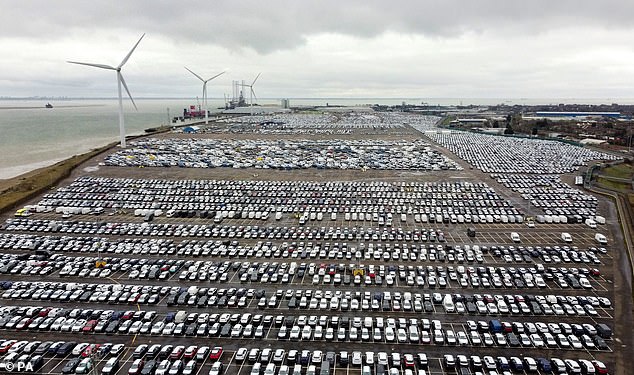 For the sector to return to its pre-pandemic levels, the SMMT estimates that around 8,300 new cars will need to be registered every single trading day for the rest of the year 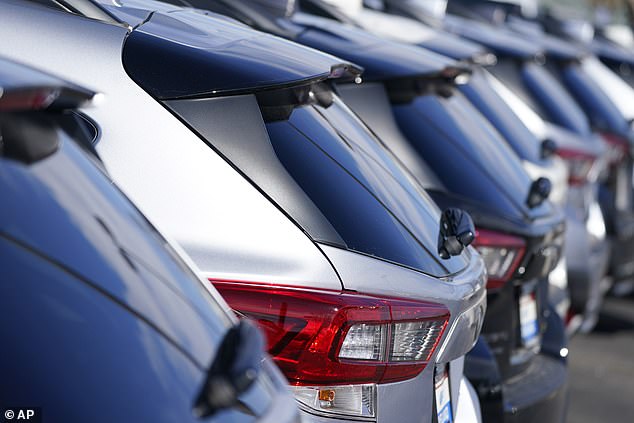 Today’s figures will boost morale in the industry ahead of showrooms in England reopening from Monday 12 April, alongside other nonessential retail outlets.

March sales showed a continued shift to new technologies is continuing, with plug-in vehicle demand reaching its highest ever volume.

Battery electric vehicles (BEVs) and plug-in hybrid vehicles (PHEVs) took a combined market share of almost 14 per cent, up from 7.3 per cent last year as the number of models available to customers increased from 72 to 116.

‘New plug-in models are already helping drive a recovery but to convince more retail consumers to make the switch, they must be assured these new technologies will be convenient for their driving needs and that means, above all, that the charging infrastructure is there where they need it, and when they need it,’ Hawes added.

The Vauxhall Corsa retained its spot at the top of the sales charts, out-performing its biggest rival the Ford Fiesta for a second month in 2021 with almost 8,000 sold in March.

Among last month’s other best-sellers was the all-electric Tesla Model 3, which was fourth most-bought model.

Many buyers would have been attempting to rush-through the purchases of their expensive electric vehicles with ministers recently announcing cuts to the Plug-in Car Grant that means the Model 3 – and all Tesla cars – are no longer eligible for a subsidy of £2,500 off the list price.

The Ford Fiesta, the UK’s best-selling new motor for 12 consecutive years – looks at threat of losing its favourite-model status as more drivers turn to the Vauxhall Corsa in March 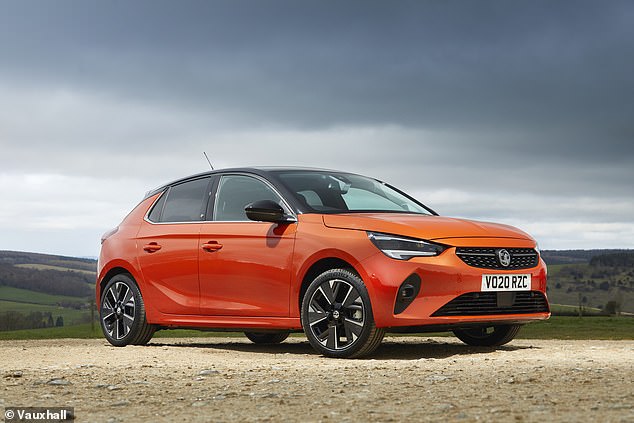 The new Corsa – which launched in 2020 – is the UK’s most-bought new model of 2021 so far, easing ahead of its closest rival 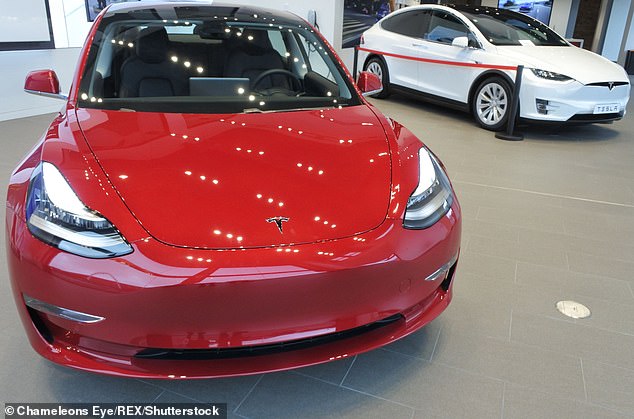 The Tesla Model 3 electric car was the fourth most-registered model in March, as buyers flocked to purchase the vehicles before they became ineligible for government-backed grants

So far, 2021 has seen 58,032 fewer cars registered compared to January to March last year, equivalent to a loss of £1.8 billion in turnover during the first quarter.

For the sector to return to its pre-pandemic levels, the SMMT estimates that around 8,300 new cars will need to be registered every single trading day for the rest of the year.

By comparison, the industry has averaged around 7,400 a day during the past decade and current levels are closer to 5,600 a day.

Commenting on today’s figures, Karen Johnson, head of retail and wholesale at Barclays Corporate Banking, said: ‘With last year’s March figures encompassing the UK’s last few weeks of pre-Covid spending patterns, we expected to see new car sales down year-on-year across the board. ‘

She added: ‘Looking further ahead, the future of working patterns is seen by many as key to the fate of the UK vehicle market.

‘People need to know what their day-to-day schedules – and travel requirements – are going to look like before they commit to a new car. Once this certainty comes, we can expect to see pent up demand from everyday consumers pushing sales in an even more positive direction.’