Eight NFL players joined commissioner Roger Goodell and 10 team owners on Tuesday night at the league offices in Manhattan to discuss the best way to proceed with regards to the ongoing player protests during the national anthem.

Over 200 NFL players protested police brutality against minorities by sitting, kneeling, or standing with their arms locked in Week 3 after an onslaught of criticism from President Donald Trump on the subject over the weekend.

‘We basically talked about the anthem, the kneeling that happened this past weekend and how we did show solidarity basically against Trump’s statement and what we’re going to do moving forward,’ New York Giants linebacker Jonathan Casillas said after Thursday’s practice. 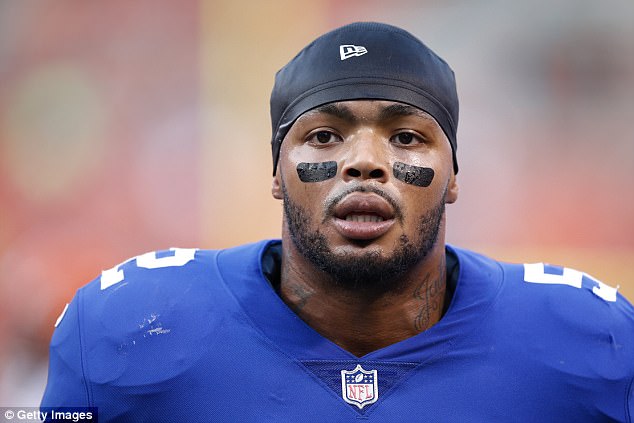 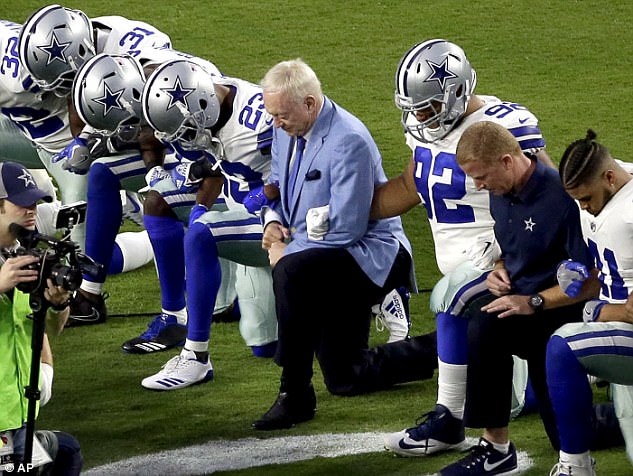 Trump spent the better part of last weekend attacking protesting NFL players and calling on team owners to suspend anyone who knelt during the national anthem. He went so far as to refer to protesting players as ‘sons of b******’ during a speech in Alabama on Friday.

There were only a handful of players protesting in Week 2, but Trump’s statements helped to galvanize players around the league.

‘Thank Trump for saying what he said because without him saying that, number one, the whole league wouldn’t have been so collectively together,’ Casillas said. ‘[N]umber two, we would never have had that meeting.’

According to a league spokesman, Tuesday’s meeting was one of many conversations that have happened throughout the league this week. On Tuesday, eight players from five teams and 10 league owners met with Goodell.

‘The Commissioner believed with all the owners here for committee meetings it was important to bring in some players and hear directly from them,’ the spokesman explained. ‘While the conversations will remain private, they were very informative and instructive.’

The protests were started during the 2016 preseason by then-49ers quarterback Colin Kaepernick, who used his public platform to protest police brutality and racism by taking a knee during the national anthem. Kaepernick has since opted out of his contract and remains a free agent, but that fact has not stopped the protests throughout the league.

And those protests are receiving mixed reactions to say the least.

In Tennessee, for instance, businessman Allan Jones pulled his advertisements from NFL games. And across the league in Week 3, fans could be hears yelling at players to ‘stand up’ during the national anthem.

Trump insists that the protests will hurt the league and its players, but it’s hard to say if that’s been the case. Ratings for Monday Night Football were up 63 percent compared to Week 3 last season, but the Sunday Night Ratings took a 10 percent dip from the previous week’s game.

Regardless, Trump tweeted that the boos he heard before the Dallas Cowboys’ win over the Arizona Cardinals on Monday night were the ‘loudest’ he had ever heard.

Trump claimed the boos directed at the Dallas Cowboys were the ‘loudest I have ever heard.’ ESPN earned a 9.3 overnight rating, which is a 63 percent jump from Week 3 last year

When asked if he thinks Goodell wants the protests to stop, Casillas hesitated.

Giants defensive captain Jonathan Casillas said Thursday that he was invited to a Tuesday night meeting at NFL headquarters where commissioner Roger Goodell, several owners including Giants co-owner John Mara, and other players discussed how best to proceed in a unified and productive manner with the league-wide protests during the national anthem and beyond.

As Casillas explained, that message has been lost in the controversy over the protests.

There wasn’t any official decision announced Tuesday in connection with the meeting, but the Denver Broncos announced on Thursday that they would be standing together during the national anthem before Sunday’s game against the Oakland Raiders. 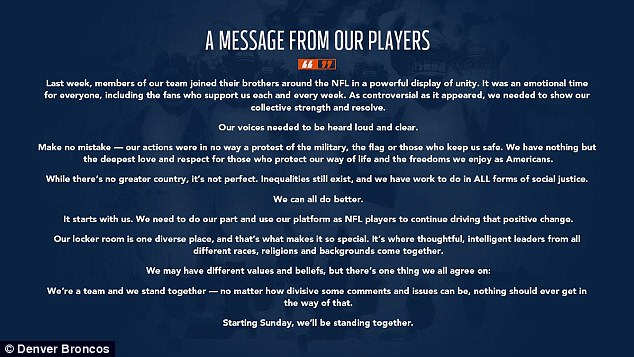 In Thursday’s statement, the Broncos announced they would stand for Sunday’s anthem

‘Last week, members of our team joined their brothers around the NFL in a powerful display of unity,’ read the statement from the Broncos players. ‘It was an emotional time for everyone, including the fans who support us each and every week. As controversial as it appeared, we needed to show our collective strength and resolve. Our voiced needed to be heard loud and clear.

‘We may have different values and beliefs, but there’s one thing we all agree on: We’re a team and we stand together — no matter how divisive some comments and issues can be, nothing should ever get in the way of that,’ the statement continued. ‘Starting Sunday, we’ll be standing together.’

Last Sunday, 32 Broncos players took a knee during ‘The Star-Spangled Banner’ in response to Trump’s criticism. 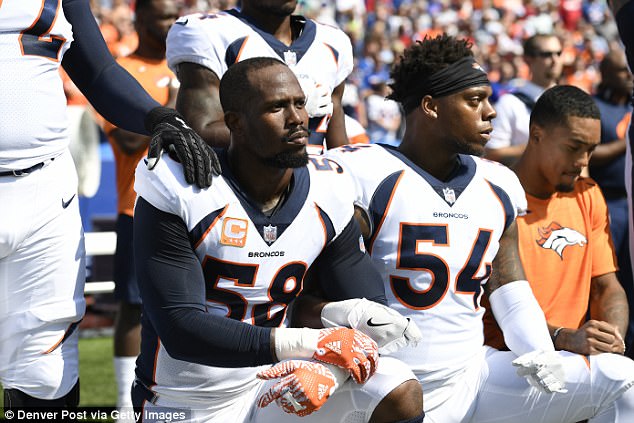 ‘Make no mistake — our actions were in no way a protest of the military, the flag or those who keep us safe,’ read the Broncos’ statement. ‘We have nothing but the deepest love and respect for those who protect our way of life and the freedoms we enjoy as Americans. While there’s no greater country, it’s not perfect. Inequalities still exist, and we have work to do in ALL forms of social justice. We can all do better.’

In speaking with the team’s website, general manager and former Broncos quarterback John Elway seemed to agree with his players.

‘I believe that this is the greatest country in the world. We are very fortunate to live here, but it’s obviously not perfect,’ he said. ‘There are a lot of things that need to be corrected, and we will continue to work on those things. I’m one that really believes in standing for the flag. I understand the players and the way they felt from the comments that were made earlier in the week. They felt that they had to go down and kneel and that’s up to them.’

The Packers, meanwhile, have asked fans to lock arms while standing during the national anthem before tonight’s game against the rival Chicago Bears. The team’s players did exactly that before Sunday’s game.

The NFL family is one of the most diverse communities in the world. Just look around! The eclectic group of players that you root for, the coaches you admire, the people you sit next to in the stands, those high-fiving on military bases, fans at the sports bar or during tailgate parties—we all come from different walks of life and have unique backgrounds and stories.

The game of football brings people together. As NFL players, we are a living testimony that individuals from different backgrounds and with different life experiences can work together toward a common goal.

This Thursday during the national anthem at Lambeau Field, Packers players, coaches and staff will join together with arms intertwined—connected like the threads on your favorite jersey. When we take this action, what you will see will be so much more than just a bunch of football players locking arms. The image you will see on September 28th will be one of unity. It will represent a coming together of players who want the same things that all of us do—freedom, equality, tolerance, understanding, and justice for those who have been unjustly treated, discriminated against or otherwise treated unfairly. You will see the sons of police officers, kids who grew up in military families, people who have themselves experienced injustice and discrimination firsthand, and an array of others all linking together in a display of unity.

Those of us joining arms on Thursday will be different in so many ways, but one thing that binds us together is that we are all individuals who want to help make our society, our country and our world a better place. We believe that in diversity there can be UNI-versity. Intertwined, we represent the many people who helped build this country, and we are joining together to show that we are ready to continue to build.

Let’s work together to build a society that is more fair and just.

Join us this Thursday by locking arms with whoever you’re with, stranger or loved one, wherever you are—intertwined and included—in this moment of unification.