By Chris Jewers For Mailonline and Ap

North Korea fired several suspected cruise missiles off its east coast on Tuesday, South Korea’s military said, the latest in a slew of weapons launches by the North despite worries about a possible coronavirus outbreak in the country.

The launches came on the eve of the 108th birthday of North Korea’s late founder, Kim Il Sung, the grandfather of current leader Kim Jong Un. They also came a day ahead of South Korean parliamentary elections.

South Korea’s Joint Chiefs of Staff said in a statement that the projectiles – presumed to be cruise missiles – were fired from the North’s eastern Kangwon province on Tuesday morning before flying toward the country’s eastern sea.

An image circulated by the North Korean government shows what is said to be a Hwasong-12 intermediate range missile firing from Pyongyang, and is the latest in a number of launches 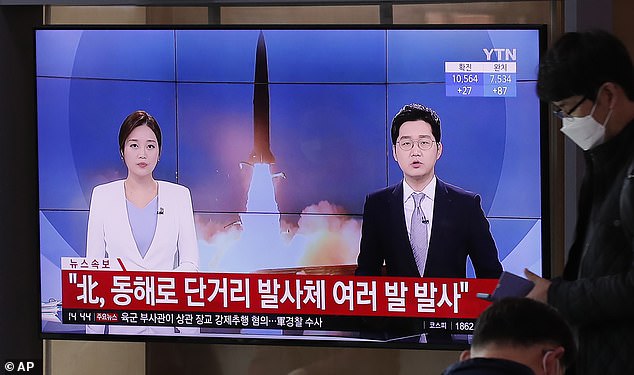 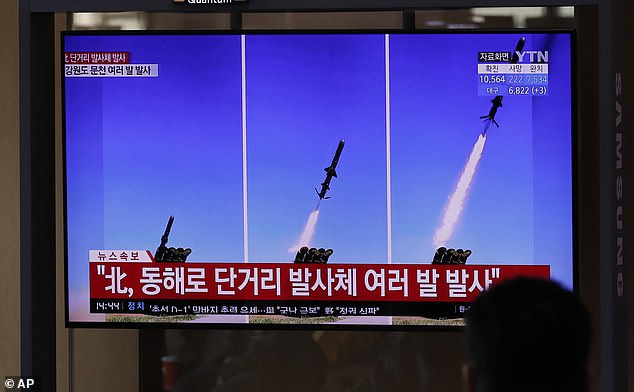 It said South Korea’s military was monitoring possible additional launches, but gave no further details, such as exactly how many projectile were launched or what type of projectiles they were.

In recent weeks, North Korea has carried out a series of short-range missile and other weapons tests amid stalled nuclear talks with the United States.

Most of the weapons tested were ballistic missiles or long-range artillery shells, and it’s unusual for North Korea to launch a cruise missile.

All the tested weapons were still short-range and didn’t pose a direct threat to the U.S. mainland. A test of a missile capable of reaching the U.S. homeland would end North Korea’s self-imposed moratorium on major weapons tests and likely completely derail nuclear diplomacy with the United States. 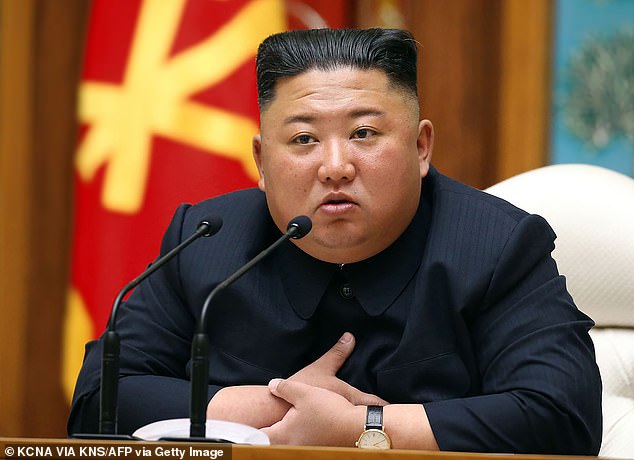 North Korea’s leader Kim Jong Un has insisted that there has been no coronavirus outbreak in his county. Experts have said they are skeptical of this claim and have warned of a humanitarian disaster in the country to to it’s lack of medical supplies 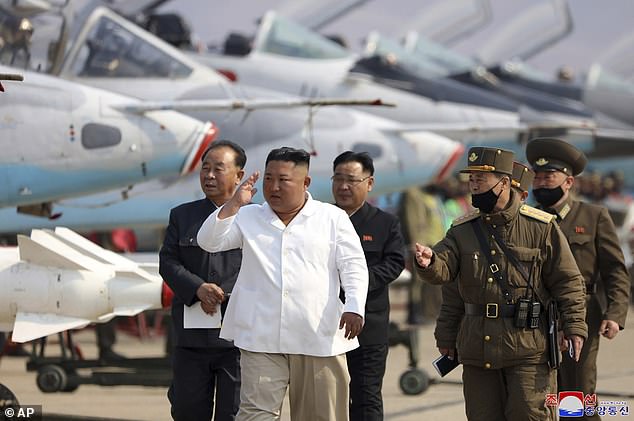 Kim Jong Un inspects an air defense unit in the west of the country in April 12, two days before the display of military strength on April 14 in which a number of missiles were launched

Some experts say North Korea likely used the latest weapons launches to bolster its striking capability against South Korea, which has been introducing U.S.-made stealth F-35 jets and other sophisticated conventional weapons systems in recent years. Others say the latest weapons tests were also aimed at shoring up internal unity in the face of U.S.-led sanctions and the coronavirus pandemic.

North Korea has repeatedly said there has been no coronavirus outbreak on its territory. But many foreign experts are skeptical of that claim and have warned that a coronavirus outbreak in the North could become a humanitarian disaster because of the country’s chronic lack of medical supplies and fragile health care infrastructure.