A controversial US huntress has sparked fury by posing next to a sheep she has just killed and holding up a blood-covered sex toy in a shocking photo.

Larysa Switlyk, a TV host who caused outrage by taking selfies with dead goats during a hunting trip in Scotland earlier this year, smiles as she holds aloft the rubber fist while kneeling over the body of a freshly-killed male soay sheep.

The photo was taken during an all-girls hunting trip to Norfolk, which was called off by the organiser halfway through due to the raucous, ‘hen-do atmosphere’.

British hunter Jenna Gearing was one of those involved in the trip but said she quit early disgusted by Ms Switlyk’s attitude.

She said the sex-toy had been bought for one of the girls, who was celebrating her 30th birthday in a pub the night before the photo was taken.

Ms Gearing, 24, told MailOnline: ‘It was a bit of fun during the party but I have no idea why it was brought out the following day on a hunt.

Larysa Switlyk, a US TV host (pictured), has sparked fury by posing next to a sheep she has just killed and holding up a blood-covered sex toy in this shocking photo taken on a hunt in Norfolk 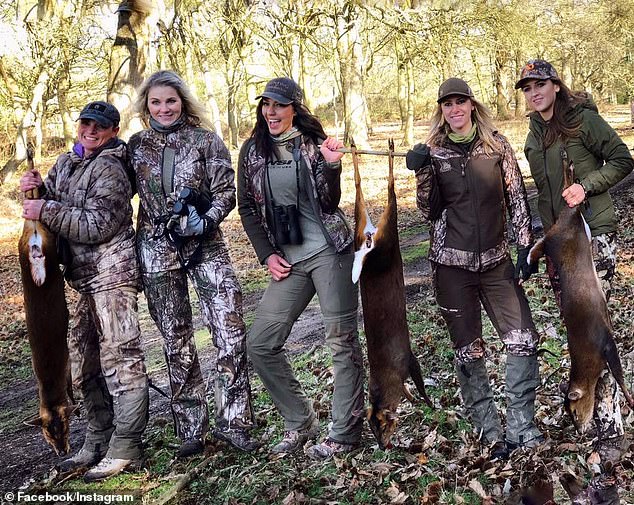 The photo was taken during an all-girls hunting trip to Norfolk, in the UK, which was called off by the organiser halfway through due to the raucous, ‘hen-do atmosphere’ 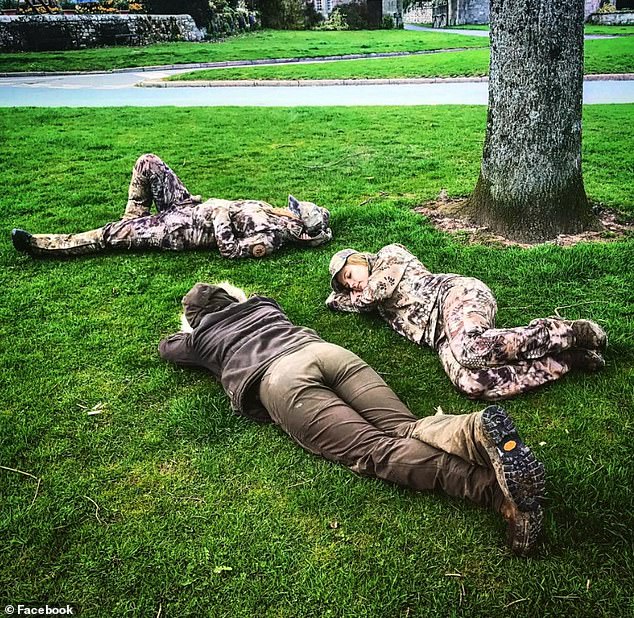 One of the women on the trip, British hunter Jenna Gearing said she left early because she was disgusted by Ms Switlyk’s attitude. She said the sex-toy had been bought for one of the girls, who was celebrating her 30th birthday in a pub the night before the photo was taken

‘It was an appalling thing to do, a complete show of disrespect to the animal she has just killed.

‘I’m not friends with her [Larysa] any longer and In fact the reason I left that hunt early was because I was so against what she stood for and her morals.

‘I’d left the hunting trip before that photo was taken but it is an embarrassment to people that hunt like me and my family, who do it for sustainability, management and to eat wholesome freerange meat that I can source.’

Ms Gearing said that Switlyk, 33, had been ‘looking forward’ to killing Chinese Water Deer, imported from Asia that now live wild in Norfolk and East Anglia.

She added: ‘You can tell a lot about people with the way they talk about hunting and Larysa was boasting about killing as big a water deer as she could find to take the tusks from their mouth as a trophy.

‘She was rude and arrogant to everyone on that trip and has a complete disregard for the animals she kills.

‘Even the organiser of the hunt called it a day half-way through. She is unbearable.

‘All I can say is that if someone gets pleasure out of shooting an almost domestic animal walking around a small fenced field then that’s a real concern; especially to show to sheer lack of respect of the animal by doing that. 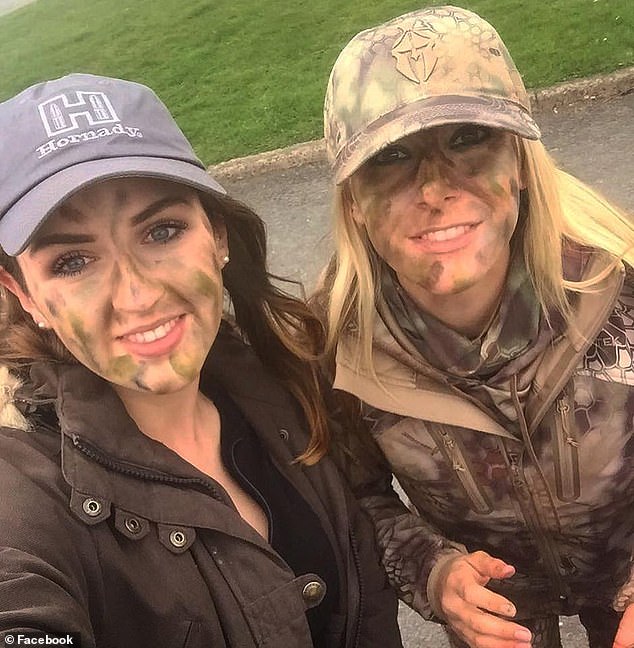 Ms Gearing (left), 24, a sculptress, from Sussex, said of Ms Switlyk’s (right): ‘I’m not friends with her any longer. The reason I left that hunt early was because I was so against what she stood for and her morals’ 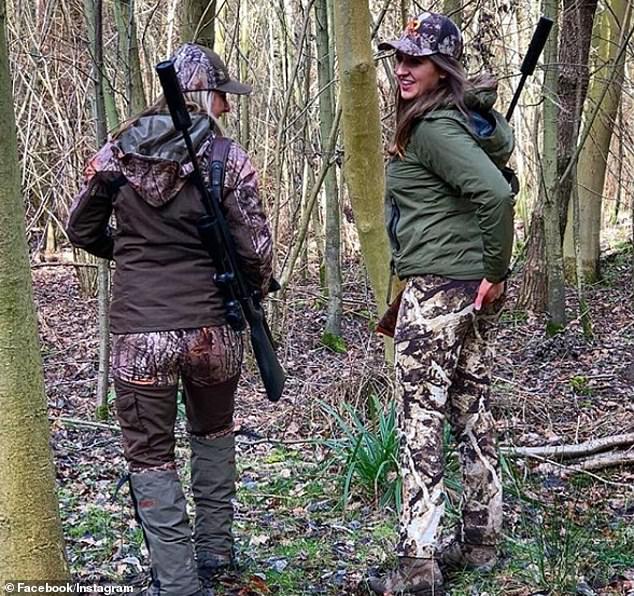 ‘If that’s what a famous ‘hunter’ is, it’s an embarrassment to the rest of us that do it as a way of life, to manage and take only what you need off the land to feed our family’s food, honest, free range meat.

‘She is no hunter she is a killer and should be ashamed, and it’s people like her that give us a bad name. The fact she has no shame about any of the publicity she is getting says it all.’

A hunting expert who was shown the image by MailOnline believes Switlyk had cut the sheep’s throat to let the blood before smearing it over the sex toy.

He said: ‘It was an absolutely revolting thing to do. It’s callous and shows a complete disrespect to the animal.’

Other photos from the same Norfolk hunting trip uploaded on to Switlyk’s Instagram page show her posing with a dead dear and admiring the size of the antlers and showing off the tusks from a dead Chinese water deer with the caption: ‘I can’t get over these fangs’

She also poses with a dead muntjac deer and writes: ‘Tricky little buggers but so much fun to hunt.’

Garry Doolan, spokesman for the British Association for Shooting and Conservation, said: ‘As the UK’s largest shooting organisation, we are appalled by the pictures. If that is the manner in which she wishes to portray shooting, then Larysa Switlyk is not welcome on these shores again.

‘She appears interested only in promoting herself and driving interest for the online brand she is trying to create. She is shamelessly putting profitability before ethics.

‘Her behaviour stands only to damage the sport she says she is trying to promote and will be rightly condemned by the UK shooting community.

‘Her antics are utterly at odds with the values and standards of a UK shooting community which is driven by strong ethics and respect for quarry.’ 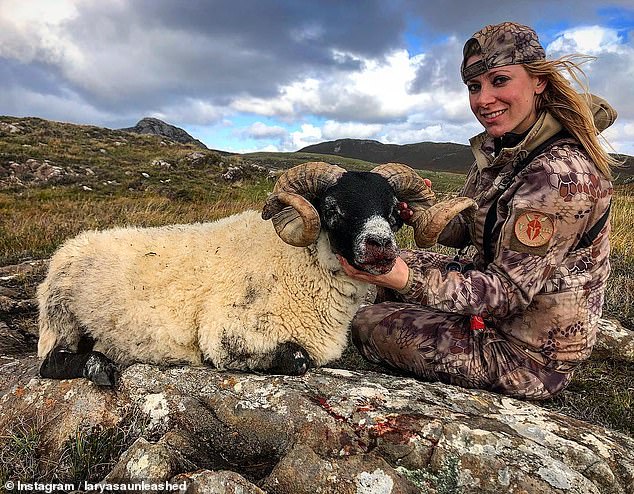 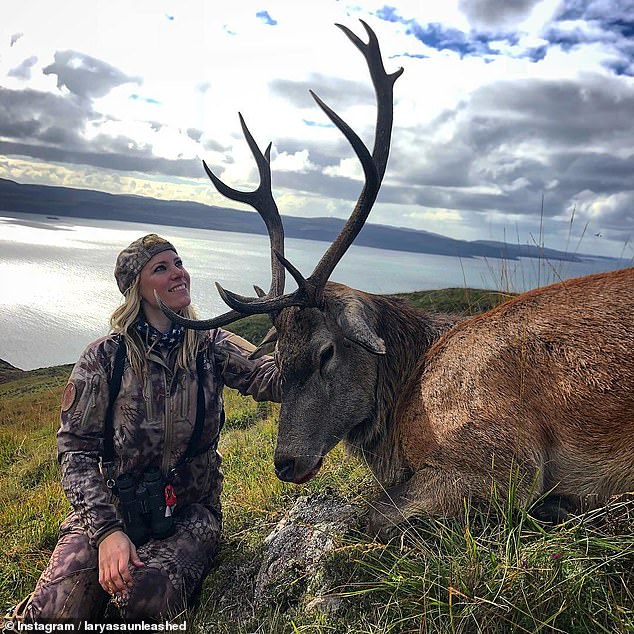 At the hunt in Scotland, the presenter drew criticism from Judy Murray, the mother of tennis star Andy, among those who voiced their outrage, who tweeted: ‘A unique hunt? Disgraceful’

The latest photos emerge just a month after Switlyk received death threats for Instagram selfies with an Islay goat she shot while hunting in the Scottish Highlands last month.

The huntress posted an image on Twitter of her fellow hunter posing with one of his kills.

She wrote in the post: ‘Congrats on Jason on his gold medal. A unique hunt.’

Judy Murray, the mother of tennis star Andy, was among those who voiced their outrage, tweeting: ‘A unique hunt? Disgraceful.

‘It’s a goat. And it’s in Scotland, on a beautiful island.

Ms Switlyk has long made headlines with her unrepentant Instagram packed with selfies of her and the bodies of her prey – wildlife from across the world.

She is a certified public accountant turned hunter who discovered her passion while on a guided deer hunt in New Zealand.