Supporters of world number one tennis star Novak Djokovic took to the streets in Belgrade today to demonstrate their support for the player.

Djokovic could be deported from Australia on Monday after being rejected entry into Melbourne by Border Force officials over vaccine exemption criteria.

He now faces the next four days in a refugee hotel while he waits to see whether he will be deported from the country on Monday.

And showing their support for the player, crowds of people – including Novak’s family members – took to the streets in the capital of Serbia.

A man wearing a large Serbian flag over his shoulders is seen holding up a large sign in front of a crowd of angry people outside the National Assembly in Belgrade, Serbia today 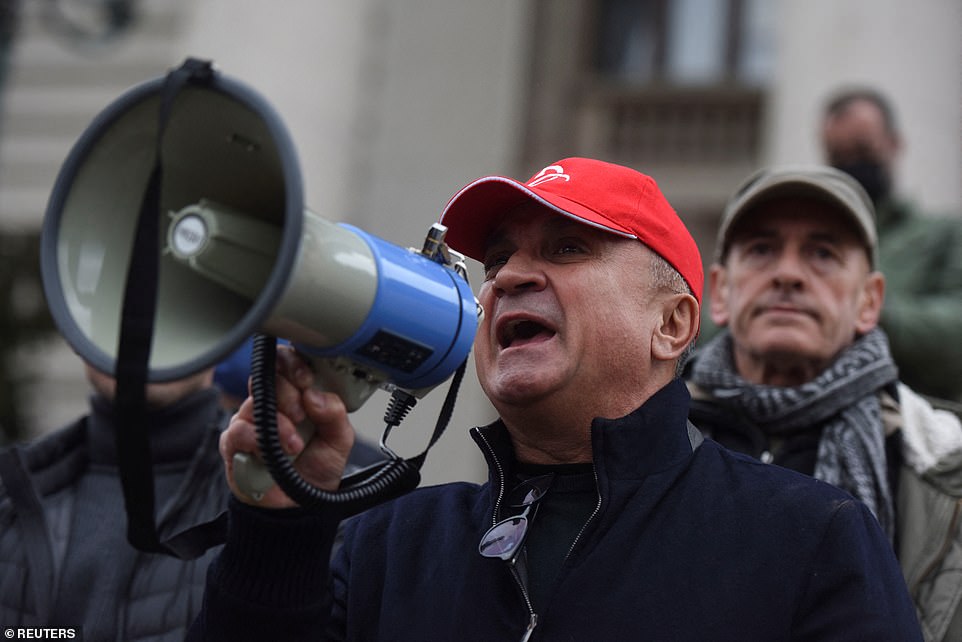 Pictured: Srdjan Djokovic, father of the world number one tennis star speaks through a megaphone earlier today in Belgrade 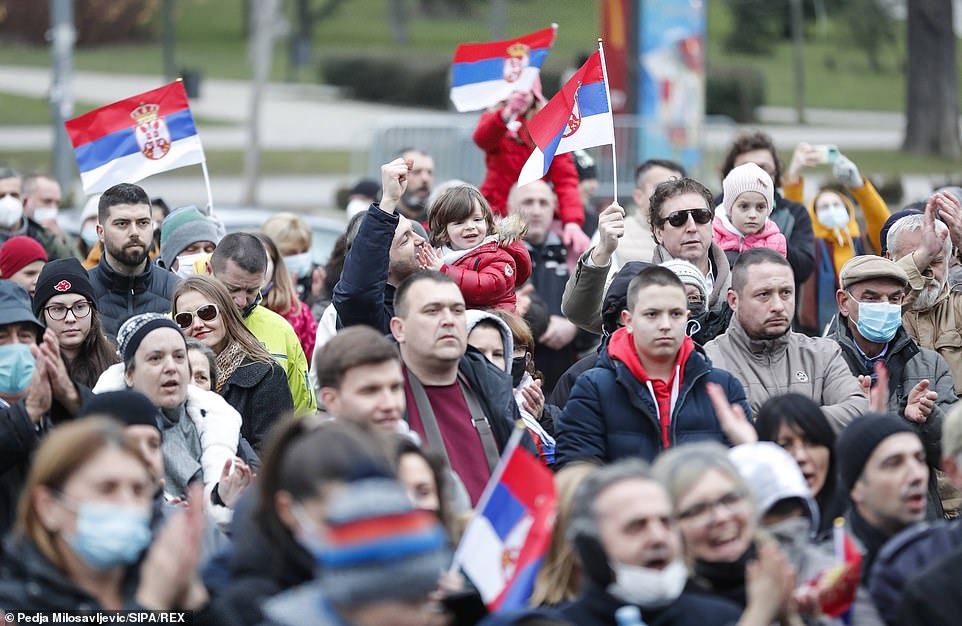 Speeches were made through megaphones and people held aloft banners and Serbian flags as people made their voices heard on the matter.

The tennis superstar could be kicked out of the country next week after he arrived in Melbourne for the upcoming Australia Open late on Wednesday night before being rejected by Border Force officials over vaccine exemption criteria.

Djokovic will spend the next four days detained in a refugee detention hotel after the Federal Court adjourned his appeal to remain in Australia until Monday.

The Serbian president has leapt to Djokovic’s defence and singled out Mr Morrison as he accused Australian authorities of a ‘political witch hunt’. 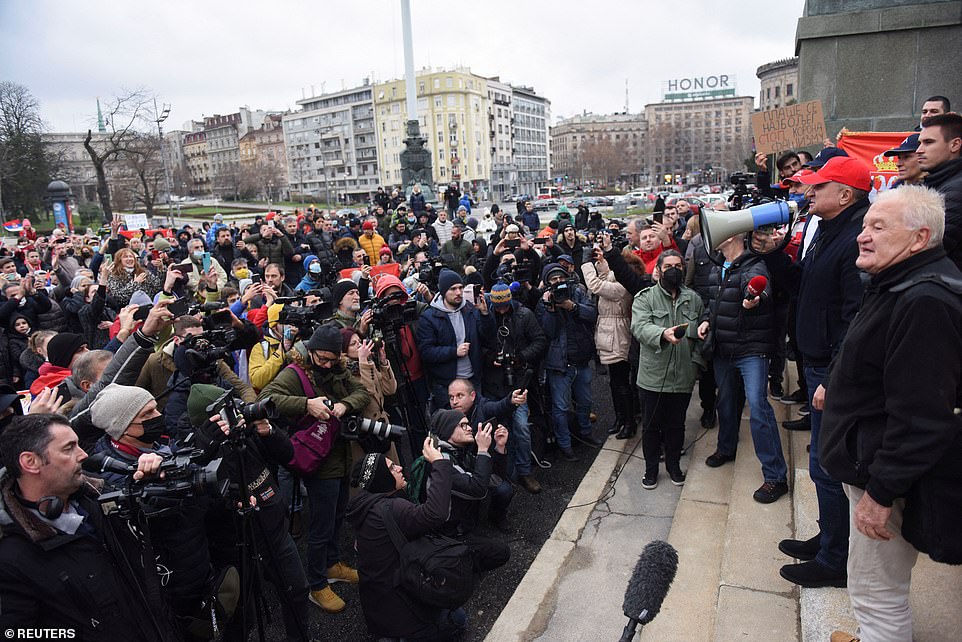 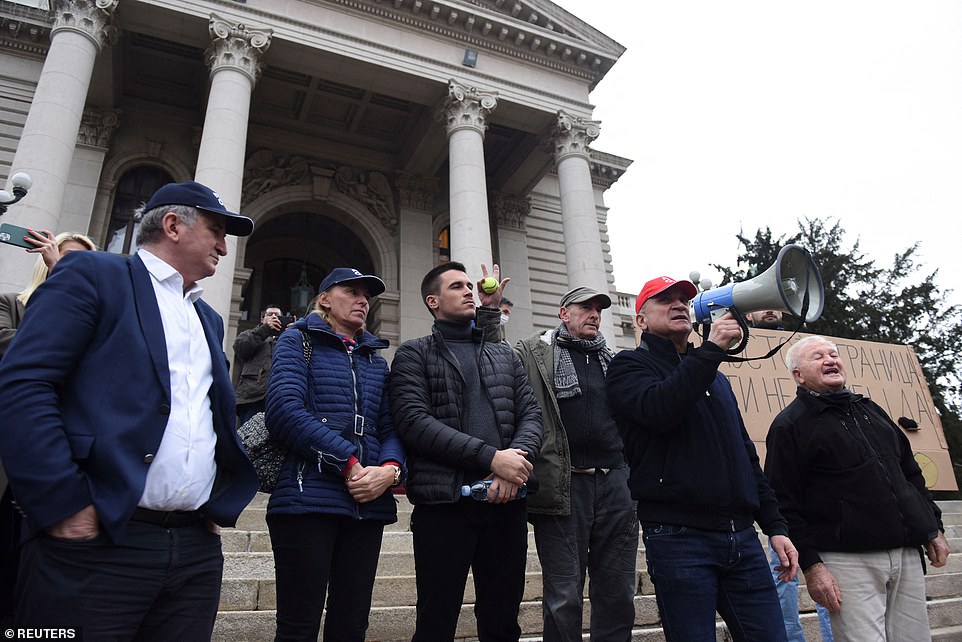 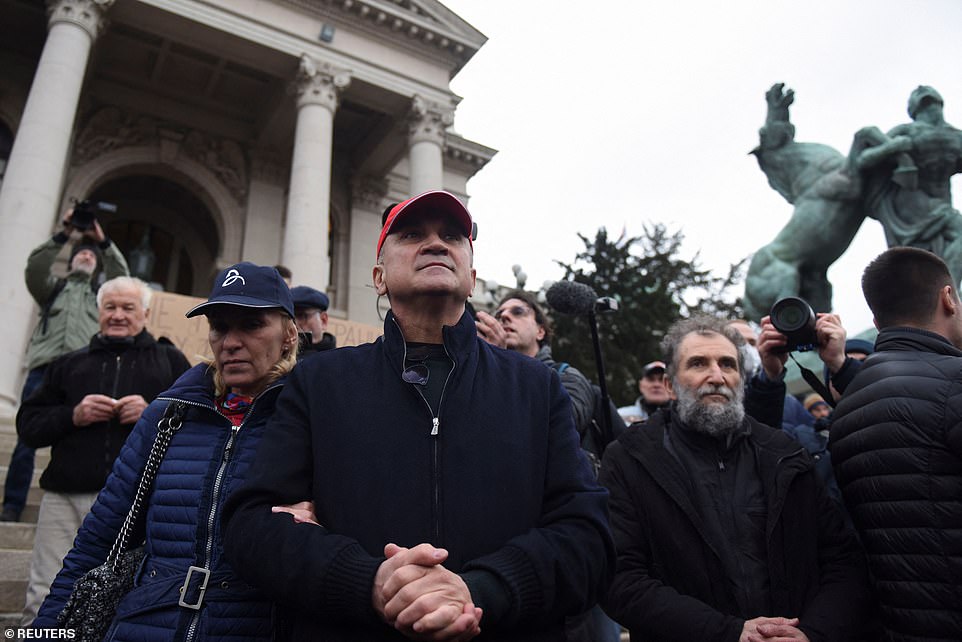 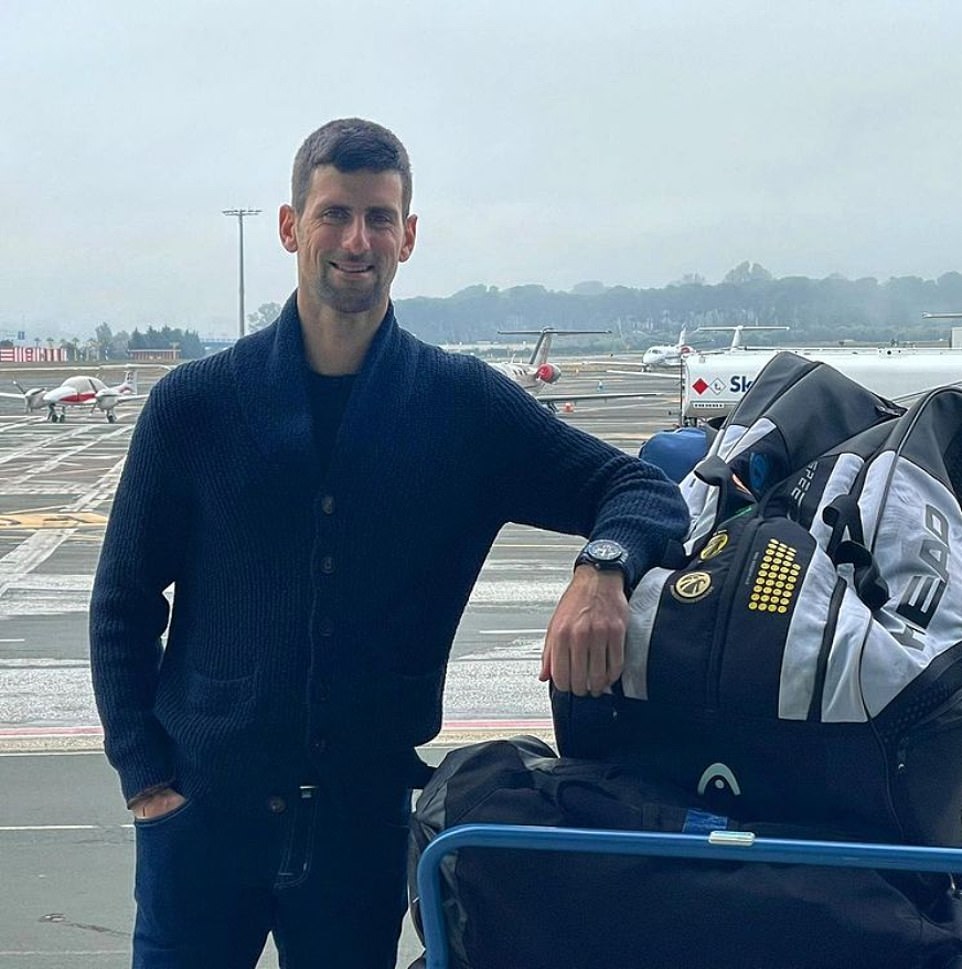 ‘What is not fair-play is the political witch hunt by everybody including the Australian Prime Minister pretending that the rules apply to all,’ Mr Vucic said on Thursday.

He claimed other tennis stars were permitted to enter Australia with medical exemptions, but two unnamed players are now facing additional scrutiny.

Of the 26 players and support staff who applied for an exemption to attend the Grand Slam, only a handful were accepted, according to Tennis Australia boss Craig Tiley.

The Serbian president described Djokovic’s treatment as ‘infamous in the proper sense of the term.’

The star’s Australian Open title defence and quest to become the greatest men’s tennis player of all time appear to be in tatters unless his appeal is successful one week out from the Melbourne Park Grand Slam. 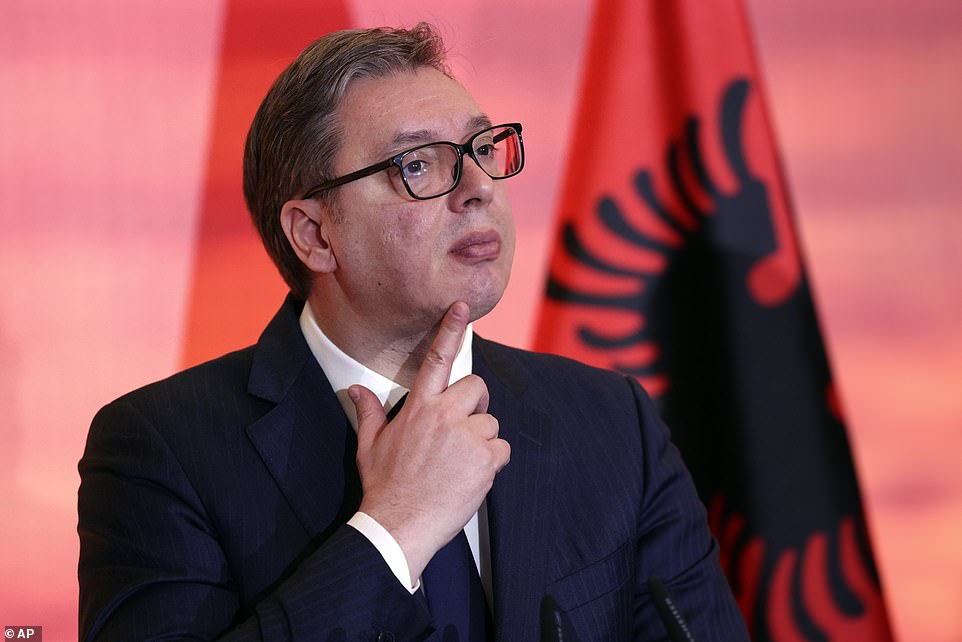 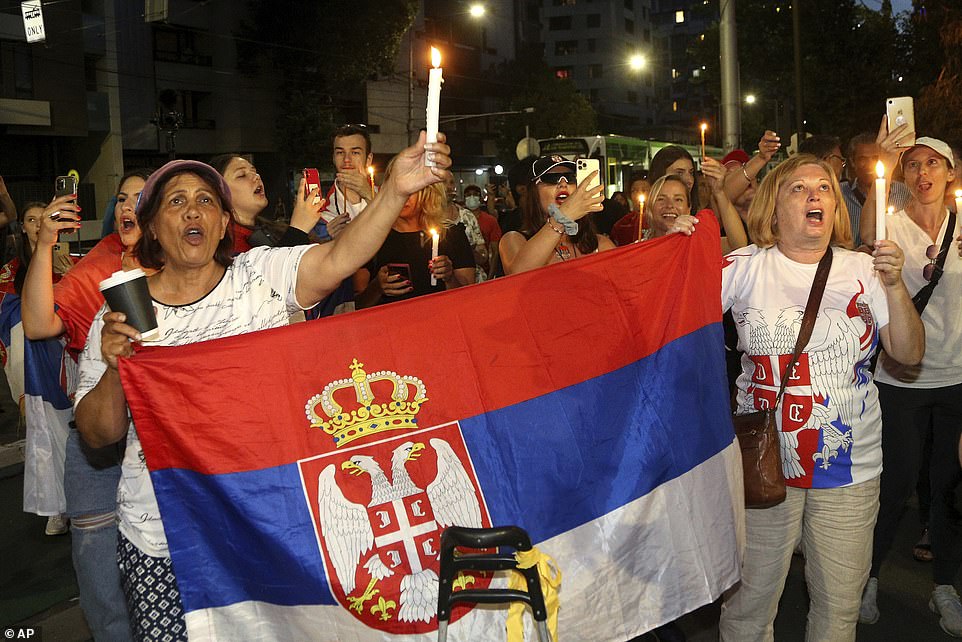 ‘I fear that this relentless political pursuit of Novak will continue till the moment they can prove something, because when you cannot defeat somebody then you turn to these type of things,’ Mr Vucic said.

Serbian authorities have already been in contact with the Australian ambassador, while Prime Minister Ana Brnabic hopes to get in touch with a senior member of Australia’s Home Affairs department.

Mr Vucic has also been in contact with Djokovic as the 20-time Grand Slam champion spends Orthodox Christmas alone and in detention.

‘I told our Novak that the whole of Serbia is with him, and that our authorities are taking all measures to stop the harassment of the best tennis player in the world in the shortest possible period,’ Mr Vucic posted earlier on Thursday. 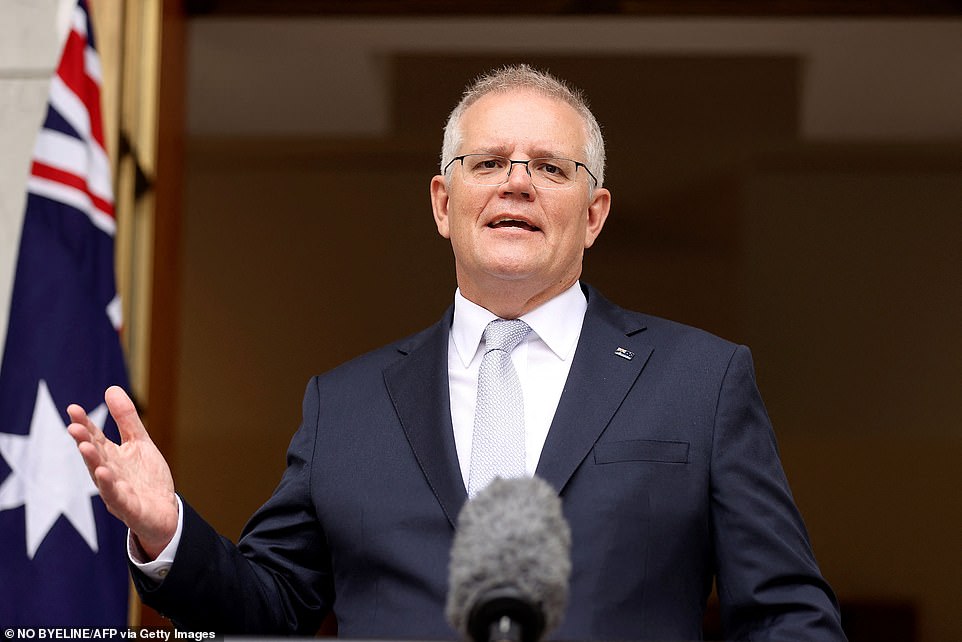 ‘What is not fair-play is the political witch hunt by everybody including the Australian Prime Minister (pictured on Thursday) pretending that the rules apply to all,’ Mr Vucic said on Thursday. 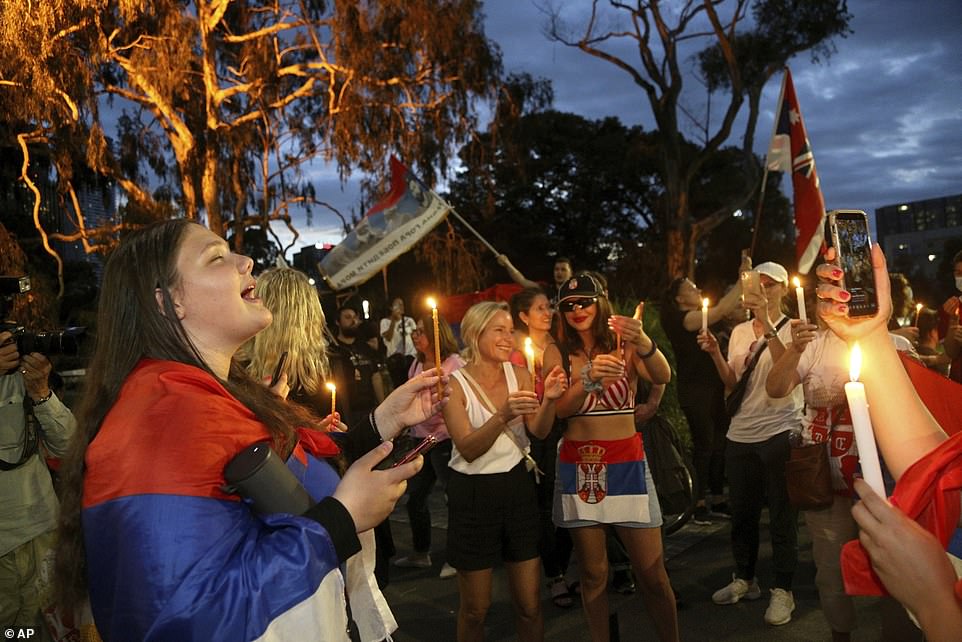 ‘In accordance with all norms of international public law, Serbia will fight for Novak Djokovic, for justice and truth.’

Serbian newspaper Novosti slammed the visa cancellation as hypocritical while media out Informer described it as ‘tyranny’.

‘The police treat Novak as if he were the biggest TERRORIST,’ the right-wing tabloid declared.

Back in Australia, dozens of fans and Serbian Australians braved the rain to gather for a candlelight vigil outside the Melbourne quarantine hotel where Djokovic is being detained.

Many were draped in Serbian flags, sang songs and held signs pledging their support for the world number one as a heavy presence of police watched on. 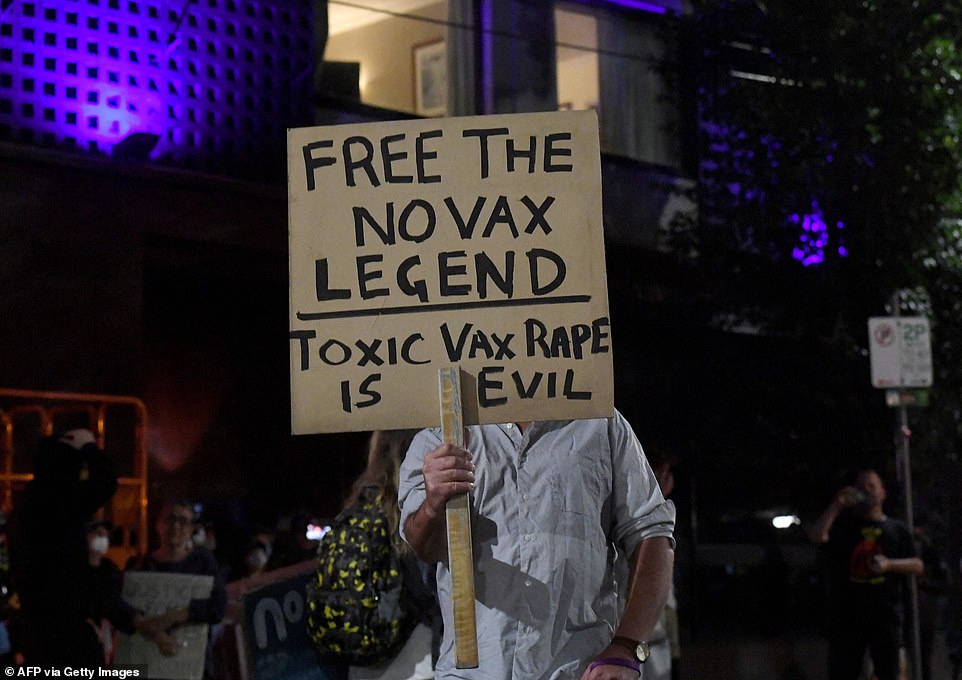