Nurse brawls with ranting passenger on the Chicago subway

A nurse was filmed brawling on the Chicago subway with a ranting passenger.

Witnesses say the man was shouting to the male nurse about the pandemic and blaming health care workers for the crisis.

The altercation was filmed by passenger Katrice Hardaway on her cellphone. 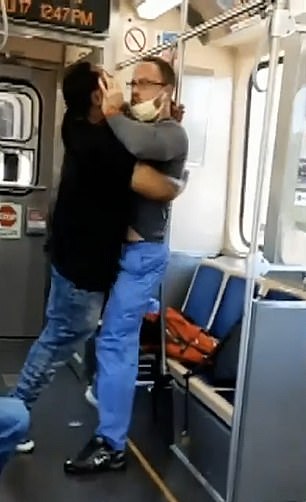 A nurse was filmed brawling on the Chicago subway with a ranting passenger, left and right

The footage starts with a man wearing a black shirt standing over the nurse, who is seated in a carriage while wearing a mask, and ranting at him. The man blamed health care workers and the nurse personally for the coronavirus pandemic, it has been claimed.

The man fails to leave the nurse alone and he eventually stands up from his seat and starts fighting with him as alarmed passengers look on.

‘There’s fighting on this train!’ one woman can be heard shouting as the men struggle against each other.

Hardaway claimed the nurse asked several times for the man to leave him alone before the fight broke out.

She then hit the train’s panic button.

Other passengers are seen trying to intervene to break up the fight.

As the train pulls into a station the perpetrator refuses to get off and the nurse departs the carriage instead, followed by Hardaway, who later handed the footage over to police.

The nurse is reportedly pressing charges against the man, who currently remains at large.