Keith Raniere got far more than he bargained for last April while planning some group play at the Mexican hideaway where he and his harem of sex slaves decamped amid fears the cult leader might be indicted.

The Nxivm founder responded by hiding himself away in a closet said Salzman, while she and the other girls were left to fend for themselves as armed agents with bulletproof vests started to storm the property.

‘My main concern was to protect Keith,’ testified Salzman, who was on the stand for the third day.

New details: Keith Raniere hid in a closet while armed agents stormed his hideaway in mexico last year, Lauren Salzman (above in January) testified on Tuesday 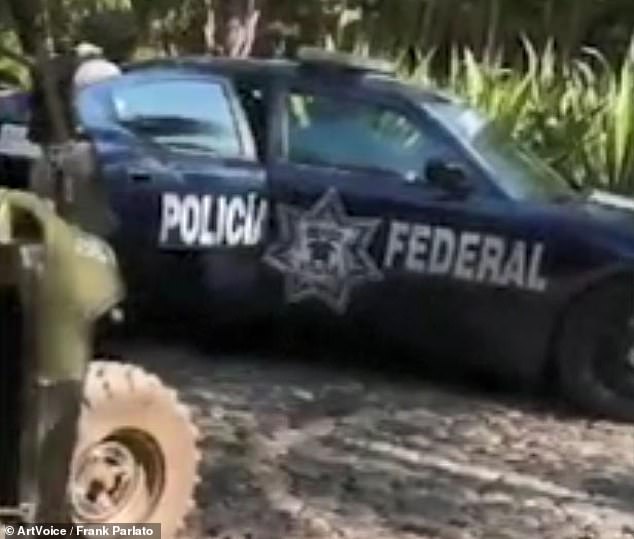 Away they go: Salzman said she gave up Raniere after federal agents (above) kicked down the door and drew guns on her, and noted she felt guilty for months about this

Salzman said that the women – who included Nicki Clyne, Allison Mack and Loreta Graza – were planning to have a group session in which each of the women planned to perform oral sex on Raniere.

On Tuesday, Salzman said she was not looking forward to this ‘recommitment ceremony.’

Salzman managed to avoid the ceremony in the end after federal agents stormed the property, located in Puerto Vallarta.

She was in the house with Raniere at the time, and shocked at the scene that was unfolding in front of her eyes.

‘I looked outside the window and all I could see was agents with machine guns all around the property,’ said Salzman.

‘But Keith refused to leave.’

She tried to hold the agents at bay while Raniere fled and hid inside a closet, but eventually she shouted out his name when the men kicked in the door and drew their guns.

‘For months after that I felt like such a failure for not being strong enough. I felt like I let him down,’ said Salzman.

Salzman, a co-defendant in the case who accepted a plea deal last month, spoke about the plans to build a sex dungeon during her second day on the stand.

She also read excerpts from a manual given to the women in the group.

‘Your sole highest desire must be to further your Master from whom all good things come and are related,’ said the text, which was allegedly written by Raniere and Allison Mack.

That is why the dungeon was being built with a cage where women could be locked away until the master, Raniere, wanted to let them free

‘The best slave derives the highest pleasure from being her Master’s ultimate tool,’ said Salzman while reading another passage from the manual. 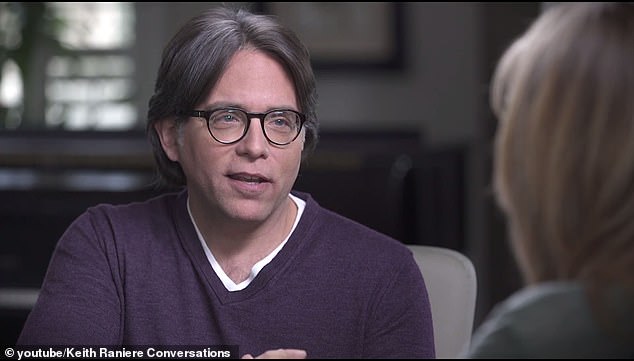 Close bond: Salzman’s mother Nancy founded Nxivm with Raniere (above in a promotional video) in the 1990s

Salzman could prove to be a problematic witness given the fact that she herself helped Raneire keep a girl locked in her room for close to two years.

She is also the daughter of Nxivm’s co-founder, Nancy Salzman.

He encouraged the former to starve herself said Vicente, while the latter was ordered to wear a jock strap as punishment for her know-it-all attitude.

Jurors also saw photos of the newly branded sex slaves in group, taken shortly after each was held down and mutilated with a cauterizing pen.

Only the jurors were able to see those photos, which Vicente said were kept in a drop box that had been created by Allison Mack.

That same drop box also had the collateral of each of the women, damning information that could be used against them as blackmail should they ever try and leave the group.

Vicente said that all the women around him started getting drastically thinner around 2015, the same time DOS was created, prompting him to ask Raniere is he was concerned with the situation.

He testified that Mack in particular seemed to be translucent and gaunt, prompting him to speak with Raniere.

And in a truly bizarre moment, Vicente also recalled how Raniere once urged his wife to lick a puddle and run into a tree when they were having relationship issues.

Raniere said this would help her with her boundary issues.

Vicente testified that he was the person who alerted Catherine Oxenberg that her daughter India was becoming wrapped up in the group and rapidly losing weight, much to his concern.

The starvation of Nxivm members has now played a key part in the testimony of the first two witnesses in the case.

Sylvie, 32, said she had been a member of the group for 13 years, and was in the process of planning her sex slave branding ceremony when the group finally fell apart last year.

Just as harrowing was her description of the extreme lengths she went to starving herself and exercising, allegedly at the direction of Raniere and Clare Bronfman.

She said that at one point she weighed just 88lbs, and was training six hours a day to be a competitive runner.

That training ultimately resulted in her developing an abscess that became a fistula and required surgery.

A medical professional told her to stop working out, but she said that Bronfman told her it was fine to exercise at the same rate so long as she was not in any pain.

Sylvie later broke down in tears while speaking about an alleged unwanted sexual encounter with Raniere, who she had been ordered to seduce.

‘I felt shame,’ said Sylvie of the day she went to Raniere’s home so he could perform oral sex on her.

When it was over, he allegedly took a photo of her genitalia.

Raniere has pleaded not guilty to charges including sex trafficking and child pornography, and his lawyer has argued that he never forced any women to act against their will.

He faces life in prison if convicted.

Sylvie told jurors how her involvement in Nxivm eventually led her to become a slave in DOS, where she submitted herself entirely to a ‘master’ named Monica.

She recited a lifetime vow to obey her female master at a commitment ceremony and wore a necklace called a ‘dog collar.’

As was expected of slaves, Sylvie recruited other women to join DOS.

She now lives in England with her husband, also a former Nxivm member, and testified under an immunity agreement with prosecutors.

‘We were taught that women were self-absorbed, narcissistic,’ she said.

‘I feel like in some ways that was the worst part of it for me.’