NYPD Police Commissioner Dermot Shea said that the criminal justice system is ‘imploding’ as New York City sees a dramatic spike in street shootings and killings during the month of June.

During a meeting with reporters Wednesday, NYPD Police Commissioner Dermot Shea addressed the rise in shootings throughout the city and the stagnancy of criminal cases.

‘You have to step back and look at this. You have a criminal-justice system that is imploding,’ Police Commissioner Dermot Shea said, according to the New York Post.

‘Imploding. That’s the kindest way to put it,’ he added.

Shea also noted that many of the criminal cases supposed to be in process were  ‘ongoing,’ ‘stagnant’ or ‘deferred.’

‘Each one of those represents somebody not being held accountable and no consequences,’ Shea said.

Police believe that many of the people pulling the trigger in these shootings are either out on parole or have open cases – issues made worse by the city’s coronavirus pandemic response.

‘You hear terms such as supervised release right now, that is a fallacy,’ Shea said, CBS New York reported.

‘There is no supervision. There is just release, and you are seeing the repercussions of that across the city.’

Shea’s comments come on the heels of a particularly violent week in NYC, during which 75 people were injured in 55 shootings over a seven day period. 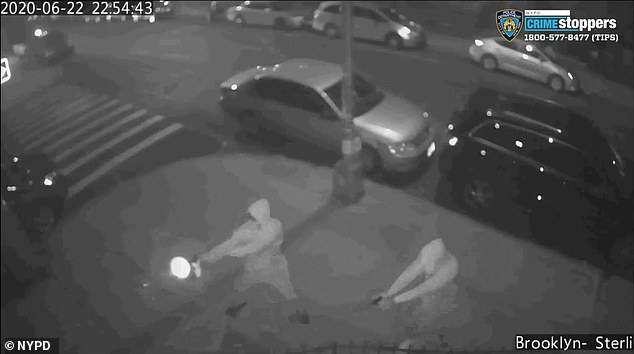 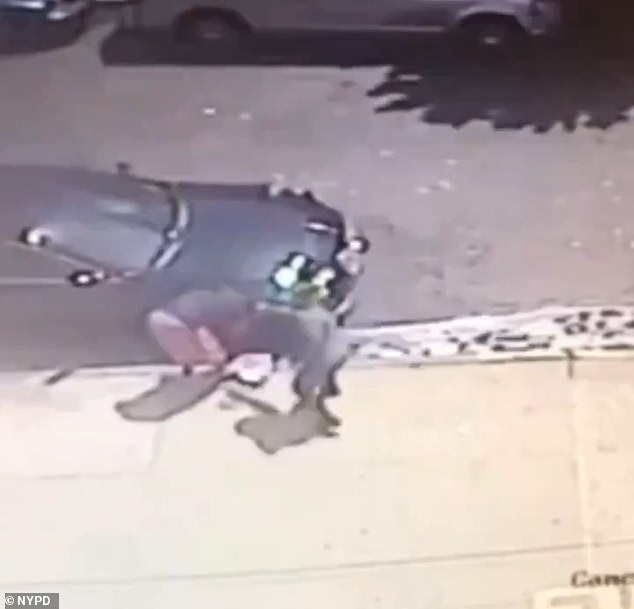 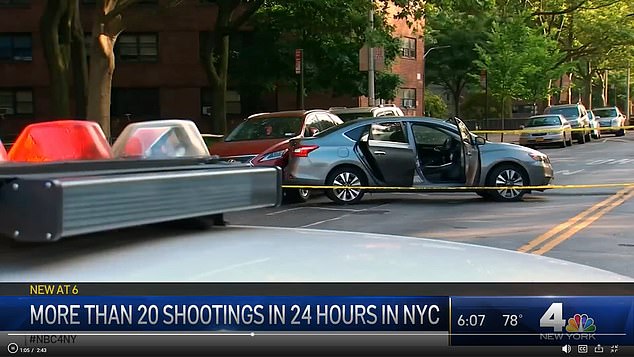 These numbers represent a 342 per cent jump in shootings last week compared to the same period in 2019.

Between Friday and Sunday, two people died in 28 shootings, while 38 others were left injured, police said, according to WPIX.

One fatal shooting on Saturday, which was caught on surveillance video, involved clothing designer and graffiti artist Kenneth Singleton, 35, who was washing his car outside his home in Brooklyn, when a man walked up to him and shot him, point blank, in the neck.

On Monday, there were 11 shootings, which left 17 people injured.

Five people alone were wounded during a shooting at an 11pm vigil that night in Brooklyn, the New York Post reported.

There have now been 125 shooting incidents in New York City during the month of June alone, according to the NYPD.

‘We have to go back to June of 1996 to get a worse start for June,’ NYPD Chief of Crime Control Strategies Michael LiPetri told the New York Post on Monday.

Earlier in the week, Shea told NY1 that the increase in violence seen now was on its ways from the beginning of the year.

‘We have been trending this way for a while, and the shootings are just the latest symptoms,’ Shea said. ‘We need the criminal justice system to start working, quite frankly.’

He insinuated that criminal justice reforms, including the elimination of cash bail for certain offenses, has had a role in the increase in violence throughout the city.

‘People do not want to talk about this, but I will not be shy and talk about it. There is literally almost no one in jail,’ Shea said.

‘When you ask the Police Department now to somehow wave a magic wand and fix when you are putting dangerous people back on the street, you’re seeing what’s happening. And the shame is again, this is not a surprise.’

Shea said that many of the shootings that took place over the past weekend involved ‘three common nexuses: alcohol, marijuana and dice games.’

The shootings were therefore tied to quality of life offenses, which the NYPD has not been as focused on as they had been in the past.

NYC Mayor Bill de Blasio said that hundreds of police officers normally in desk jobs would be heading out onto the street as part of the ‘Summer All Out’ program which is beginning now.

These officers would be focusing on the 20 precincts throughout the city experiencing issues with gun violence – specifically those in the Bronx and North Brooklyn.

‘We know when there’s shootings they beget more shootings. We understand retaliation, we understand gang dynamics. And I’ve heard from a number of community leaders that they are increasingly concerned,’ de Blasio said Monday.

He also said that part of the city’s effort to keep the peace would be spending $10million to increase its crisis management system, which focuses on sending community-based organizations into neighborhoods where there are high numbers of gun violence.

On June 15, Shea revealed that the NYPD was disbanding its plainclothes, Anti-Crime Units, which specialized in targeting armed suspects.

In the wake of the George Floyd protests, de Blasio and the City Council have said that they would be cutting the NYPD’s $6billion budget and moving some of the funds towards youth and social services.