A woman whose weight skyrocketed to over 400lbs while she was in an abusive relationship has shed a whopping 235lbs through ‘regimented’ diet and exercise alone.

Annamarie Rivera, 30, from Trumbull, Connecticut, started her weight loss journey in 2010 when she made the sudden decision to join a gym on her way home from work. Seven years later, Annamarie has gone from a size 28 to an 8, and has an entirely new outlook on life.

‘I have never loved myself more than I do now,’ she told Daily Mail Online. ‘My accomplishments have given me such a different mindset on the way I live my life day today. I have become so regimented and disciplined in every aspect. My work ethic and dedication are qualities that most people admire about me.’ 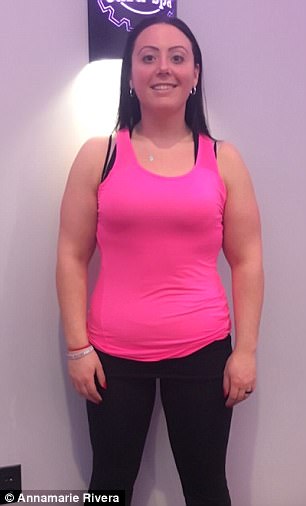 Success: Annamarie Rivera, 30, from Trumbull, Connecticut, weighed over 400lbs when started her weight loss journey, and now she weighs 176lbs 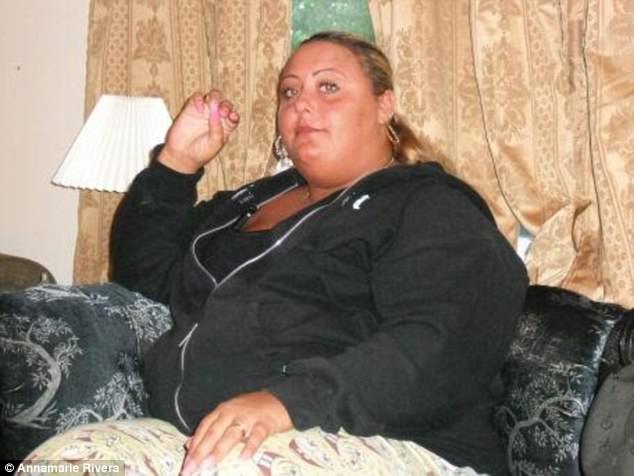 Rock bottom: At her lowest point, Annamarie was emotionally eating and binging while in an abusive relationship 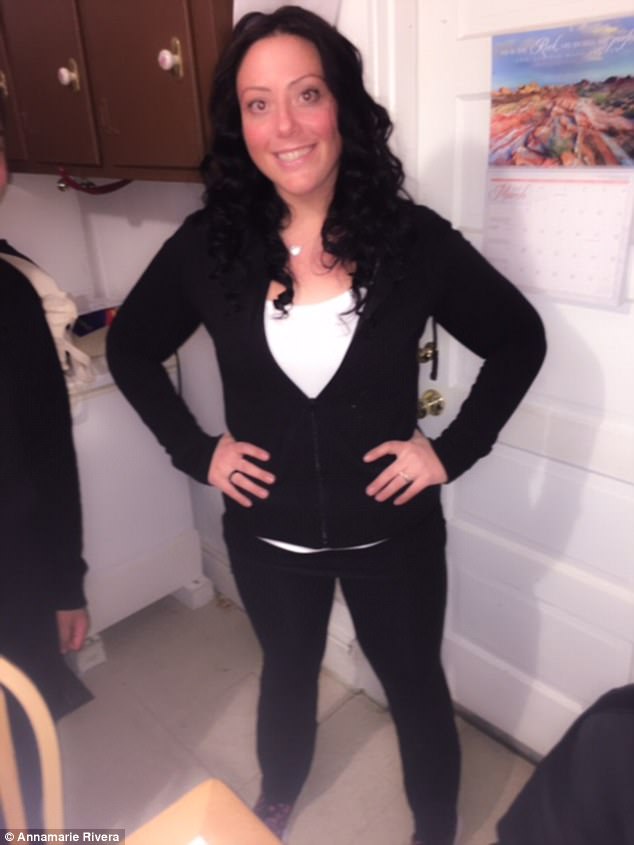 Amazing: Since the spring of 2010, Annamarie has lost 235lbs through diet and exercise alone

Annamarie explained that she used to drive past Planet Fitness all of the time, but it never crossed her mind to join a gym and try to lose weight.

‘Although I knew how unhappy and miserable I was, not only with my body but in life, it was never something that I considered,’ she said. ‘Looking back at that stage in my life I can truly say it was the lowest I ever was.’

Annamarie said that at the time she struggled with low self-esteem and was in a ‘very bad, toxic and abusive relationship’ with someone who put her down constantly, which led emotional eating and binging.

She also suffered from acid reflux and said her ‘immune system was so shot’ that it was scary how often she found herself at the doctor’s office because she was sick. 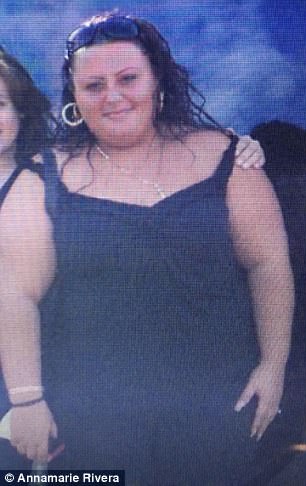 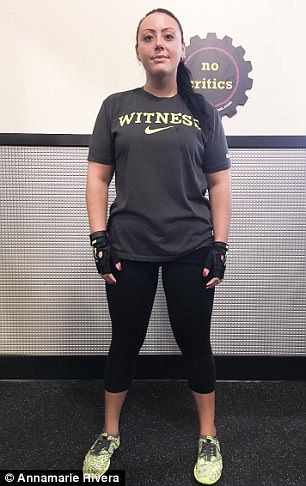 Life-changing moment: After years of being overweight, Annamarie made a sudden decision to join a gym on her way home from work 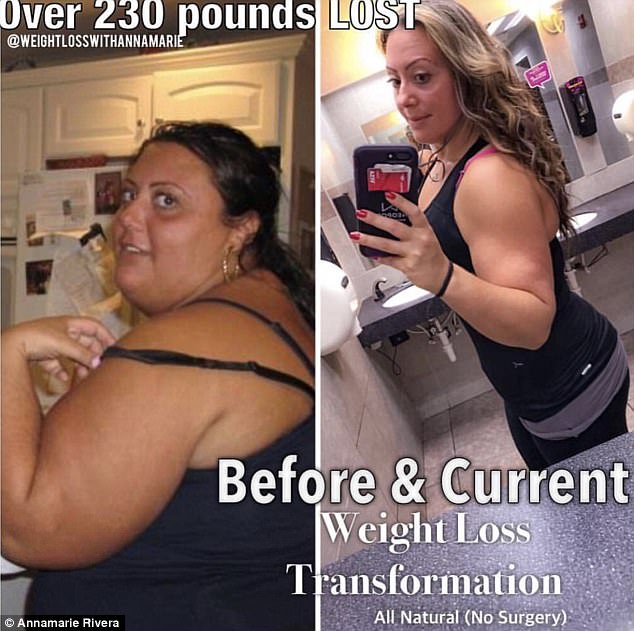 Step by step: Annamarie started by walking on a treadmill and cutting out fast food and sugary drinks

‘One day I was driving home from work, drove past Planet Fitness and did a U-turn,’ she recalled. ‘I pulled in and asked to sign up for a membership.

‘As I got into my car to leave I was holding the shirt, sticker and pen they gave me. And I just said to myself, “This is day one of my new life.”‘

Annamarie told Pop Sugar that she started by walking on the treadmill and by the park behind her house. She kept up with her cardio and eventually incorporated weight training into her routine.

She also cut out sugary drinks, including soda, and fast food, admitting that she used to eat McDonald’s a couple of times a day. 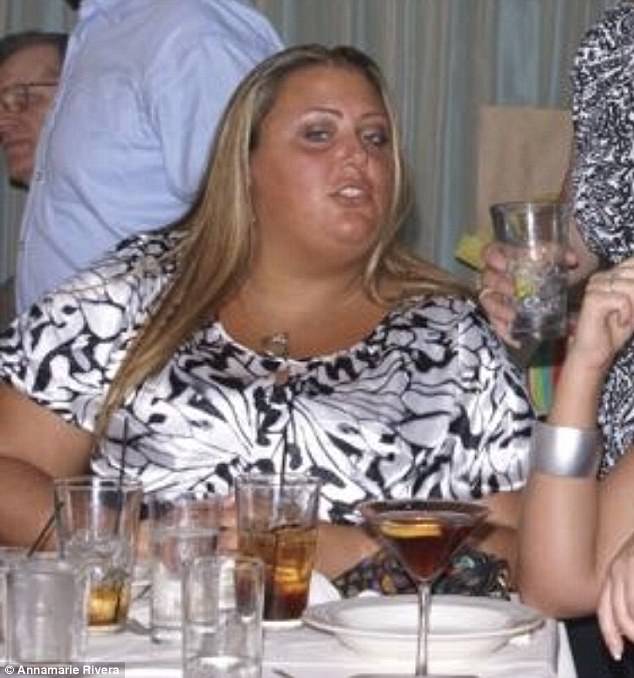 Opening up: At her heaviest, Annamarie said she would have McDonald’s a couple times a day

Look at her now: Over the past seven years, she has gone from a size 28 to a size 8 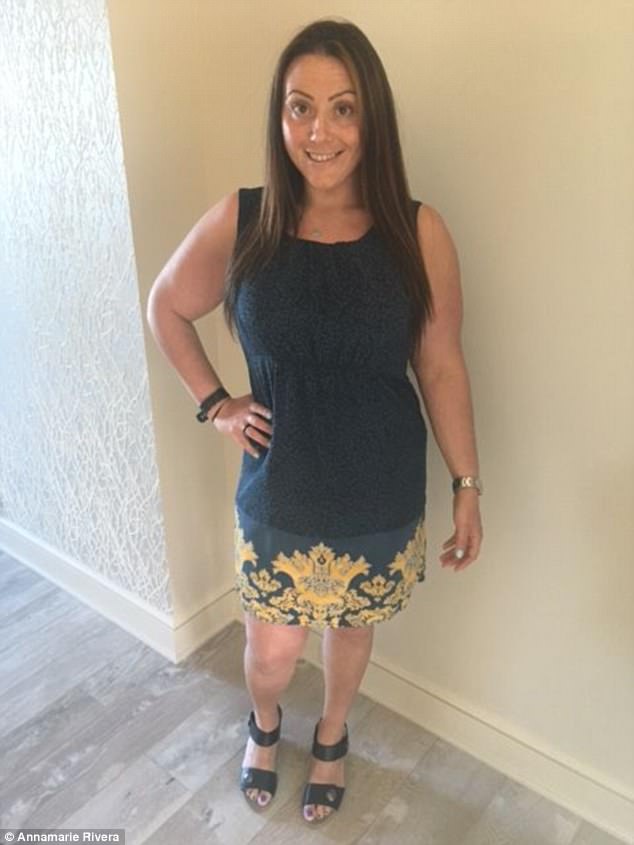 New woman: Annamarie said she has about 10lbs of excess skin that she can’t tone, but she is proud of her success

Annamarie didn’t follow a particular diet program, she just lowered her food intake and started adding healthy protein and vegetables to her meals while working out.

Although she isn’t sure of what her starting weight was when she began her weight loss journey, Annamarie said that after she lost a few pounds she stepped on the scale and learned she weighed 411lbs.

Annamarie told Daily Mail Online that she lost nearly 100lbs within the first year, but she chose to ‘take the slow and gradual route’ as she continued to lose weight, explaining it took her a few years to lose an additional 130lbs.

‘Everyone is different but I wanted to take a back to basics approach and do it without the help of a trainer, a plan, or following one particular plan,’ she said. ‘I wanted to do everything on my own.’ 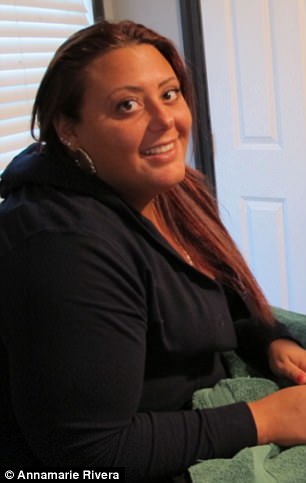 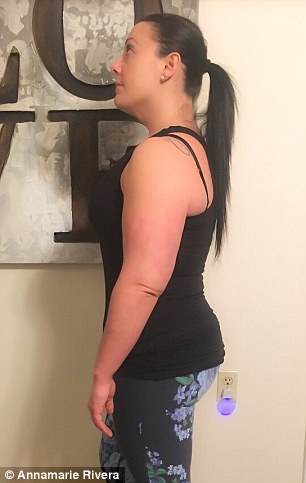 Sharing her story: Annamarie now has more than 71,000 Instagram followers, and she proudly shares before and after photos of herself 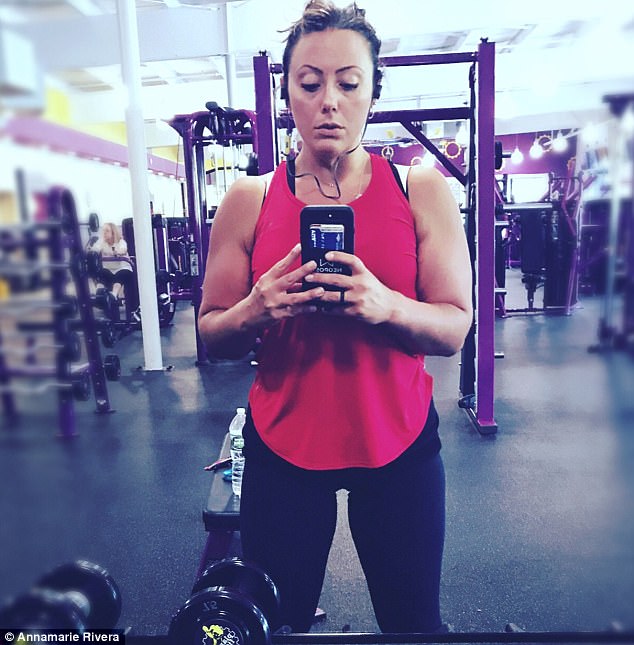 Focused: Annamarie said working out has made her ‘regimented and disciplined’ in every aspect of her life

Strike a pose: ‘I have learned so much throughout my journey,’ she said

She now works out six days a week and eats six times per day, three meals and three snacks. After shedding 235lbs, Annamarie weighs 176lbs and wears a size 8 even with the the over 10lbs of excess skin she has hanging on her body.

‘It’s when you’ve had a bad day at work, facing personal issues, or other obstacles and you would normally reach for a glass of wine or a bag of chips. At that point that’s when you have to let your goals become your main focus. It’s better to always think long term.’

Annamarie now has more than 71,000 Instagram followers, and she proudly shares before and after photos of herself and pictures of her healthy meals in the hope of inspiring others.

‘I have learned so much throughout my journey and lost such a massive amount of weight that I’m now able to provide help and advice to others who didn’t think it was possible,’ she said.