Only one London borough has a bigger coronavirus outbreak than England’s average, MailOnline can reveal amid fears the capital will be dragged into a Tier Three lockdown within two weeks because it’s crucial R rate could be as high as three.

Ealing had a weekly infection rate of 228.5 cases per 100,000 people in the week ending October 24, just slightly above the national average of 225.9. But for the other 31 boroughs, their rates were below this benchmark.

And when the city’s Covid-19 outbreak is broken down to smaller districts within the boroughs, only six areas had infection rates at 400 per 100,000, – which is the level across much more badly affected Tier Three Liverpool, Manchester and Sheffield.

Nonetheless, no boroughs in the capital have an infection rate below 100 per 100,000, way above the level of 20 per 100,000 at which the Government considers curbs on travel to foreign countries.

Scientists today warned the figures suggest more restrictions are ‘on the cards’ for Londoners ‘especially given the numbers are heading upwards’. But others poured cold water on the data, arguing it says very little because it is not released alongside data on the number of tests being done in each region of the city.

Experts have said that if the number of tests done increases, this will also pick up more asymptomatic cases and make the infection rates for a region much higher. The Government publishes testing data nationally, but not for individual regions.

London was moved into Tier Two restrictions two weeks ago after Sadiq Khan pushed for tougher measures, with bans on visiting other households, or heading to pubs, bars and cafes with people Londoners don’t live with.

It comes after a Government-led study warned the capital’s R rate may have surged as high as three, as the capital continues to grapple with rising infections.

And of the entire south of England, London was thought to have the highest prevalence of coronavirus at 0.89 per cent, suggesting more than 80,000 of the city’s nine million residents were infected at any given moment. 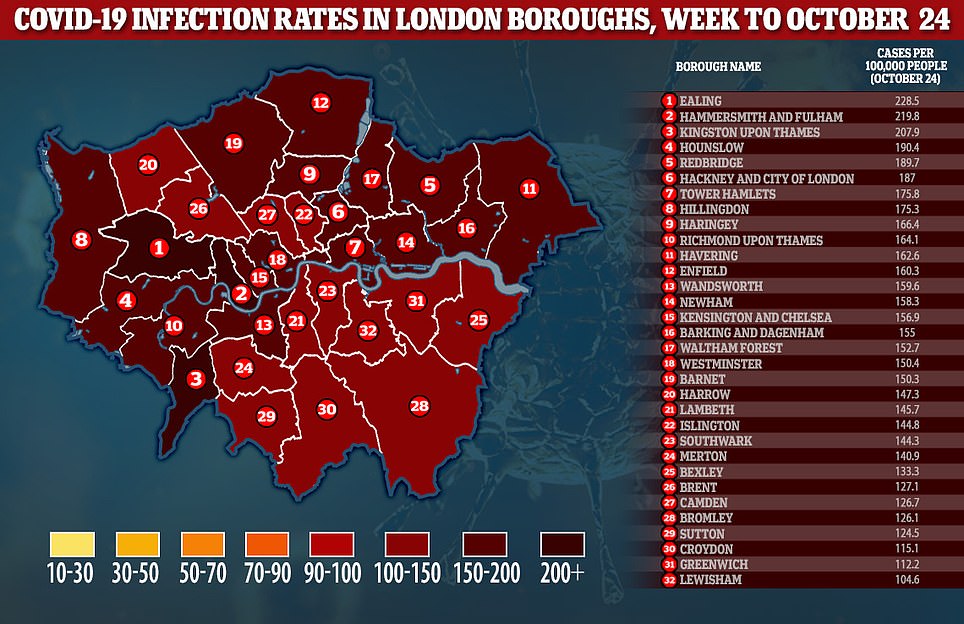 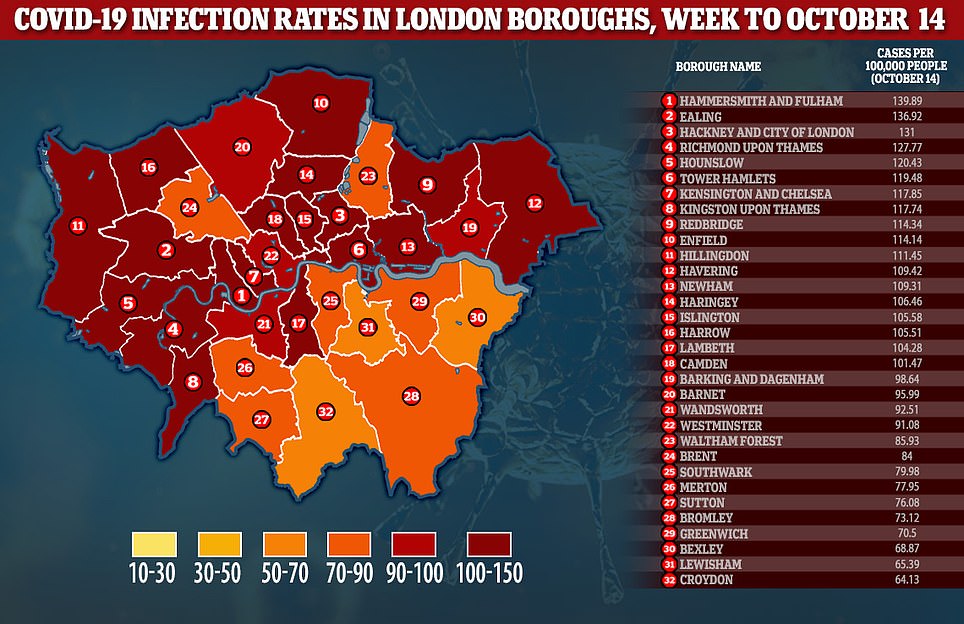 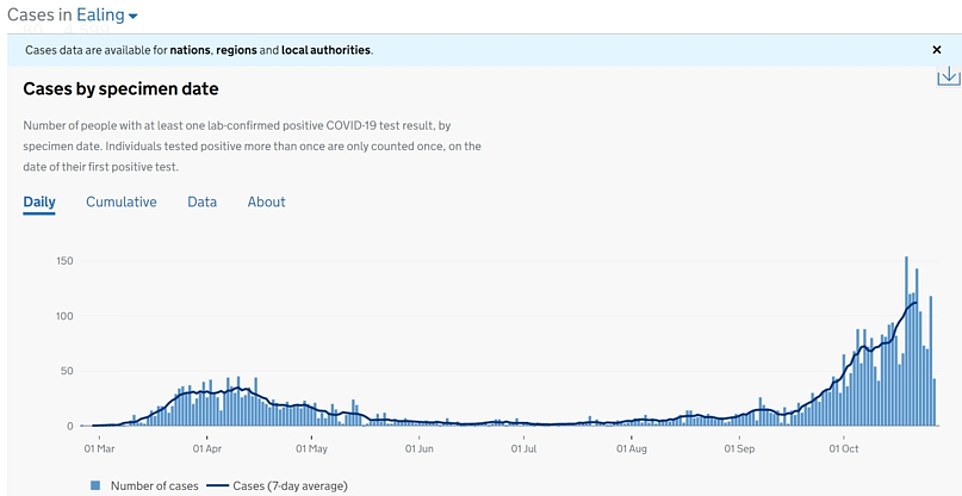 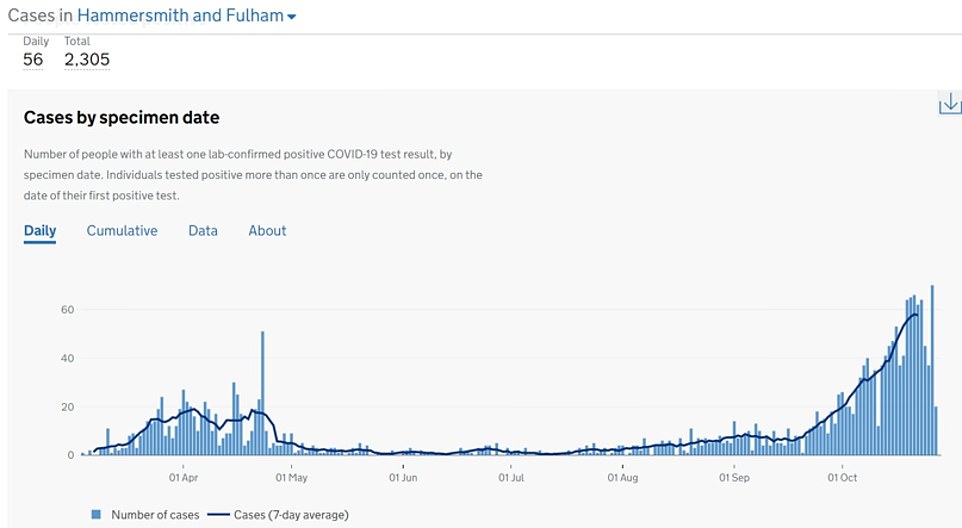 Coronavirus is spreading fastest in London, according to a study that claims the R rate in the capital is almost as high as three and infections are doubling every three days.

Researchers at Imperial College London, who today estimated a staggering 100,000 people are catching Covid-19 every day across the country, warned the city has a ‘scary’ rate of spread. For comparison, the experts claimed the national R rate is around 1.6 and cases are doubling every nine days.

They predicted the R rate — the average number of people each carrier infects — is higher than two in London, the South East, East and South West, which have mostly escaped any tough local lockdowns.

And of the entire south of England, London has the highest prevalence of coronavirus at 0.89 per cent, suggesting more than 80,000 of the city’s nine million residents were infected at any given moment.

Academics claimed the R rate in London may be 2.86, meaning those 80,000 people carrying the virus at the time of the study could be expected to infect another 229,000. The possible range of the rate — which must stay below if an outbreak is to shrink — is between 1.47 and 4.87, they estimated.

The entire city is in a Tier Two local lockdown, meaning people are banned from meeting indoors with anyone they don’t live with, except at work. Infection rates vary across the 32 different boroughs – from 223 positive tests per 100,000 people in Ealing over the most recent week, to 103 per 100,000 in Lewisham.

MPs today warned moving into Tier Three — which would ban socialising with other households and see pubs shut unless they serve substantial meals — would kill struggling businesses off completely.

Scientists behind Imperial’s study, funded by the government, came out in favour of a national lockdown, which has now been adopted in France for a second time, and said the results show that current social distancing rules aren’t doing enough; Britain, they said, should ‘think about changing the approach’.

Despite being below England’s average, however, none of the boroughs have cases below 100 per 100,000.

Professor Paul Hunter, from the University of East Anglia, warned the data suggested the city – and its population of almost 9million – will soon need to move into Tier Three.

‘I think Tier Three is very much on the cards (for London),’ he told MailOnline, ‘especially given that case numbers are heading upwards’.

‘From a public health perspective I think a move up to Tier Three probably should be done sooner rather than later, unless the Government has access to data that means it is not as bad as it looks.’

He added: ‘The issue is not just the maximum number, it’s also how that’s changing.

‘So you could have a location with a fairly modest number of cases at the moment but, if it’s doubling less than once a week, you know it is heading in the wrong direction and the sooner you move it up the tier the better.

‘Case numbers across London as a whole are increasing relatively quickly, I think it’s fair to say.’

Professor Anthony Brookes, from the University of Leicester, suggested to MailOnline that the Government’s figures reveal very little about infections in the city.

He argued it was impossible to deduce much from the data because the Government is not releasing information on the number of tests done each day by region.

‘No one can know if these are reasonable decisions,’ he said. ‘I guess my plea would be that they release the number of tests done per region per week, they release it nationally but not per region.

‘This would allow you to calculate the percentage of tests that were positive, and then you could properly compare different cases at the same rate. Without that we are literally al working in the dark and having to trust someone that does have access to those numbers to make these decisions.’

A source close to Sadiq Khan warned yesterday that if they didn’t act quickly London could face a longer lockdown which would be the ‘worst possible outcome’ for health and the capital’s economy.

‘We know that when it comes to this virus, acting early and decisively is best, both for public health but also for the economy,’ they said.

‘The more we delay in implementing measures, the more stringent they need to be and the longer they have to be in place.’