Snapchat can be the place to share one’s greatest memories with the whole world, or – in this man’s case – the start of a personal demise.

An Ohio State University student who used the social media app to try and cheat on his girlfriend with another woman found himself exposed in the most public of ways when someone nearby took a picture of his phone screen, showing his first name, AJ, and his attempts to woo the other lady – and shared it on the campus’s public channel, The Buckeye Snap.

In a matter of hours the post was shared across Twitter, and people quickly began sending their own snaps in return, almost all of them featuring furious users from around the world flipping the bird, while captioning their images: ‘F**k AJ’.

Secret message: An Ohio State University student had no idea that his attempts to secretly meet up with a girl would be publicly exposed on the college’s open Snapchat channel 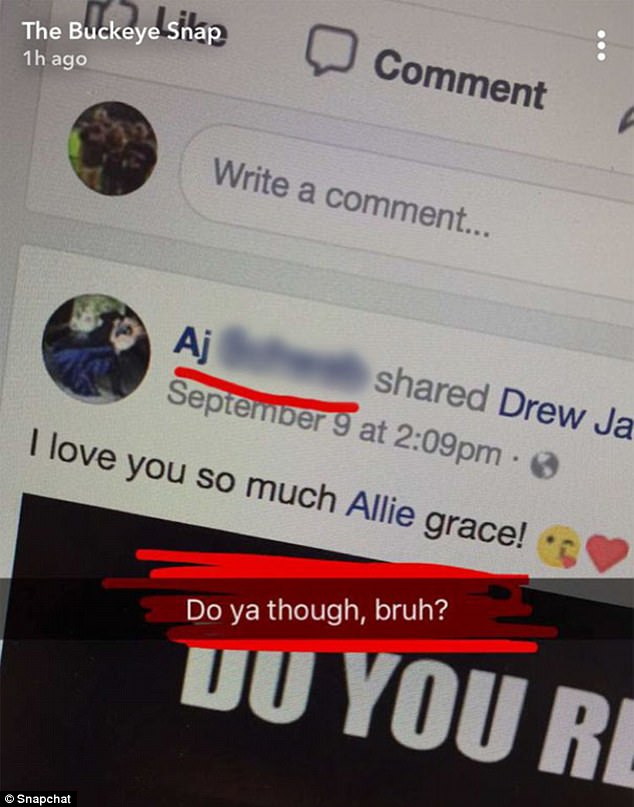 Exposed! Not only was AJ’s full name released but soon students began to share pictures of his social media pages to shame him for his infidelity 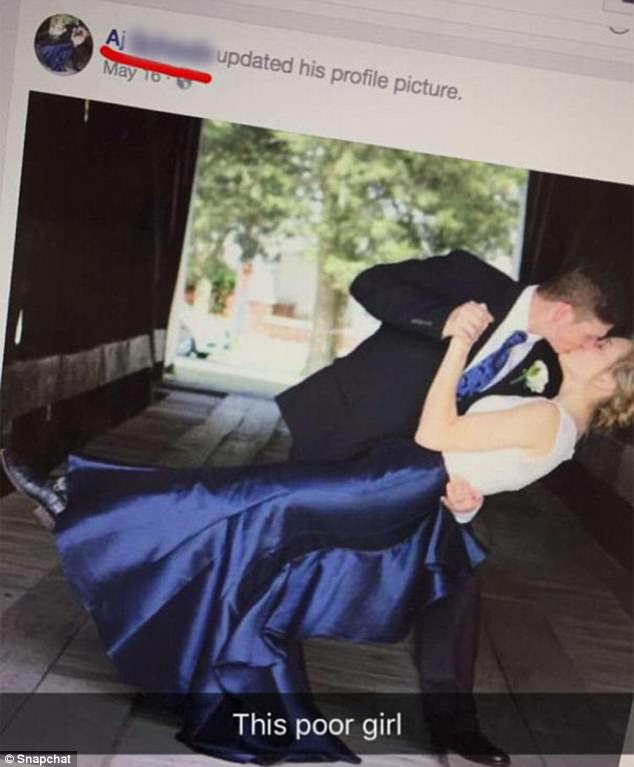 Not so fairy tale: Fans of the campus drama had a laugh with the posts, but all sided with his girlfriend who was no longer left in the dark to his sneaking around

Soon, AJ’s full name was exposed, after the original Snapchat user who exposed his cheating ways agreed to send in an unedited version of his snap so as to clear the names of other outraged AJs on campus.

From there, images of the guilty AJ, and even his poor girlfriend Allie, were shared across the web, with people offering messages of condolences for her – while slamming him and his blatant attempts to cheat on her.

Those slightly sad attempts were revealed in the original photo which prompted so much fury, capturing the conversation between AJ and an anonymous woman, who started off the chat by asking him whether he had a girlfriend – which he admitted.

After some back and forth she then confronted him on his efforts to meet up with her.

‘Won’t your girlfriend be mad if she finds out you had another girl stay with you?’ 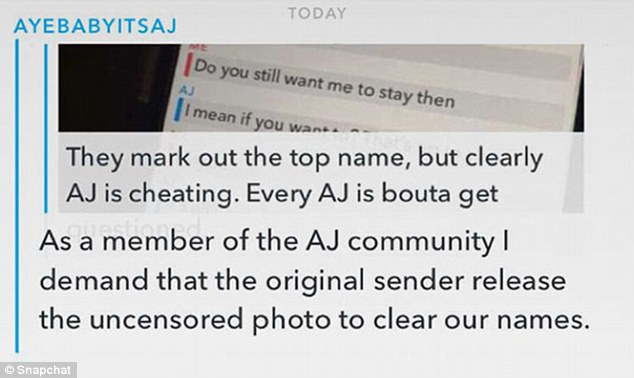 Name him! At first AJ’s last name was blocked out to respect his privacy. But after other AJ’s on campus were being called cheaters, the user later released his last name 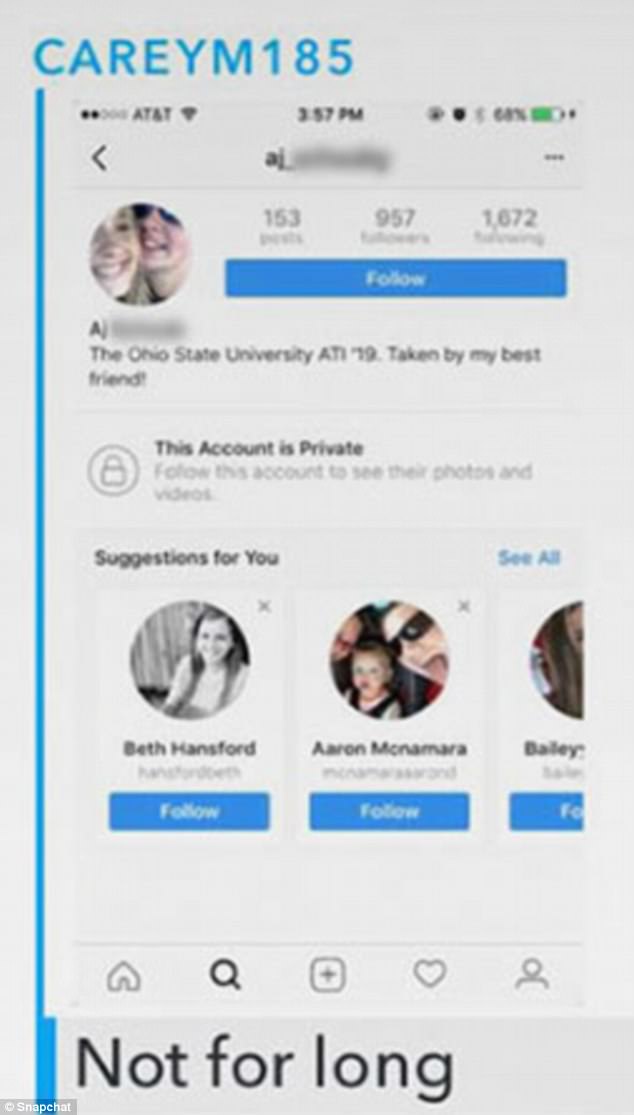 Heartbroken: Snapchatters shamelessly broadcasted his social media in the channel, poking fun at his loving comments towards his girlfriend that he was attempting to cheat on

Not my AJ! Some students started a hashtag that resembled the Not My President movement

He avoids her question and curtly requests she remain hush on the subject.

‘Don’t say anything. Don’t save the text please,’ he responded.

Unfortunately for him, she did just the opposite.

The replies in the Snapchat channel first rallied for the uploader to reveal his name – in defense of the other campus AJ’s being falsely scrutinized.

Several took to the chat section of the Snapchat channel to reveal the name.

‘They mark out the top name, but clearly AJ is chating. Every AJ is bouta get questioned,’ one user wrote.

‘As a member of the AJ community I demand that the original sender release the uncensored photo to clear out names,’ an AJ wrote.

Once AJ’s last name was revealed people had no mercy and quickly exposed his Instagram, Facebook, and pitied photos of AJ posing with his girlfriend. But one thing that the vicious responses had in common was the intolerance for cheating. 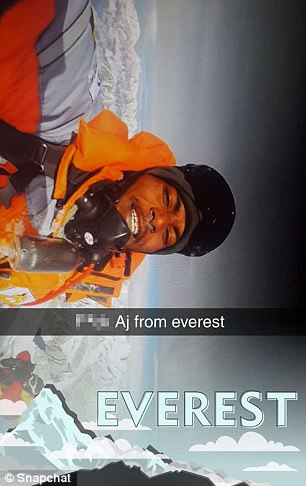 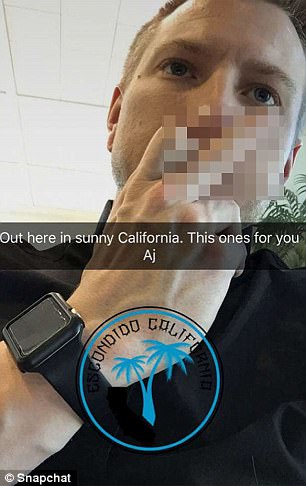 All around the world: Soon people from other countries began to join in on the fun following the ‘F**k AJ’ message and including their locations, revealing the post’s international reach 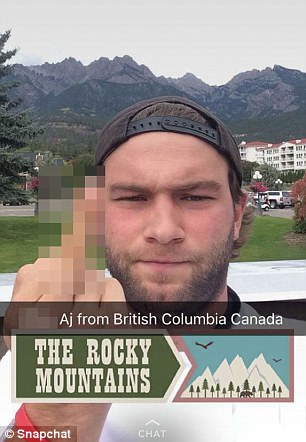 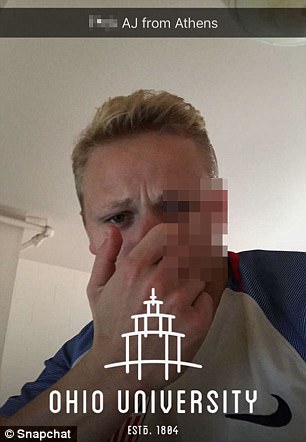 International shame: The diverse users hailed from Canada and Athens against the cheater 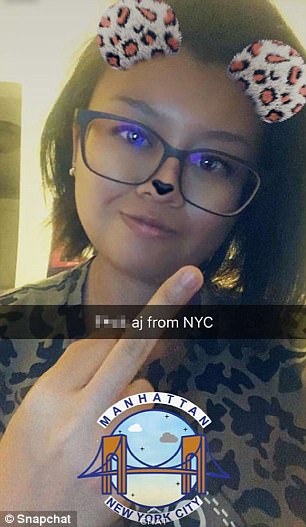 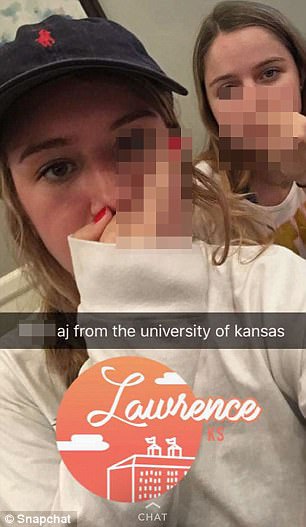 From coast to coast: Students from New York City and Kansas shared pity for girlfriend Allie and were vocal about their disgust with the publicized cheating 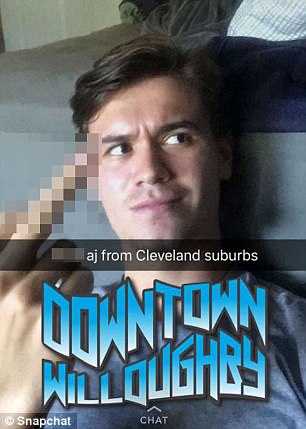 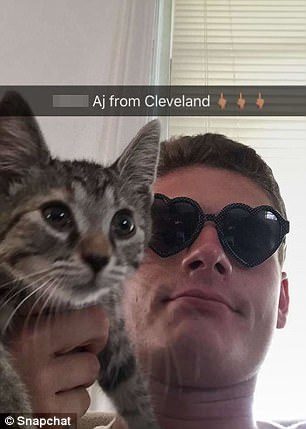 Join the club: The news spread through Ohio like wildfire with Cleveland suburbans joining in 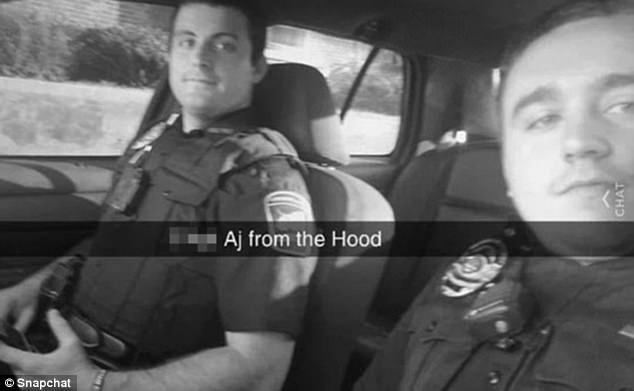 A federal offense: Even two police officers heard of the drama and shared their two cents

One user shared AJ’s Instagram account, which has the biography caption, ‘Taken by my best friend,’ and captioned his photo, ‘Not for long’.

Subsequent photos soon reamed on The Buckeye Snap channel with students and strangers in the area alike posting photos of themselves with the message ‘F**k AJ.’

One person even created a group chat and included AJ and his girlfriend into the conversation, with the user asking the real questions and kindly offering ‘group counseling’ advice.

Soon the trend became so big the original post was viewed over 20 thousand times in less than 12 hours. And responses began to pour in from all over campus and all over the globe as with anti-AJ comments in solidarity with girlfriend Allie. 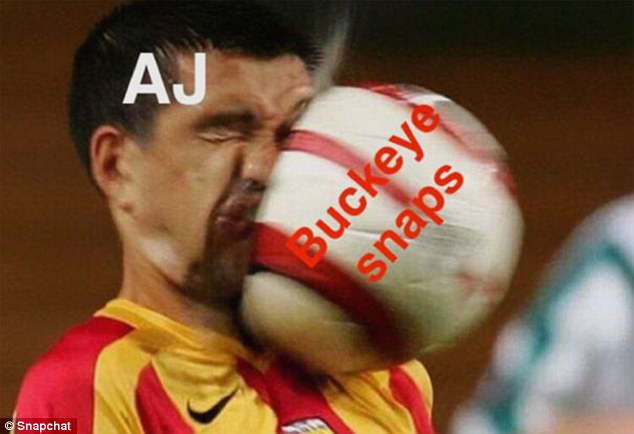 Smack! Memes were also popular in the Snapchat Buckeye channel, such as this one which compares the bombardment of messages against AJ to a face smack by a soccerball 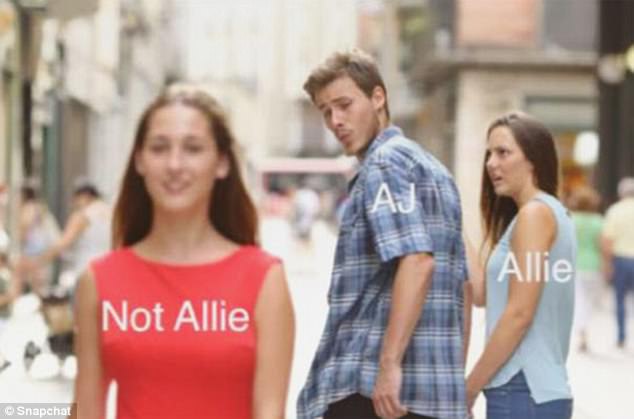 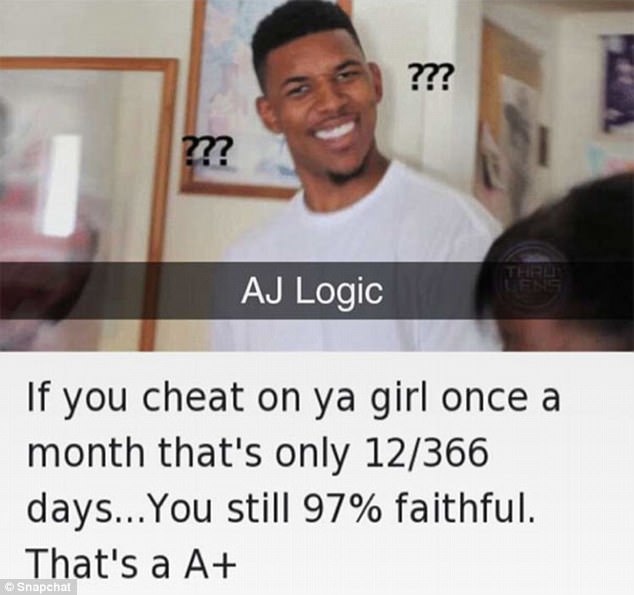 Dumb and dumber! Fans called AJ out for using Snapchat as his method of cheating, an extremely public platform where anyone can read one’s business 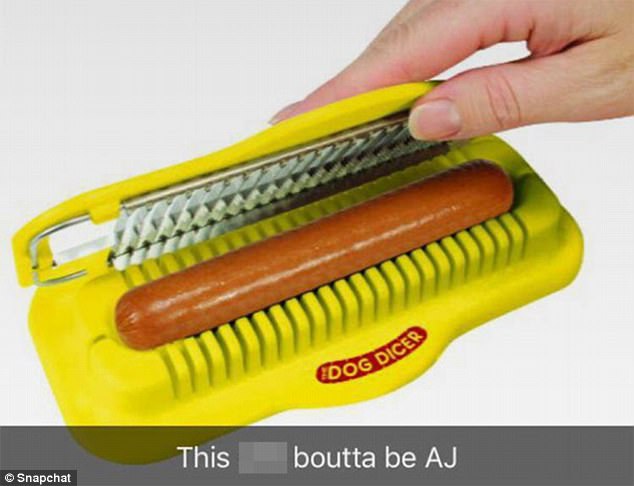 Painful truth! A funny fan posted this photo to illustrate the pain AJ when his girlfriend checks the Snapchat channel’s news 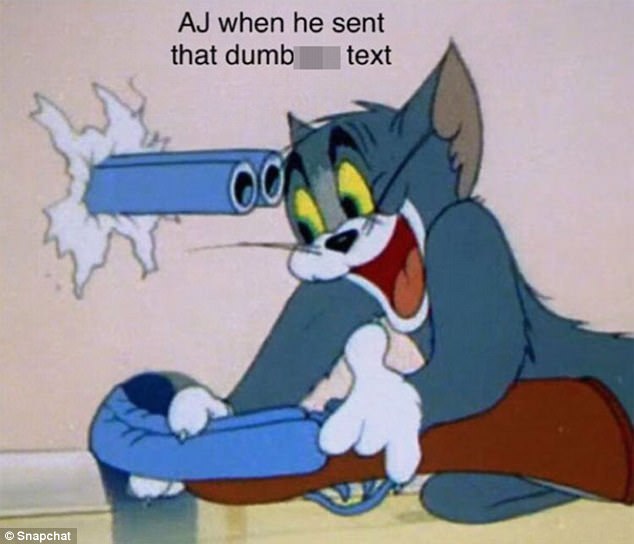 Not so smartypants: AJ’s sneaky Snapchat messages ended up shooting himself in the foot when they were released to the public, as illustrated by this meme

Even two police officers who kept up with the campus drama voiced their opinion and posted a selfie with the ‘F**k AJ’ message.

Memes also abounded as a result of the conversation, one of which compared AJ to a soccer player being smashed in the face by the ball.

Another meme displays a stock photo of man holding hands with his girlfriend while clearly looking lustfully over another woman walking by, while his girlfriend pouts, with the appropriate label of AJ over the man, Allie over the girlfriend and the funny phrase Not Allie n the other woman.

Other memes made fun at his futile attempts to cheat on Snapchat, a platform where it is fairly simple to save and share conversations. The meme ridiculed his sneaking logic with the caption: ‘If ya cheat on ya girl once this month that’s only 12/366 days…You still 97 per cent faithful. That’s a A+.’

While the news erupted on campus just yesterday, there’s no word if AJ and Allie have called it quits.  However even some fans of the drama had a hoot with the couple name, the same as the blonde singing sisters Aly and AJ Michalka who fittingly have a song entitled ‘Potential Breakup Song.’