What’s the beef? Ohio woman pleads guilty to hitting her ex-neighbor with a 10lb ground meat stick in the face after running into her in the chip aisle of a Walmart

An Ohio woman who hit her ex-neighbor with a 10lb ground meat stick in the chip aisle of a Walmart has pleaded guilty to disorderly conduct and been handed a suspended sentence.

The 27-year-old confronted Precious in the potato chip aisle and tried to spit on her and then threatened to hit the mom and child. Afterwards, she took a ground beef meat stick out of Jackson’s cart, whacking her in the face with it a ‘couple of times.’

On Tuesday, Garner pleaded no contest to disorderly conduct and was sentenced to a 30-day suspended jail term and a year of probation and got a $155 fine.

The 27-year-old had been initially charged with assault and violating a restraining order, according to police documents.

Previously, Jackson had got a restraining order against the suspect when she lived downstairs from her in a duplex.

Garner told police that she thought this order had expired, according to arrest records.

Chaos erupted at another Walmart in Ferguson in October, when up to 25 customers started fighting and setting off fire extinguishers in a rumpus which kicked off twice.

The brawls occurred shortly after a small incident which was handled internally without calling the police.

Footage filmed in the supermarket chain off West Florissant Avenue which is now viral shows huge numbers of people hitting, kicking and punching each other. 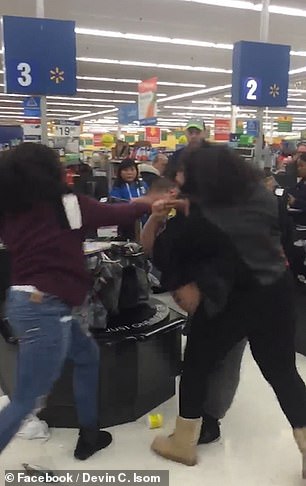 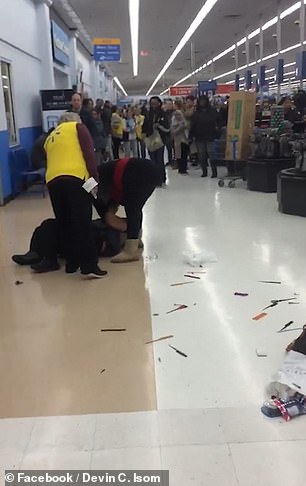 Footage filmed in the supermarket chain off West Florissant Avenue which is now viral shows huge numbers of people hitting, kicking and punching each other

Objects are thrown as scraps break out and some of those involved are seen hitting each other with heavy-looking objects.

Shouting and swearing is heard throughout the video as the violent brawls continue.

The clip ends with the groups of people running out of the store after the fights seemingly ended.