One in four new parents in England miss out on health visits from trained nurses and midwives because of funding cuts, experts warn

One in four new parents in England are missing out on vital health visits, damning statistics show.

Under the Government’s healthy child programme, families are supposed to receive five visits from a nurse or midwife between pregnancy and their child turning two-and-a-half.

But a quarter of parents are not seen when their baby turns one, according to Public Health England (PHE) data. A 12-month check-up is part of the programme.

And more than a third of new mothers do not receive a visit before they give birth, the NSPCC has revealed. Parents are also entitled to an antenatal appointment.

One in four new parents in England are missing out on health visits, statistics show (stock)

‘But with a decline in staff numbers and rising family caseloads, they are working under significant pressure.

‘[This will] ensure any mental health problems they might be experiencing are picked up on as early as possible so they can be signposted for more specialist support.’

In England, new parents are entitled to an antenatal health visit, a new baby review, a six-to-eight week assessment, a one year check-up and a final review at two to two-and-a-half years old.

These are carried out by a health visitor, who is a trained nurse or midwife.

PHE data for 2017/18 show just 77 per cent of children received a 12-month review before they turned one, the BBC reported. This is compared to 75 per cent the year before.

The statistics also reveal families in London had just one or two visits over the 12 months.

On the back of this, the NSPCC sent out freedom of information requests to 149 local authorities, of which 32 responded.

This suggested around 38 per cent of families who were eligible for antenatal visits did not receive them.

One in five mothers and one in 10 fathers battle mental-health problems during pregnancy or after birth, according to the NSPCC.

The charity claims health visitors are well placed to pick up on warning signs, such as persistent sadness, struggling to bond with the baby and suicidal thoughts.

Since 2015, the number of health visitors employed by the NHS has fallen by around a quarter, according to the NSPCC.

Almost half of the remaining staff have caseloads of more than 400 children, the charity added.

The Institute of Health Visiting recommends a maximum of one health visitor to every 250 children to ensure a safe service.

Local authorities became responsible for paying for health visiting services, rather than the NHS, in 2015.

The NSPCC has called England’s programme ‘limited’, with parents in Scotland being offered 11 visits, Wales nine and Northern Ireland seven.

It is launching a Fight For A Fair Start campaign to ensure all parents receive at least five visits by the same healthcare worker.

Dr Cheryll Adams, executive director of the Institute of Health Visiting, claims it is important new parents see the same visitor each time because it encourages them to open up.

The Health and Social Care committee is also calling on the Government to increase the number of visits new parents receive.

A new mother who suffered from panic attacks while pregnant claims she did not see a health visitor until after she gave birth.

Kirsty Harvey, of York, welcomed her daughter Molly 10 weeks ago.

She claims she asked for support while pregnant but only saw a health visitor after Molly was born. 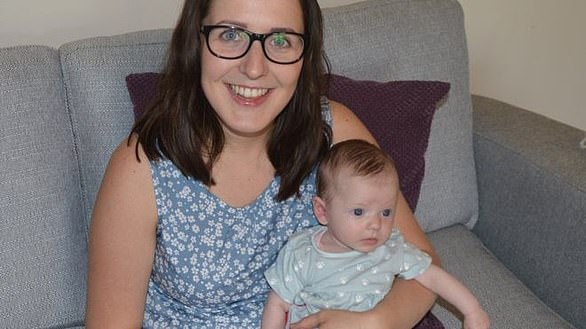 Kirsty Harvey suffered panic attacks while pregnant with her 10-week-old daughter Molly (pictured together). She claims that despite asking for support, she did not see a health visitor until after she gave birth. She has since seen six different midwives

‘There’s not much focus on you as a mum.

Ms Harvey believes seeing the same visitor, who knew her struggles, would have helped.