ONS: Food ate up a hefty slice of household budgets during Covid

The average UK household spent 14.4 per cent of outgoings on food and non-alcoholic drinks in the year to April 2021, up from 10.8 per cent in the previous year, fresh data reveals.

Office for National Statistics figures show the lowest earning 20 per cent of households spent 18.3 per cent of their total expenditure on food and non-alcoholic drinks during the period, up from 14.7 per cent the year before.

Sarah Coles, a senior personal finance analyst at Hargreaves Lansdown, said the data shows ‘food was already consuming a much bigger slice of our budgets, before the horror of food inflation kicked in’.

Spending: The percentage of spend on food and non-alcoholic drinks for the average UK household was 14.4% in the year to April 2021, the ONS said today

The average household spent £39.71 per person per week on food and drink in the year to April 2021, the ONS added.

Ms Coles said: ‘In the year to April 2021, when CPI inflation was up just 1.5 per cent, we spent an average of over 14 per cent of our incomes on food – and those on lower incomes spent over 18 per cent.

‘In both cases, this is higher than at any stage since the financial crisis in 2008. Some of this was due to pandemic trends, but it demonstrates how exposed we were when prices started shooting up.

‘The proportion of our budgets spent on food owed a great deal to the restrictions that still applied elsewhere in 2020/21, which meant it overtook transport and recreation and culture, becoming our second biggest expense after energy.

‘Some of the extra spending may have been to make up for what we were missing out on – which may be why sugar sales rose almost 24 per cent, alcohol over 20 per cent and confectionary almost 18 per cent.’ 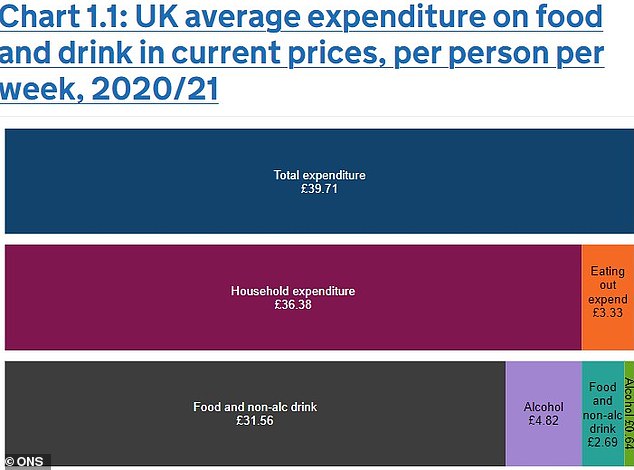 Habits: UK average expenditure on food and drink in the year to April 2021 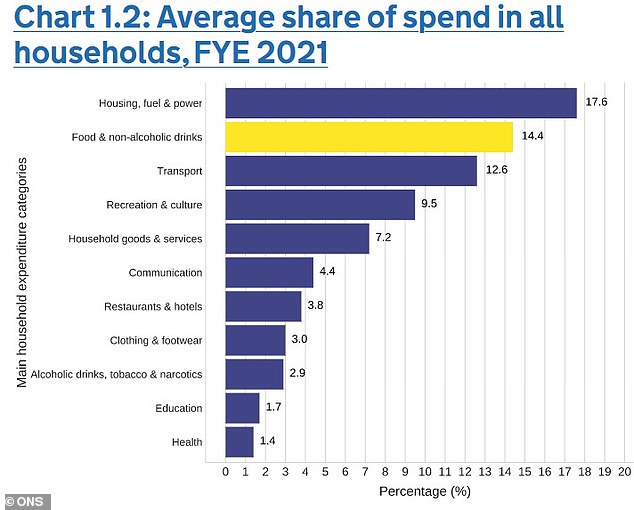 Variations: Average share of spend in all households in 2021, according to the ONS 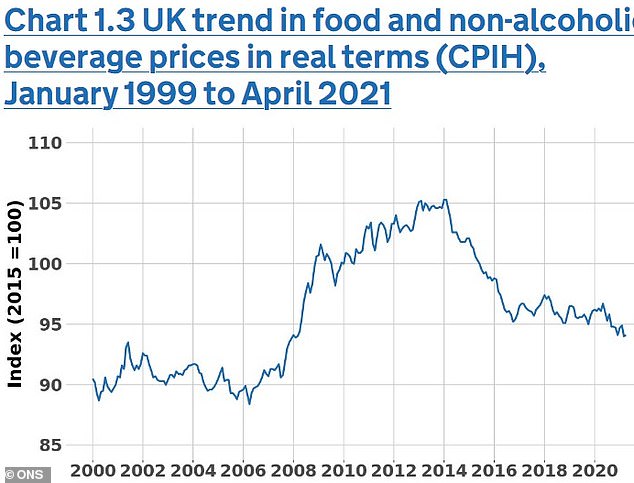 Comparisons: Average food and non-alcoholic drink prices in the UK since 1999

Last month, figures from the ONS revealed food price inflation hit 16.2 per cent in the year to October, up from 14.5 per cent in September. The cost of basics like milk, cheese and eggs have been surging in recent months.

As well as having to contend with food prices rising at their fastest pace for 45 years, households have also be grappling with higher energy and fuel costs.

In November, the ONS said higher prices were hitting poorer households hardest, as they spent around half of their income on food and energy, compared to about a third for those on middle incomes.

Ms Coles said: ‘Assuming food and drink was still making up a larger proportion of household spending when inflation started to rocket, it would leave an awful lot of people vulnerable.

‘Those on lower incomes in particular, who were spending almost a fifth of their income on food during the pandemic, are likely to have wrestled with price rises which have seen them go up over 16 per cent in the year to October.

‘It’s one reason why 41 per cent of people say they are cutting back on essentials, including food, in order to make ends meet – and why this rises to 58 per cent among those in the fifth most deprived areas.

‘It’s also why the Trussell Trust says it distributed 1.3million food parcels to people facing hardship between April and September – this up 52 per cent from the same period in 2019.’