The Open University sparked new fears for its future yesterday as it warned its deficit is set to swell to £30million.

The figures emerged after a turbulent period for the OU, marked by the resignation of its vice-chancellor Peter Horrocks in April.

This followed staff opposition to his plans to cut courses and jobs as part of a £100million savings drive.

Mr Horrocks had also angered employees by saying academics ‘get away with not teaching’ and describing cuts as ‘reprioritising’. He later apologised and a £30million savings programme was subsequently approved.

The worrying financial forecast marks another blow for the institution, traditionally seen as the ‘University of the Second Chance’.

In its latest accounts, the OU posted a deficit after taxation of £17.9 million in 2017-18 compared with a £9.8million surplus in the previous academic year.

When one-off costs – including millions for ‘restructuring and strategic change’ – were excluded, the university claimed its deficit last year stood at just £5.2million.

However, it told Times Higher Education (THE) that it had ‘a projected operating deficit of around £30million’ for the current academic year.

The university ‘remains in a strong financial position with substantial reserves which were deliberately built up … to give the university some protection ahead of uncertain fluctuations in student numbers and to help us invest in change to increase efficiency and support student success’, they added. 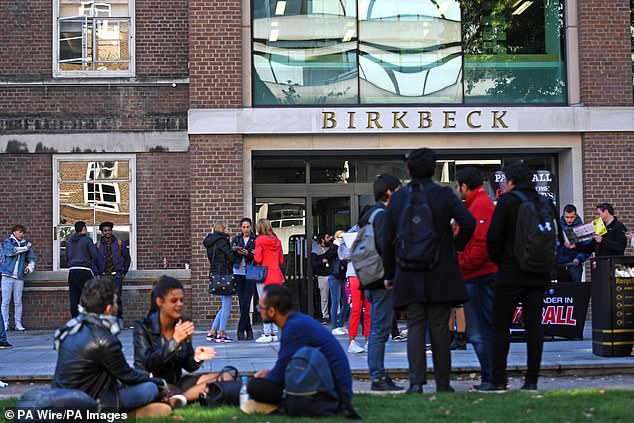 Birkbeck, University of London, which specialises in evening courses, has also returned an underlying deficit of £518,000 (file picture)

In April, experts called for ministers to give the OU a subsidy to enable it to lower its fees. An OU degree typically costs about £18,000 over six years, compared with more than £27,000 over three years for most full-time courses.

The revelations come as another major provider of similar courses admits it has also started losing cash, raising more doubts over the long-term sustainability of part-time higher education.

Birkbeck, University of London, which specialises in evening courses, has returned an underlying deficit of £518,000. This was the first time it has failed to return a surplus in a decade, according to THE.

A third of new undergraduate enrolments in 2017-18 were classed as part-time.

The weakened finances of the UK’s leading part-time education providers are likely to strengthen calls for England’s post-18 education review to recommend policies to protect this area when it reports in early 2019.

Birkbeck told THE it has a ‘strong balance sheet based on a decade of recurrent structural surpluses, [which] given the decline in part-time and mature students … is testimony to our institutional agility and resilience’.