Robo-dog! Paralysed former canine crime fighter Vinnie is given a new lease of life as he is fitted with a set of WHEELS

A retired police dog left partially paralysed from a debilitating medical condition has been given a new lease of life after being fitted with a set of wheels.

Vinnie, a seven-year-old German shepherd, served the police with distinction for five years before a spinal cord disease led to the paralysis of his hind legs.

He has now been given a specialist dog wheelchair that acts as his rear legs.

The harness enables him to run, fetch sticks and chase squirrels like any other dog.

Vinnie, a seven-year-old partially paralysed German shepherd, has been given a new lease of life as he has been fitted with a specialist dog wheelchair

He has been welcomed into a loving family home who have nursed him while his health worsened after he was forced to retire two years ago.

Vinnie served with Dorset Police from 2013 to 2018 with his handler PC Brendan Trent.

The 90-pound dog patrolled the streets to help keep the peace in Bournemouth town centre on Friday and Saturday nights, diffusing potentially violent situations before they escalated. 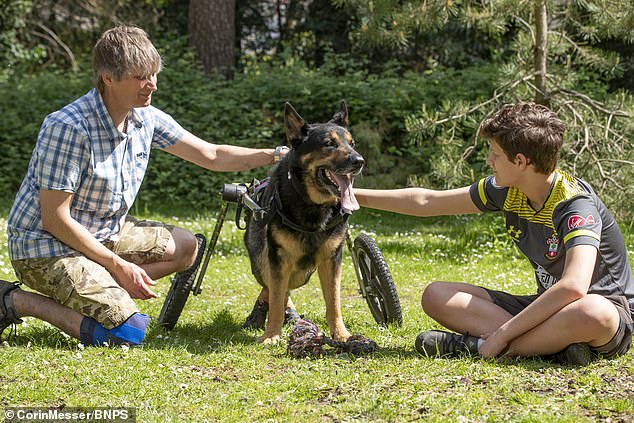 He has been welcomed into a loving family home with Dave Harfield, 48, and his wife Cath and two children James and Lizzie 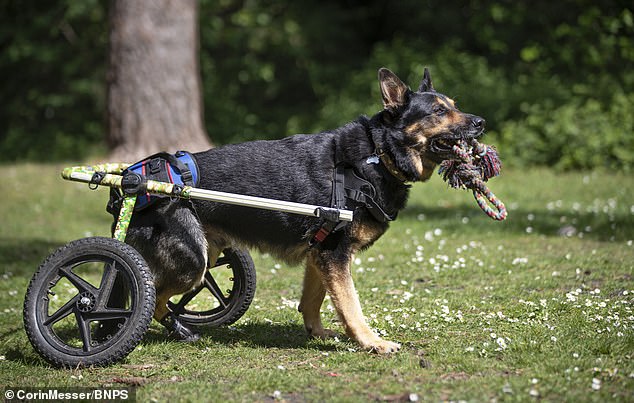 Vinnie was also deployed at AFC Bournemouth football matches and helped in missing person searches before being diagnosed with Degenerative Myelopathy, a progressive disease which has no cure.

Owner Dave Harfield, 48, a digital analyst from Poole, has spent over £500 on getting him a wheelchair to transform his ‘quality of life’.

He looks after Vinnie with his wife Cath, a mental health nurse, and their two children, James, 15, and Lizzie, 12. 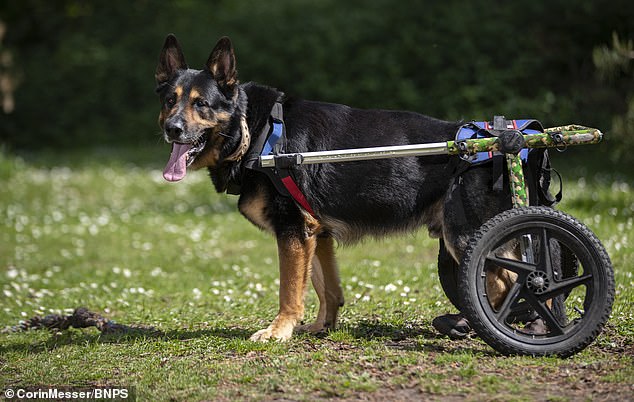 He was diagnosed with Degenerative Myelopathy, a progressive disease which has no cure

Mr Harfield said: ‘Vinnie served his community of Dorset for five hard-working years but unfortunately a medical condition forced him to retire.

‘Unfortunately, when police dogs retire the force can no longer support them financially.

‘We adopted Vinnie as a family pet in October 2018 and have done everything we can to keep his health and quality of life at optimum levels. 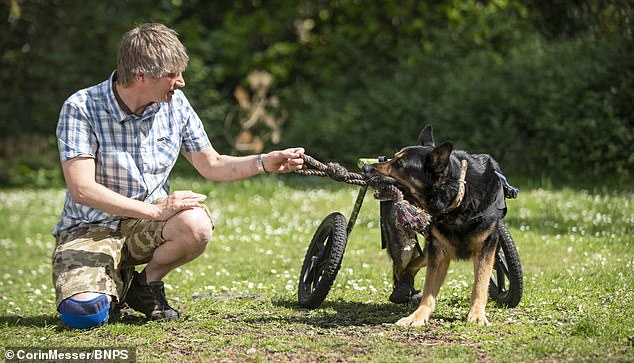 Mr Harfield has been supported financially by Pawsome Pensions, a new charity which helps pay the vet bills for retired police and fire dogs

‘Sadly, there is no cure for Degenerative Myleopathy. It’s all about delaying the onset and while the treatments we have pursued have helped Vinnie greatly, he recently reached a point where his lack of mobility was beginning to affect his quality of life.

‘Despite his difficulties in moving around, Vinnie remains full of life and all the drive, determination and spirit of a working police dog is still there.

‘So at the start of the year we decided to buy him a specialist dog wheelchair. 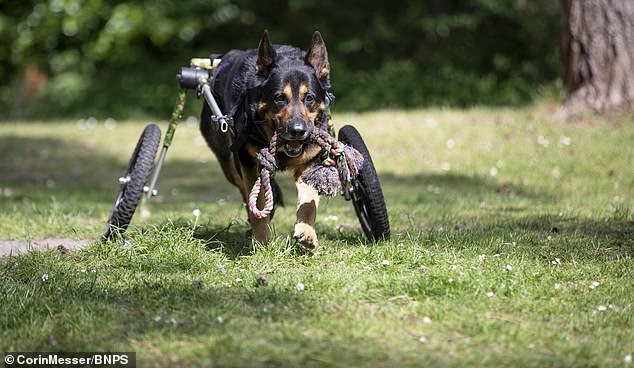 The harness enables Vinnie to run, fetch sticks and chase squirrels like any other dog 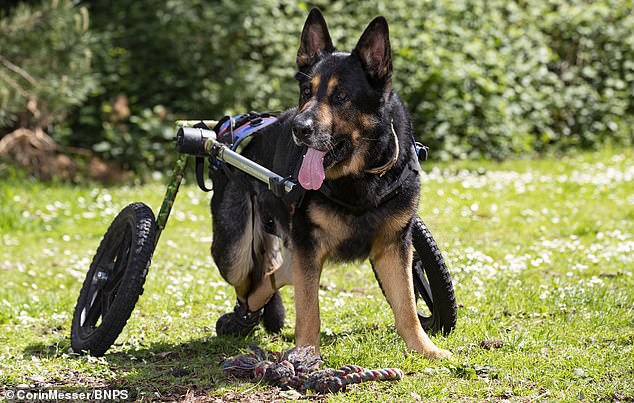 ‘It’s made a huge difference and it’s been quite emotional watching him enjoying all the things he used to love like running on the beach, fetching sticks and even chasing the odd squirrel.’

Dave has been supported financially by Pawsome Pensions, a new charity which helps pay the vet bills for retired police and fire dogs.

They look after 30 old service dogs.

Charity founder Vikki Ritchie said: ‘The family took Vinnie on knowing he will have ongoing medical issues, which is such a wonderful thing to do.’