She’s had quite the busy September, having already stormed the runways for top designers across the world, during fashion weeks in New York, London and Milan.

And Kaia Gerber continued to wow on her final stop for the Spring/Summer ’19 season on Sunday evening, as she took to the catwalk for Valentino’s highly-anticipated Paris Fashion Week presentation.

The 17-year-old daughter of Cindy Crawford caught the eye in a billowing multicoloured dress, which featured bold patterning, a high neckline and full sleeves.

Wow: Kaia Gerber was the centre of attention as she stormed the runway for Valentino’s Paris Fashion Week show on Sunday

She added to her head-turning look with a palette of bold makeup that included glittering green eye makeup, while her chestnut brown tresses were worn in a straight style with a centre parting.

While her dress — which boasted such colours as red, blue, green, purple and yellow — was enough to catch the attention of well-heel guests seated in the front row, she added some extra sparkle with large gold hoop earrings.

Kaia, whose 19-year-old brother Presley Gerber also works as a model, has had her famous supermodel mother Cindy, 52, by her side throughout her time in the City of Light. 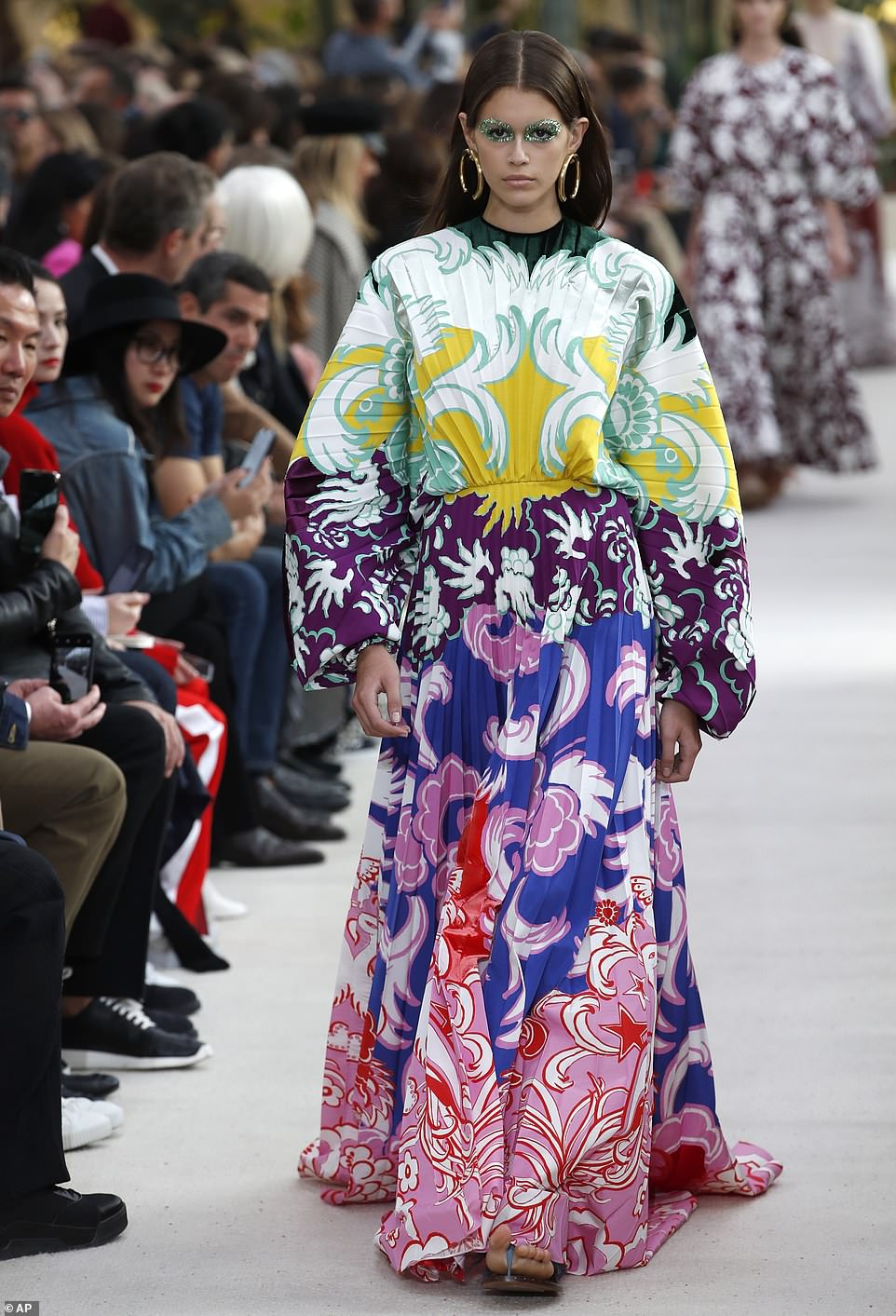 Dress: She caught the eye in a billowing multicoloured dress, which featured bold patterning, a high neckline and full sleeves 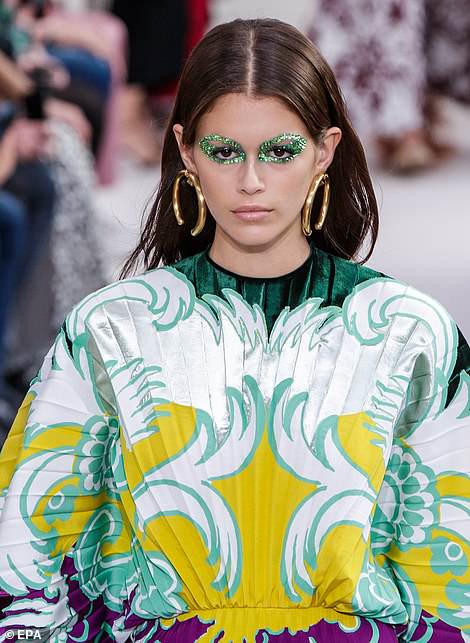 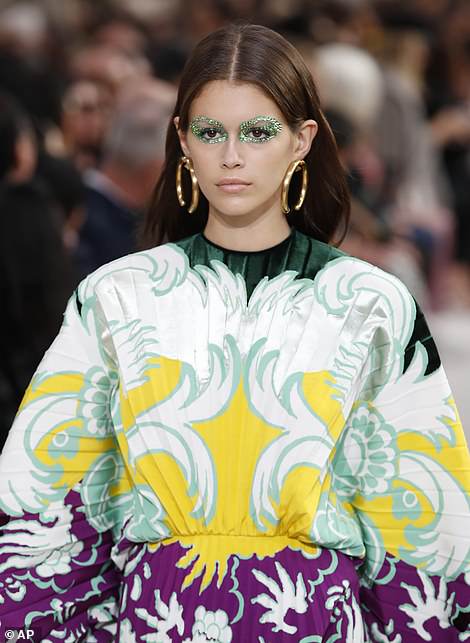 All that glitters: She added to her head-turning look with a palette of bold makeup that included glittering green eye makeup 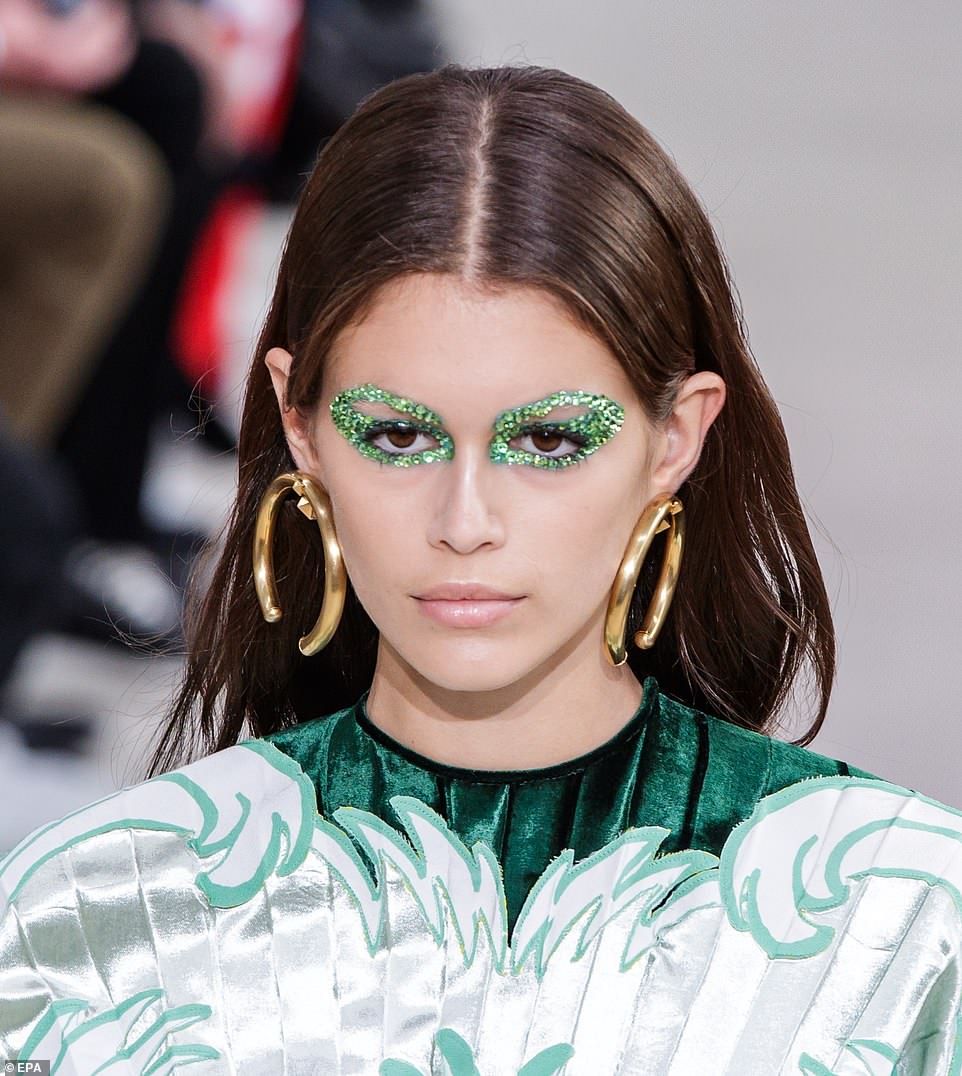 Tress-ed to impress: The teen supermodel’s chestnut brown tresses were worn in a straight, glossy style with a centre parting 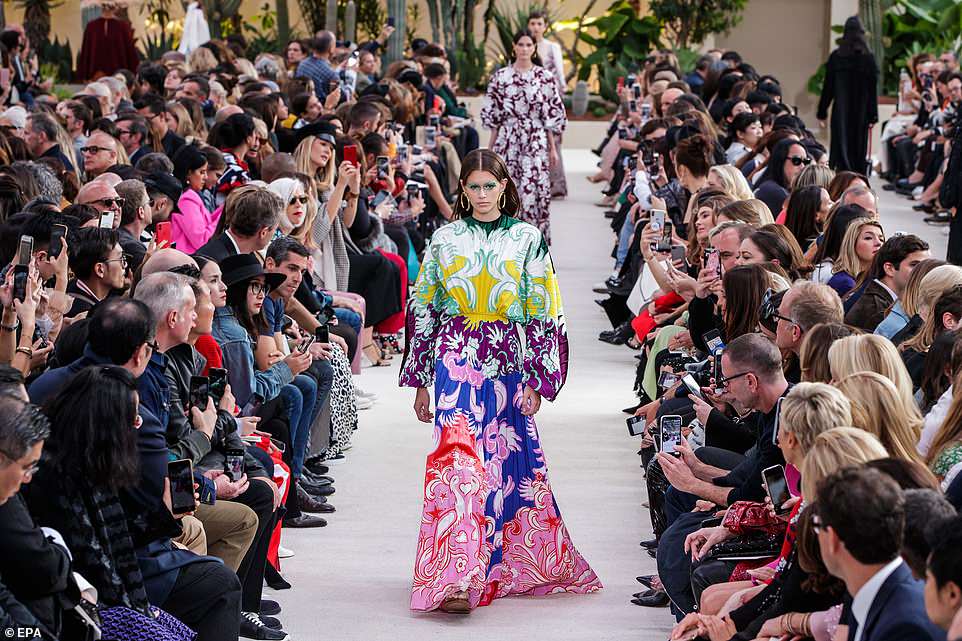 Enjoying the view: Several well-heeled gusts on the front row were seen capturing images of the gowns on their smartphones

And the veteran catwalk beauty has been proving just how effortlessly she can still command attention, as she’s stepped out in style at a host of events and hot-ticket fashion presentations.

Cindy has enjoyed an enduring career, after she was signed to Elite Models aged 17, going on to become one of the elite batch of 1990s supermodels.

The mother-of-two confessed retirement wasn’t on her mind after walking away from the modelling industry in 2000 and returning to the scene just eleven years later in 2011.

Stepping out in fine style: Model Izabel Goulart was among the guests on hand to attend the hot-ticket fashion presentation 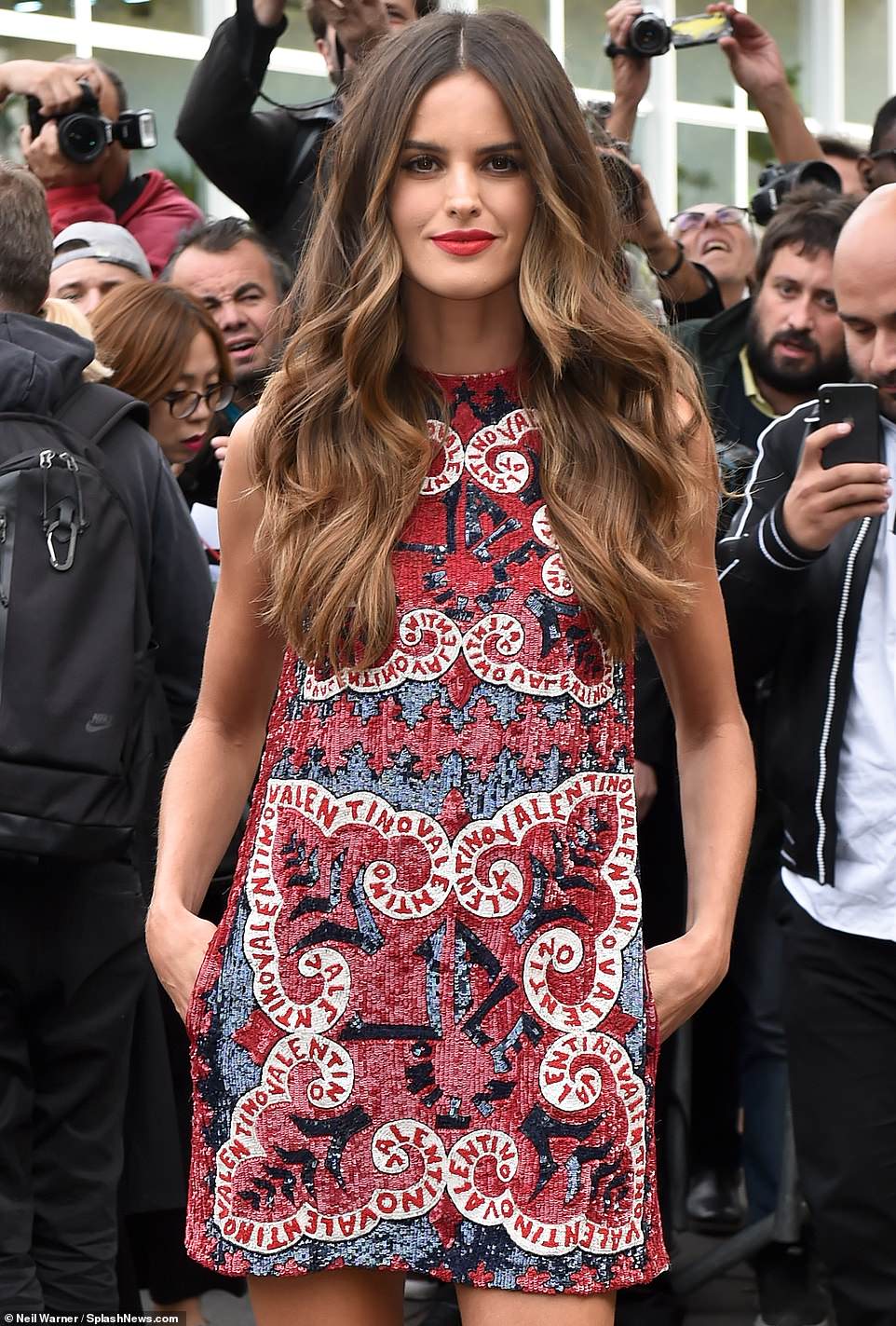 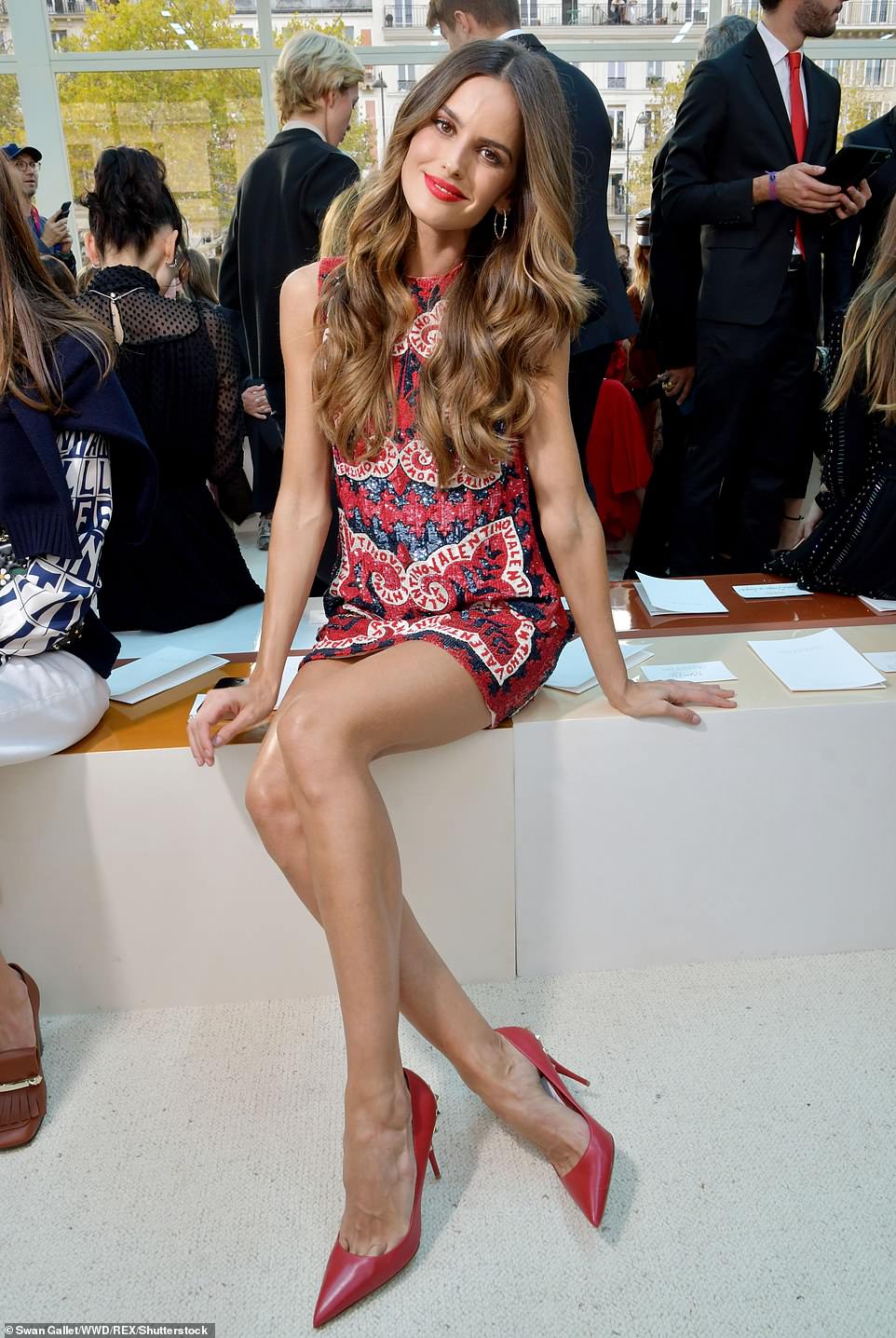 She explained to DailyMailTV: ‘I think it depends on what I’m doing. To me, if I’m getting my picture taken, it’s modelling, even if it’s for my own brand.’

After cementing her legacy in the fashion industry, Cindy is enjoying watching the meteoric rise of her teenage daughter Kaia.

Since making her runway debut back in September 2017 for Calvin Klein when she was just 16, Kaia has since walked for various brands including iconic fashion house, Chanel. 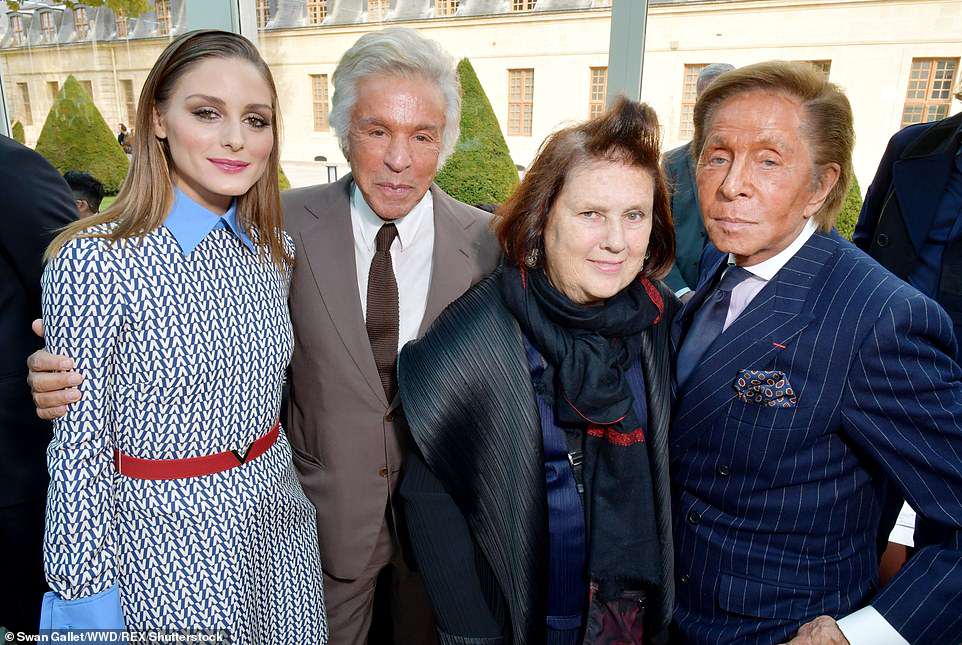 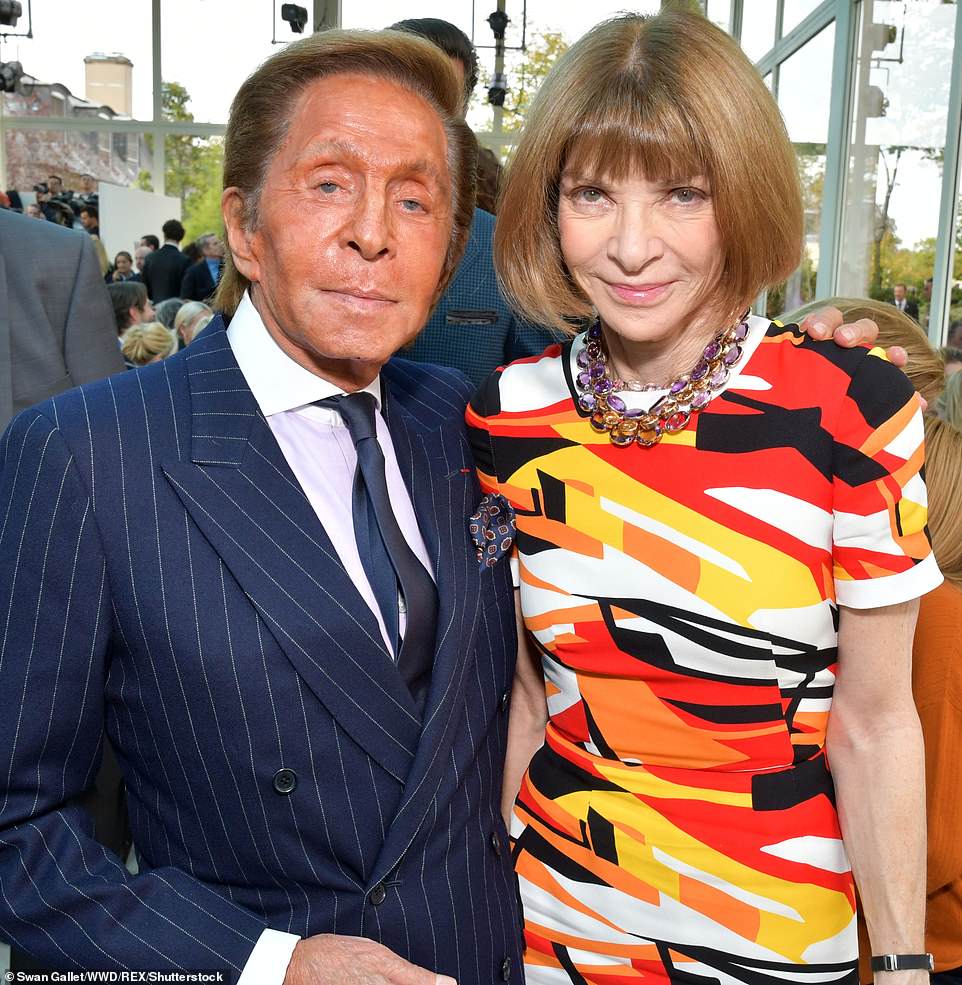 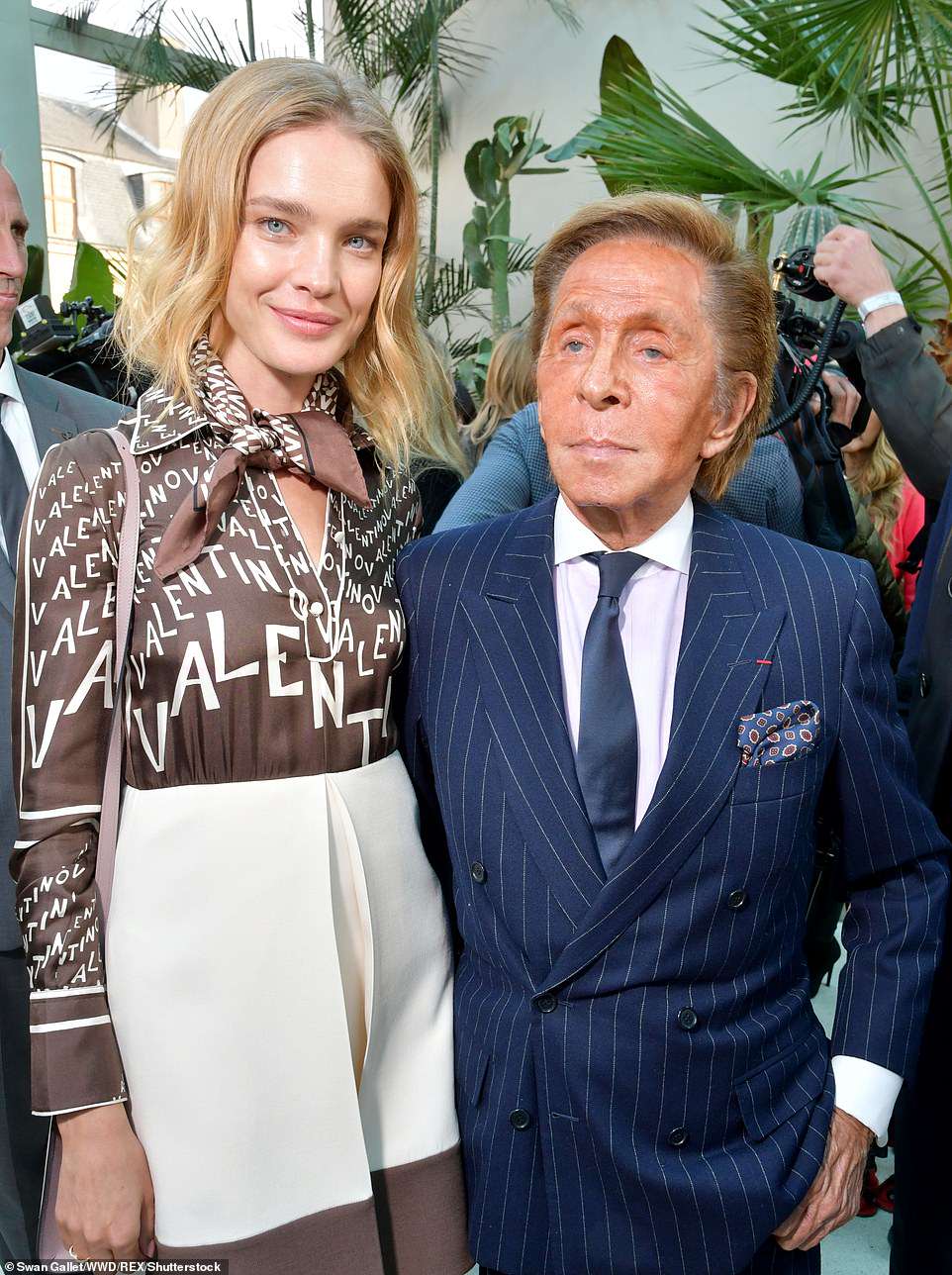 Discussing how she juggles life as a student and international model, Kaia told Harper’s Bazaar in January: ‘I usually use the afternoon to catch up on homework.

‘I’m completing my diploma at Malibu High through an online program, and it’s difficult to get much done during the week, as the Wi-Fi on planes is really annoying.

‘My favourite class this year is AP Calculus because I just like math. It’s definitely super hard to teach yourself derivatives, though!’ 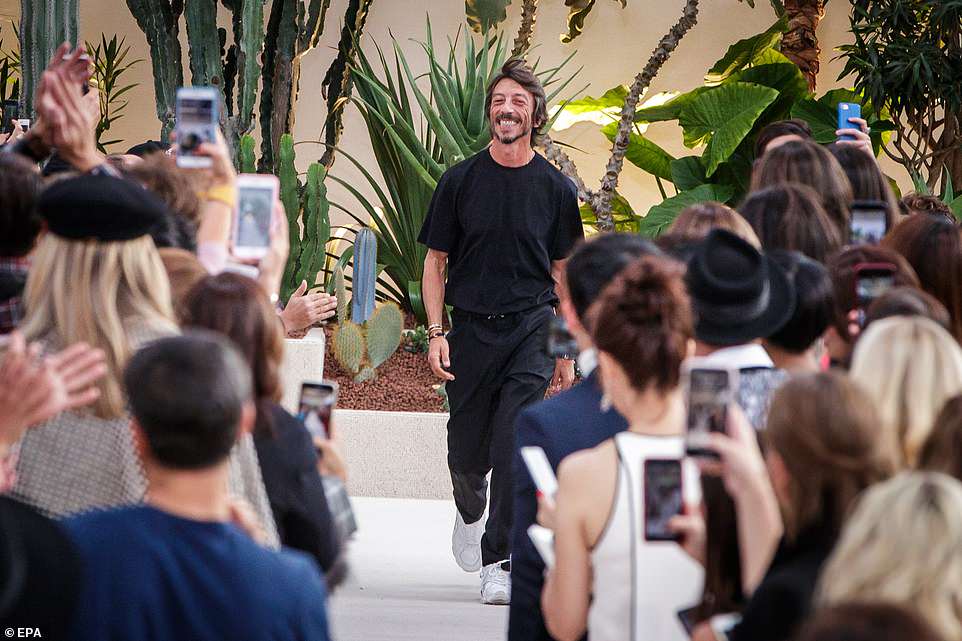 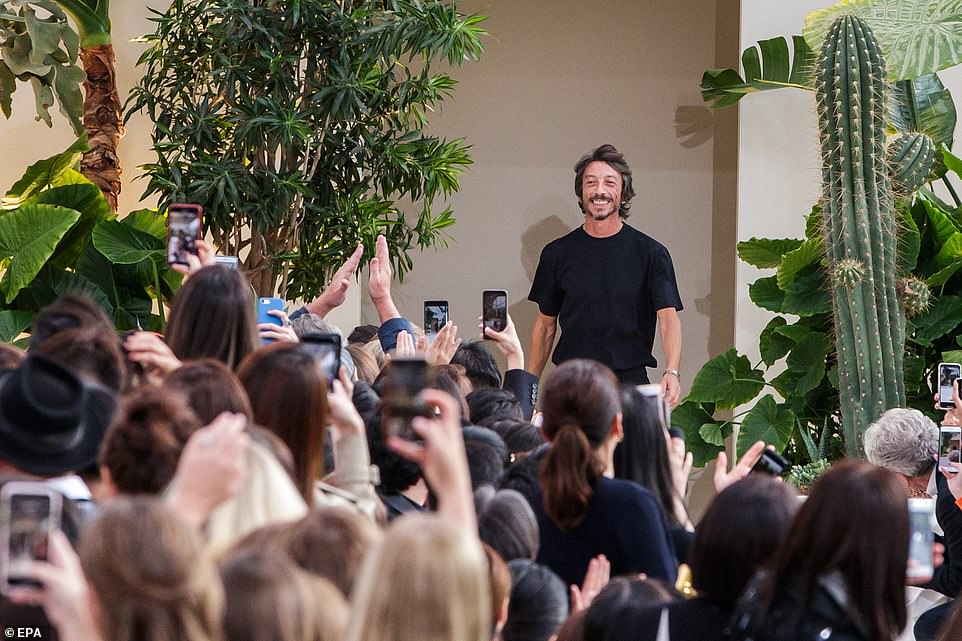