Students at Marjory Stoneman Douglas High School have been filling their mandated clear backpacks with everything from signs, memes, condoms, and even live fish while comically trolling the officials who implemented the new safety measure.

In the wake of the mass shooting that killed 17 people, the teenage survivors at the high school in Parkland, Florida, returned from spring break on Monday with the requirement in full effect. However, students have made their displeasure crystal clear.

Just one day after the new rule was implemented, an Instagram account featuring photos of the students’ best ‘clear backpack clapbacks’ was created to show off their peaceful acts of defiance while highlighting the absurdity of the mandate. 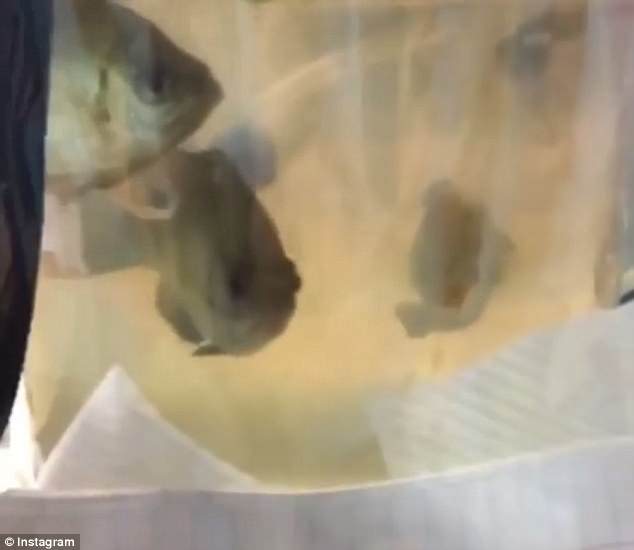 Trolling: A video of live fish swimming around in his bookbag was shared on a new Instagram account that features pictures of the students’ best ‘clear backpack clapbacks’

Student Zack Walls brilliantly turned his clear backpack into an aquarium, and a video of live fish swimming around in his bookbag while he was in class was shared on the account.

In the comments section of the post, the high school senior insisted that ‘no fish were harmed in the making,’ explaining that he put them back in the canal near his home after he returned from school.

Two teens filled their clear bookbags with rubber ducks. One has a sign that says, ‘This Ducks,’ while the other reads, ‘This Is Ducking Stupid.’ 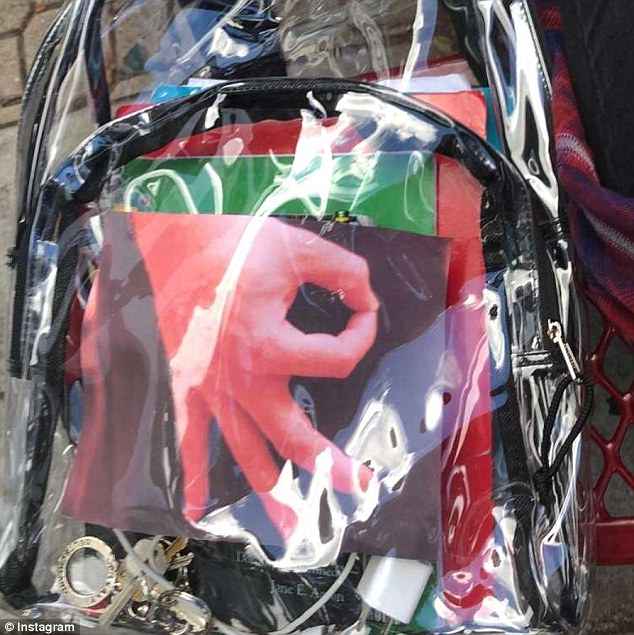 Stating their case: Students have been filling their clear backpacks with comical signs and memes to peacefully protest the new safety precaution, which went into effect on Monday 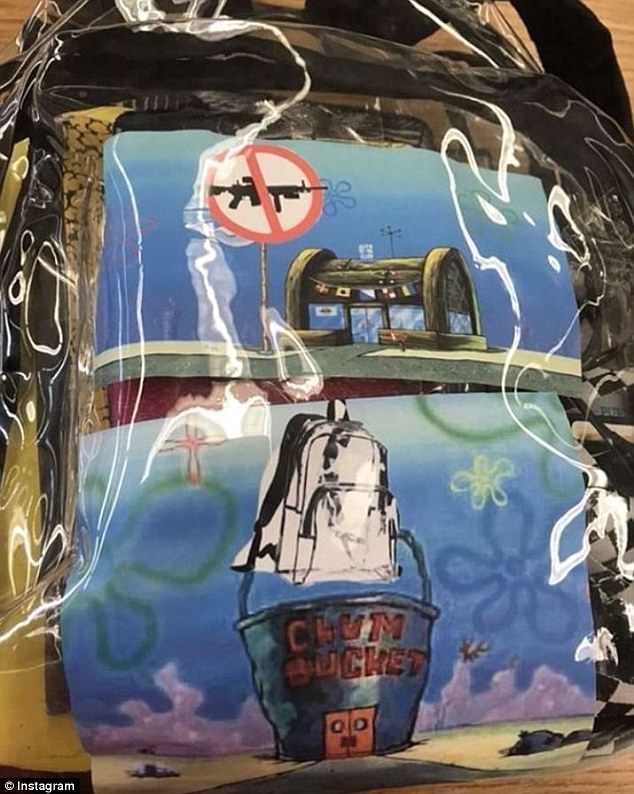 Creative: One student did a little photo editing to create an image of a clear backpack being tossed into the Chum Bucket, a restaurant in restaurant in SpongeBob SquarePants 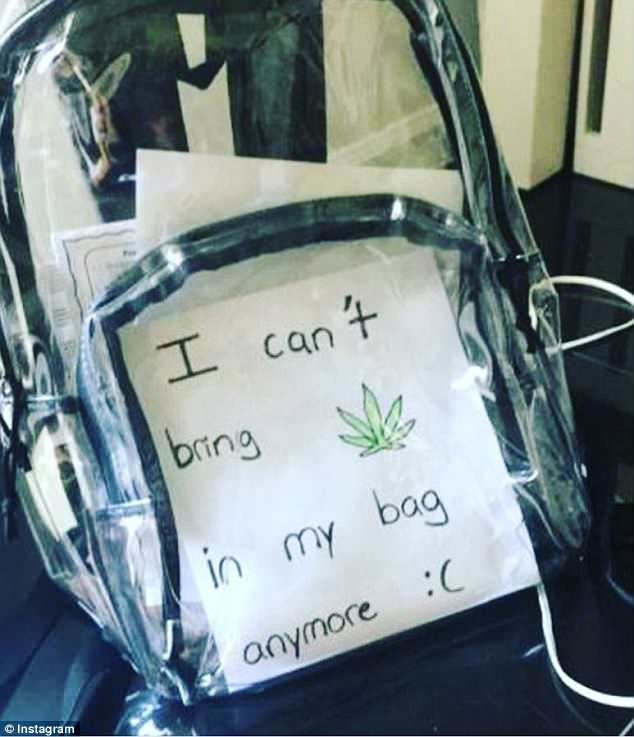 Keeping it real: Another teen joked about no longer being able to bring marijuana to school

And in a nod to full transparency, one student’s backpack features a drawing of a marijuana leaf and says, ‘I can’t bring [marijuana] in my bag anymore.’

Meanwhile, another person wrote ‘Crisis Actor #420’ on her backpack to mock the conspiracy theory that was spread online to undermine the students who are advocating for stricter gun control.

Many students have argued that the clear backpacks are an invasion of privacy, and one person filled a bookbag with a bra, menstrual pads, packs of ramen noodles, and condoms.

Another teen decorated his backpack with a sign that says ‘Prisoner I.D. #0605105866’ and a piece of notebook paper that has ‘Look what’s in my bag!’ written on it.

The Instagram account, which has more than 4,600 followers, was created by A.J. Cardenas, a freshman at Florida International University who is friends with students at Marjory Stoneman Douglas. 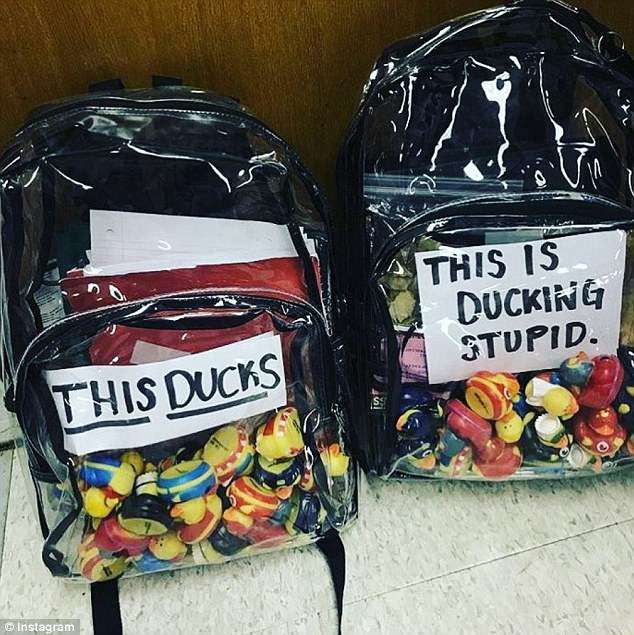 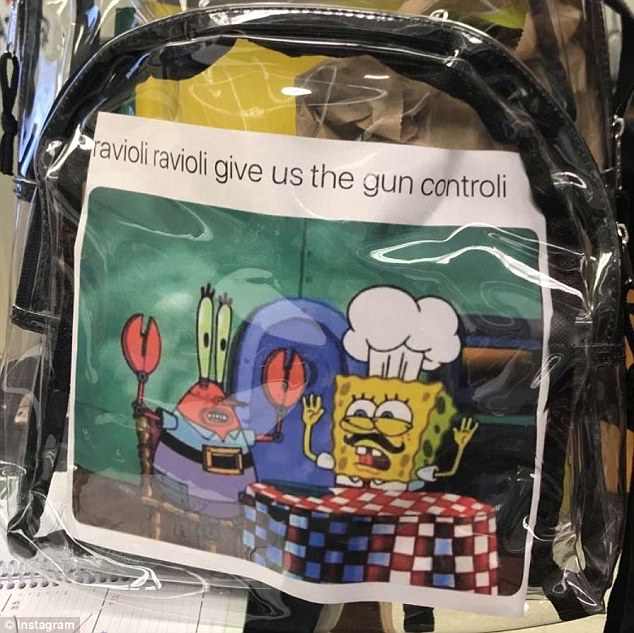 Hitting back: A backpack featuring a SpongeBob SquarePants meme had ‘ravioli ravioli, give us the gun controli’ written on top 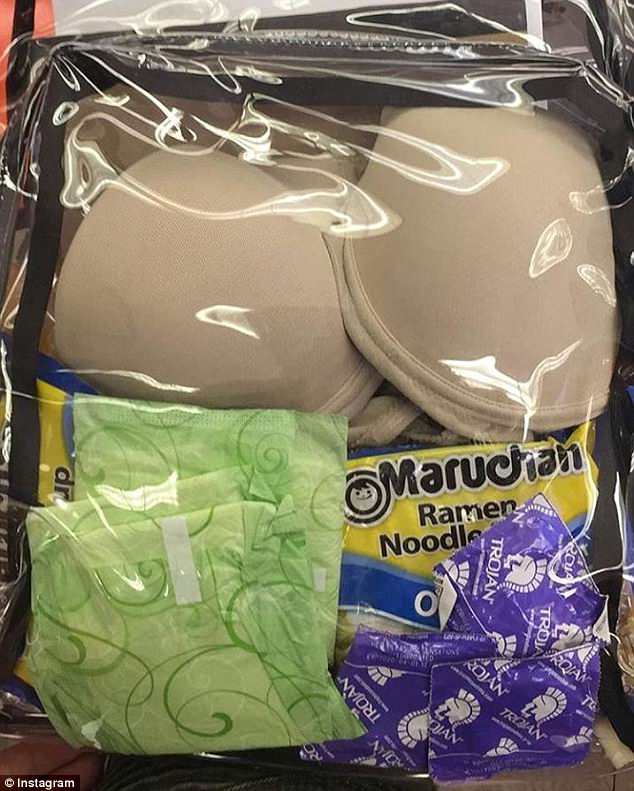 Nothing to hide: One person filled a bookbag with a bra, menstrual pads, packs of ramen noodles, and condoms 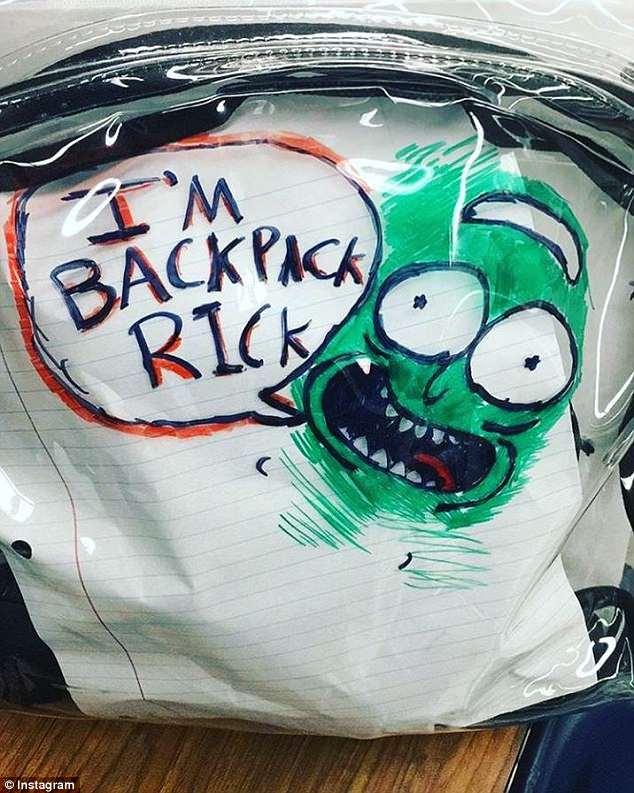 ‘I’m backpack Rick’: Another student paid homage to the cartoon Rick and Morty

‘Of course we’re taking shots at it, making jokes, and all that, because we can’t really take clear bookbags seriously,’ he told New Times.

Like many of the school’s students, he called the clear backpacks a ‘band-aid’ instead of a real solution to the problem.

‘I guess that’s just one of the characteristics of students: We can add a little bit of snarky humor to all of this, but the message is “Listen, let’s get real,”‘ he added.

The 17-year-old junior at Marjory Stoneman Douglas took to Twitter on Tuesday to share a photo of himself holding up a clear backpack filled with tampons, using the hashtag #MSDStrong. 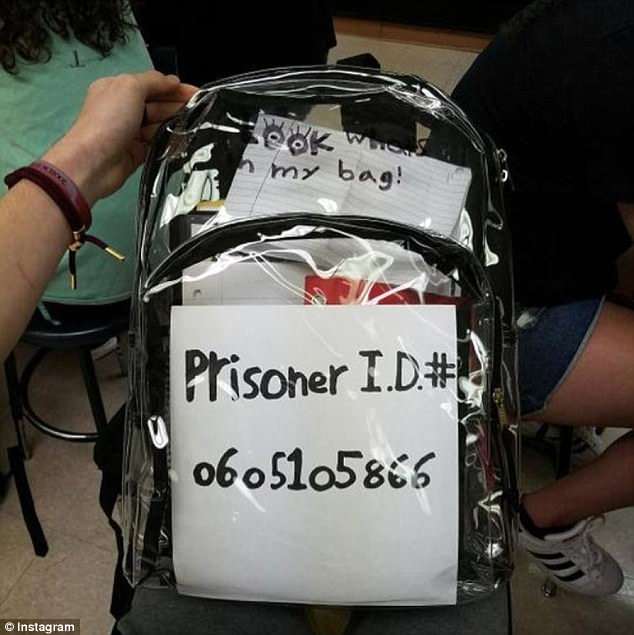 Their feelings: One teen decorated a backpack with a sign that says ‘Prisoner I.D. #0605105866’ and a piece of notebook paper that has ‘Look what’s in my bag!’ 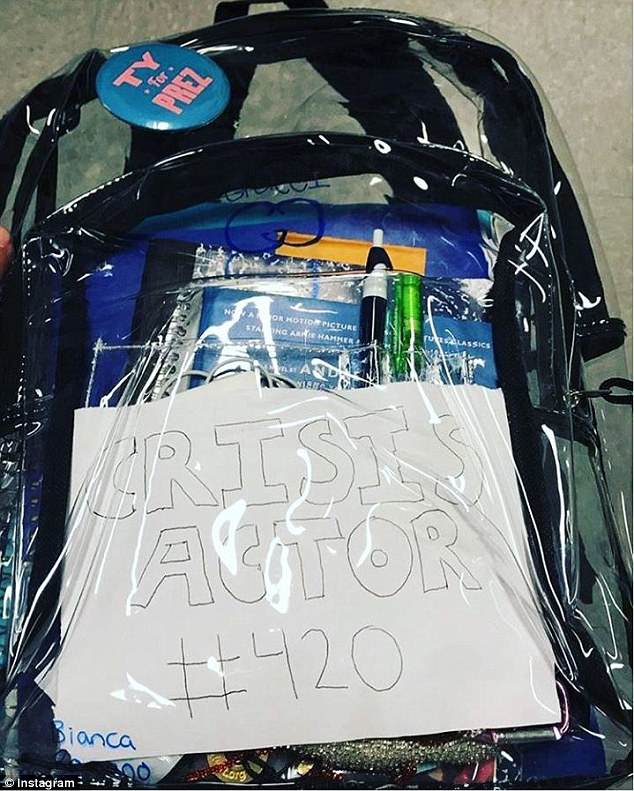 Take that: Someone else mocked a conspiracy theory that was spread online to undermine the students who are advocating for stricter gun control 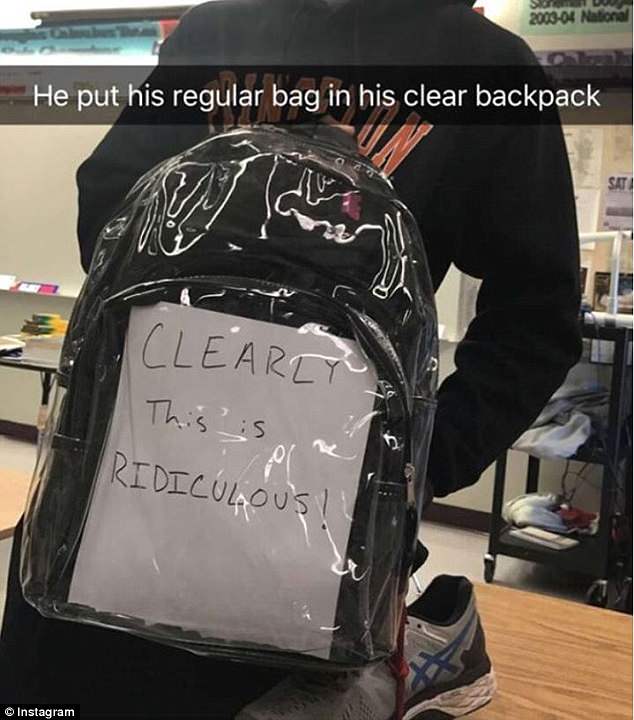 Clapback: One student put his regular backpack in his clear backpack with the sign: ‘Clearly this is ridiculous!’ 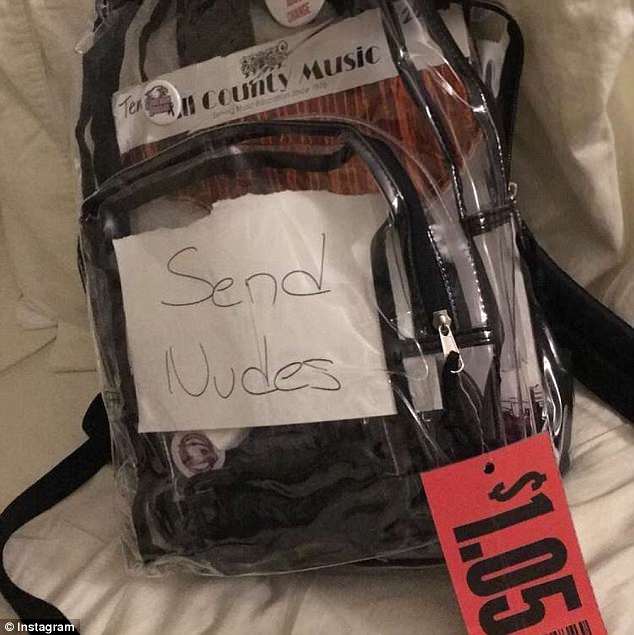 Message: One person just scrawled ‘Send Nudes’ on a piece a paper and stuck it in a backpack

In a follow-up tweet, the activist explained that he has been ‘learning new things about women’s health’ — including the cost of tampons and menstrual pads.

‘To those with questions about my tampon backpack- I only got lights,’ he tweeted. ‘I didn’t know. Getting supers for tomorrow.

‘Sizes, pricing… I’m learning new things about women’s health right now,’ he continued. ‘This stuff is expensive. Steps must be taken to make these health products easier to access.’

Florida is among the states that have officially excluded menstrual products from its sales tax in the last year, but Kasky’s post proves that there is still a long way to go when it comes to ensuring women have access to these necessary products.

His tweet has struck a chord with those who feel uncomfortable having their tampons and menstrual pads visible to their peers.

Sarah Stricker, a 14-year-old freshman at Marjory Stoneman Douglas High School, praised Kasky in the comments section, writing: ‘Yass Cameron if only I had the confidence to do that.’ 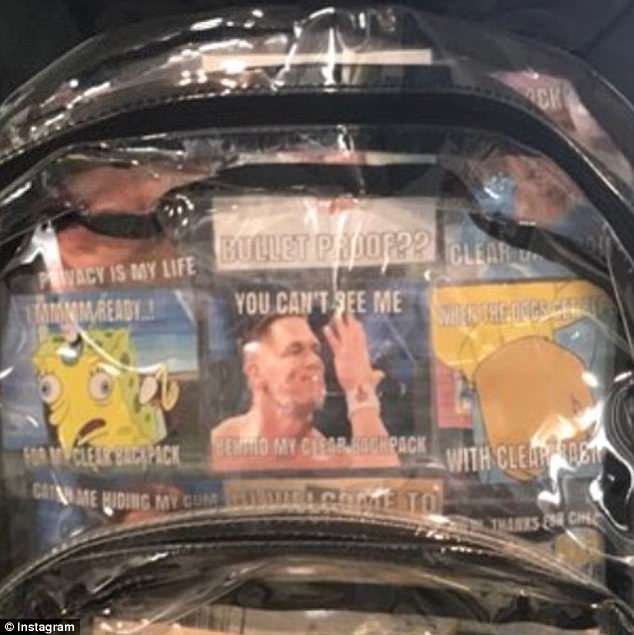 Try to see through that: One backpack was lined with memes to cover its contents 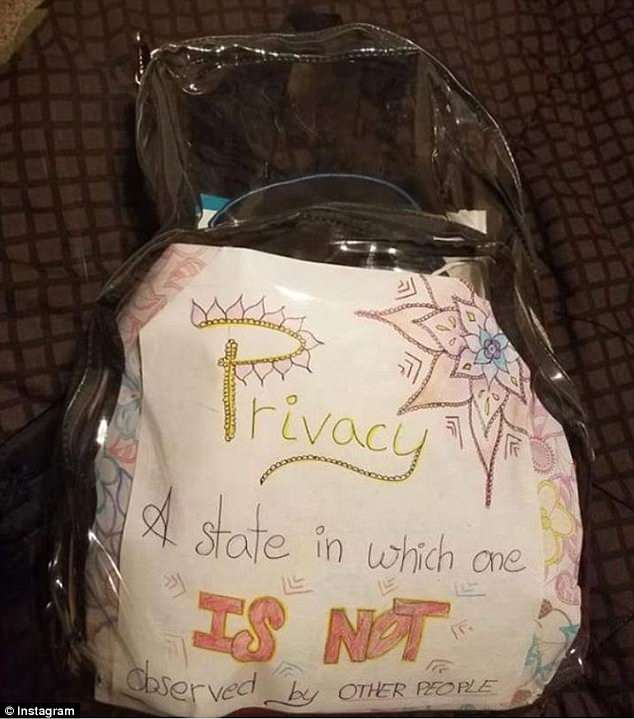 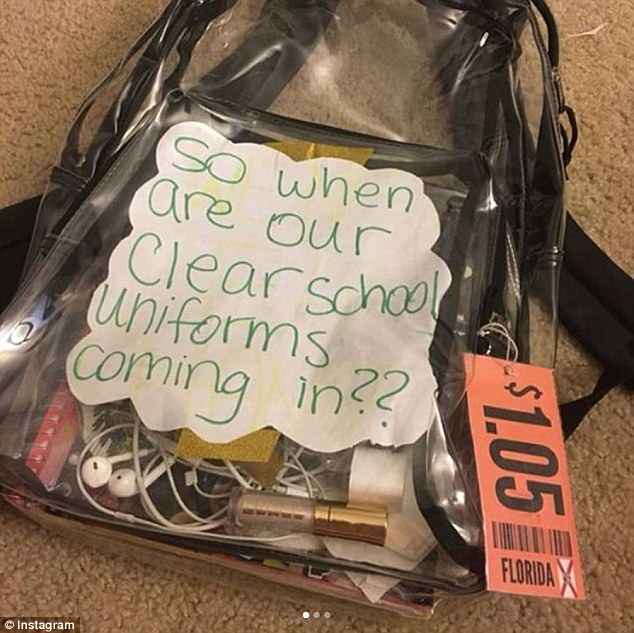 What’s next? One person questioned when their ‘clear school uniforms’ were going to come in 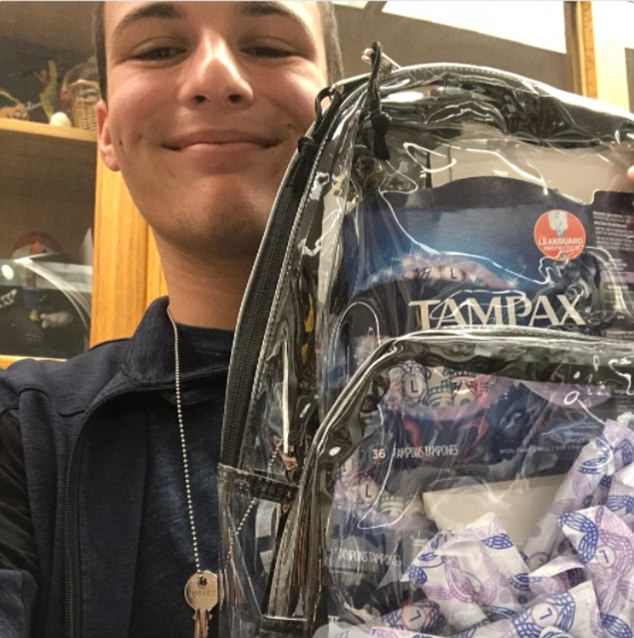 Making a statement: Parkland student and March for Our Lives co-founder Cameron Kasky tweeted a photo of himself holding up a clear backpack filled with tampons on Tuesday 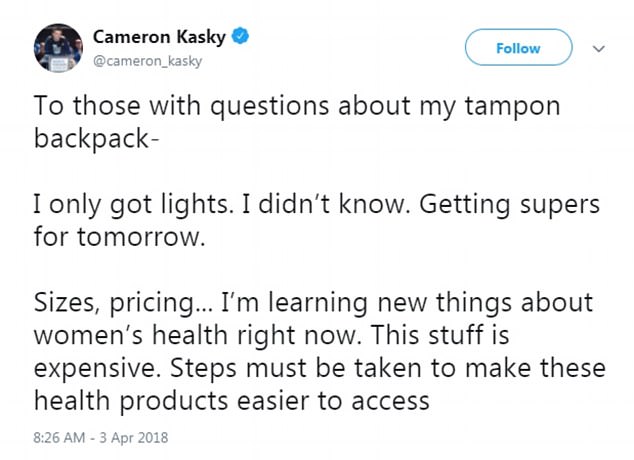 Expensive: In a follow-up tweet, the 17-year-old activist explained that he has been ‘learning new things about women’s health’ — including the cost of tampons and menstrual pads

Support system: Kasky responded that he is there for her if she needs anything

He’s a catch: Caryn Turrel pointed out that Kasky is ‘already miles ahead of the curve’

‘Here for you if you need anything… tampons and beyond,’ he responded.

Twitter user @sprklplnti admitted that she was moved by Kasky’s post because she would have been mortified if she had to carry her tampons in a clear backpack when she was a student.

‘I know it’s silly but this kinda made me tear up a little!’ she wrote. I would have been horrified to be forced to carry my tampons in a clear bag in HS.

‘This is solidarity in a sweet way. It’s just a tampon. Not something to be ashamed of, like a MAGA hat or something.’

The post has received more than 61,000 ‘likes’ and 9,000 retweets since it was posted, including retweets from fellow Parkland students Emma González and Sarah Chadwick. 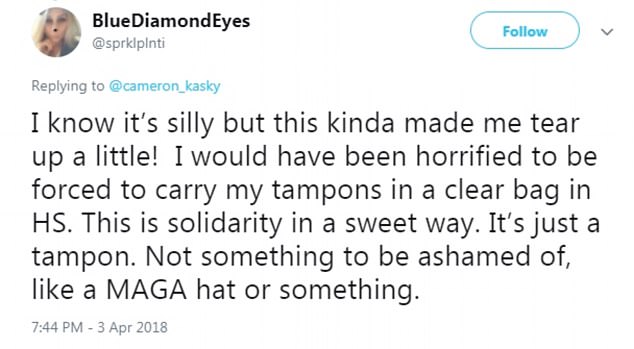 Tearing up: Twitter user @sprklplnti admitted that she was moved by Kasky’s post because she would have been mortified if she had to carry her tampons in a clear backpack 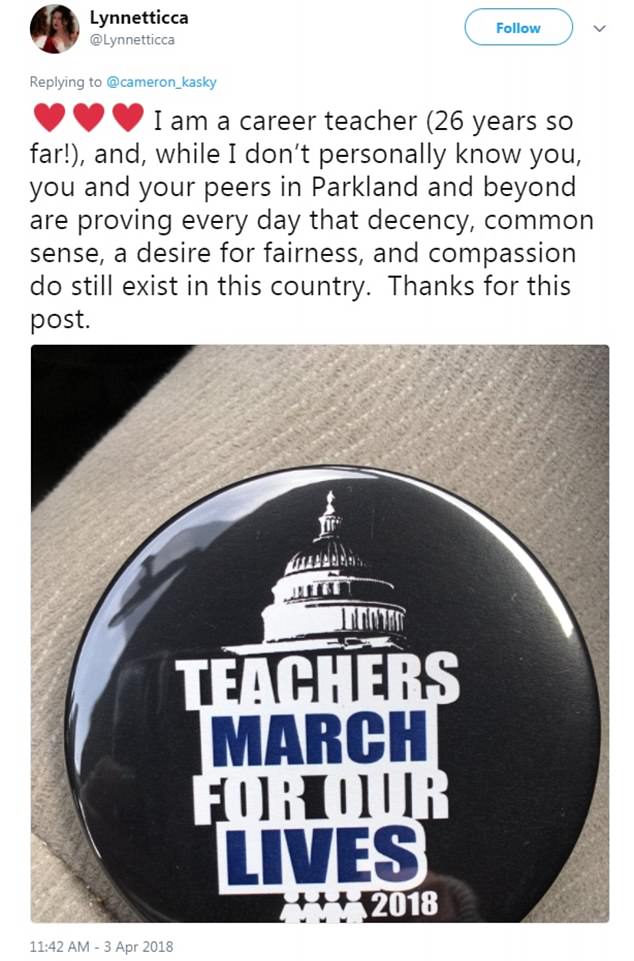 Proud: A longtime teacher thanked Kasky for the post, noting that he and his peers prove that compassion still exists in this country 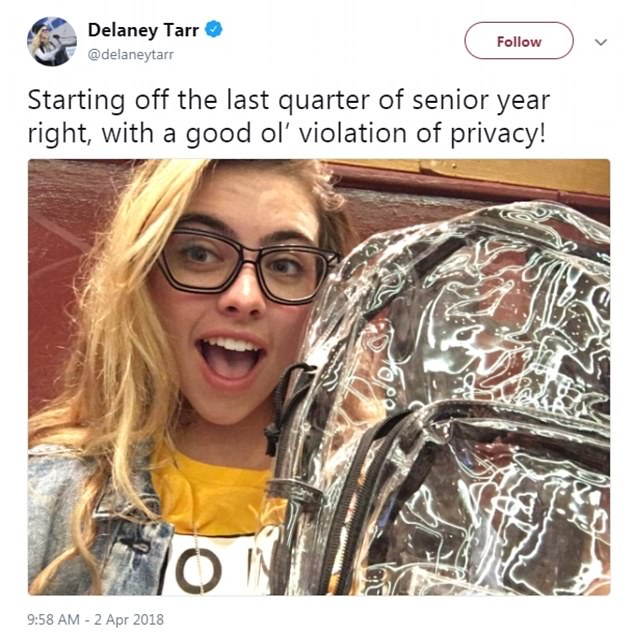 Violation of privacy: Parkland student Delaney Tarr is among those who are adamantly against the new safety measure, but Kasky’s post has helped her see the silver lining

Parkland student Delaney Tarr is among those who are adamantly against the new safety measure, but Kasky’s post has helped her see the silver lining.

‘The only positive about these backpacks is that maybe, hopefully, the stigma around periods will be removed. Also, that Cameron now know how expensive tampons are,’ she wrote.

To show the student body’s outrage over the new clear backpacks, Tarr created a Twitter poll, which asked: ‘Alright, so let’s clear this up. How many of you (specifically Douglas students) think that clear backpacks are a good solution?’

Displeasure: Tarr set up a Twitter poll that revealed 89 per cent of respondents thought the clear backpacks were not a good solution 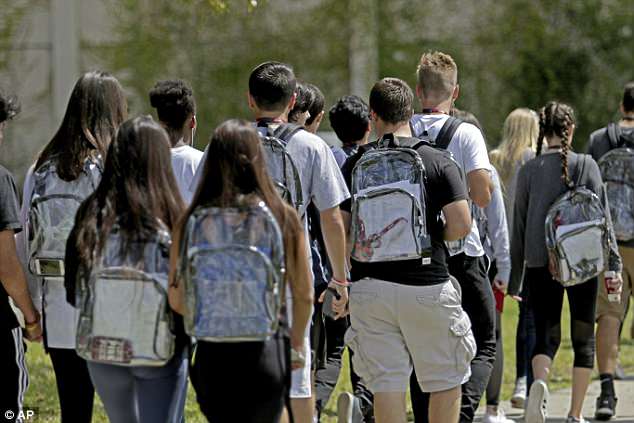 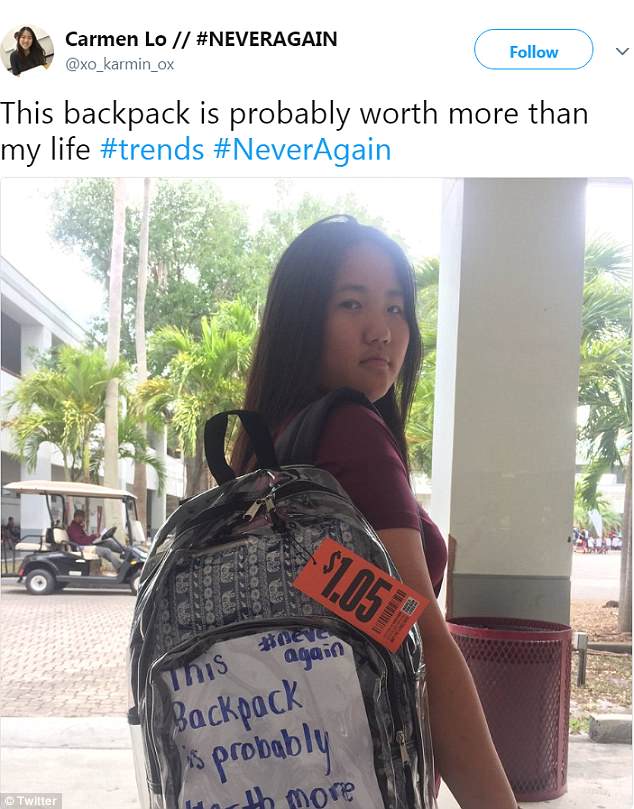 Making a statement: Many students at Marjory Stoneman Douglas High School took to Twitter to express their frustrations and protest what they’re calling a ‘band-aid’ security measure 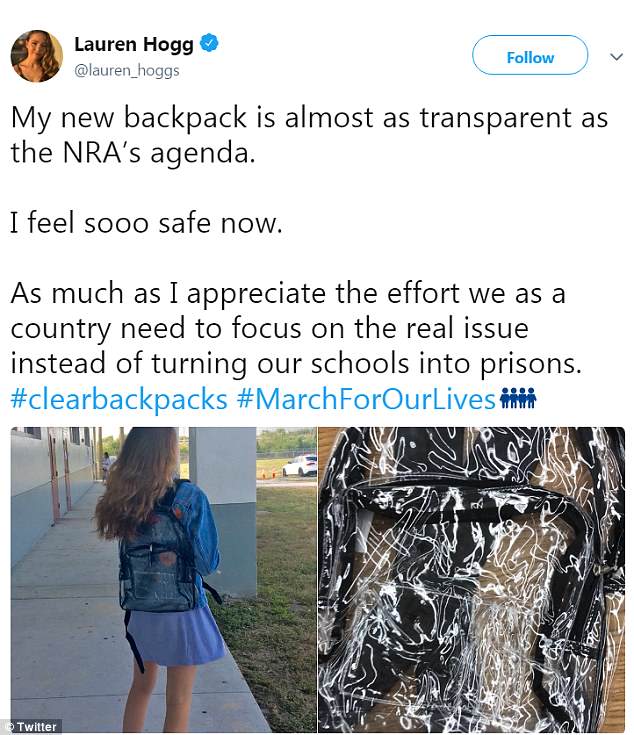 Focus on the real issue: Lauren Hogg said she appreciated the effort but also slammed the school’s new rule

On Monday many students at Marjory Stoneman Douglas High School took to Twitter to express their frustrations and protest what they’re calling a ‘band-aid’ security measure.

Before sharing a photo of his clear backpack filled with tampons, Kasky tweeted his displeasure regarding the mandate.

‘I was going to say… Unless they’re bullet-proof, I don’t feel much safer,’ he wrote.

‘When people pay money for these modifications on our school (the only school in the country that is being altered btw) that means someone is getting paid and I am sick and tired of us being treated like prize pigs.’

Jack Macleod tweeted that he believes in school safety implementations ‘but the bags seem more cosmetic than actually effective’. 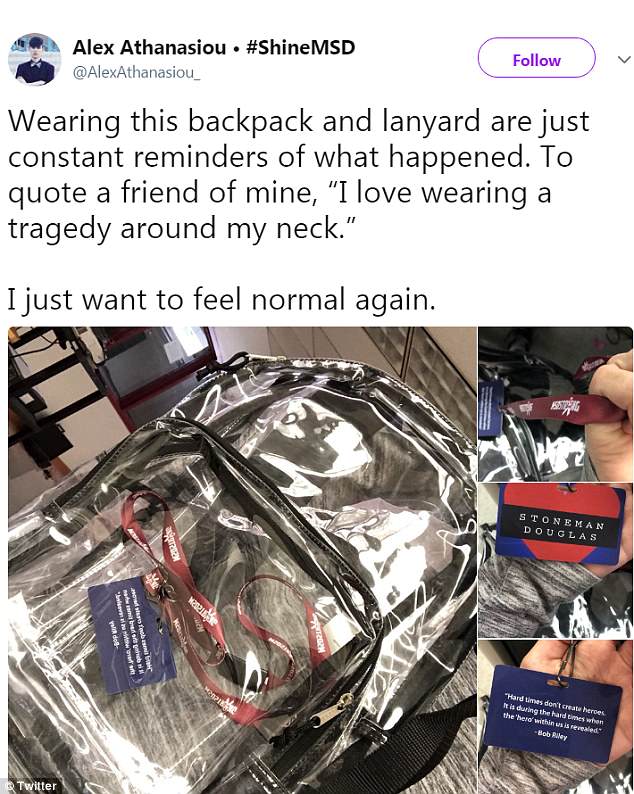 ‘I just want to feel normal again’: The school is also requiring students wear ID tags while on campus 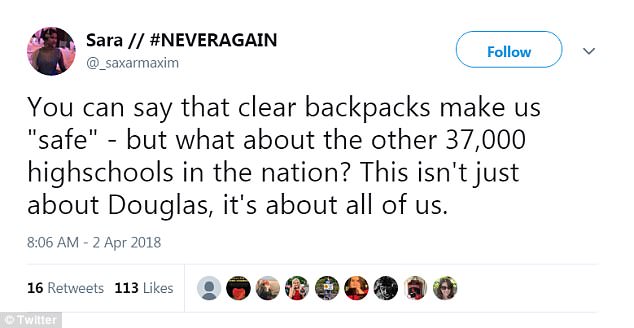 ‘It’s about all of us’: A student named Sara asked what precautions were being taken to make sure the other 37,000 high schools in the nation stay safe

Not working: Student Jack Macleod tweeted that he believes in school safety implementations ‘but the bags seem more cosmetic than actually effective’ 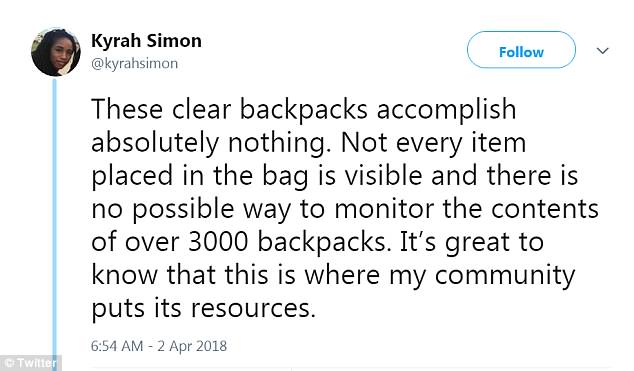 Making her point: Kyrah Simon pointed out that there is no way to monitor the contents of over 3,000 backpacks 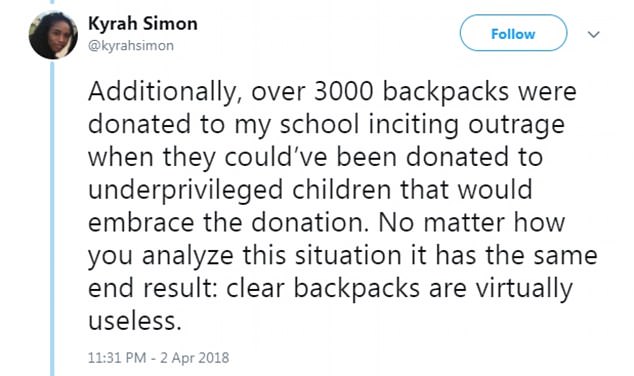 Shame: She went on to note that the backpacks could have been donated to underprivileged children who need them

Alex Athanasious said the backpacks were ‘constant reminders of what happened’

‘To quote a friend of mine: I love wearing a tragedy around my neck. I just want to feel normal again,’ the teen posted.

Some students attached an orange $1.05 price tag to their school-enforced bags. The tags were also seen during last months March For Our Lives rally in Washington, D.C.

Students and activists David Hogg and Lauren Hogg explained that they represented how much Republican senator Marco Rubio accepted from the NRA divided by every student in the state of Florida.

‘This backpack is probably worth more than my life,’ student Carmen Lo tweeted.

Lauren Hogg said she appreciates the effort but criticized the school’s new rule.

‘My new backpack is almost as transparent as the NRA’s agenda. I feel sooo safe now. As much as I appreciate the effort we as a country need to focus on the real issue instead of turning our schools into prisons,’ she said.