Police posing as terrorists managed to break into the House of Commons in less than five minutes during a late-night drill, it has been reported.

A group of officers gained access to Parliament by approaching on a boat before storming the Commons Chamber.

Night attack: Police officers raided Parliament during a drill earlier in the year. One source said that over 100 MPs could have been murdered if it were a real attack

A source told The Sunday Telegraph that the simulation showed over 100 MPs could have been slaughtered during the exercise.

‘I remember thinking “Jesus Christ, if that’s where we are at and that can happen, then the public would be horrified”,’ one source said.

Another explained: ‘[The public] would be scared stiff. They wouldn’t come back to the place.

‘It is not safe. We are sitting ducks in Parliament.’

The drill was conducted just weeks before jihadist murderer Khalid Masood stabbed a police officer to death on Parliament’s grounds after driving a car into pedestrians on Westminster Bridge. 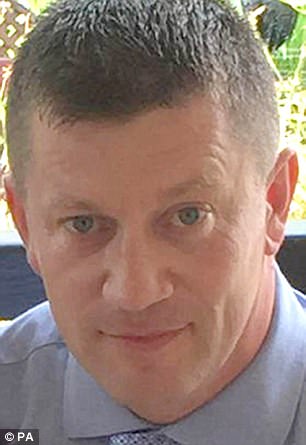 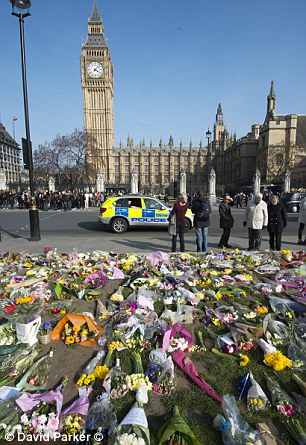 PC Keith Palmer (left) was murdered on Parliament’s grounds by a jihadist in March. Right: Tributes to PC Palmer and the other victims of the attack 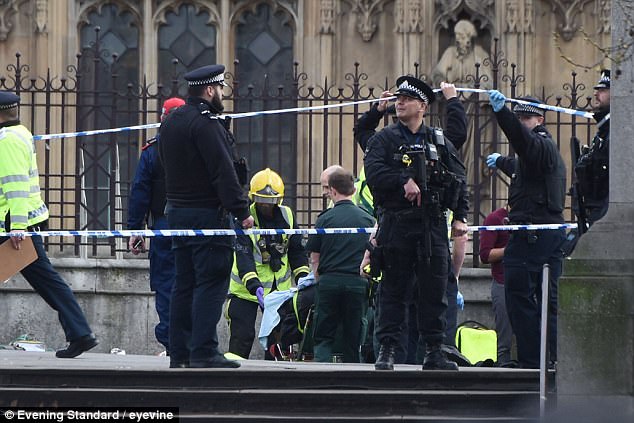 Five people were murdered during the Westminster attack

It was held during recess in a bid to keep its findings as quiet as possible, with most MPs unaware.

A spokesperson for Parliament said the safety of MPs was its ‘highest priority’ and stressed that security measures were constantly under review.

The drill was revealed as part of a probe into the Palace of Westminster’s security five months after Masood’s rampage.

It has also been revealed that an official has recommended the building of a barrier to stop boats reaching Parliament from the Thames.

An armed guard has also been placed at river entrances.

A 3ft-high fence around Parliament, meanwhile, has been highlighted as potentially low enough for an attacker to jump over.

It comes as a terror suspect deliberately drove at police outside Buckingham Palace then attacked three unarmed officers with a 4ft sword on Friday night.