Meghan Markle will sit down with the royal family to watch the Queen’s speech on Christmas Day at Sandringham, but Her Majesty will not join her.

For the most senior royal never joins the family when Prince Charles, William and Harry and their families gather round a TV set to watch her Christmas address to the nation.

Giving a revealing insight into what goes on at the Sandringham estate during Christmas, former royal butler Paul Burrell revealed the monarch hates seeing herself on TV and makes a point of avoiding her annual festive address.

‘The Queen’s Speech will be played at 3pm, they go through the saloon drawing room and switch the TV on, people will be expected to be there, he said.

‘But the one person missing will be Her Majesty, who will slip through the north end door and go for a walk, as she doesn’t like to watch herself.

Meghan Markle will spend Christmas at Sandringham with Prince Harry, the Queen and the rest of the Royal family, despite rumors of a rift with the Duchess of Cambridge 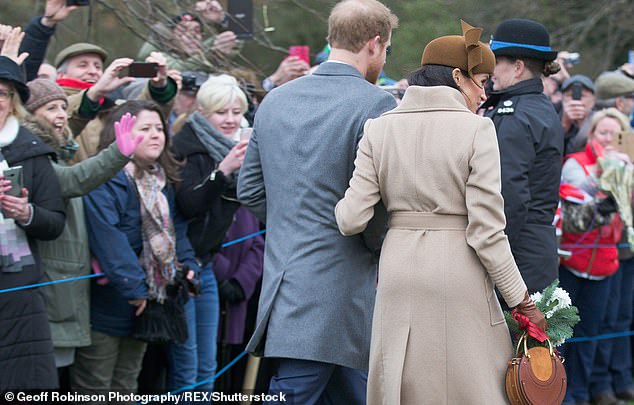 She will find her Christmas with the royal family unlike anything she has experienced, according to Princess Diana’s former butler Paul Burrell, who has revealed the quirky goings on at Sandringham over the festive period 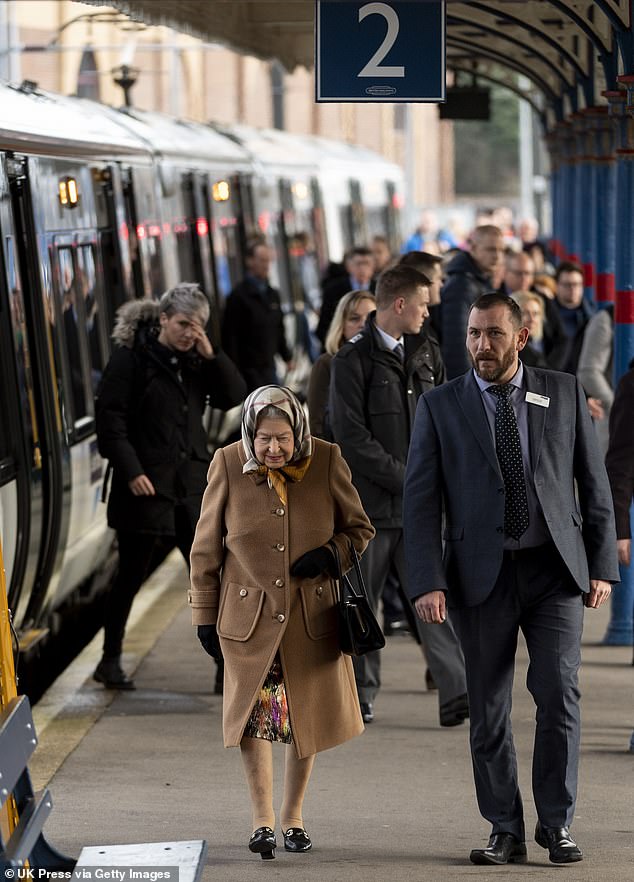 The monarch (pictured arriving at King’s Lynn station earlier this week to begin her Christmas holidays) hates seeing herself on TV and makes a point of avoiding her annual festive address, according to former butler, Paul Burrell

‘Then when she’s back they will congratulate her saying: ‘Oh, you were very good this year Granny. Well done’.

The decision by the Queen to miss her speech is just one of the quirky goings on at the Norfolk estate that newcomer the Duchess of Sussex will have to get used to.

She will find her Christmas with the royal family unlike anything she has experienced, according to Princess Diana’s former butler.

From the moment she wakes up the entire day will run like clockwork with lunch, drinks and even party games timed to perfection.

And while Meghan is likely to find the occasion overwhelming Princess Diana’s ‘rock’ said she could do no worse than join in the fun at the Sandringham estate – but risk missing the Queen’s televised speech at her peril. 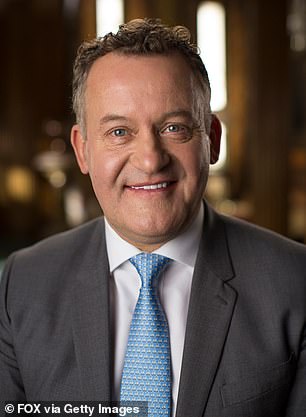 Burrell, who served as a footman to the Queen and butler to Diana for a total of 21 years, described the royal family Christmas as ‘intense but family fun’

Burrell said: ‘The Queen especially loves Christmas because she has her entire family under one roof. She wants to do things with the family, but she still does her boxes, even on Christmas Day. She always puts work before pleasure.’

While there are said to be tension between Meghan and the Duchess of Cambridge they are unlikely to surface as they sit round the table for Christmas lunch.

Family attendance the event is mandatory with Burrell saying all family members are expected to attend.

‘The Queen uses a three-line whip. You’re invited, you don’t refuse, you don’t ever turn the Queen down, said Burrell.

The seating plan for the lunch will have been carefully though out and any ill feeling among family members will be expected to be put aside and engage in polite small talk.

‘Even on Christmas Day, it’s all timed. You can’t say you ‘feel woozy, let’s have dinner later’, he said.

‘You have to sit next to someone you’ve not sat next to before, making polite conversation. There’s no opting out.

‘I’ve never seen any member of the Royal Family totally drunk and being helped to bed, but certainly I’ve seen them merry – and Christmas is that time.

The Duchess of Sussex should prepare herself for an intense four days at the Sandringham estate, which will be ‘occupied by some of the biggest personalities and egos in the country’, says Burrell 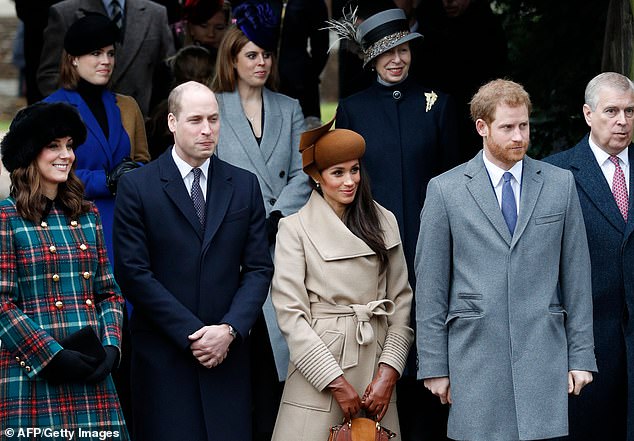 Burrell explains the festive period has always been used by the royal members to curry favor with the monarch and Meghan should seize the opportunity to talk to Her Majesty. Above Meghan is pictured during her first Christmas with the royals in 2017

‘The drinks trolley only appears before lunch, before and after dinner, you can’t just help yourself. Only fine wines are allowed at the table, not off it. It’s a very regimented house.’

Unlike most families who have eaten too much and settle down in front of the TV, the Queen and her family will be making their own entertainment.

‘They never sit around the TV like we do. There’s no TV in the dining room, they make their own entertainment. ‘

As a Hollywood actress Meghan would be expected to excel if a game of charades is on the Christmas Day agenda.

She will have been advised by Harry about how the day unfolds and also what present she could buy for the Queen.

Recalling his visits to Sandringham he said: ‘A book is a good present (for the Queen), she loves Jeffrey Archer novels and crime fiction. Or anything with horses or sport, but she loves a thriller.

‘She always has a selection of the top 10 novels, if you’ve ever had a novel in the top 10, then you can be sure that the Queen will have read it.’

He advises Meghan that ‘practicality is the word’ on buying a Christmas present for the Queen, someone ‘who has everything’, saying: ‘Get something for the picnic, a tartan rug, Tupperware containers, something for the barbecue as Prince Philip likes tongs or the latest pepper mill. Or dog leads, as The Queen is always losing them.

‘One year all the household staff had a collection and bought the Queen and the Duke of Edinburgh an ice bucket with all our names inscribed into it.

‘Maybe a flowering jasmine plant, that she loves the smell of, or a Hermes scarf, as she wears one all the time when walking with her dogs.’

The man that Diana described as her rock until her death in 1997 reveals some of the high jinks – often led by Prince Harry and William – at this most royal of Christmas celebrations: ‘It’s intense but fun for the family.’

Burrell, who served as a footman to the Queen before becoming Diana’s butler until her death in 1997, had told Daily MailTV that ‘Sandringham is Downton Abbey on speed’ and that it would be a Christmas ‘full of egos’, where she should stay close to Harry and the Queen – because other royals will be out to get her, setting ‘traps’.

It comes after he prepped Diana when she first came into the family, by advising her to also get plenty of face to face chats the Queen, with the best time being ‘when she’s at her card table, where she will sit and play Bridge or Canasta and she’ll ask people to join her.’

He says that Meghan’s own family troubles – with her father Thomas Sr taking part in staged paparazzi photos and with her half-sister Samantha’s publicity-hungry outbursts – could be nothing compared to what will hit her when she travels up to the family’s country estate in Norfolk for four days from Christmas Eve.