Defense Secretary Lloyd Austin said the United States’ ‘work is not done’ in Afghanistan and defended the 20-year occupation as a ‘necessary war of self-defense’ on Tuesday.

In a statement marking one year since the last American soldier left Kabul, Austin commended the ‘noble service’ of the military and the 2,461 troops who died while in Afghanistan since 2001.

He also called on Americans to ‘keep having’ discussions ‘about the costs of the war and what their sacrifices meant’ even as Republicans accuse the Biden administration of trying to bury the chaotic withdrawal effort that marked the end of it.

As the midterm elections draw near, GOP lawmakers have vowed to further investigation the withdrawal if they win the Congressional majority next year – as well as what led to the Taliban toppling Afghanistan’s democratically-elected government within a matter of weeks.

‘The United States went to Afghanistan in 2001 to wage a necessary war of self-defense. On September 11, 2001, al-Qaeda terrorists attacked our country. They were able to plan and execute such a horrific attack because their Taliban hosts had given them safe haven in Afghanistan,’ Austin said in his statement.

He pointed out that such an attack hasn’t occurred on US soil since, claiming it ‘speaks to the entire US government’s efforts to defend our citizens from terrorist threats that could emanate from Afghanistan or anywhere around the globe.’

‘Still, we know this work is not done. We must keep a relentless focus on counterterrorism – and we are,’ the Pentagon chief continued, pointing to the recent killings of key ISIS officials and Al Qaeda leader Ayman al-Zawahiri. 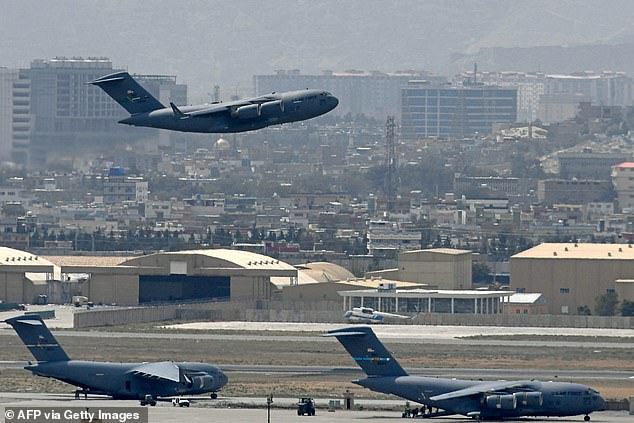 ‘We’re committed to supporting a whole-of-government effort to address the root causes of violent extremism. No one should doubt America’s resolve to keep our people safe.’

His statement framed the US withdrawal effort as a success, highlighting the 124,000 people who were evacuated in the waning days of the West’s occupation.

Lower down in the statement Austin did concede there were people still calling for answers.

‘As our country looks back on two decades of combat in Afghanistan, I understand that many people have hard questions about the costs of the war and what their sacrifices meant,’ he said.

‘These are important discussions, and I hope we will keep having them with thoughtfulness and respect.’

It comes two weeks after House Republicans on the Foreign Affairs Committee released a preliminary report of their investigation into the withdrawal. 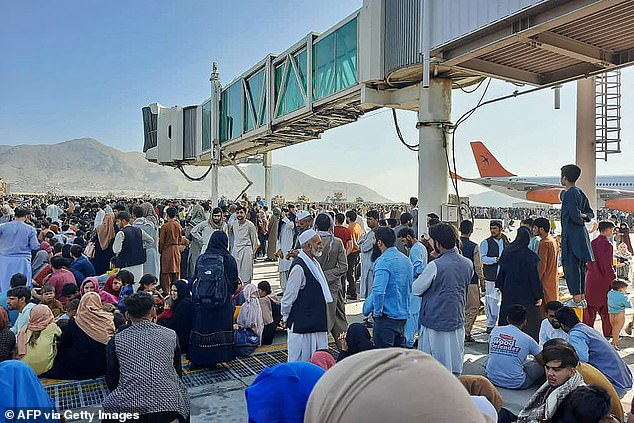 In this file photo Afghans crowd at the tarmac of the Kabul airport on August 16, 2021, to flee the country after the Taliban took in control of Afghanistan

The report paints a damning picture blaming a ‘failure to plan’ on the part of Biden and his State Department leading ‘to chaos and confusion’ in the withdrawal.

It also suggests the Biden administration may have dramatically undercounted the number of US citizens stuck in Afghanistan at the end of the US military’s operation.

More than 800 Americans were rescued by the State Department from ‘behind enemy lines’ in the year since the US pulled out of Kabul on August 30, 2021, according to the report.

Secretary of State Antony Blinken said in September of that year that less than 100 Americans were still within Afghanistan’s borders and trying to escape.

The White House National Security Council dismissed the report as ‘partisan’ and said it was ‘riddled with inaccuracies’ in a rebuttal statement.

The National Security Council pointed to Trump’s agreement with the Taliban having ‘weakened our partners in the Afghan government’ as setting the stage for the precarious situation.

On Friday, GOP Rep. Michael Waltz told DailyMail.com that he believed a committee should be formed to investigate the withdrawal effort.

‘Exactly where that committee will be housed is still under discussion. But it needs to have oversight – this is the part that I think is critical – it must have oversight of the Defense Department, the intelligence community and the State Department,’ Waltz said.

He said it was clear to him, as a member of the Armed Services Committee, that the Biden administration wants to move on 12 months after facing bipartisan criticism over the operation.

‘I mean, that’s obvious. And I think Democrats in Congress want it swept under the rug. I mean, we’ve seen, what, one hearing…Armed Services Committee, and then one in Foreign Affairs…that was determined that it’d be classified, so it was closed,’ Waltz said. ‘I think it’s disgraceful and it’s unbecoming.’