Sydney’s controversial stadium rebuild that no one wants could blow out to more than $1 billion and cost NSW the NRL Grand Final.

Almost $40 million has already been spent knocking down the perfectly good 20-year-old Allianz Stadium a stone’s throw from the 171-year-old SCG.

Seven months after the bulldozers moved in, all the people of Sydney have to show for the state government’s grand plan is a depressing pile of rubble.

Seven months after the bulldozers moved in, all the people of Sydney have to show for the state government’s grand plan to rebuild Allianz Stadium is a depressing pile of rubble 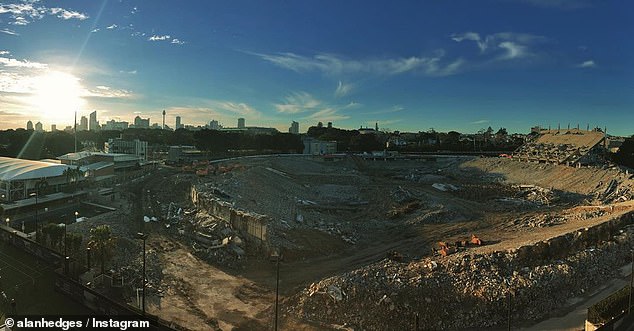 So badly has the government dropped the ball that it is now scrambling to find a new company to build it after Lendlease walked away last week.

The construction giant reportedly wanted up to an extra $100 million to build the stadium and advised the 2022 finish date couldn’t be met.

The project was already running six months behind its initial January 2022 completion date with July 2022 the revised one. 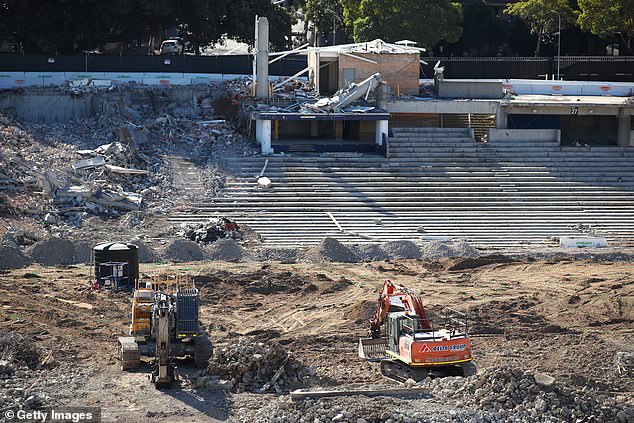 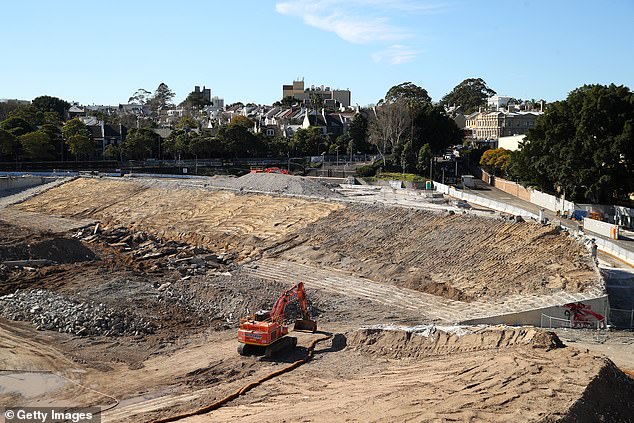 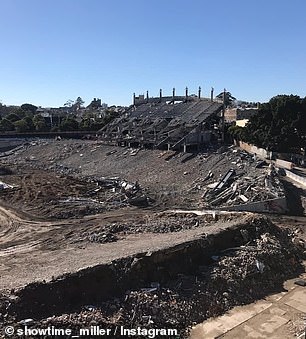 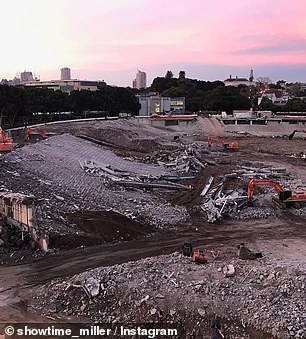 Chairs have been stripped and the grass fields torn up, leaving a pit of nothingness at the grounds of the Allianz stadium

* NSW Government announced it would spend $2 billion knocking down ANZ and Allianz Stadiums and rebuilding them. Both are 20 years old.

* Demolition of Allianz began in January months before government was reelected at the March election.

* About $729 million was budgeted for the project, almost $40 million is already spent on demolition.

* Company advised the timeline couldn’t be done on budget.

* If Allianz is delayed along with ANZ, the 2022 or even 2021 NRL Grand Final could be move to Brisbane.

Lendlease is believed to have offered to scale back the stadium’s facilities to cut costs, putting it on par with Parramatta stadium.

But this would defeat the purpose of tearing down a relatively new ground to build a lavish arena in its place and was rejected.

Premier Gladys Berejiklian spun Lendlease’s departure as a sign that her government wouldn’t be ‘taken for a ride’.

The premier insisted despite no longer having a builder that one would be found to complete the work on time and on budget.

‘We want to make sure it’s world-class… within the budget and we look forward to having a contractor on board to meet those requirements.’

However, with many big firms tied up with Australia’s current infrastructure boom, there is a risk it won’t even be able to get the same deal Lendlease offered.

Costs could easily blow out to more than $1 billion and take many months or years longer – all funded by NSW taxpayers.

The design for the new stadium has not even been approved by planning authorities yet and may not be until the end of the year.

The proposal is still awaiting public submissions, to which Infrastructure NSW is due to respond by September 26.

Approval will then be mired in three successive phases – assessment, recommendation, and determination. 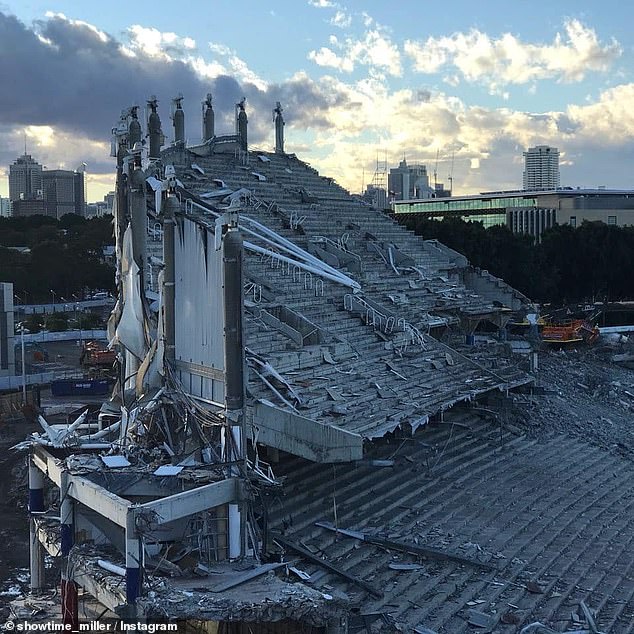 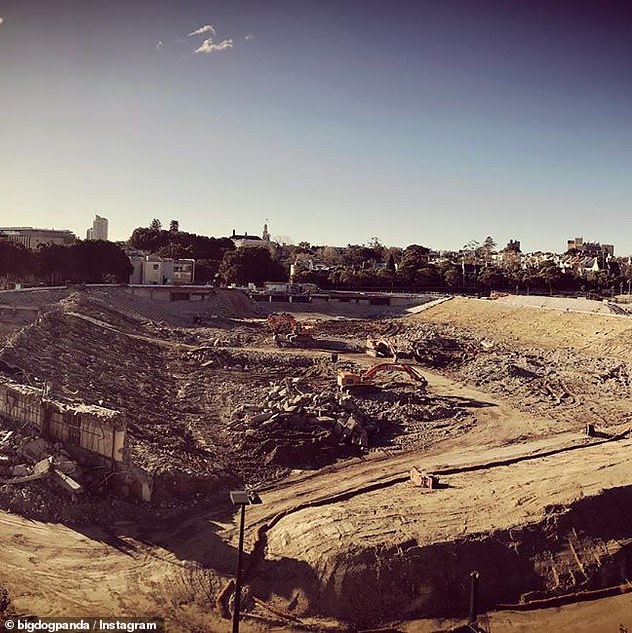 Issues being debated include what non-sporting events will be hosted at the new stadium, updating the wind impact, visual impact and social impact assessments, and where the 600 construction workers will park, according to the Daily Telegraph.

So haphazard was the government’s planning that Lendlease was handed the demolition and construction contract before the design was even complete.

Not content to bulldoze one functional footy ground, the government plans to do the same to ANZ Stadium in western Sydney.

That knock down and rebuild would cost $810 million, with a push to add a $150 million roof to the design.

Taxpayers will be up for even more extra costs in the event ANZ Stadium is not ready for the 2021 NRL Grand Final and beyond. 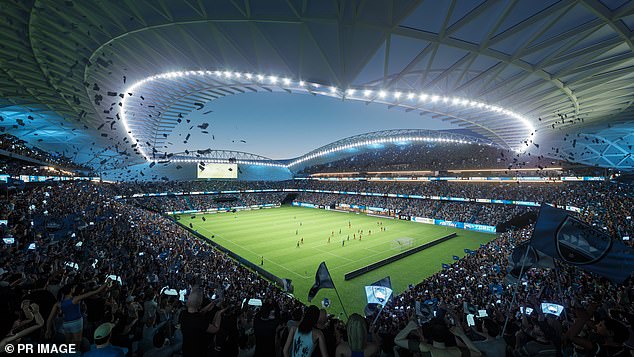 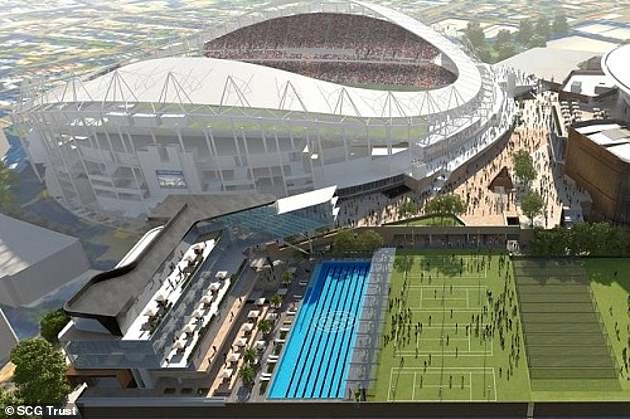 ‘State of the art’: An artist’s impression of what swish new recreational Sydney Cricket Ground recreational facilities would look like (2014) 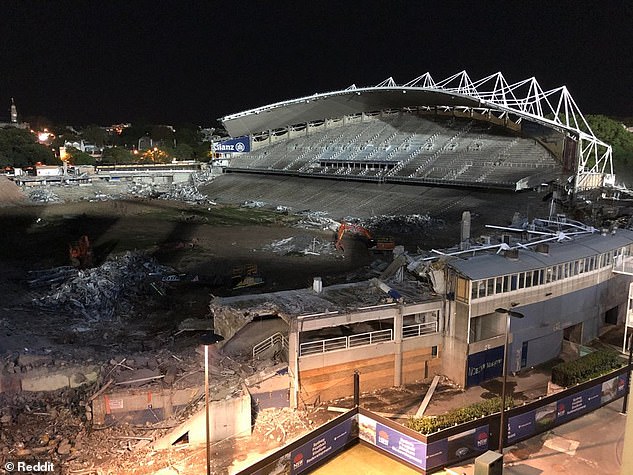 The NRL agreed to have the SCG host the 2020 final, and is seeking compensation for lost ticket sales if its unavailability continues.

The league calculated it would lose $20 million in takings from holding 2021 at the SCG and 2022 at the rebuilt Allianz.

Should both Allianz and ANZ be off the table in 2022 the NRL is believed to have little appetite for yet another SCG game.

Both Melbourne and Brisbane are keen to steal the big match away from Sydney, and the NRL may even send it to one of them in 2021 if it can’t come to terms with the NSW Government over compensation.

This chaotic situation has been fostered upon a state where 52 per cent of voters are opposed to the stadium rebuilds in the first place.

A poll ahead of the NSW Election in March found about 37 per cent supported or strongly supported the policy and about 10 per cent were undecided.