The Government’s dedicated efforts to destroy our economy and an entire way of life have moved up a step.

High streets had just begun to stir feebly back into life after months of enforced shutdown. Then the futile decree went out from Downing Street that customers must wear muzzles.

And what will happen? Why, more people will choose not to bother to go near shops at all. They will buy from the internet giants instead.

Shoppers are seen above in Windsor. High streets had just begun to stir feebly back into life after months of enforced shutdown. Then the futile decree went out from Downing Street that customers must wear muzzles

The Government has convinced itself that this idiotic measure will somehow increase confidence. Really? After deliberately terrifying us with horror stories about a huge and deadly plague poised to slay millions and to turn our hospitals into charnel houses?

This did not happen because it was never going to happen, as more and more studies (the latest from Toronto University) are showing. The Government panicked over the wrong advice.

This superstitious, anti-scientific rubbish was challenged repeatedly by distinguished experts of all kinds, ignored by Government and BBC alike. But it has worked only too well. Travellers on public transport, where the muzzle edict has been in force for weeks, could have told them.

People are still scared to travel. Or – and this is a major factor in our approaching national doom – they have worked out that by pretending to be afraid, they can continue to stay away from work while still getting paid.

In fact, Prime Minister Alexander Johnson (can we drop the matey ‘Boris’ for ever? He is not our mate) has in a few short weeks done more damage to Britain’s railways than the notorious axeman Dr Richard Beeching of despised memory did back in the 1960s. 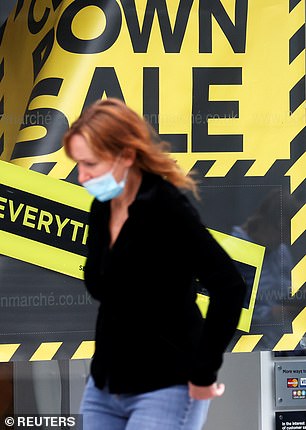 The Government has convinced itself that this idiotic measure will somehow increase confidence. Really? One shopper is seen above in Bolton

Now Mr Johnson is destroying high streets too. This means the wreckage of lives and the impoverishment of life at the same time. As new figures clearly showed yesterday, his actions have already greatly boosted mail-order shopping at the expense of real shops.

If you think this does not matter, then do two things: find out about the working lives of those who toil in the vast computerised warehouses that so efficiently send you the goods you order with a click of your mouse; and imagine your own home town with most of its familiar traders closed down. Imagine what, if anything, will replace them, and the personal service and contact they provide.

This is just a small instance of the great hurricane of economic destruction that has been unleashed on us by a government that has no idea what it is doing. The free money cannot last much longer.

Closures, job cuts, inflation, tax rises and a slashing of public services are all on their way.

The price of gold, that great warning barometer of economic storms to come, is climbing almost daily. And what looks increasingly like a badly bungled exit from the EU will only add to our perils after Christmas.

The prophetic words of Rudyard Kipling return again and again to my mind ‘… we were promised abundance for all / By robbing selected Peter to pay for collective Paul / But, though we had plenty of money, there was nothing our money could buy / And the Gods of the Copybook Headings said: “If you don’t work, you die.” ’

I see the Prime Minister and his colleagues as a gaggle of Oxbridge undergraduates, full of their own brilliance, chattering wittily and slurping champagne beneath a parasol as their punt drifts down the pretty river.

But the river, smooth as it is, is not the quiet Cam or the gentle Isis – it is the Niagara, and that deep growl they hear in the distance when they pause in their banter is the catastrophe towards which they are steering, because they dare not admit to us or to themselves that they made a terrible mistake.

One of the most beautiful things in England, in fact in the world, is the music of cathedral choirs, now under severe threat from the Government’s suppression of almost all normal human activity.

That music is about as diverse and inclusive as it can get, as it comes from the ancient monastic cycle of prayer and song that once united the whole of Europe but survives, almost uniquely, here.

Some of it is so lovely that I cannot believe anybody, from any culture in the world, will not be profoundly moved by it.

Yet here we see Sheffield Cathedral, perhaps grabbing its chance amid the state-induced coma which grips the country, declaring that it will ‘stand down’ its choir. It’s not diverse enough, you see.

Such choirs are forged by centuries of tradition and long hours of hard and dedicated work. They cannot be made overnight, and once dispersed are as hard to recreate as a dream that faded on waking.

We are truly living in revolutionary times, and only beginning to discover what a terrible thing that is.

Does the Dame have no shame?

She might feel a bit of it, most recently, over her force’s terrible and so far unpunished mistreatment of the late Field Marshal Edwin Bramall and others, after they were falsely accused of filthy crimes by an obvious fantasist.

So what are we to make of her telling a London radio station that she hopes people who do not comply with the face mask decree ‘will be shamed into complying or shamed to leave the store by the store keepers or by other members of the public’?

Is this, as it appears to be, the condoning by a senior police officer of bullying vigilante action?

Such bullying may well be directed against people with legitimate exemptions invisible to their persecutors. If so, then shame on her. I have never understood how even the politically correct elite could have promoted Dame Cressida to such an important job. 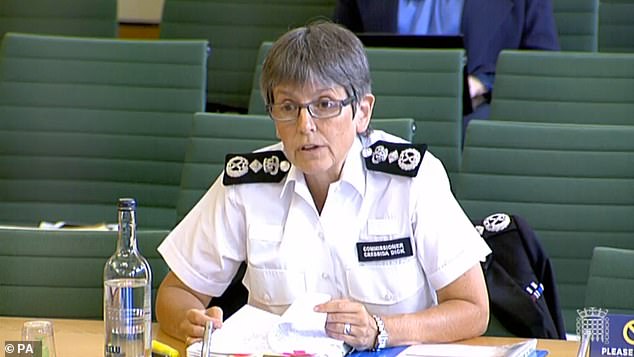 I am afraid I chortled several times as I read the Parliamentary Intelligence and Security Committee’s oh-so-serious report on Russia.

As well as being almost entirely free of new facts, it hilariously accused the Russians of being paranoid about us. Well, perhaps they are. Russia has been invaded so many times (even we have had a go) that it is entitled to be a bit over-defensive.

But if so, the British attitude towards Moscow is just as psychiatric, especially given our elite’s greed for Russian money and their readiness to consort with (and take donations from) Russian billionaires who are no better than they ought to be.

We have no border with Russia, nor any other territorial, naval or economic conflict, and long ago lost the Indian empire that lay at their back door. We hardly trade with them.

I am pretty sure that they spend very little time thinking about us, except as a minor hanger-on of the USA. Do they really seek to intervene in our politics? For what end? They are a poor, under-populated country nearly 2,000 miles away, in serious danger of being bought up by China. And if they mount cyber-attacks on us, as I am sure they do, are we not doing the same to them?

I learned from the report that we now have something called a National Offensive Cyber Programme, whose title suggests that its staff might possibly engage in a little bit of electronic aggression from time to time. And quite right too.

Countries that don’t prepare for battle lose wars. But it is a bit ridiculous to have an offensive cyber programme and then moan self-righteously when your target returns the favour.