Pictured for the first time AFTER crocodile attack: Twins who survived lagoon horror

The twins who survived a lagoon horror crocodile attack have been pictured for the first time since the nightmare incident.

Melissa Laurie is seen smiling from hospital alongside her sister Georgia after narrowly escaping death at a waterway in Mexico.

Georgia, 28, had repeatedly punched the crocodile on the nose after seeing it pounce on her sister on June 6.

She told ITV News she had seen her sister’s body ‘floating towards her’ after Melissa, who alerted the group to the danger, did not make it back to the bank.

The pair had been swimming at Manialtepec Lagoon with two friends when the animal attacked Melissa and dragged her beneath the water.

Georgia had managed to escape, but went back into the water after her sister did not respond to her calls, and confronted the crocodile. 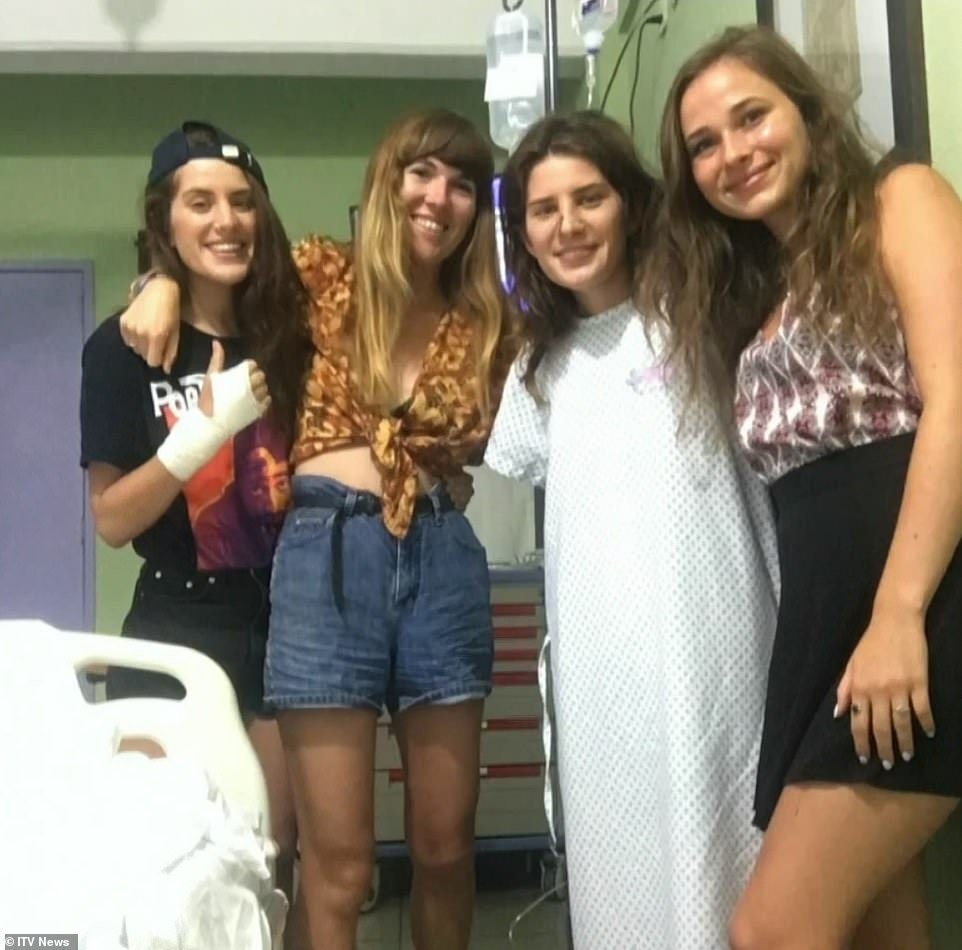 Pictured: The twins and friends in hospital following the horrific crocodile attack in Mexico 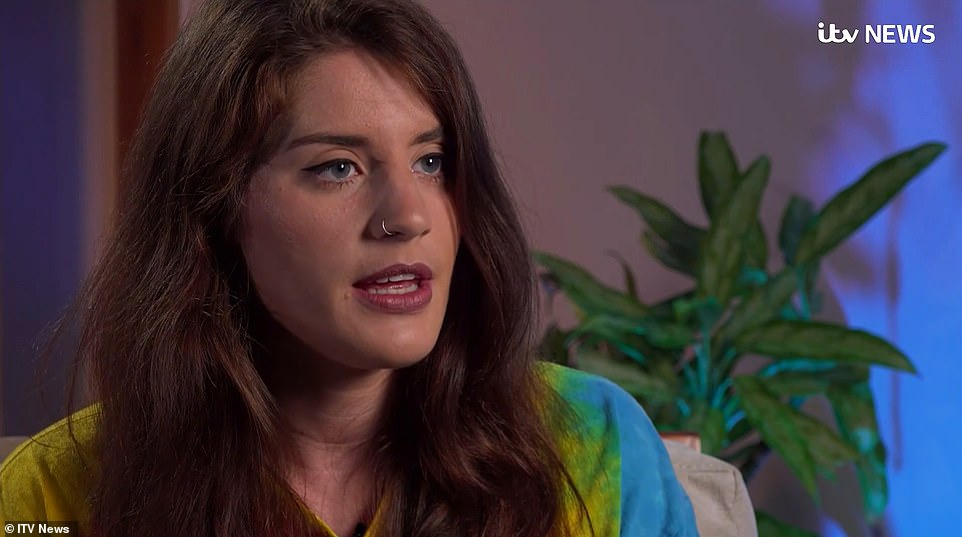 ‘I thought at one point she was dead’: Georgia Laurie explains what happened as the crocodile launched three attacks on her sister

Georgia added: ‘We saw the crocodile and we tried to swim to safety but unfortunately my sister didn’t escape that – so it took her under.

‘I jumped into action with my rescue training that I remember and dragged her body towards me and laid her on my chest and tried to revive and she started going into a fit. 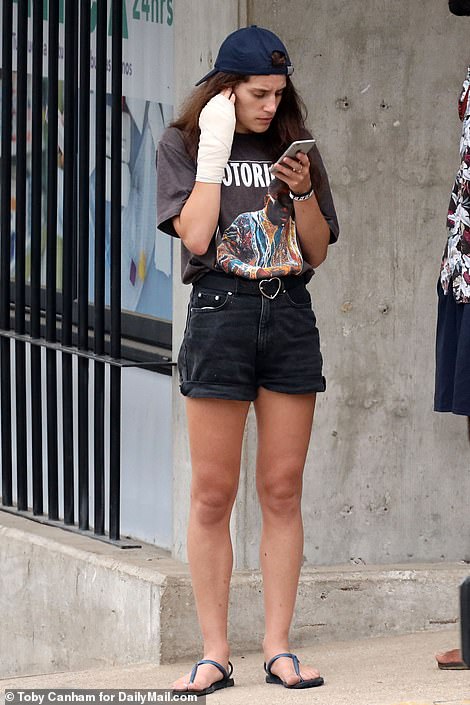 ‘And the crocodile came back twice – so I beat it off but the third time is when I sustained the most injuries’.

Georgia said that Melissa remembers being dragged underwater in the first crocodile attack, feeling like she was going to drown and thinking her arm was being ripped off.

The only other thing Melissa remembered was her sister singing to her on the boat to comfort her as she drifted in and out of consciousness.

Georgia explained how a boat with tour guide went past at the right time, but those onboard could not help at the time.

The crocodile then came back for a third time, injuring Melissa as it tried to death roll and take her away, but it eventually fled following Georgia’s sustained punching on the nose.

Melissa sustained puncture marks covering her abdomen and legs, along with a fractured wrist, cuts to her stomach and water in her lungs, Georgia said.

She was last week seen walking around the hospital with wounds to her hand – sustained from punching the crocodile during the on June 6 ordeal.

Speaking at the hostel where she is staying, Georgia, from Sandhurst, Berkshire, had said: ‘It was fight or flight and you fight for the ones you love.’

The parents of the British twin sisters have now flown out to Mexico to support them.

Sean and Sue Laurie flew out of Heathrow to Mexico City to support twins Melissa and Georgia after a horrifying crocodile attack on June 6.

Sue, 62, told MailOnline: ‘I don’t want to go to Mexico – you hear terrible stories about how dangerous it is – but the girls need their mum. 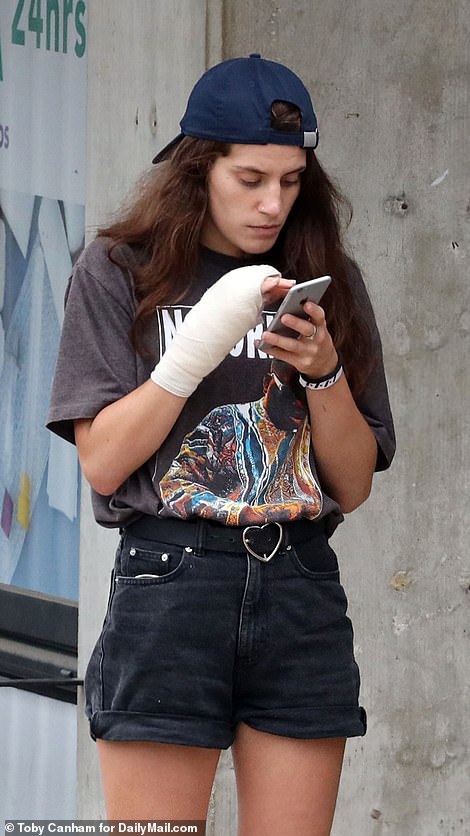 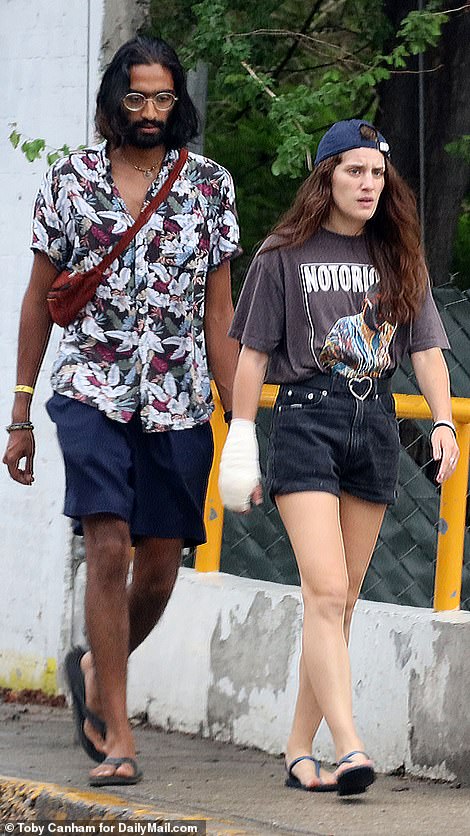 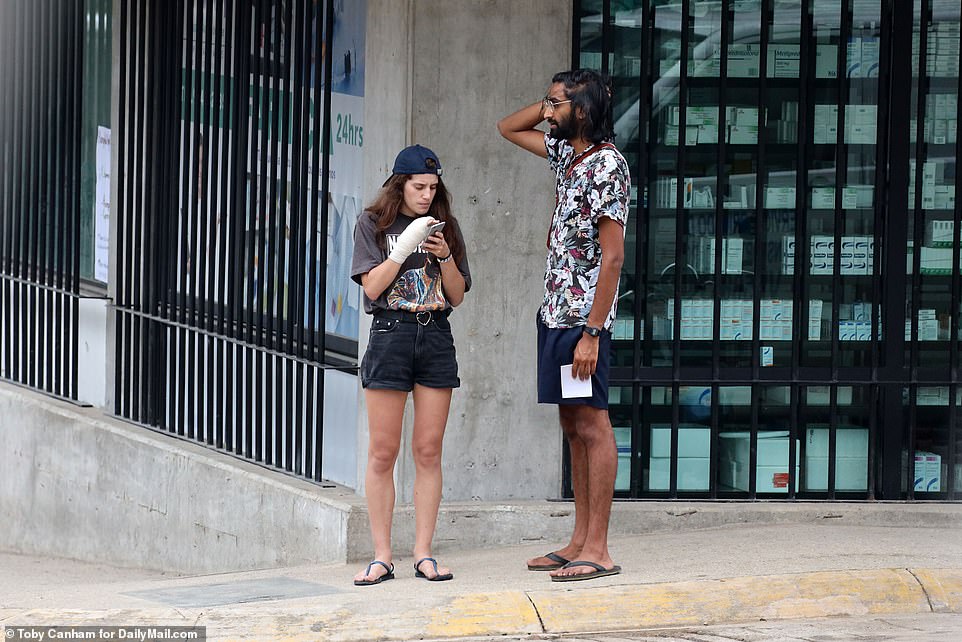 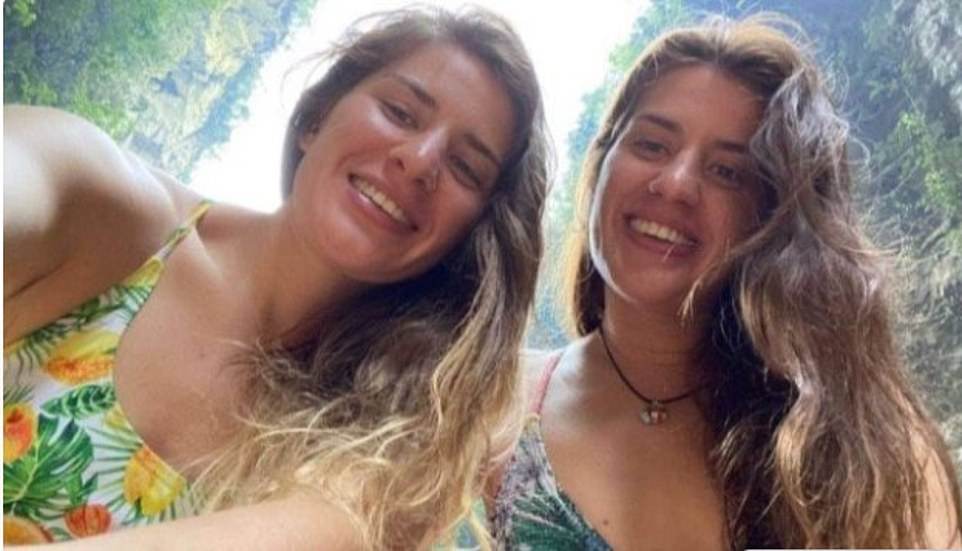 ‘Georgia has been fantastic and did everything she could for her sister. But she needs support. The needs the comfort of her family.

‘She tries to put on a brave face but really she is quite fragile. Georgia wants me to come there. She wants her mum. So obviously I am going.’

Melissa suffered terrible injuries from the attack including deep bites to her body, legs, hands and wrists – some of which turned septic.

She also suffered a suspected punctured lung and was put in a medically induced coma to aid her recovery.

But she has been brought round now and is able to speak to Georgia who visits her regularly at the private hospital where she is being treated.

Her husband Sean added: ‘Obviously we want to do everything we can for our girls. We can be by Melissa’s bedside but we can also help in getting her home.’

It comes after sister Georgia spoke for the first time about punching the croc after it grabbed her twin. 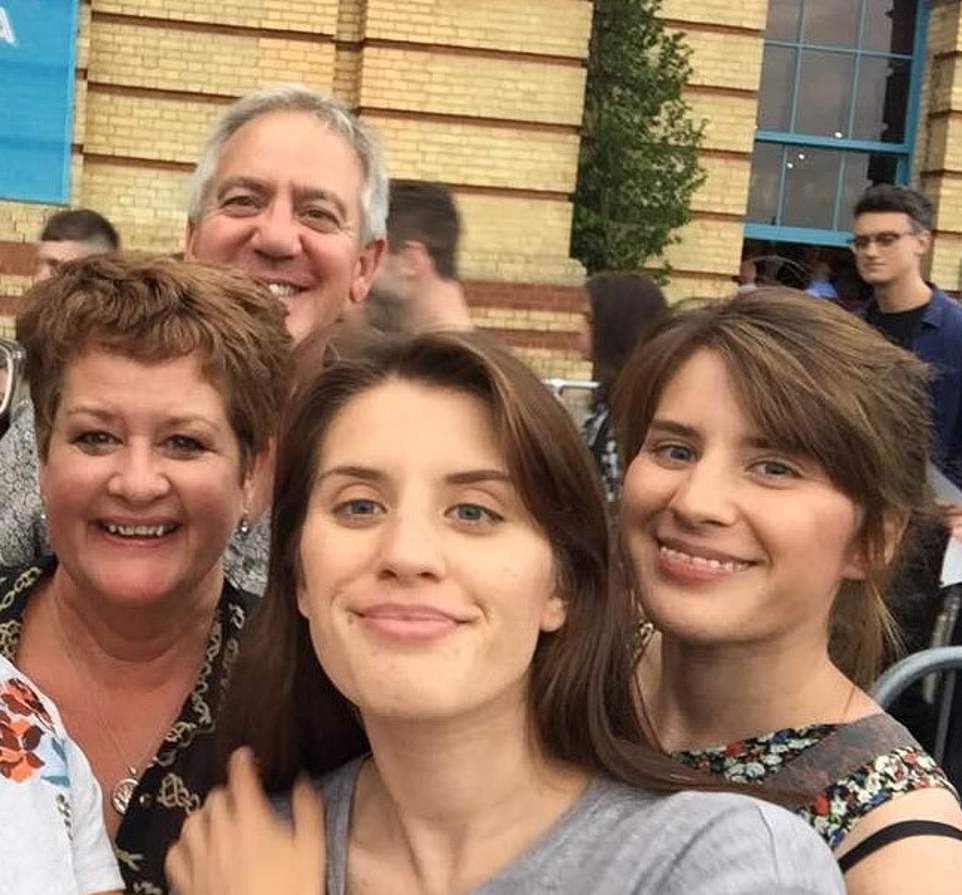 Sean and Sue Laurie (left), parents of crocodile attack twins Melissa and Georgia (right) have flown to Mexico today to support the sisters as they recover 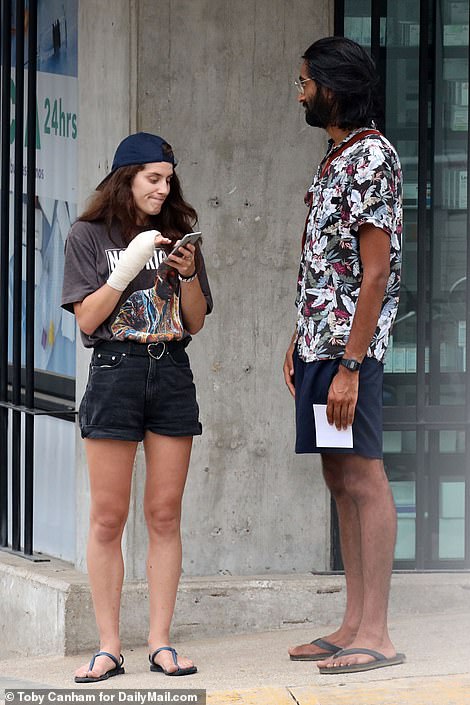 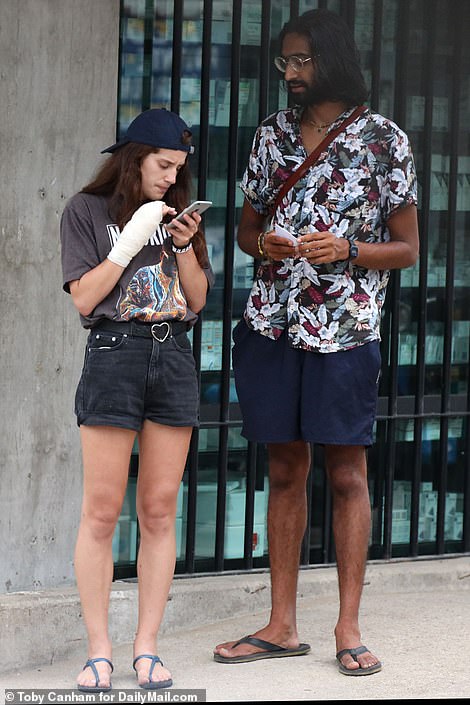 Georgia, an experienced diver, told how she did not realise the severity of her own injuries until a nurse examined her at the hospital in the surfing resort of Puerto Escondido

‘It was trying to take her away,’ Georgia said. ‘I punched it in the nose with both fists and it felt hard, like hitting a table, but it scared it off.’

‘No one warned us there were crocodiles there at all. We hadn’t been drinking, there was no alcohol involved.

‘We were just there for a chill-out. Melissa swan off by herself and got into trouble. I didn’t know what was happening but I swan towards her.’

As she got closer Georgia, a qualified diver, noticed the reptile viciously attacking her sister.

‘I saw her getting jerked around and I saw a croc’s head which was about two feet long. The croc swam off, but kept coming back,’ she said, the Sun reported.

‘That’s when it grabbed her by the leg and got her in a death roll. She went round and round and it was trying to drag her away.

‘I was pounding it, and that’s when it grabbed me and bit my arm. I bashed it with the other hand and it let me go. That happened three times.

‘The croc battle seemed to go on a long time but adrenalin kicked in.’

Melissa was then pulled from the water by Georgia with the help of Moises Salinas, a 16-year-old deck hand on a tour boat named Espatula Rosada. 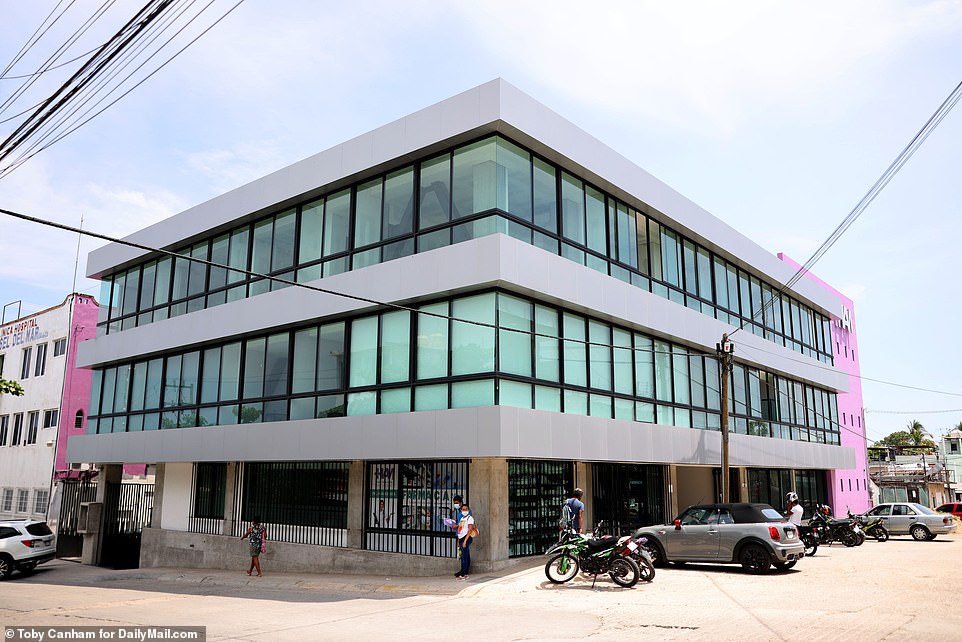 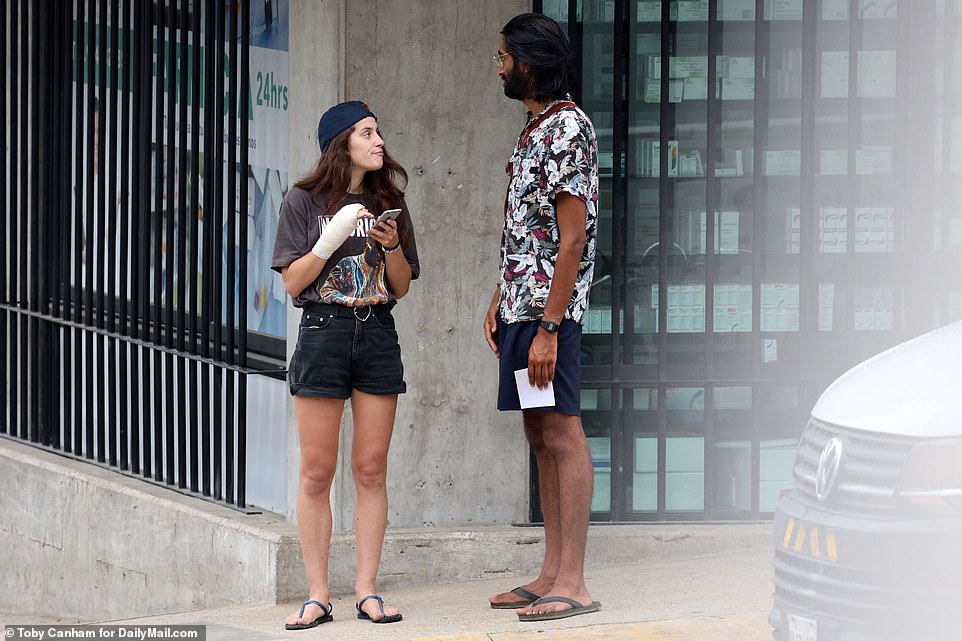 She explained that due to the adrenalin pumping around her body, it wasn’t until the nurses opened up her fists that she saw she had lacerations on her own hands

Salinas jumped into the shallow murky waters along the Manialtepec River and helped pull Melissa onto the boat before rushing her and her sister to a waiting ambulance 20 minutes away.

Once Melissa was on the boat, the extent of her injuries became clear, Georgia said.

‘She had puncture wounds everywhere but wasn’t bleeding out. She was drifting in and out of consciousness,

‘The thing that worried me was she was coughing up blood and saying, ‘I’m drowning, I’m drowning’. It was scary, and she screamed too.

‘I thought of how I had seen her face down in the water for a long time, so I was worried how much water she had swallowed.’

Once at hospital, Georgia explained: ‘the doctors were worried about her lungs, because they thought she may have got pneumonia from an infection.

‘I had to sign some papers saying treatment could go ahead, which included an induced coma. That was scary, because it seemed touch and go.’ 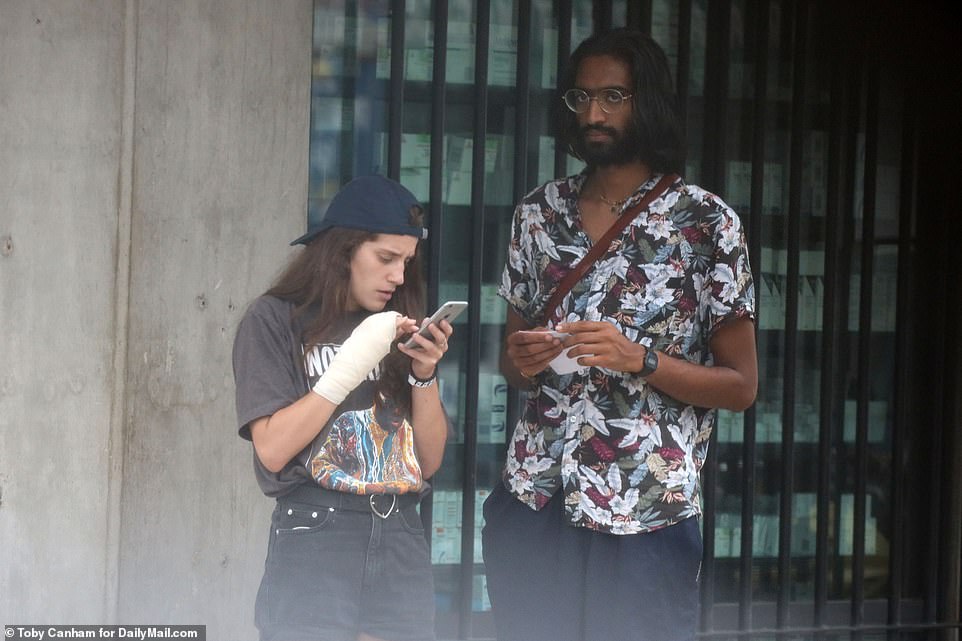 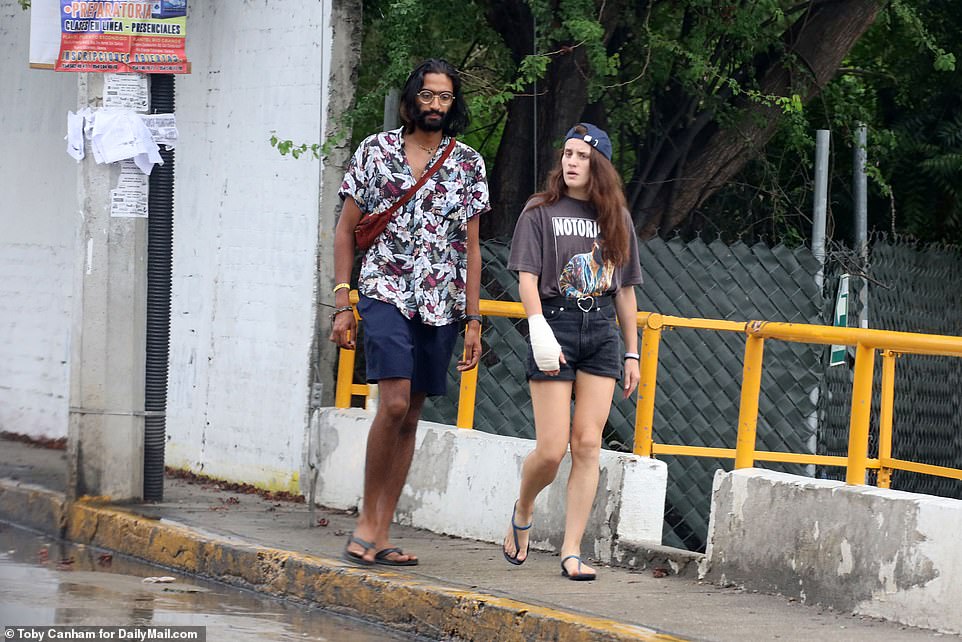 Melissa was woken from the coma last week and in a short voice message from her hospital bed told MailOnline: ‘I am extremely grateful that I came out of this alive.

‘And that I had Georgia fight my side for me. So I am very happy for that.’

Melissa suffered terrible injuries from the attack including deep bites to her body, legs, hands and wrists – some of which turned septic. She also suffered a suspected punctured lung.

Georgia had earlier explained that due to the adrenalin pumping around her body, it wasn’t until the nurses opened up her fists that she saw she had lacerations on her own hands.

Up until then she had been fully focused just on her sister’s well-being.

Georgia added that Melissa is out of the medically induced coma that doctors placed her in to aid her recovery.

Georgia told the BBC: ‘I just want to let you know that I saw Mel earlier and she doing really much better.

‘She is doing really good. 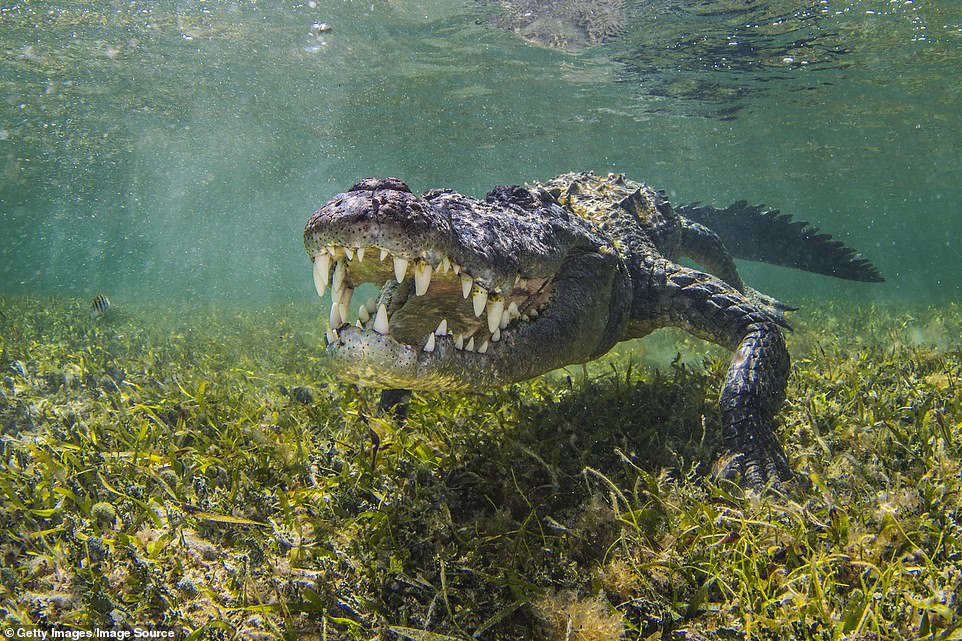 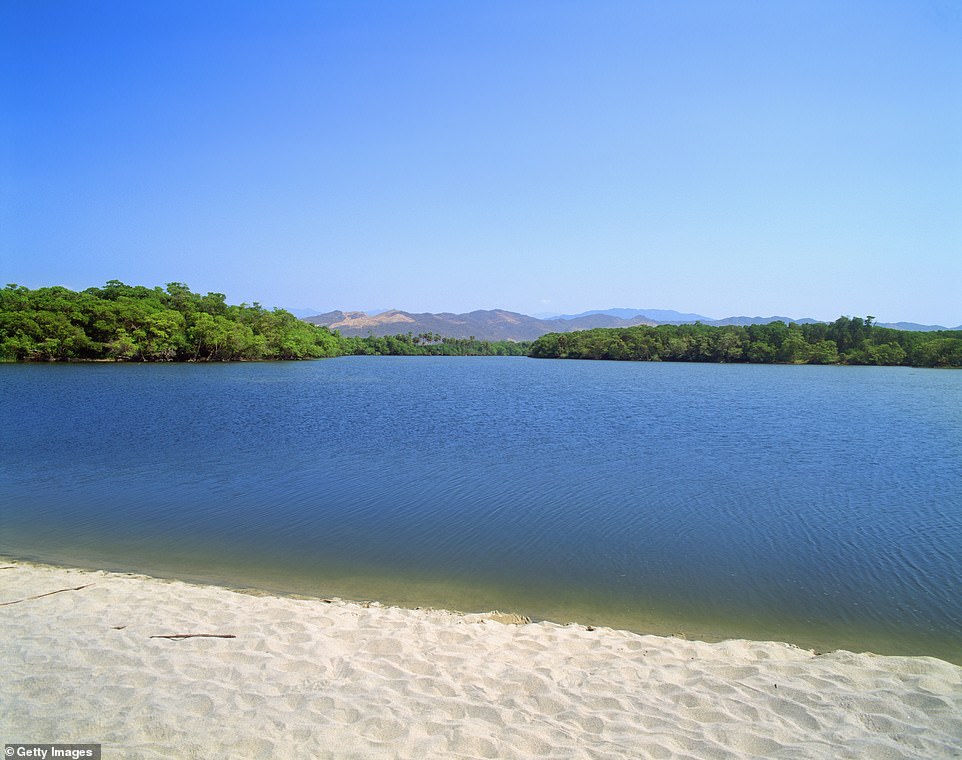 Georgia added that she had checked with the tour guide whether it was a safe place to swim before she and her sister went into the water. Pictured: Manialtepec Lagoon

‘They took the tube out of her. She has been on her own very well.

‘However she can’t talk because of the soreness in her throat from the tube.

‘They [medical staff] said that when they were explaining the procedure to her before they did it that she comprehended and understood everything.

‘She recognised me and knew who I was.

‘She seemed happy to see me and she is doing much better.’

Georgia added that she had checked with the tour guide whether it was a safe place to swim before she and her sister went into the water.

But the guide, who it later emerged is unlicensed and inexperienced, said the area was safe to swim.

Georgia said: ‘It was terrifying.’ 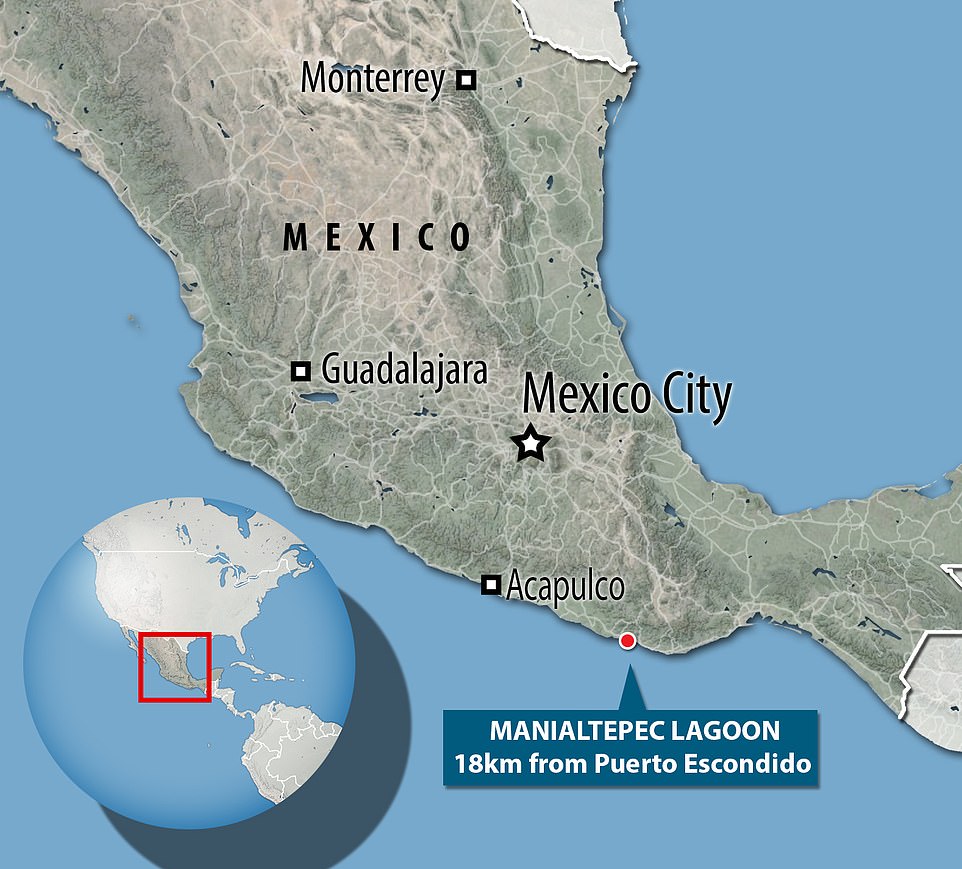 One of her friends described how Georgia scrambled onto mangroves at the edge of the water to call for help.

A local boatman Lalo Escamilla came to their rescue.

He said: ‘I pushed through the undergrowth using my oar.’

Lalo chastised the rogue guide known as Richie, who had taken the sisters in the jaws of the crocodile.

He said: ‘They’re not guides. They’re not federally-approved experts, they don’t know this place. That’s the problem.’ 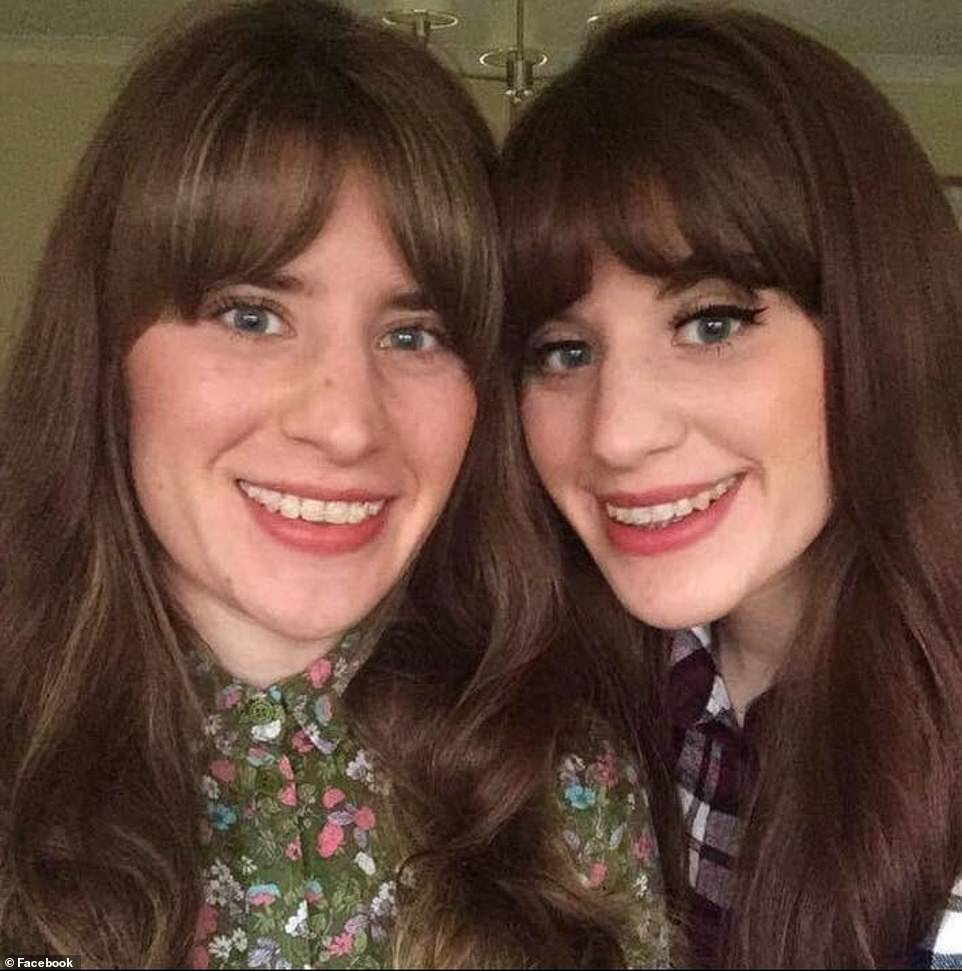 Georgia said: ‘It wasn’t until the nurse opened my fist to clean my hand that I realised that it had been slashed too,’ Georgia said.

The 28-year-old described the harrowing moment she had to call her parents at 4am to tell them her twin had been attacked by a crocodile.

And then how she had to phone hone again when doctors told her that Melissa was fighting for her life after her condition got worse.

She said: ‘When they told me her condition was deteriorating, I had to let the family know.’

But she told of the family’s relief when Melissa’s medical condition improved.

Georgia praised the work of the Mexican doctors to save her sister and the support of British Embassy staff.