Piers Morgan has unleashed a blistering attack on Donald Trump for ratcheting up his populist tactics during a time of national crisis.

The broadcaster, who is a long-time friend of the President, urged Trump to tone down his characteristic firebrand rhetoric and act statesmanlike.

He warned that continuing to exploit the coronavirus emergency to draw political battle lines would cost the President the election in November.

Trump has been roundly criticized for using his White House press briefings to pick fights with journalists, lash out at state governors and brag about how well he has handled America’s epidemic.

Yet the President has insisted attacks on his administration are unfair, and claimed his efforts have saved thousands of lives.

Morgan waded into the debate in an interview with CNN, where he offered a withering assessment of the President’s leadership.

Watching the briefings with ‘mounting horror’, he said: ‘He’s turning these briefings into self-aggrandizing, self-justifying, overly defensive and politically partisan – almost like a rally to him. 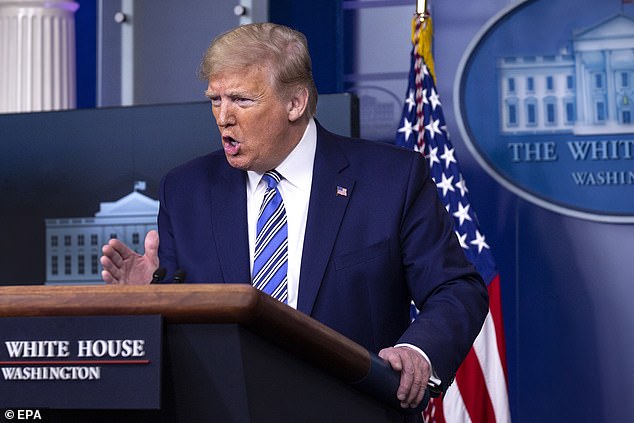 While most world leaders have seen a bounce in popularity since the epidemic unfolded, Trump’s approval ratings have slipped.

Morgan, who won Trump’s Celebrity Apprentice in 2007 and has since bagged the only British interviews with him in his capacity as Good Morning Britain’s co-presenter, laid out his advice to the President.

‘On almost every level of that, Donald Trump at the moment is failing the American people.’ 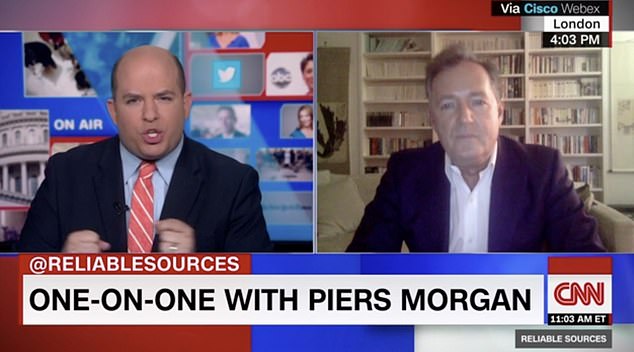 Morgan waded into the debate in an interview with CNN , where he offered a withering assessment of the President’s leadership

He continued: ‘You will win the election in November if you get this right. If you stop making it about yourself and make it about the American people and show that you care about them over yourself, you will win.

‘And, conversely, you will lose the election in November if you continue to make it about yourself, you continue playing silly politics, continue targeting Democrat governors because that suits you for your electoral purposes.’

Last week, Trump was accused of having a ‘meltdown’ after he scolded reporters for challenging him on his assertion that the President commands ‘total authority’.

Trump had insisted it would be him, and not state governors, who would decide when to lift the shutdown, but he later rowed back on this.

Morgan, who has given mixed views of Trump since he entered the Oval Office in 2016, was equally scathing in a column for DailyMail.com last week.

He wrote: ‘From the start of this crisis, President Trump has tried to rely on his usual political methodology – attacking opponents, trashing the ‘fake news’ media, blaming anyone and everyone but himself, pretending things are better than they are, and congratulating himself repeatedly for making all the right decisions.

‘But his tactics aren’t working this time, because Americans are dying in their droves from coronavirus at a rate faster than anywhere else in the world, and they’re seeing the stark, horrific reality in the shape of mass open-air graves being prepared and field hospitals being set up in parks.

‘They’re also seeing the US economy tank like never before, jobs being destroyed in historically bad numbers, and vast swathes of the American public being plunged into poverty, homelessness and misery.

‘This is as bad as it gets; a grim Ground Zero for most Americans who’ve never had to even contemplate such terrible hardship, let alone actually endure it.

‘Yet every day their President pops up for several hours on TV to pontificate about how it’s not really that bad, how things will all bounce back quickly, and how he couldn’t possibly be doing a better job.’