Plastered again, Mr Juncker? EU Commission chief shows off a cut on his cheek to Theresa May (who insists she HAS made progress on the Irish backstop amid signs her deal could go before MPs within days)

By Daniel Martin And David Churchill For The Daily Mail

Theresa May insisted she had made progress on the Brexit backstop last night amid signs that her deal could be put back before MPs next week.

The Prime Minister spoke after flying to Brussels for talks on the legal assurances she believes she needs to secure parliamentary approval for her withdrawal agreement.

She was even pictured sharing a rare laugh with Jean-Claude Juncker – when the EU Commission head showed her his plaster-covered shaving wound on his cheek.

Mrs May’s official spokesman said she wanted to bring the deal back before Parliament ‘as soon as possible’.

Sore point: Jean-Claude Juncker shows Theresa May where he cut himself shaving 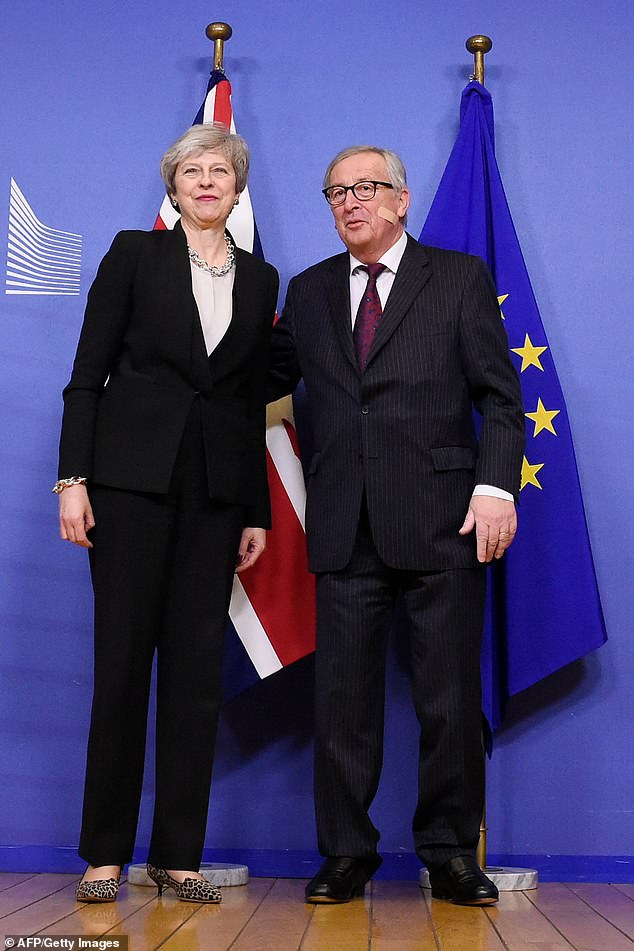 Senior diplomats said last night Brussels was likely to accept additions to the agreement but any changes would fall short of putting a time limit on the backstop or giving Britain a unilateral exit from it. Instead, it is likely to be a legal assurance that the backstop is temporary.

Downing Street announced yesterday that Mrs May would fly to Sharm El Sheikh in Egypt on Sunday where EU leaders will discuss the way forward on the sidelines of a summit with Arab leaders.

May and Juncker share rare laugh after December row

They‘ve fallen out before – although never more than an ugly war of words.

The way Jean-Claude Juncker showed Theresa May an injury to his left cheek tonight it seemed they really might have come to blows this time.

However, the EU Commission head was simply pointing out where he had cut himself as a result of a shaving accident.

‘You will have seen that I have on the side of my face the outcome of an unfortunate slip this morning,’ he said.

‘I don’t want you to think Mrs May is responsible for this injury on my face.’ At times, the pair have endured a frosty relationship during Brexit talks.

Last December Mrs May confronted Mr Juncker after he was accused of branding her ‘nebulous’.

Mr Juncker insisted they’d made up and Mrs May even kissed him. He claimed he had used the word ‘nebulous’ to describe the Brexit debate in Britain generally.

The leaders were today meeting in Brussels for more Brexit negotiations.

Officials said it was unlikely a deal would be formally reached at the meeting because that would require a full council of all 27 EU countries.

But they hope enough progress on the backstop will be made to allow Mrs May to call a new meaningful vote in the Commons next week. She hopes a legal assurance that the Irish backstop will not be indefinite will be enough to secure parliamentary approval for her deal.

Speaking after her meeting yesterday with European Commission president Jean-Claude Juncker, the Prime Minister said the pair had made progress.

‘I’ve had a constructive meeting with President Juncker,’ she added. ‘I’ve underlined the need for us to see legally binding changes to the backstop which ensure it cannot be indefinite – that’s what is required if a deal is going to pass the House of Commons.

‘We’ve agreed that work to find a solution will continue at pace. Time is of the essence and it’s in both our interests that when the UK leaves the EU it does so in an orderly way.’

Attorney General Geoffrey Cox and Brexit Secretary Stephen Barclay will travel to Brussels today to continue work on an additional legal instrument to address concerns over the backstop.

Spain’s foreign minister, Josep Borrell, yesterday confirmed both sides were in the process of ‘hammering out’ a solution.

He played down the idea of the EU reopening the current withdrawal treaty, saying: ‘The EU’s position is that the treaty won’t be reopened but can be interpreted or complemented with explanations that may be satisfactory.’

Last night senior diplomats in Brussels said it was possible the EU Commission could accept additions being made to the withdrawal agreement, but that they would not include a time limit on the backstop. They stressed they do not believe a breakthrough is imminent and that a resolution will not be reached before next week. 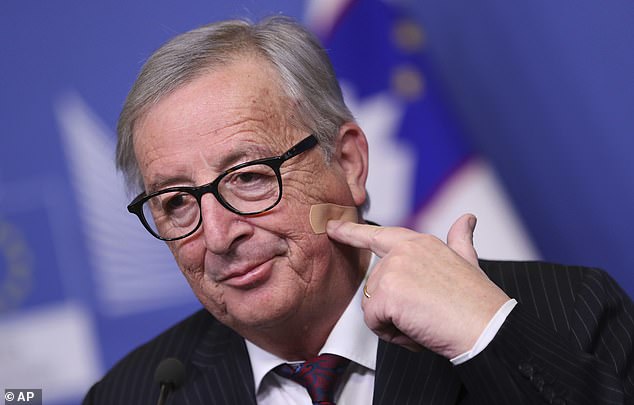 Juncker points to his cut as the leaders met in Brussels today for more Brexit negotiations. 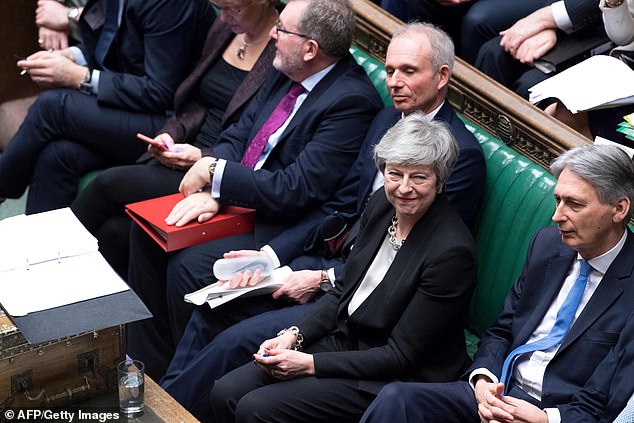 They added they do not believe the changes will satisfy Mrs May’s backbench Brexiteer MPs and that she will have to rely on trying to win Labour votes.

Foreign Secretary Jeremy Hunt said the key to getting a deal approved by MPs was securing changes that would allow Mr Cox to alter his legal advice that the UK could potentially be trapped in the backstop indefinitely.

Speaking in Berlin as part of the Government’s intense diplomatic offensive, Mr Hunt said: ‘I am confident… that if we solve the issue of the backstop we can pass this deal through Parliament.’

Senior officials said the PM will be attending a two-day EU-League of Arab States summit in Sharm el Sheikh starting on Sunday but stressed they were not expecting any decisions relating to the Brexit negotiations.