PLATELL’S PEOPLE: Yes! William is the new Prince of Meddling

Prince William is certainly a man of his word. In the TV documentary marking Prince Charles’s 70th birthday, Wills said he admired his father’s work but insisted that he wanted to do things his own way.

This week he showed what he meant by attacking social media giants such as Facebook for failing to stop online abuse. He also launched a smartphone app designed to protect children against cyberbullying.

Despite their enormous wealth and privilege, William and his down-to-earth wife Kate have put their fingers on one of 21st century society’s most pernicious evils, the persecution of youngsters, often by their classmates, on social media.

Wills’s frustration with the tech giants is evident. Over the past year he has been challenging them to ‘partner with parents to make the online world a safe place of discovery, friendship and education’.

Yet these monoliths’ appalling response has been to question the scale of the problem and rake in their billions as ‘bile and hate’ spews out online to impressionable and vulnerable children.

Undeterred, the Prince urged them: ‘Surely together you can harness innovation to allow us to fight back against the intolerance and cruelty brought together by your platforms.’

That will be music to the ears of Lucy Alexander, whose son Felix killed himself, aged just 17, after years of online bullying. Like most parents she was unaware of the gravity or viciousness of the abuse. 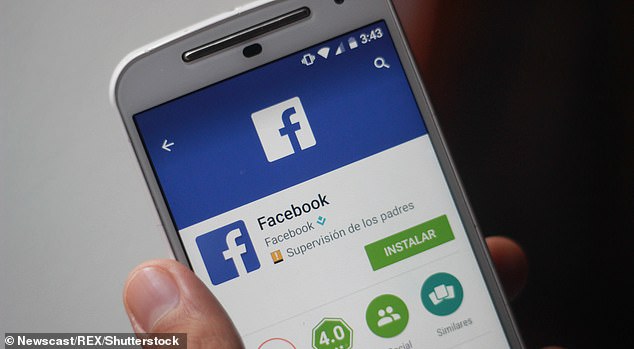 William and his down-to-earth wife Kate have put their fingers on one of 21st century society’s most pernicious evils, the persecution of youngsters, often by their classmates, on social media, including Facebook [File photo]

She told her heartbreaking story in the Mail this week — commendably accepting that, while the internet companies must act, ‘we all have to play a part: parents, teachers, children’ to stop others like Felix dying.

Shocking reports show that 35 per cent of 11- to 17-year-olds have been victims of cyberbullying.

Perhaps William is a chip off the old block after all. His father’s Prince’s Trust has helped more than 870,000 young people out of a life of despair.

And now we have William helping youngsters in his own way. 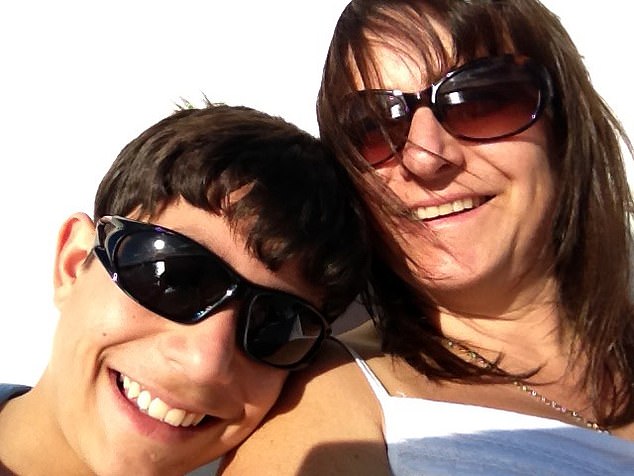 That will be music to the ears of Lucy Alexander, whose son Felix killed himself, aged just 17, after years of online bullying. Like most parents she was unaware of the gravity or viciousness of the abuse

Along with Kate who, to her credit, came up with the original plan for the Heads Together initiative helping young people with mental illness that lead on to their Taskforce on the Prevention of Cyberbullying, he has a lifetime to take on this modern scourge.

Like dad, perhaps William will prove to be a really ‘meddlesome Prince’. I do hope so.

Liz out on the town again

Eyes were on stalks when Liz Hurley turned up at a Thanksgiving dinner thrown by the U.S. ambassador (no wonder he’s smiling) wearing a shoestring black tie and a dress slashed to her navel exposing her wonderful assets. 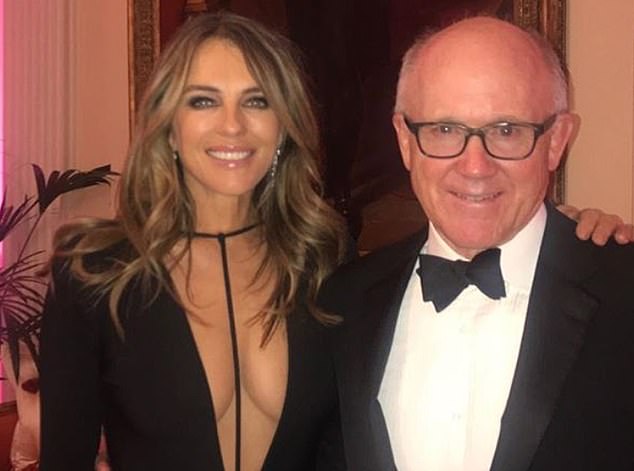 Liz Hurley turned up at a Thanksgiving dinner thrown by the U.S. ambassador Woody Johnson

What’s not to love? Liz’s cleavage always cheers us up, although I wondered at her claim that her 53-year-old breasts are so perky and firm because . . . she goes on long walks. 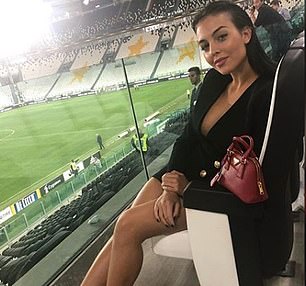 Georgina Rodriguez, above, will marry Ronaldo. Well done to his PR team and good luck to the couple

A wedding is imminent and she’s trying on dresses.

Well done to his PR team and good luck to the couple.

But no amount of ‘devoted family man and all round good guy’ gloss will detract from the rape charges he is facing — and denies.

Of his 35-year marriage to Patti, Rolling Stone Keith Richards says when he met her his heart went ‘boom’ and it hasn’t stopped since. 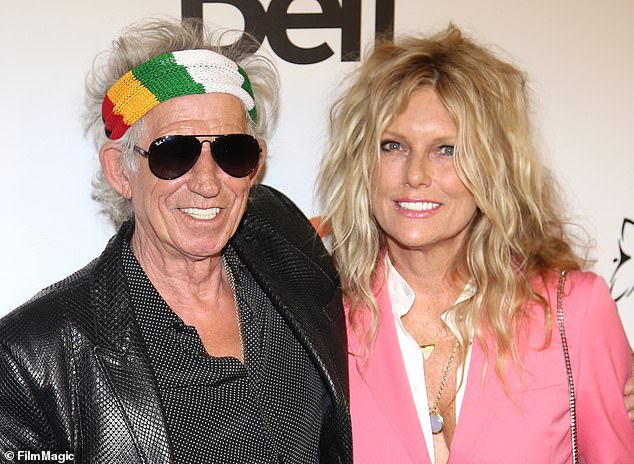 In Mick’s case, it’s not just his heart that goes ‘boom’ every time he meets a fertile woman.

Insisting she would fight on, a defiant Mrs May compared herself to England cricketer Geoff Boycott ‘who stuck to it and got the runs in the end’. He was also known for running out his team-mates. 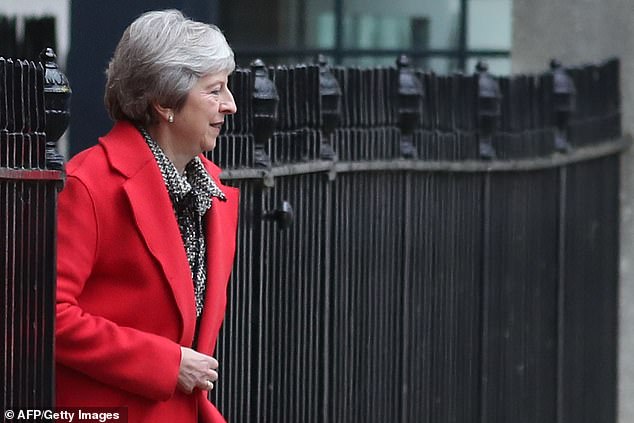 Theresa May leaves Downing Street yesterday as political chaos unfolded. My favourite comment came from Mick in Cornwall, who said: ‘Mrs May’s deal reminds me of Dunkirk…without the boats’

I had thought Jacob Rees-Mogg was such a gentleman. Taunting the PM with his ‘no confidence’ letter, of which 48 are required to trigger a leadership challenge, during her gruelling Commons Brexit debate was unchivalrous.

And it backfired, in that it had many of us (especially women) reaching for our trusty scabbards to defend the beleaguered PM.

I knew Esther McVey was going to resign from Cabinet when I saw her walking into No 10, her coiffured blonde hair ramrod straight — she’d clearly had a resignation blowdry.

Never have I known such political instability, with both Remainers and Brexiteers stopping me in the street and asking: ‘What the hell is going on?’ As if any of us knows.

My favourite comment came from Mick in Cornwall: ‘Mrs May’s deal reminds me of Dunkirk . . . without the boats.’

As I’ve asked before, why is no one helping poor Megs in her role as Duchess of Sussex.

She turned up at the Westminster Abbey Remembrance service in one of her cutaway shoulder numbers.

We don’t do bare collarbones in church. Then for Charles’s 70th birthday snaps, no one told her she should have been wearing long sleeves, like Kate and Camilla — and to check with her stepmother-in-law to ensure they both didn’t wear white.

If it goes on like this, it’ll end in tears. 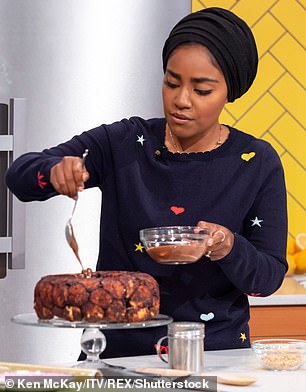 Bake Off star Nadiya Hussain has suffered from anxiety all her life and finds it difficult to explain to her children why mummy is often sad and can’t get out of bed.

‘It’s really hard for me to be where I am and do what I do.

‘I’m brown, I’m a woman and I’m a Muslim, so every time I do something there’s an element of, “You have to prove yourself”.’

We don’t notice your colour or your faith Nadiya, just a lovely mum treasured by millions who feel they know you.

This year’s crop of Christmas TV ads has been met with a lukewarm reception. So why didn’t any of the big stores grab the footage from David Attenborough’s new series, Dynasties, where emperor penguins were built a ramp by the TV crew so they could escape an icy ravine with their newborn chicks still cradled on their feet?

Born not in Bethlehem but Antarctica, no manger but a frozen canyon, searching for shelter, and rescued by the kindness of strangers.

No guiding star or three wise men, but a story befitting the timeless Christmas message of birth, family, endurance and hope.

The Spice Girls, minus Posh, tried to put on a sisterly act on The Jonathan Ross Show plugging their reunion tour.

Anyone could see they can’t stand each other. 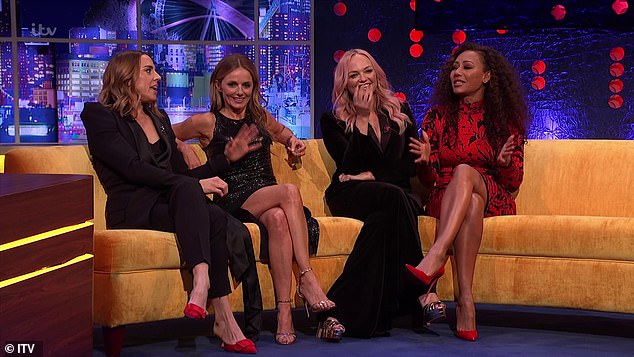 The Spice Girls, minus Posh, tried to put on a sisterly act on The Jonathan Ross Show

Sporty was bored, Scary annoyed, Baby a giggling idiot and irritating Ginger not ginger any more.

They did have one thing in common, though — gleaming pound signs in their eyes.

On Wednesday, I went to a preview of magician Dynamo’s new show at The Abandoned Room, a spellbinding mix of his journey through decades of crippling illness and the magical power of self-belief.

There was no such big-heartedness from one guest who stopped me and said: ‘Great to see you here, Amanda, I do hope Dynamo saws you in half.’

That was such a heavy landing 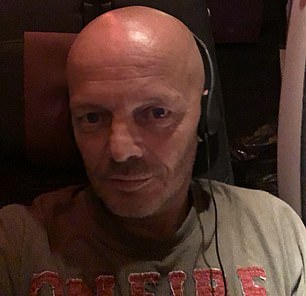 Stephen Prosser, above, is suing BA for sitting him next to an overweight passenger

A businessman is suing British Airways claiming he suffered serious back injuries after being crushed by a 23st passenger sitting next to him. The 13-hour flight left him in agony.

While I have the greatest sympathy for the morbidly obese, surely alongside the size racks airlines use to check your carry-on luggage, there should also be one for over-sized passengers.

And if they can’t squeeze their bottoms in, they should be forced to stump up for two seats — or be placed in the hold with a warm blanket.

A new survey claims women who are unlucky in love should blame their mothers as we repeat their behaviour in terms of commitment.

Try convincing my mum of that — she celebrates her 70th wedding anniversary in February, while I, her only daughter, divorced 30 years ago.

The producers of Poldark, making a biopic of Philip Green, have ruled out having Aidan Turner play the disgraced Topshop boss, especially for the topless beach and yacht scenes. Danny DeVito, on the other hand…