The astonishing story of a 20-year-old Liverpool plumber who survived both the Battle of the Somme and Passchendaele to make it back to his sweetheart has been revealed by his proud son.

Horace Edward ‘Ted’ Nash went through a series of near-death experiences, including having a bullet ricochet off his belt buckle, dodging a low-flying bomber and gunning down a group of enemy soldiers while out looking for booby traps.

Some of the terrifying details of Ted’s brushes with death are told in a series of love letters to his darling, Joan, which were written in the trenches and included pressed flowers from the front. 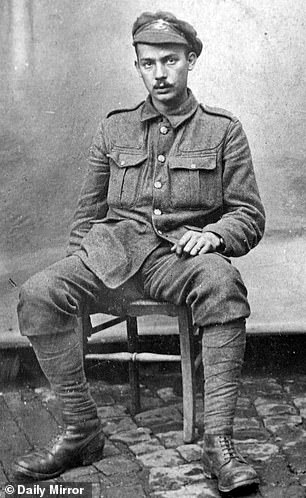 Horace Edward ‘Ted’ Nash is seen as a fresh-faced young soldier in 1914 (left). Yet four years later in 1918 he resembled a haunted veteran (right)

His 82-year-old son, Ian, had never opened them before because he felt he would be intruding, and found himself moved by his father’s recollections of his life on the frontline. ‘I’ve been to Ypres, to Sanctuary Wood, and seen all those war graves – and one could so easily have been my dad,’ he told The Daily Mirror.

A photograph of Ted when he signed up shows a fresh-faced youth, and yet after just four years he appears as a haunted veteran – his complexion sallow and the corners of his mouth turned down.

That is a reflection of the terrifying four years he spent fighting in the First World War from 1914 to its end in 1918, which is being marked this year as the 100th centenary.

A member 19th Battalion, the King’s Regiment (Liverpool), Ted and his comrades had his first major brush with danger while he was writing a letter to Joan near a French church in March 1916.

As he recounts in the despatch, a German plane flew low over his head and began dropping bombs. The plane passed but then returned soon later, by which time Ted had just managed to reach the relative safety of the dugout.

Four months later, Ted made it through the Battle of the Somme, during which a million men were wounded or killed. 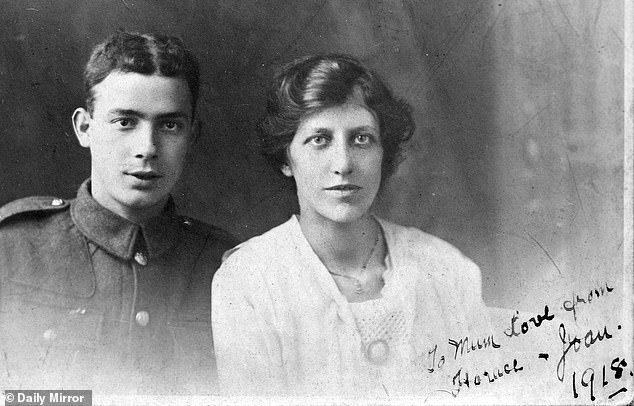 Battle of the Somme: One of the deadliest fights in history

Lasting 141 days, the Battle of the Somme was the bloodiest battle of the First World War.

It is estimated 24,000 Canadian and 23,000 Australian servicemen also fell in the four-month fight.

The British and French joined forces to fight the Germans on a 15-mile-long front, with more than a million-people killed or injured on both sides.

The Battle started on the July 1, 1916, and lasted until November 19, 1916. The British managed to advance seven-miles but failed to break the German defence.

On the first day alone, 19,240 British soldiers were killed after ‘going over the top’ and more than 38,000 were wounded.

But on the last day of the battle, the 51st Highland Division took Beaumont Hamel and captured 7,000 German prisoners.

The plan was for a ‘Big Push’ to relieve the French forces, who were besieged further south at Verdun, and break through German lines.

Although it did take pressure off Verdun it failed to provide a breakthrough and the war dragged on for another two years.

Then, in 1917, the young soldier was at Ypres in western Flanders when a bullet struck his belt buckle. Seemingly aware of his astonishing fortune, he took another bullet and carved a cross on it as a lucky charm.

A brief pause in Ted’s duties allowed him to take leave in Britain and marry Joan, but months later he was back on the front for the Battle of Passchendaele. That hellish encounter cost the lives of 325,000 Allied troops, but Ted survived.

Yet perhaps his most dangerous encounter came shortly before the Armistice, when he was out with his friends clearing booby traps when he came across a group of German soldiers.

‘Horace rushed forward with his Lewis gun and wiped them out,’ an officer recounted in a letter to Joan.

Ted received four medals for his bravery during the conflict.

A 103-year-old veteran who was blinded during the Second World War will be the oldest to march at the Cenotaph as Britain marks the centenary of Armistice.

Former Army sergeant Ron Freer, from Kent, will lead more than 100 comrades who also lost their sight when he attends the memorial in London on Sunday.

He said it is a ‘huge honour’ as the Remembrance commemorations hold a ‘special significance’ for him because his own father died in battle on September 4, 1918. 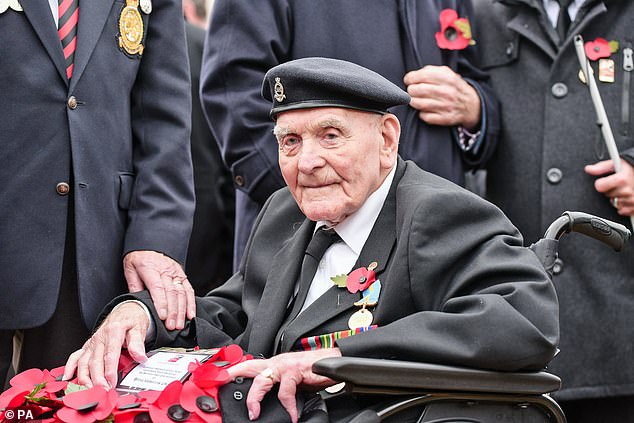 Former Army sergeant Ron Freer, from Kent, will lead more than 100 comrades who also lost their sight when he attends the memorial in London on Sunday

The former postmaster paid his respects at his father’s graveside earlier this year when he travelled to the Dernancourt Communal Cemetery in France with his family to lay a wreath.

Mr Freer will be representing charity Blind Veterans UK this Sunday. The Royal British Legion confirmed he is the oldest veteran due to attend.

Born in Teignmouth, Devon, on October 21 1915, Mr Freer was captured in the Second World War while serving as a soldier with the Royal Artillery.

He joined up in 1931 aged 15 initially with the Royal Horse Artillery and on the outbreak of war was posted to defend Hong Kong. 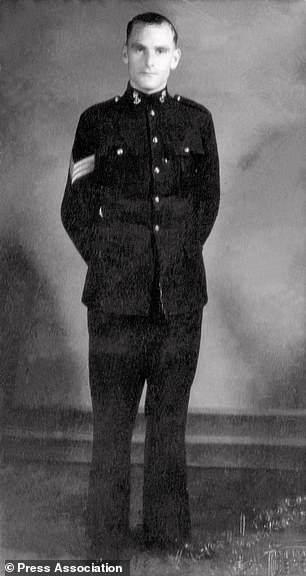 Mr Freer in uniform. He will be representing charity Blind Veterans UK this Sunday

In late 1941, the Japanese attacked the then British colony and Fort Stanley, where Mr Freer was based.

After 18 days of fighting, his garrison was forced to surrender and he remained a prisoner of war until the end of the conflict.

The malnutrition he endured at the camp during the four-year ordeal left him blind.

Mr Freer said: ‘The camp was situated on the edge of the harbour with high fences all around.

‘The Japanese brought in a bag of rice for each unit but only enough for one meal a day per man. We cut an oil drum in half and used the bottom as a boiling pot for the rice.

‘Each man was given a scoop of rice but many were unable to eat it and looking at the portion of rice, one could see mice droppings and insects.

‘Disease soon broke out, resulting in many deaths.’

In 1943 he was among 2,000 prisoners taken by a ship called The Lisbon to Japan when infectious disease diphtheria broke out.

His life was saved by the actions of two doctors.

Mr Freer said: ‘Lying in the hut with all the others suffering, I heard a voice say, ‘Turn over sergeant’, I was then injected with something and the voice said, ‘You are very lucky’. 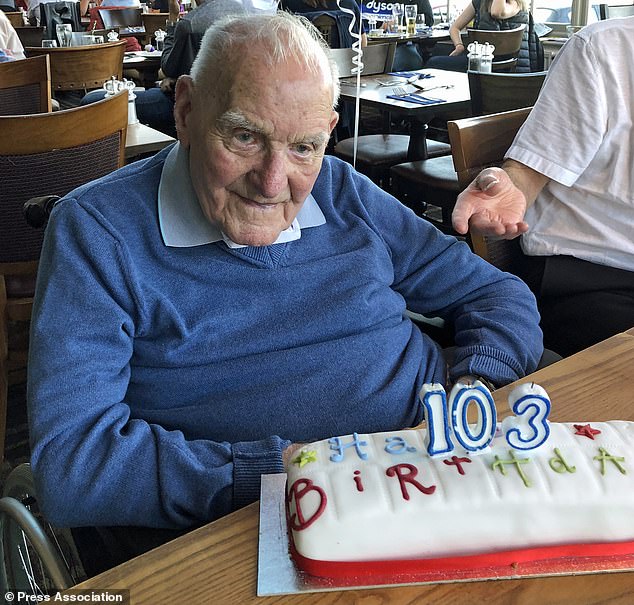 Ron Freer will be the oldest veteran to attend the Cenotaph on Sunday for the remembrance service. He said it is a ‘huge honour’ as the Remembrance commemorations hold a ‘special significance’ for him because his own father died in battle on September 4, 1918

‘I knew then that it was our medical officer. He later told me that a Japanese civilian doctor had managed to smuggle in six phials of anti-diphtheria toxin so the two of them had saved my life.’

He lost his sight completely a month later as well as most of his hearing and spent the rest of the war in the camp’s medical hut. 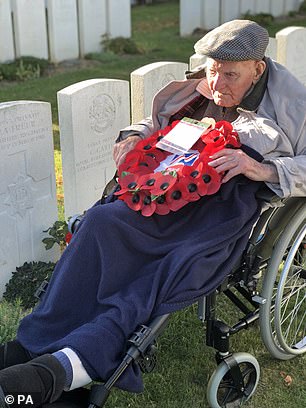 Mr Freer laying a wreath of his father’s grave

Once the war was over, he was able to return to the UK via the Philippines and New Zealand.

Blind Veterans UK, which was founded as St Dunstan’s after more than 3,000 veterans were blinded in the First World War, has supported Mr Freer since 1946.

Initially lacking optimism for the future, his confidence returned as he set about getting a job and learning braille thanks to the charity.

After marrying, he and his wife Joan opened a post office, buying the property with the help of the organisation.

Over the years they ran post offices in Ilfracombe, Devon, Grays in Essex and Gravesend in Kent.

He now lives with his daughter Patricia in Cliftonville.

Mr Freer said: ‘Having lost my sight as well as my hearing, my future seemed very dismal and I didn’t want to think about what lay ahead.

‘It is an extraordinary charity which makes an unbelievable difference to the lives of veterans like me, and our families too.’

Teacher, 60, who was flicking through World War One book spotted her own grandfather in classic photo of stretcher bearers during Battle of Passchendaele in the trenches

A teacher spotted her own granddad in a school book about World War One.

The picture was taken in Ypres, Belgium in 1917 and shows William Ensor carrying an injured soldier on a stretcher through a muddy battlefield during the Battle of Passchendaele.

Kathryn Robyns spotted the photo of William, who was a stretcher bearer in the army, while working at Ysgol Uwchradd Bodedern school in her hometown. 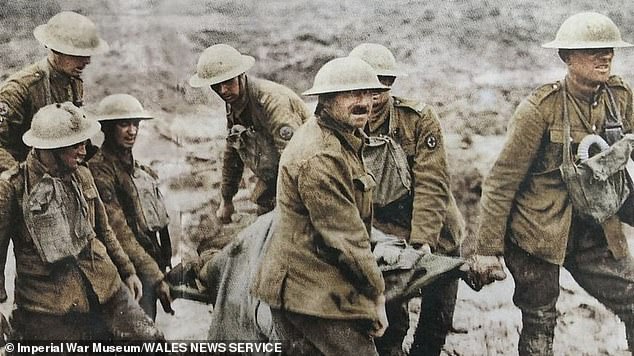 William Ensor is seen fourth from the left at the Third Battle of Ypres, Passchendaele, on 17 August 1917. The original photo  has since been digitally coloured by the Imperial War Museums, a collection of five museums across the UK which record and showcase experiences of modern conflict

Passchendaele: An Allied victory for barely any military gain

The Battle of Passchendaele became notorious not only for the sheer number of casualties, but also for the horrendous fighting conditions the men were forced to endure.

British general Douglas Haig had long wanted the allies to launch an offensive on German positions in Flanders Fields to break through to the Belgian coast. 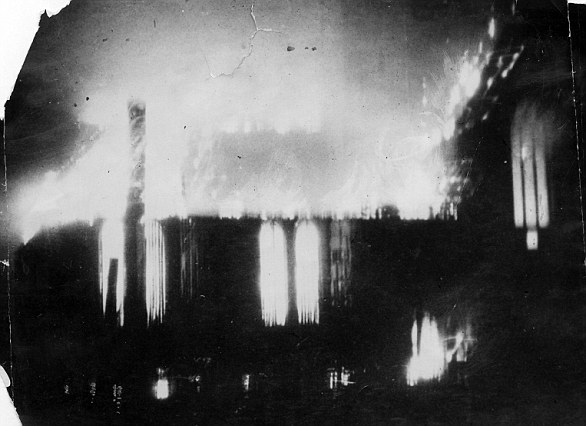 A church ablaze during the Battle for Messines Ridge in 1917, which immediately preceded Passchendaele

On July 31, after two weeks of sustained shelling which had seen more than 4.5 million shells dropped on German positions, the allies launched their infantry attack.

But the plan was a disaster from the get-go. The shelling had not destroyed the German defenses, and within a few days some of the heaviest rains for 30 years had turned the battlefield into a quagmire, trapping thousands of men and horses.

The attack resumed on August 16 but to little effect, and both sides remained at a stalemate until September 20, when an upturn in the weather allowed allied forces to win three key battles at Menin Road Ridge, Polygon Wood and Broodseinde in the space of two weeks.

These victories eventually led to British and Canadian forces taking what was left of the village of Passchendaele on November 6, but the capture came after an estimated 325,000 allied casualties.

Kathryn, of Anglesey, North Wales, said: ‘I realised immediately that my grandfather was in the picture.

‘He always said that he didn’t want to go to war to kill and the best way he could help the cause was to go as a stretcher bearer.’

Mr Ensor did not talk about his service but he featured in photos which became iconic among war records.

The Battle of Passchendael, officially known as the Third Battle of Ypres, Passchendaele – became famous for the scale of casualties and the amount of mud on the battlefield. 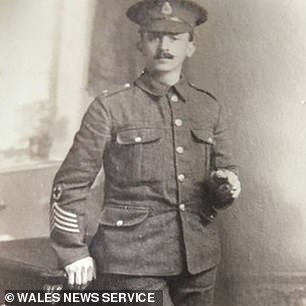 Mr Ensor was a stretcher bearer in World War One. He enlisted in January 1915

The photo was taken on 1 August 1917 by Lt John Warwick Brooke – an official photographer for the British Army.

The photograph has since been digitally coloured by the Imperial War Museums.

Kathryn, who is now retired, said her grandfather, also from Anglesey, was sent to the Western Front after completing basic first aid.

She said: ‘My grandfather was a hero to us – not because of his service but because he was extraordinarily kind.

‘He never talked much about the war, but I do remember that every year on Armistice Day, he would crave company and I’d sit with him then many times.

‘The one thing he would say that hit him most was losing friends.’

Kathryn said: ‘He was a very special man and it was very moving to spot him..’ 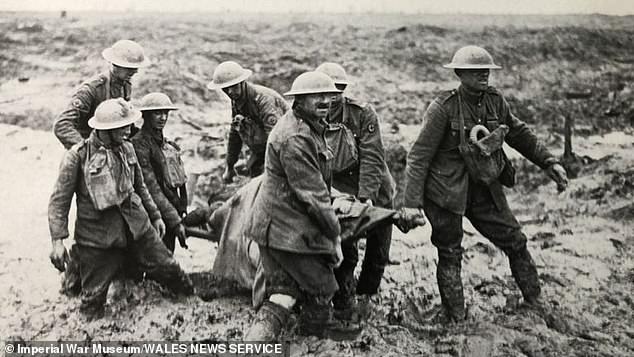