Prime Minister Narendra Modi’s visit to Myanmar has once again underlined why New Delhi struggles to maintain a delicate balance between its strategic interests and its democratic ideals when it comes to its neighbour.

This visit came at a time when the Myanmar government and Aung San Suu Kyi are facing global condemnation for their handling of the Rohingya crisis in a repeat of what had happened five years ago during a military campaign that displaced more than 1,00,000 Rohingyas.

But this time the scale of the crisis is huge and Suu Kyi’s reputation is at stake. The United Nations has warned that up to 3,00,000 Rohingyas could stream into neighbouring Bangladesh as they flee ‘clearance operations’ by Myanmar’s armed forces.

For her part, Suu Kyi has blamed ‘terrorists’ for ‘a huge iceberg of misinformation’ and has refused to take a conciliatory position.

In her first remarks since the crisis started in Rakhine state last month, Suu Kyi has suggested that her government was facing its ‘biggest challenge’.

‘It is a little unreasonable to expect us to solve the issue in 18 months,’ she said. ‘The situation in Rakhine has been such since many decades. It goes back to pre-colonial times.’

Though she made it clear that the government needed to ‘take care of everybody who is in our country, whether or not they are our citizens,’ she also underlined that ‘our resources are not as complete and adequate as we would like them to be but still, we try our best and we want to make sure that everyone is entitled to the protection of the law.’

Suu Kyi does not control the military and there continues to be a trust deficit between the two. 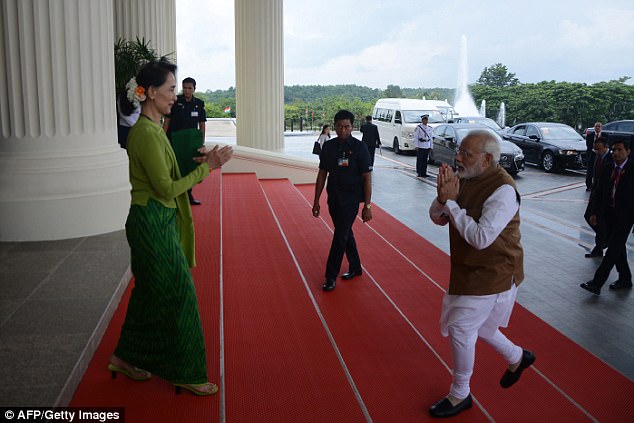 But her refusal to condemn military abuses against Rohingyas provides the generals with political cover.

Myanmar is negotiating with China and Russia to ensure they block any UN Security Council censure over the violence that has forced an exodus of nearly 1,50,000 Rohingya Muslims to Bangladesh in less than two weeks.

Bangladesh has expressed its concerns about Indian position on Rohingyas which led New Delhi to issue a statement acknowledging that there is an ongoing refugee crisis in the region.

The statement said: ‘India remains deeply concerned about the situation in Rakhine state in Myanmar and the outflow of refugees from that region.’

During PM Modi’s visit to Myanmar this week, New Delhi did not directly engage with the issue of Myanmar’s treatment of its Rohingya Muslim minority. 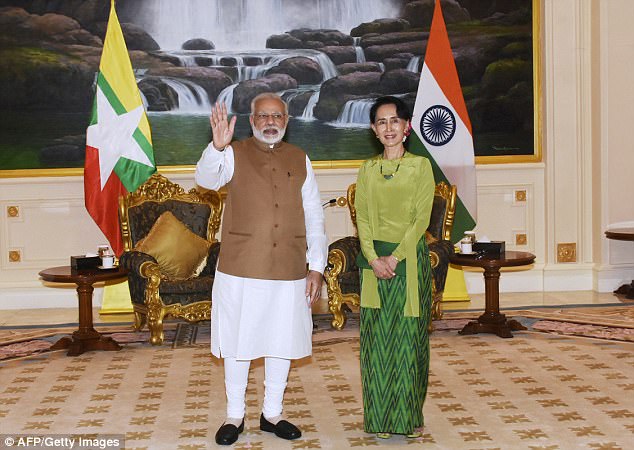 But at a time when Myanmar is getting isolated, India underlined its support with its joint statement: ‘India condemned the recent terrorist attacks in northern Rakhine state, wherein several members of the Myanmar security forces lost their lives. Both sides agreed that terrorism violates human rights and there should, therefore, be no glorification of terrorists as martyrs.’

Perhaps because of this, Naypyidaw seems to have allowed India to provide aid in the form of infrastructure and socio-economic projects to Rakhine province where violence against Rohingya continues unabated.

India has significant geopolitical and security interests that continue to shape its outreach to Myanmar.

As China’s profile continues to rise in India’s vicinity, New Delhi would like to enhance its presence by developing infrastructure and connectivity projects in the country.

India has found it difficult to counter Chinese influence in Myanmar, with China selling everything from weapons to foodgrains there, and projecting power in the Indian Ocean will become an even greater challenge if China increases its naval presence in Myanmar.

No wonder, Myanmar is at the heart of the Modi government’s ‘Act East’ policy with the India-Myanmar-Thailand Asian Trilateral Highway, the Kaladan multimodal project, a road-river-port cargo transport project, and of course BIMSTEC, the Bay of Bengal Initiative for Multi-Sectoral Technical and Economic Cooperation.

Security India is also working closely with the security forces of Myanmar to target the insurgents operating in the Northeast.

India shares a 1,600-km border with Myanmar which has been very cooperative in flushing the Naga insurgents from its territory.

India would like to see the emergence of Myanmar as a robust democracy living in peace with its neighbours. But this is a long-term aspiration and India’s past engagement with Myanmar indicates that a hands-off policy has worked much to its advantage.

A harsh critic of the Myanmar junta since the mid-1990s, India muted its criticism and dropped its vocal support for the opposition leader Suu Kyi in order to pursue its ‘Look East’ policy aimed at strengthening India’s economic ties with the rapidly growing economies in East and South-East Asia.

More important to New Delhi has been China’s rapidly growing profile in Myanmar. As India realised that Myanmar was increasingly under China’s orbit, it reversed its decades-old policy of isolation and began to deal directly with the junta.

Interests India found it difficult to toe the Western line on Myanmar as it was stuck between the demands of its role as the world’s largest democracy and the imperatives of its strategic interests.

The large Burmese refugee community in India is a product of the 1998 military crackdown in Myanmar. Indian elites have long admired the freedom struggle led by Suu Kyi, who was honoured with one of India’s highest civilian awards in 1993.

But India’s strategic interests in Myanmar have become significant, especially as China’s trade, energy and defence ties with Myanmar have surged.

Strategic interests led Delhi to only gently nudge the Myanmar junta on the issue of democracy. India has gained a sense of trust at the highest echelons of Myanmar’s ruling elite. As such, India remained opposed to Western sanctions on the country.

Once Suu Kyi-led National League for Democracy won a majority in Myanmar’s first openly contested election in 25 years in November 2015, she became the state councillor and country’s foreign minister.

It allowed her to work closely with the military in crafting a new future for Myanmar and this enhanced India’s strategic space to manoeuvre.

And it is that hard-won strategic space that India is loath to give up. Modi’s visit has managed to reinforce that trend in India-Myanmar ties.