Police and Coastguard launch hunt for estate agent, 23, who disappeared from her Norfolk home today

Police and Coastguard launch desperate hunt for missing estate agent, 23, who disappeared from her Norfolk home in middle of the night

Police and the Coastguard have launched a desperate hunt for a young estate agent who disappeared from her Norfolk home early today.

Chelsie Dack, 23, was reported missing by her family at around 3am from her home in Gorleston-on-Sea near Great Yarmouth.

Members of her family and police teams have found no sign of her.

A Coastguard helicopter was this morning flying up and down the coastline. The Great Yarmouth and Gorleston lifeboat was launched as dawn broke.

Chelsie is described as white, of slim build, about 5ft 7ins tall, with bright pink shoulder length hair. Her mother Dawn Howell is appealing to the public for help.

Chelsie Dack (pictured), 23, was reported missing by her family at around 3am from her home in Gorleston-on-Sea near Great Yarmouth in Norfolk today

Chelsie is described as white, of slim build, about 5ft 7in, with pink shoulder length hair

Chelsie’s sister Olivia Dack added in another post: ‘Can anyone that has had recent contact with my sister Chelsie Dack please message me or call me! Please share x’.

Chelsie showed no sign of being under stress in her most recent Facebook post, when she thanked a person who had found her missing driving licence in the street and posted it back to her.

She also posted two selfies in which she smiled and put her tongue out. Her  mother replied: ‘Beautiful’.

She is described on her Facebook profile as a sales negotiator at Howards, which has an office in Great Yarmouth.

A Norfolk Police spokesperson said: ‘Police are concerned for the welfare of a 23-year-old woman reported missing from her home in Gorleston in the early hours of this morning (April, 20 2020).

‘Chelsie Dack was reported missing at 3am by her family; her disappearance is out of character and officers are concerned for her welfare.

‘She is described as white, of slim build, about 5ft 7, with bright pink shoulder length hair. Searches are being carried out in the local area and officers would like to hear from anyone who may have seen Chelsea of knows of her current whereabouts.

‘Anyone with information should contact Norfolk Police immediately on 101.’ 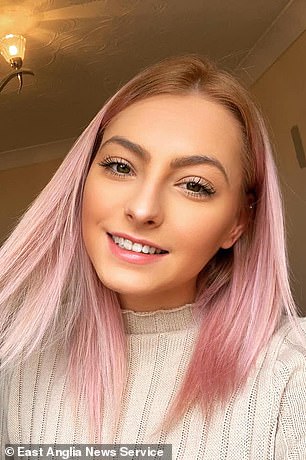 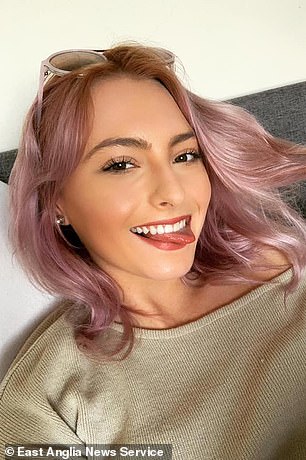