Police are hunting for thugs who deliberately set fire to an NHS worker’s car that was parked just 10ft away from where her three-year-old daughter was sleeping.

The family, from Bilton, Warwickshire, were left stunned by what police believe was a targeted attack – and scared that their daughter Darcie was so close to the danger.

Mr Cleaver is a former soldier who suffers from post-traumatic stress disorder and now works as a Sky engineer, and his wife is a therapy technician at Rugby Hospital.

Mr and Mrs Cleaver, who have been working during the lockdown, were playing a quiz on Zoom with friends when the attack took place on May 2 at 10.10pm.

Mrs Cleaver, 26, is now struggling to sleep, Darcie is having nightmares and Mr Cleaver, 32, a fusilier in the Army for ten years, has increased his PTSD medication.

Mrs Cleaver said: ‘We don’t know why it happened, we don’t know if they are going to come back. I am still petrified, it all happened so quickly and I still can’t believe it.

‘It’s just mad, we are terrified in our own home. I can’t sleep. Darcie woke up last night crying. She wanted to go to the back garden because she thought there was a fire. 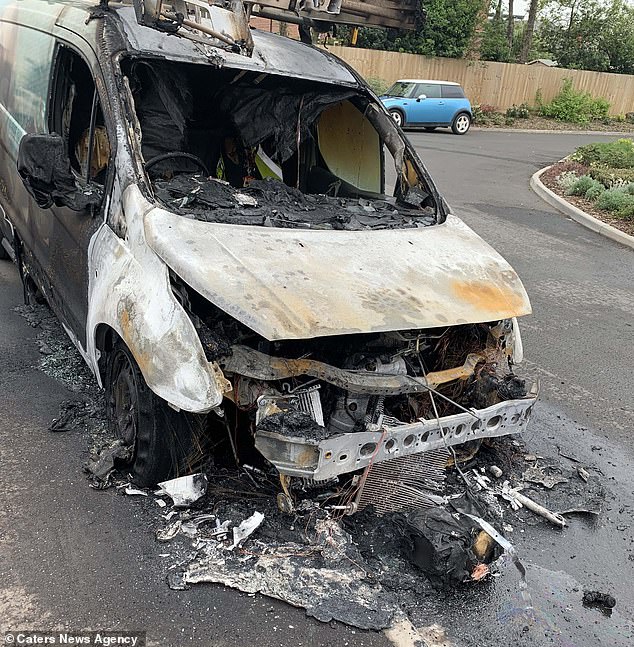 The damage done to Sky engineer Mr Cleaver’s van outside his home in Bilton, Warwickshire

‘Mat suffers from PTSD anyway – he had to go back to the doctors and get an increase on his tablets. It’s a long term effect, it’s really horrible.

‘Especially now with the lockdown, we have both been working really hard. What on earth we could have done that we are so unaware of to make someone that angry?

‘We just don’t know why and that’s what we keep asking ourselves.’

The family, who moved to their two bedroom, semi detached house in a cul-de-sac two years ago, said that it’s a ‘quiet, family place’.

So they could not believe seeing their black Ford Fiesta and Mr Cleaver’s work van burst into flames, right in front of their house, next to their daughter’s bedroom. 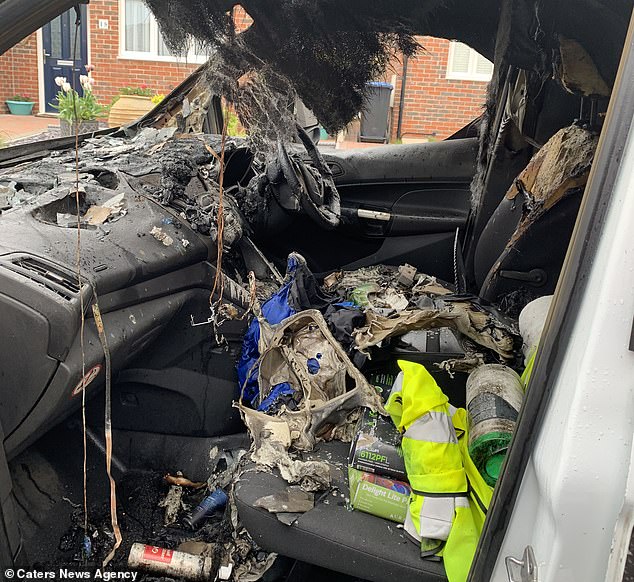 Mr Cleaver’s van burst into flames, right in front of their house, next to their daughter’s room

As Darcie was asleep upstairs, they had to quickly grab her and run to the back garden, while they waited for the fire brigade.

Mrs Cleaver’s car boot was filled with Darcie’s upcoming birthday presents – and she became three a few days later on May 6.

After the attack, the fire brigade had to install a special locked letterbox in the family’s house.

Mrs Cleaver added: ‘We were just chilling at home doing a virtual quiz, like everybody else. Normally we don’t live an exciting life – we are in bed by 9pm.

‘But luckily we were awake downstairs and Darcie was asleep downstairs. All we heard was this massive bang – I’ll never forget it, it was like an explosion. 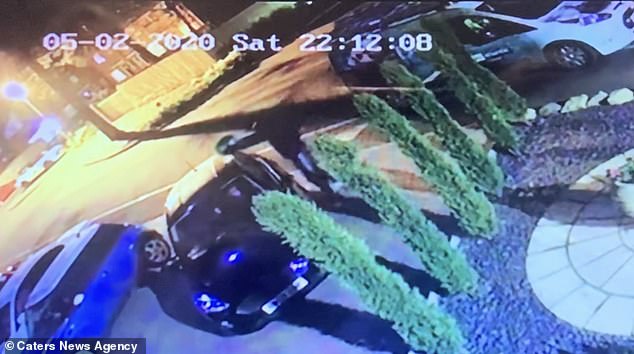 The CCTV footage shows the moment Mrs Cleaver’s car was doused in petrol at about 10.10pm

‘As we looked from our glass panels to the front door, everything was just bright orange. My husband just said ‘there is a fire outside’.

‘We just thought it could have been over the road, we didn’t expect what we saw when we opened the door.

‘The van was parked on the pavement outside our house and my car was parked on our driveway and they had both turned into balls of fire. It was so scary, everything happened so quickly. 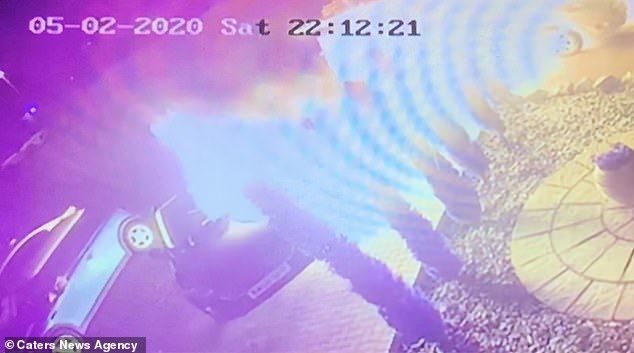 ‘Because both cars were so close to the house we were worried they were going to explode- we were trapped, we had to go and wait for the police in our back garden.

‘We don’t have any grudges, we just go to work and come home, we don’t go out much, we are just a normal family and we keep ourselves to ourselves.

‘We are just trying our best to stay here and hope that the police will find someone. We have never had police involvement in anything, I had never had to ring 999 before.

‘Thankfully the fire crew were here within minutes and they were just fab. With people realising it was Darcie’s birthday shortly after the attack people really were kind. 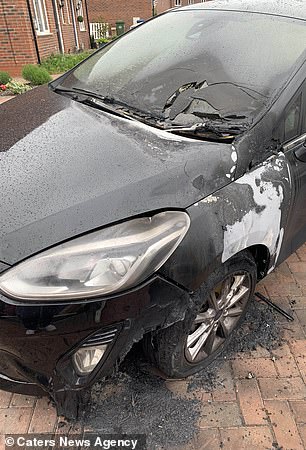 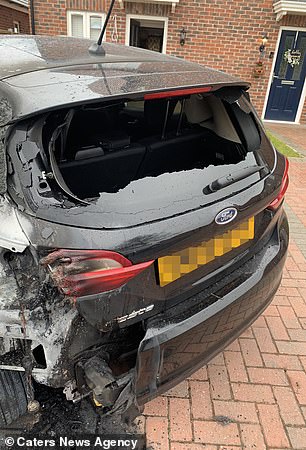 ‘All I want is for this to be solved and I want to know what on earth we’ve done so bad to make someone that angry.

‘We just keep thinking if they are going to come back – it’s a target against us, we just don’t know why. ‘

Mrs Cleaver’s brother, Adam Neale, has set up a GoFundMe page to support the family and help raise funds so Mrs Cleaver was able to get to work.

He said: ‘I don’t know who could have done this, they are just an average, normal family, they are not involved in anything stupid.’