Palm Beach County judge Leonard Hanser initially said he planned to watch the Robert Kraft ‘rub and tug’ surveillance footage in a closed court room with paper placed over the windows so nobody could peak in.

Hanser changed his mind, however, amid media objections that closing a court was a highly unusual move.

Lawyers for various outsets argued that reporters had a constitutional right to be present and that they should able to view the footage but not record or take photographs.

It became a moot point though as all sides agreed Hanser was within his rights to watch it ‘in camera’, in other words privately in his chambers.

Hanser had prior to today’s hearing already ruled that the ’embarrassing’ footage should not be made public until a jury is seated, a plea agreement is reached or the state relinquishes its case.

The motion to suppress will continue next Tuesday and should be decided upon in a written opinion by Wednesday, he said. 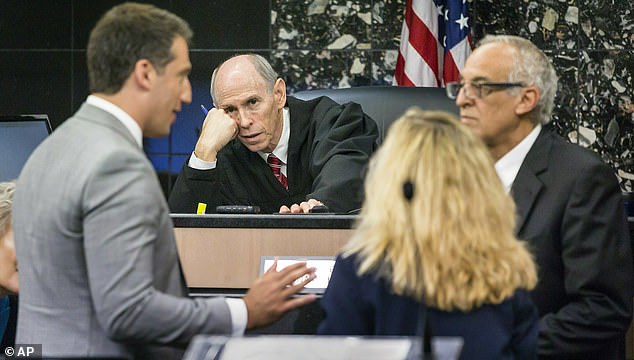 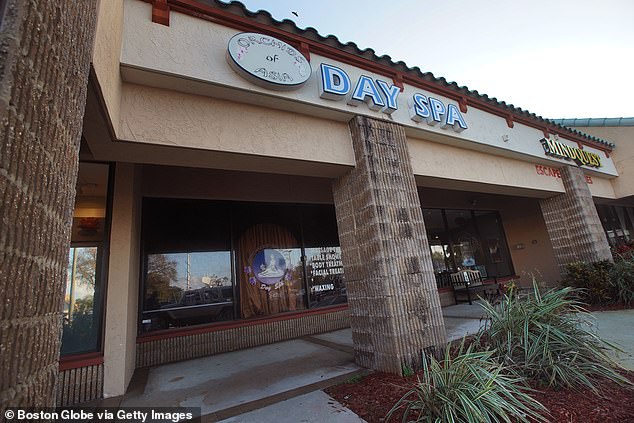 This is the spa where Kraft allegedly received sex acts. He pleaded not guilty last month after he was charged in the sting targeting several Florida massage parlors, including Orchids of Asia in Jupiter (above)

Kraft’s lawyers said today in court that police violated his federal and state rights when they faked a bomb scare and rigged up secret cameras to catch him paying a spa worker for a ‘rub and tug’.

Cops in Jupiter, Florida created a suspicious package and left it outside a nearby business despite admitting it could be ‘scary’ for anyone caught up in the ruse.

When the spa workers left the building officers then slipped inside to drill holes in ceiling panels to fit secret devices to film employees and customers for ‘five days, 24 hours a day’.

They say the ‘sneak and peak’ warrant used to gain graphic video evidence of Kraft and other unsuspecting patrons at the Orchids of Asia Day Spa was unlawful and overblown for a misdemeanor crime.

Prosecutors insist, however, that the 77-year-old mogul owner had no right to privacy in a business he didn’t own – especially in one he was committing a crime.

Jupiter Police investigated Orchids of Asia as part of a Florida-wide probe into alleged prostitution and human trafficking that saw 10 spas shuttered between Palm Beach and Orlando and 300 men arrested, including Kraft.

The cop in charge of the Robert Kraft surveillance operation said his investigators didn’t waste time monitoring innocent behavior – because they were only interested in ‘happy endings’.

Jupiter Detective Andrew Sharp was grilled over the legal basis for obtaining the ‘intrusive’ sneak and peak warrant that authorized five secret cameras and 120 hours of surveillance.

Kraft attorney’s Alex Spiro argued that in the absence of any specific Florida law, both the Federal statutes mentioned in the Orchids of Asia warrant were irrelevant to prostitution cases.

Spiro then demanded to know what steps were used for so called ‘minimization’ to ensure the cameras didn’t record innocent people.

‘If there was a time where we believed that a criminal act did not occur or was not going to occur, we changed the camera view,’ Sharp responded.

‘So, for example, if someone walked into a room we would monitor that camera and watch towards the end because what we were looking for was, in fact, quote, happy endings.’

Kraft’s lawyers continued their attempt Friday afternoon to persuade Palm Beach County judge Leonard Hanser to strike out and seal graphic video of the NFL boss allegedly paying for a ‘rub and tug’.

The court heard Sharp asked Karen Herzog, an inspector from the Florida Department of Health, to stage a routine inspection of the raunchy business last November.

While Herzog was inside, an employee threw out trash that detectives then gathered up and had tested positively for sexual fluids.

Herzog also took photos of a fridge packed with food – pictures exclusively revealed last month by DailyMail.com – and advised investigators that workers could be living inside, the court heard.

Spiro put it to Sharp, however, that there was a similar amount of food in the Jupiter Police Department’s own fridge and it did not mean officers were living there.

He suggested that cops had a multitude of investigatory techniques they could have exhausted, including using undercover officers, without resorting to cameras.

But Sharp said an undercover officer would likely have had to strip off and wait until his genitals were touched to successfully establish a prostitution offense.

‘I don’t want my undercover to go in and be in a situation where he has to commit a crime in order for the investigation to be successful,’ he told the court. 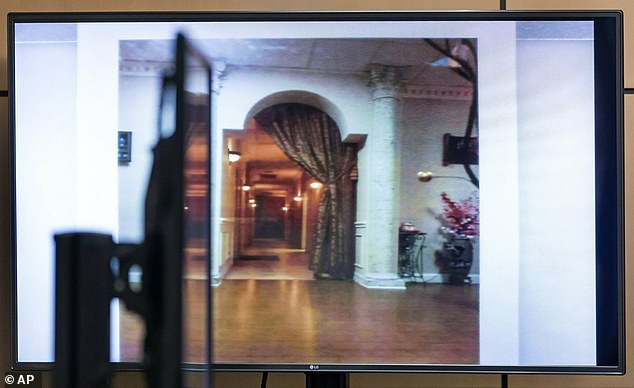 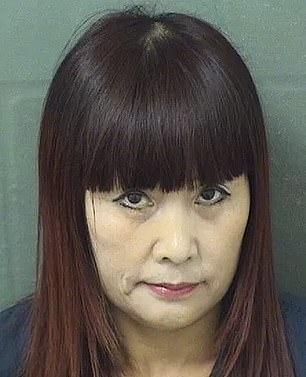 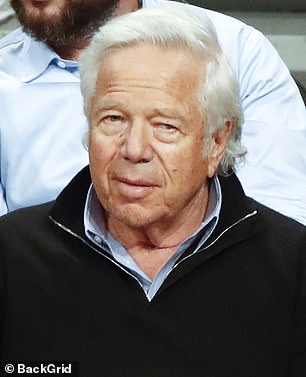 Misses and misdemeanors: Mingbi Shen (left in mugshot) was booked on one count of deriving support from prostitution and eight counts of offering to commit prostitution after allegedly performing a ‘rub’ and ‘tug’ on Kraft 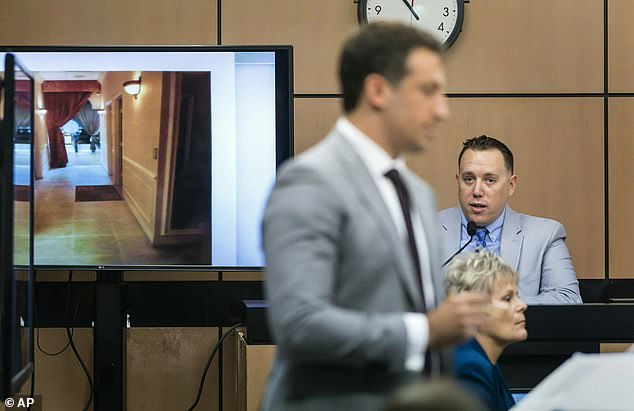 Sharp testified that he began exterior surveillance after a tip from the neighboring Martin County Sheriff’s Department that the business was offering illicit ‘rub and tug’ sex acts.

He told the court he began a six-day exterior surveillance operation and saw multiple men go inside – but only two women.

‘There was one evening where a group of approximately eight males got off a golf cart and walked into the establishment,’ the officer told the court.

‘One came back outside and did a sort of, I’ll use the analogy here, a ‘touchdown Jesus’, raising his arms.

‘So at that point I understood that this was not just a regular massage parlor but one that was an illicit massage businesses.’

Sharp applied for a sneak and peak warrant from Palm Beach County circuit judge Howard Coates on January 15 to install secret cameras in the spa.

He argued that the alternative – going in undercover, posing as customers – was too ‘dangerous’ and could compromise the investigation as officers might have to strip off or receive sex acts themselves.

Coates signed off the warrant contingent on the ‘silent, video-only’ feed only being accessible to investigators and that no filming would take place in bathrooms, kitchens or bedrooms.

Two days later officers used a ‘tactical ruse’ to lure the employees outside to the parking lot as they secretly installed cameras inside the single story business. 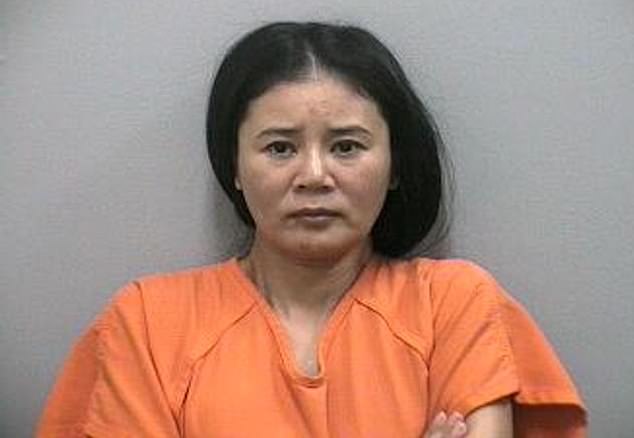 Kraft allegedly received hand stimulation from 45-year-old spa manager Lei Wang (pictured) and Mingbi Shen, paying them each with a $100 bill. Neither women is believed to be a victim of human trafficking and both were charged

Cross examined today by Kraft’s lawyer Alex Spiro, Sharp said he suspected several spa workers were living inside the building and he needed a sure-fire way to get them out.

‘You told both the spa and the neighboring businesses that there was a suspicious package. Right?’ asked Spiro, whose high-profile clients have included Jay-Z, Mick Jagger and former Patriots star turned murderer, Aaron Hernandez.

‘I knew from surveillance and from previous intelligence gathering that there were women inside of that spa that I needed to get out and in order to do that I developed at tactical ruse,’ replied the officer.

Sharp told the court ‘detectives place something in front of one of the businesses at around 10pm’ and conceded that one business, a pizza restaurant, was still open.

‘And do you have any concern in using a ruse that involves scaring people about a suspicious package or bomb when operating and doing an operation?’ Spiro asked him.

Sharp said he considered he could fake a gas leak but the fire department declined to get involved.

‘I did consider that this would be something that could be scary as you put it,’ he said.

Sharp refuted suggestions his tactics were overblown for a prostitution investigation saying he needed evidence of a felony so he could shut the spa down.

A second Kraft defense attorney, Jack Goldberger, had earlier told the court that the surveillance footage should be struck out, adding: ‘We think the whole warrant is unlawful.’ 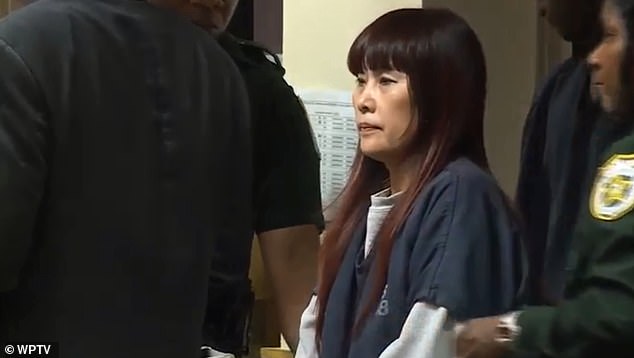 Jailed: Mingbi Chen was the Orchids of Asia employee filmed performing a manual sex act on Robert Kraft in January 19 (above in court on Tuesday)

Prosecutors argued that Kraft had zero expectation of privacy in a public spa.

‘An individual who is in a business establishment with no ties to that establishment, much less there to engage in a crime, has no expectation of privacy,’ Assistant State’s Attorney Greg Kridos countered.

Kraft is alleged to have made the first of two visits to the spa on January 19, when it is alleged he was videotaped handing over cash at the front desk before being pleasured by two women in a massage room. 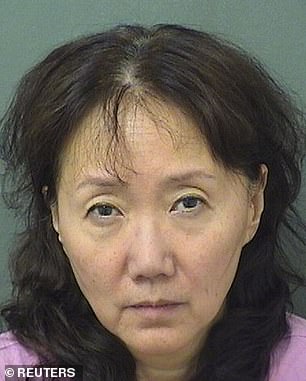 The Patriots owner – who has a winter residence in nearby Palm Beach and is worth $6 billion – returned the next morning and was allegedly filmed receiving oral sex, according to charging documents.

Cops confirmed Kraft’s identity after he left the spa in a chauffeur-driven white Bentley and officers used a traffic stop to pull him over.

A new motion filed overnight Thursday by prosecutors revealed that the sports mogul flashed one of his Super Bowl rings and asked one of the cops if he was a Dolphins fan.

‘He said the Patriots were playing the Chiefs,’ prosecutors wrote, an apparent reference to New England playing Kansas in January’s AFC title game.

The NFL mogul was charged in late February with two misdemeanor charges for soliciting another to commit prostitution.

His lawyers argue that the charges should be thrown out because using surveillance cameras to prosecute misdemeanor crimes violated constitutional privacy protections.

They say investigates had more than enough evidence of prostitution from semen-covered towels pulled from the spa’s trash as well as confessions from some of the patrons.

Florida law states that law enforcement can only make secret recordings when investigating serious felonies and neither Kraft, nor the 24 other men charged over the Orchids of Asia sting, are charged with felonies.

Authorities believed Orchids of Asia and four other Florida spas were involved in human trafficking by recruiting women from China for sexual exploitation who were made to eat and sleep in the back of the businesses.

However it is not believed that any of the arrested men, including Kraft, knew that the women were alleged trafficking victims and no trafficking charges were ever filed.

‘Law enforcement had no basis to suspect anything more than a run-of-the-mill misdemeanor that has never been understood, in any corner of the United States, to warrant the eye-popping invasions that occurred here,’ Goldberger said in previous filing.

‘Because we do not live in a police state and our government answers to the rule of law, suppression of the illegally-obtained evidence is the correct and essential remedy.’

Kraft’s lawyers also applied for a protective order seeking to block the eventual release of the potentially embarrassing footage to the public under Florida’s sunshine laws.

Judge Hanser agreed last week that it not be made public until a jury is seated, a plea agreement is reached or the state relinquishes its case.

The video became all the more contentious this week when The Blast said someone had offered it to them for sale and allowed their reporters to view a short clip.

A different judge, Joseph Marx, agreed at an emergency hearing Tuesday that attorneys for Orchids of Asia day spa owner Hua Zhang and therapist Lei Wang could subpoena the gossip site for information regarding their source.

Marx said there was insufficient proof to issue sanctions against police prosecutors or police for the apparent leak but demanded proof that the footage is secure.

Kraft has pleaded not guilty but nonetheless said in a statement last month that he was ‘truly sorry’.

‘I know I have hurt and disappointed my family, my close friends, my co-workers, our fans and many others who rightfully hold me to a higher standard,’ he added.

Legal experts say first time solicitation offenders are usually eligible for a diversion program where they pay a $5,000 fine, perform 100 hours of community service and attend classes to learn about the perils of prostitution.